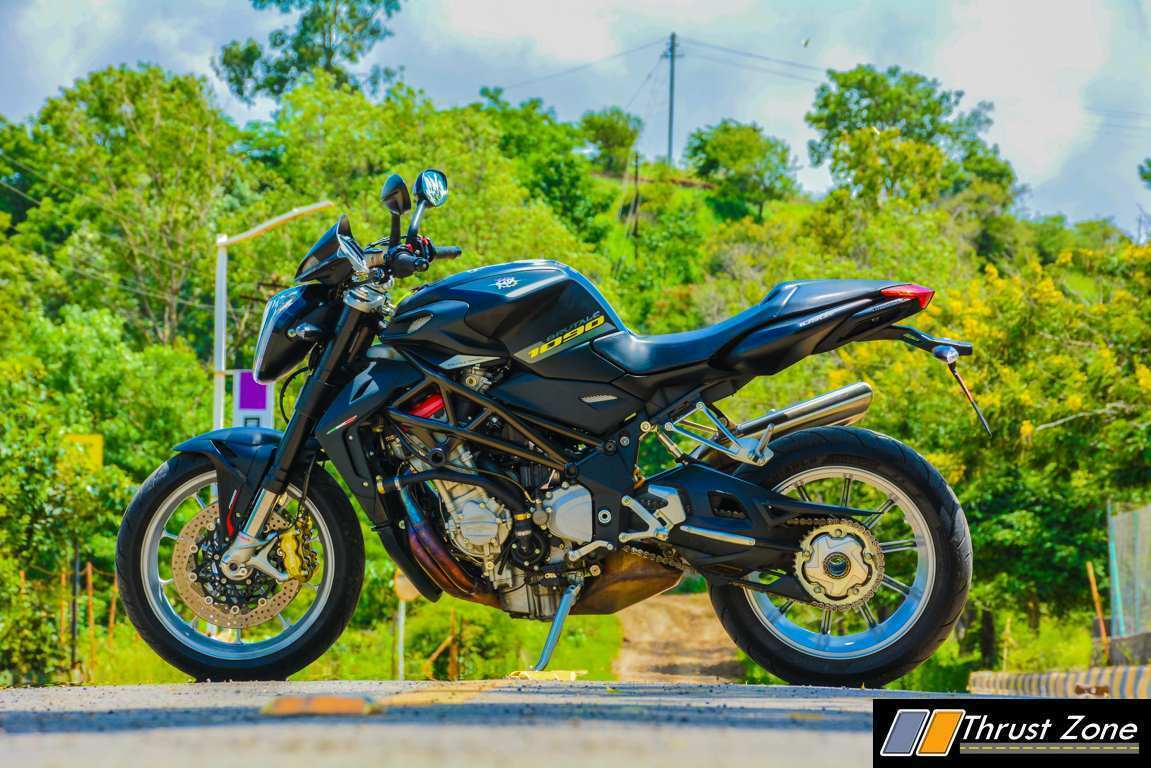 2016 MV Agusta Brutale 1090 turns out to be the most accessible, easy to live with super naked in the category with enough power for our roads

If you think about it, Italy isn’t one of the biggest country in the world. It belongs to the largest continents which does business around the world. However, Italy has the most amount of factory which churn out exotic machines. Right from Pagani, To Ferrari when it comes to cars. There are motorcycle manufacturer such as Ducati all the way to Moto Morini. However, there has been one brand which has the highest amount of lime light. MV Agusta. The brand has a premium positioning like no other in the entire world as we speak. The brand came to light when it churned out race motorcycles for the road. The styling despite race bred motorcycle was the highlight of the package. All thanks to the famous designer Massimo Tamburini who made this possible.

MV Agusta came to India and launched almost their entire line up . MV Agusta has tied up with Kinetic motors, a name in the industry which has been connected with various brands in the past too. Both parties have invested and still bought bikes at relatively good price tags. We just ended up sampling one of them and cannot get over it despite it has been a week. We got to taste the naked Brutale 1090 and we spend an entire day with it clocking almost 300 kms to tell you what it is like. Does it have the panache to take on its rival that we tested as well in the past? Let’s find out! 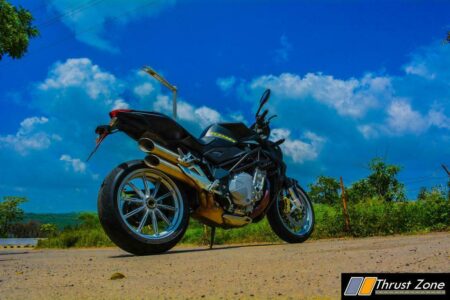 Design
I did end up seeing the motorcycle in person some time back in the year and then saw it again, stared at it in the pictures and finally saw it in flesh. Honestly, i wasn’t expecting to be blow away. The styling started to grow on me as we started shooting it. We never shot a bike this photogenic till date. The Brutale 1090 is one of the most stunning bikes ever made is what we believe now. The way every single panel and thing has been crafted on this was ahead of its time when it came. The wheels dominate most of the package and i gives it immense presence. The black and grey color combination is also a factor that impresses.

The multispoke wheels, with the single sided swing arm just blows you away. The artistic exhaust pipes are clearly 17’th century musical instruments. The large tank which is functional and form and has modern touches and lemon color tiny graphics help it further stand out in the crowd. The oval headlights and the fairing around it looks just right. The LED brows at the front will sure look naughty at night. 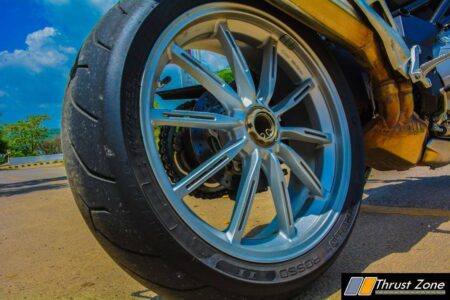 Art takes some time to capture you and it surely did in this case and i can go on and on. The tail-lamps, yet again, look flush and the illumination and design of them are far away from any competitor in the segment. Clearly it is so good as it keeps on growing on you, we could stare at the motorcycle all day along after testing all day long. Now excuse me, its time i changed all my wallpapers on digital devices.

Speedo and Switchgear
Instrument cluster includes the usual tell-tale lights, warning lights, shift light, fuel warning indicator, a fuel gauge and a good old temperature gauge. There is an also a lap time provided as well. The cluster overall looks a bit dated as it still has a analogue tachometer which is a great feature to keep in modern times. The hazard light switch is oddly placed below the meter. Switch gear is traditional European super bike. 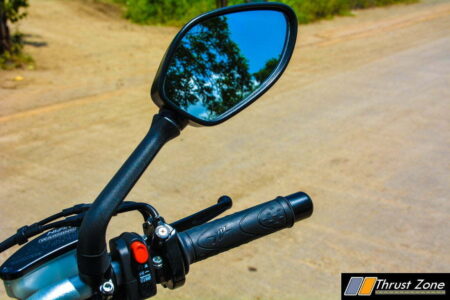 The RH switch gear has a red button which needs to be in outward position and then you click the main starter button. The starter button also acts as a button which gives you access over traction control setting and gives you one single riding mode. Hazard light button on the LH side along with turn indicator buttons and horn button which have their places switched then we are usually used to. Takes some time getting used too. Anyways, who uses a horn when you have four-cylinders singing.

Ergonomics
Ergonomics is a major reason where the Brutale scores. The saddle height is just fine and MV Agusta says its adjustable for all heights. I stand at 6’0 with boots and i was comfortable with the leg room on offer as well. Seats are comfortable and supportive. The tank is large and let’s you hug it as well. Since the foot pegs are set high and you tuck into the tank well. The handlebar also ends up directly coming to your hand as it is raised. 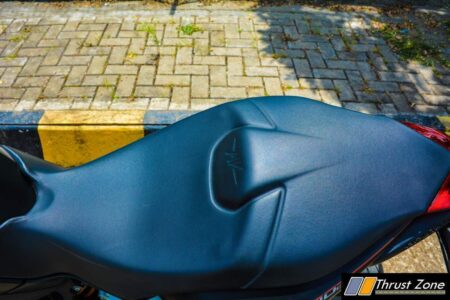 Don’t get us wrong, but this setup we see on almost on all motorcycle such as, KTM and other touring machines. Yes, it is that comfortable. Long rides and lack of wind blast means you can tour on this thing if you wanted to. MV Agusta has got the ergonomics bang on and there is no doubting this part at all. Mirrors can be a bit small for larger rider, but it does the job well for all other type of riders. 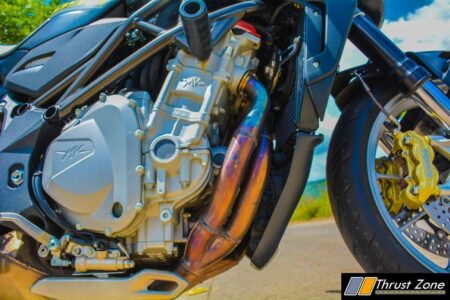 Engine and Gearbox
World over almost every manufacturer has refined their four-cylinder engines to the very max. However, the Italians do things differently. As soon as you start the motor you can still hear the loud valves. Uncanny in today’s time when it comes to four-cylinder motors. This format is usually seen on torquey triples and twins. Mechanical, rumbling exhaust note and yet the smoothness of the four-cylinder make it quite a bespoke thing to ride and hear.

Brutale 1090 makes 144 PS at 10,300 RPM and 158 PS at 11,900 RPM. As you can guess there is power everywhere. Right from 2000 RPM to 12,000 RPM. All of this is thanks to clever gearing and fueling as it doesn’t feel you are out of breadth anytime in the power band. The power delivery yet again is linear all throughout without any peaks. The relentless nature of the power band coupled with a refined motor that sounds completely exotic and Italian is a rare combinations that wakes up your sense even if you are the dullest person on planet Earth. Redline in every gear or just twist the wrist in any gear, you feel you are in the power band all the time. 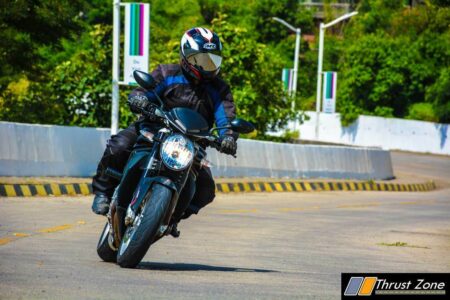 There isn’t any form of delay and the Brutale keeps on pulling and pulling so smoothly and quickly that you start back of the throttle to keep things safe. Savage performance is thanks to wet weight of something under 200 kgs. NVH levels are good enough and we did not encounter much heat from the engine in city either. Clutch is light and gearbox is smooth to operate as well. We just wish a ride by wire system was introduced so that throttle could be smoother at lower RPM’s.

Dynamics
On paper it has the best suspension and brakes one can ask from a fun street-fighter. 50 mm upside forks, Sachs rear monoshock along with single sided swingarm and Brembo brakes at the front with 4 piston and surprisingly 4-piston at the rear as well made by Nissin. We must say that the rear brakes worked really well and front brakes were spot on as well in terms of initial bite and feel. Turn-in the motorcycle and thanks to the softer setup at low speed it twitches. 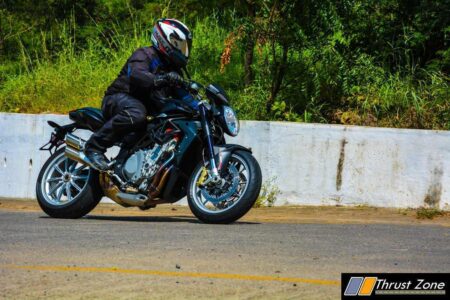 Front-end raked-in, but the entire chassis comes to life when ridden hard and fast. We took slow corners and the bike completely rejected the idea. As we faster, took faster corners and sweepers, it felt as natural as nature. The narrow handlebar which look like they end up replacing the clip-ons also play a major role in this aspect. What can you say now? Pros and cons of a race bred chassis and suspension. The Brutale, despite all of this is nimble in the city and agile in the corners. Tyres also play an important role and the Pirelli Diablo Corsa II tyres work really well. 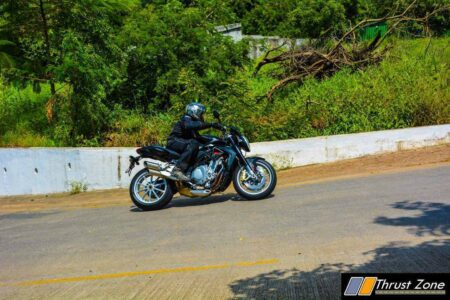 Thanks to the softer setup, it takes bumps quite well and stays planted on our un-even highways. This also helps taking a mid corner bump which won’t completely unsettle you either. All of this and the motorcycle feels tauted, planted and light at the same time is a feat pulled of really well. We can imagine the RR version with better spec materials and more power would be like to ride.

As you can imagine by now, Brutale 1090 is something really special. The design, the practicality, the comfort that it offers along with the brand and racing heritage that it comes with. Brutale is truly a motorcycle that you can cherish if you can get your hands on one of these. However, it is still an expensive proposition. You can get same bikes at a lower price point, but they aren’t even remotely as special as this when it comes even plain riding. 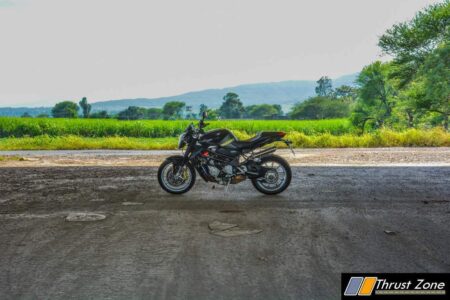 Take this to the track and we think it will be the most rewarding of the lot too. Pricing too, is extremely premium, but then again, you don’t get motorcycle design by the best designer in the world till date. Couple it with the one of a kind four-cylinder, everything seems so surreal with this motorcycle, it is hard to understand if something like this exists as well. We never expected to be blown away and now we are taken back and surrender to this brutal Brutale!