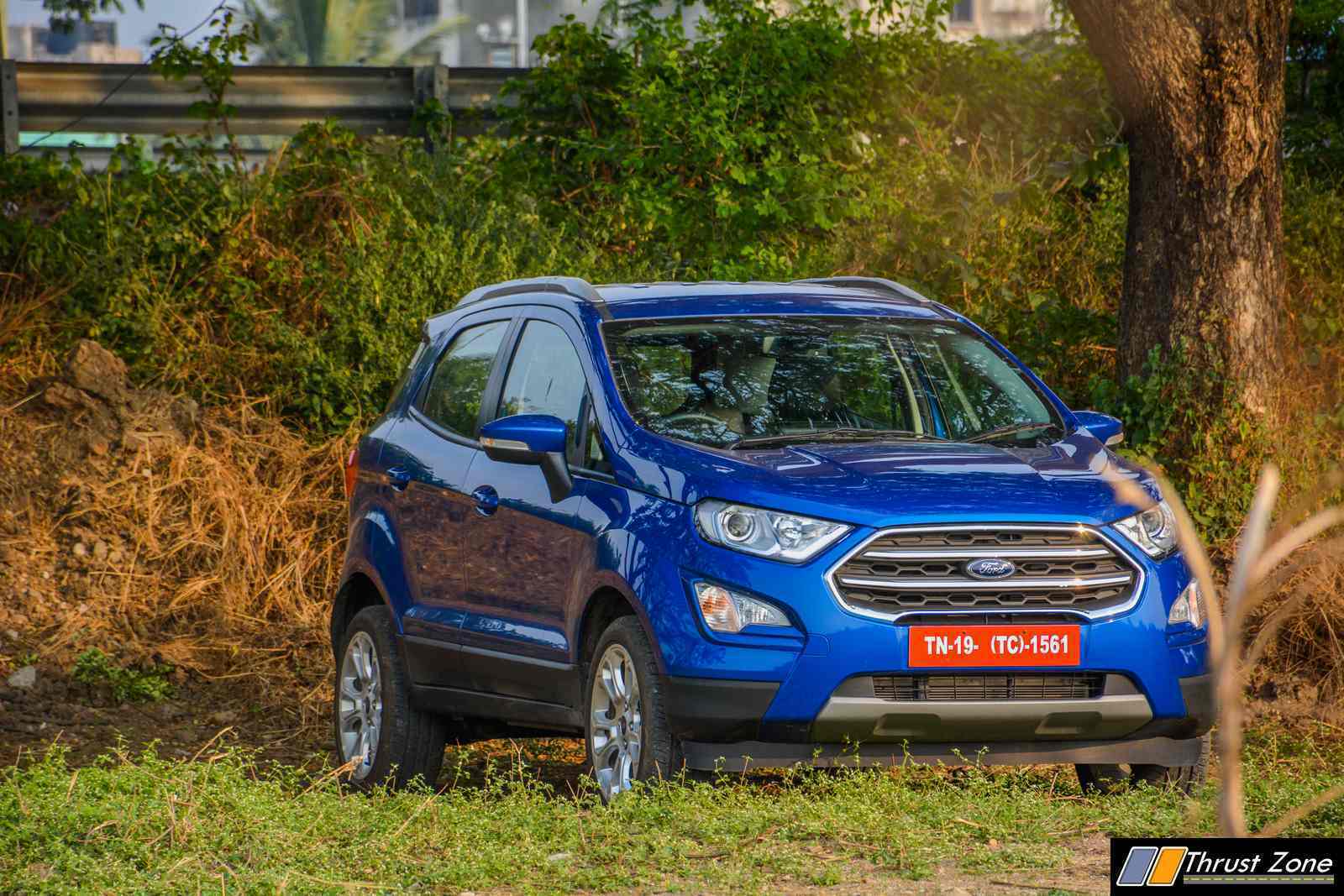 Ford has had an unusual inning in India. It was doing great with its sedans and then it started with hatchbacks and now it is doing it with SUV. There have been many defining points for the company. Launching the first two generation the Figo hatchback and then launching the Ecosport. Ecosport was updated frequently and in the year 2015 was when we test rode it because it had a new diesel engine on offer which made 100 PS of power. Ecosport soldiered on until today when the facelift arrived. The much talked about facelift of the popular vehicle did garner some serious attention. 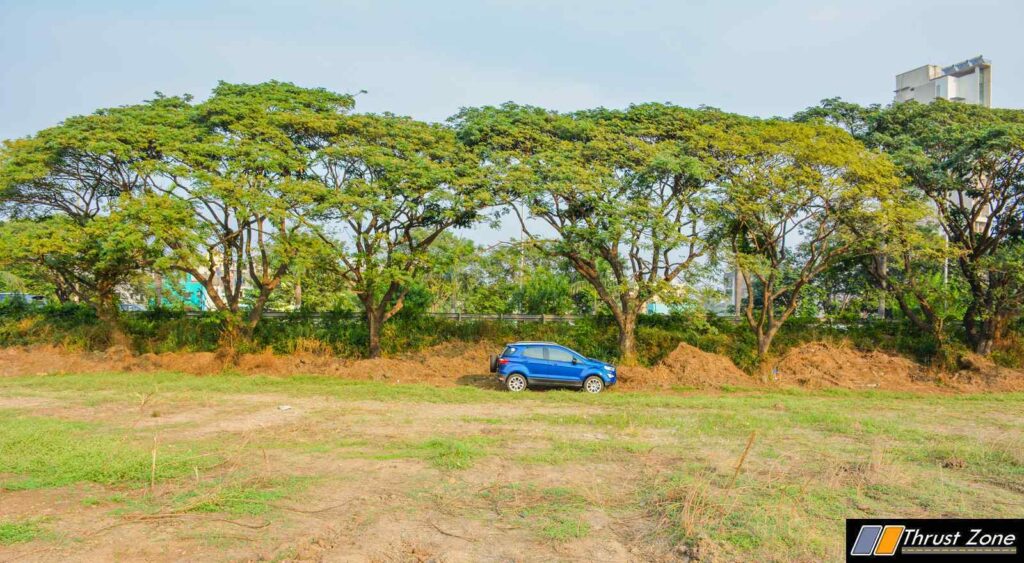 The launch was done with some kitchen sink thrown in because the prices remained unchanged despite a host of changes to the car. All excited, the online sales and booking numbers grew and even today they are growing. Ecosport earlier had little to no competition. Now it has three heavyweights against it. Ford pretty much has done everything to strike the right chord with its customers. Ford has sent us the car for a first impression and we are here to tell you the same. 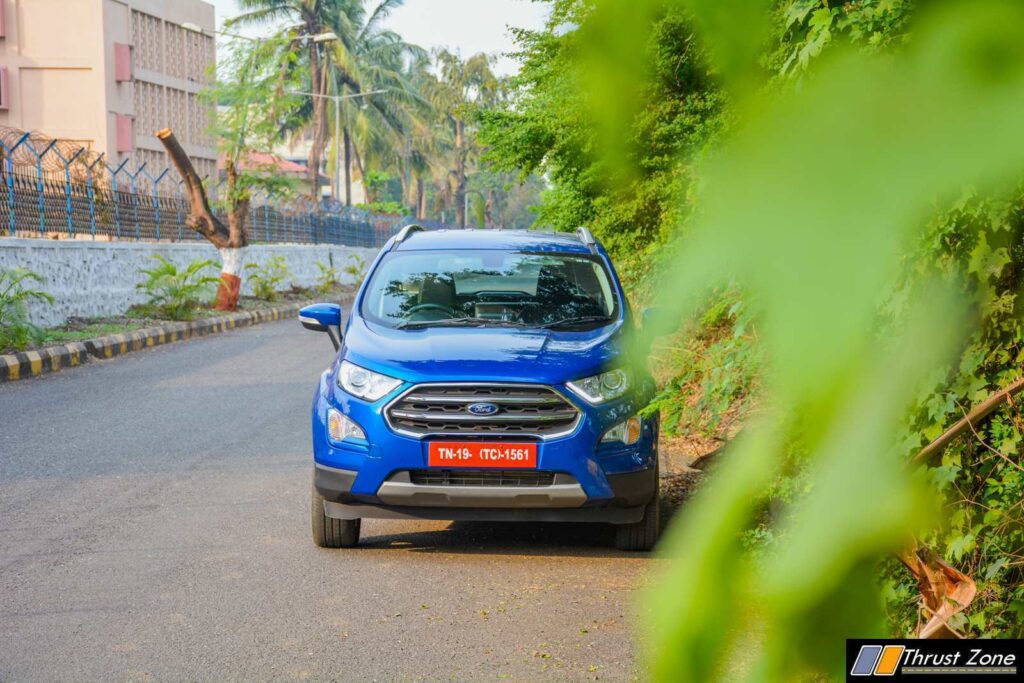 When it comes to the front fascia, there has been a big change. The large chunk three-slat grille has replaced the thin grille. The headlights are more angular and chunky too. The fog lamps have the same touch as they are now more prominent and grab attention. The slight change in bumpers on both ends help it stand out. The side profile remains downright identical but the subtle change to the alloy wheels and the size rising to 17-inch help is stand out. Rear remains the same with a large spare wheel mounted, unlike its international version. The tail-lamps also remain the same. Overall, it continues to look butch with its cladding and stance and now has a modern appeal to it with new coloursInteriors 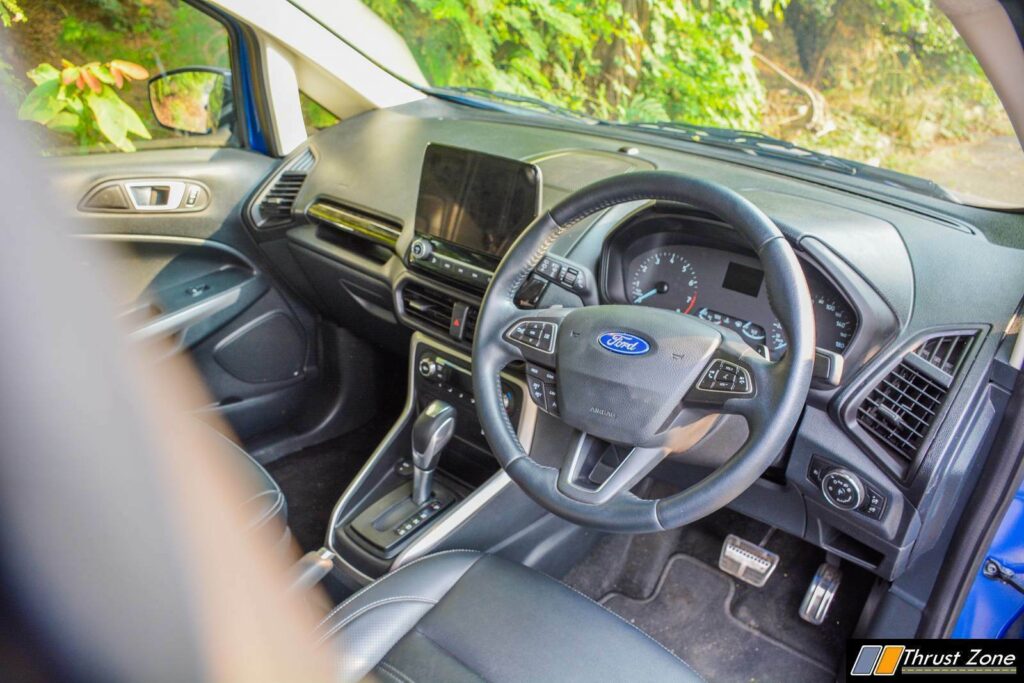 Inside there is a massive change in every area. The instrument cluster is all new with two large dials and a small centre screen in it that displays all the functions it has. The new flat-bottom steering wheel is introduced and it has controls mounted on to it. The centre touch screen is the highlight and is the quickest and intuitive screen seen in this category. 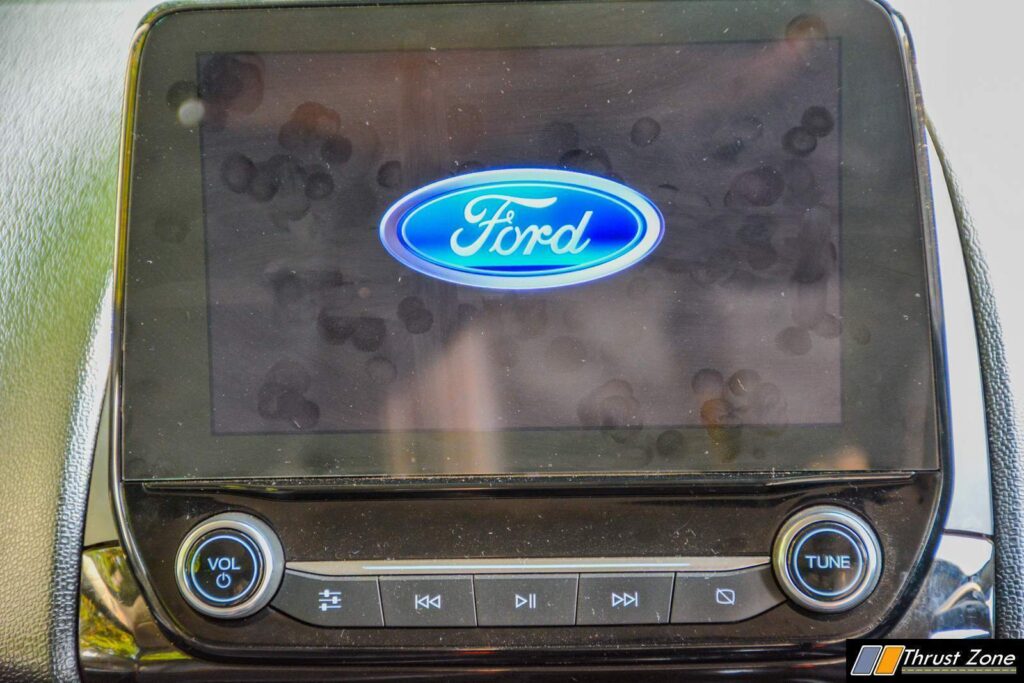 The SYNC 3 system works really well and there all types of connectivity options such as USB, AUX, Bluetooth, Andriod Auto and Apple Car Play. There is space above the glovebox which also has a piano finish ‘handle’ to secure items. Fully electric ORVM, cruise control, TPMS, leather seats, climate control and sporty pedals are on offer. Auto door closing is out of the list though. You also get a start-stop button, keyless entry and go, reversing parking sensor with guidelines, reversing camera is also part of the list. Projector headlamps, prominent LED DRL are also present. 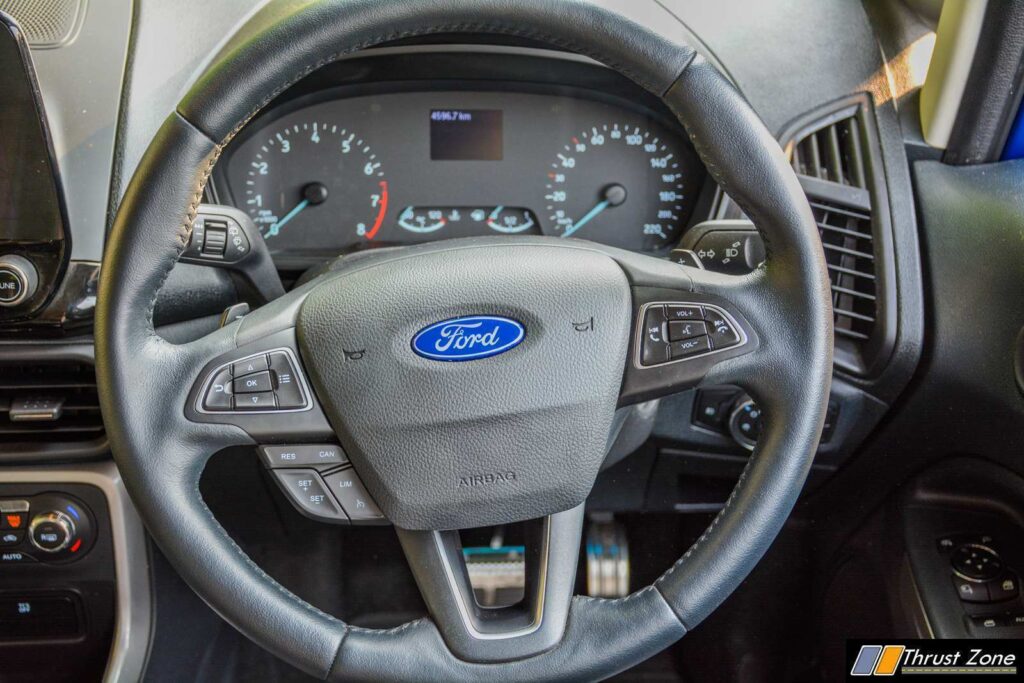 Quality and fit-finish remain good, not great in the Ecosport as before. Also, just about adequate legroom and headroom are on offer. Shoulder room with a fifth passenger is a squeeze and this where the Ecosport has had no changes. Boot space also remains the same which is good for a sub four-meter car but there are the sub-four meter cars which offer more. The sound system continues to be stellar on the Ecosport which good bass on offer. 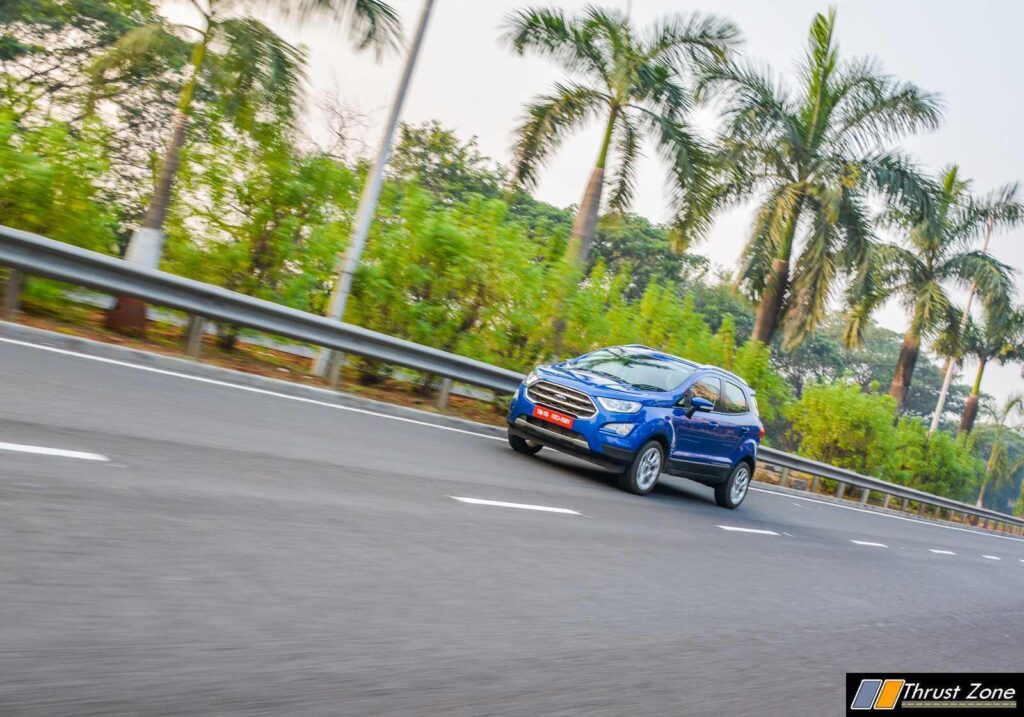 When it comes to the engine, the new Dragon series 1.5 3-cylinder motor was on offer in our test car. DCT has been ditched for a torque converter with paddle shifters. The engine also loses a cylinder when compared to the past. The motor is now more refined and efficient than before. It delivered 9.6 kilometres in our testing. Something which involved hard acceleration and braking along with city and highway run. The revised engine does sound raspier and the 3-cylinder thrum is present. The motor is docile but isn’t flexible in an enthusiastic manner like before. There is enough or more than adequate low-end torque and responses on offer and even the gearbox is tuned in a way to deliver the same. 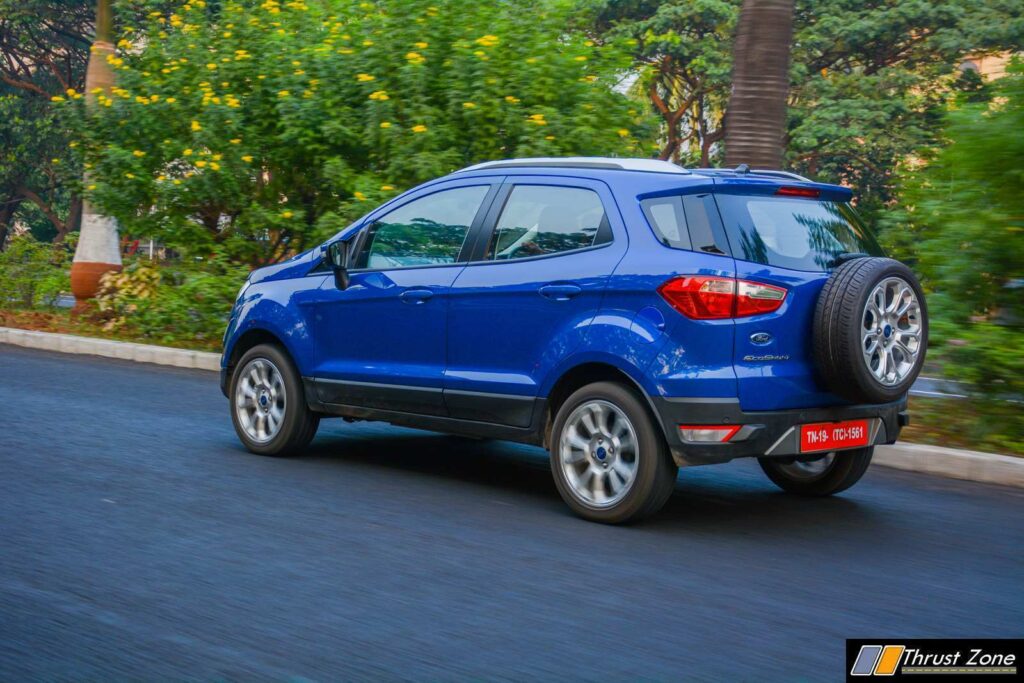 Problem is the mid-range and top-end which isn’t punchy. Squeezing performance once in mid-range takes a little extra time. Taller gearing isn’t too tall to help you get top-end performance either. The car does reach 150 km/hr and that is quite less for a motor which makes 123 PS of power and 150 Nm of torque. The problem with Ecosport has been the power to weight ratio which hasn’t been high thanks to a very high 1200 kgs. A Renault Duster, an SUV segment above weighs 1100 kgs. 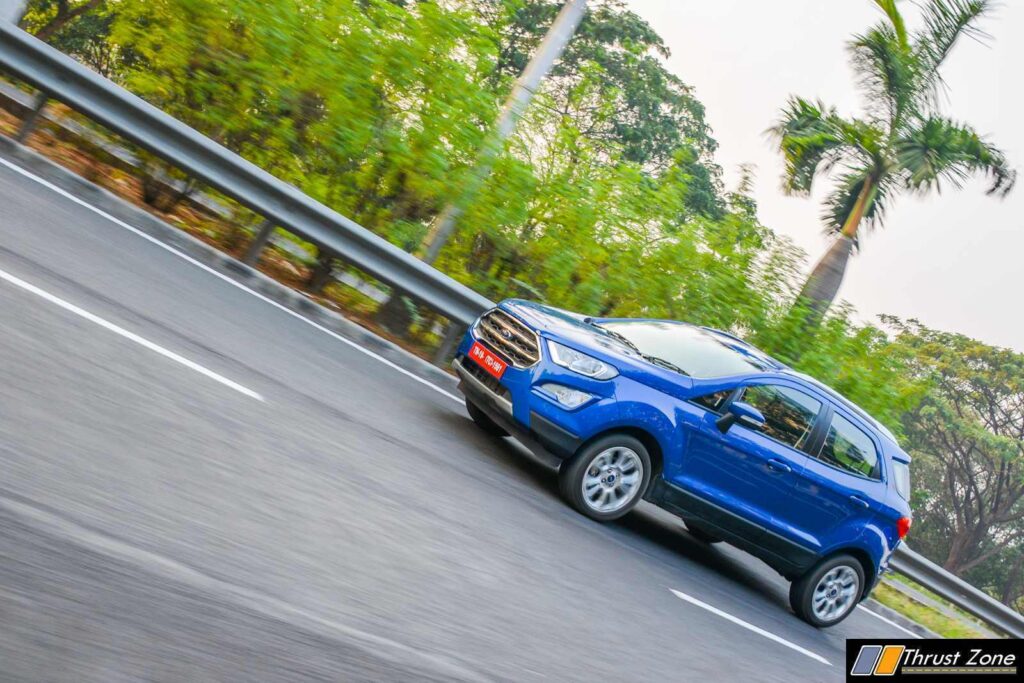 The SUV is one of a kind as it has 17-inch wheels on offer against its rivals which offer 16-inch wheels. The 205 section tyres offer decent grip and the ride quality is good as the underlying stiffness is apparent to a great extent. This helps it tackle bad roads with ease as there is no pitching around. Body roll is well contained but it is present. Brakes are really good with superior stopping power and excellent bite in the pedal. What is not so great is the steering feel which doesn’t match the almost go-kart feel you get from the chassis. 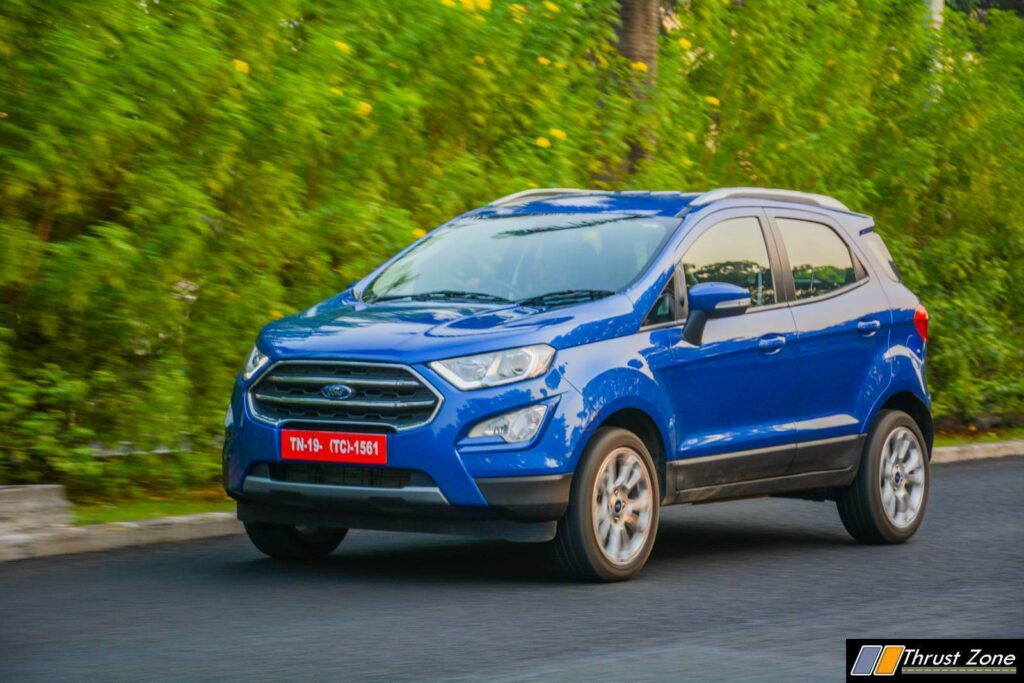 The communication isn’t enough from the wheels to the steering. The precision is there but the lightness along with and the lack of a steering weighing up properly is missed. Ground clearance is ample and we did manage to do a slight bit of off-roading where the approach and departure angle was quite good and nothing scraped in a large pothole that we encountered while going towards a remote location. 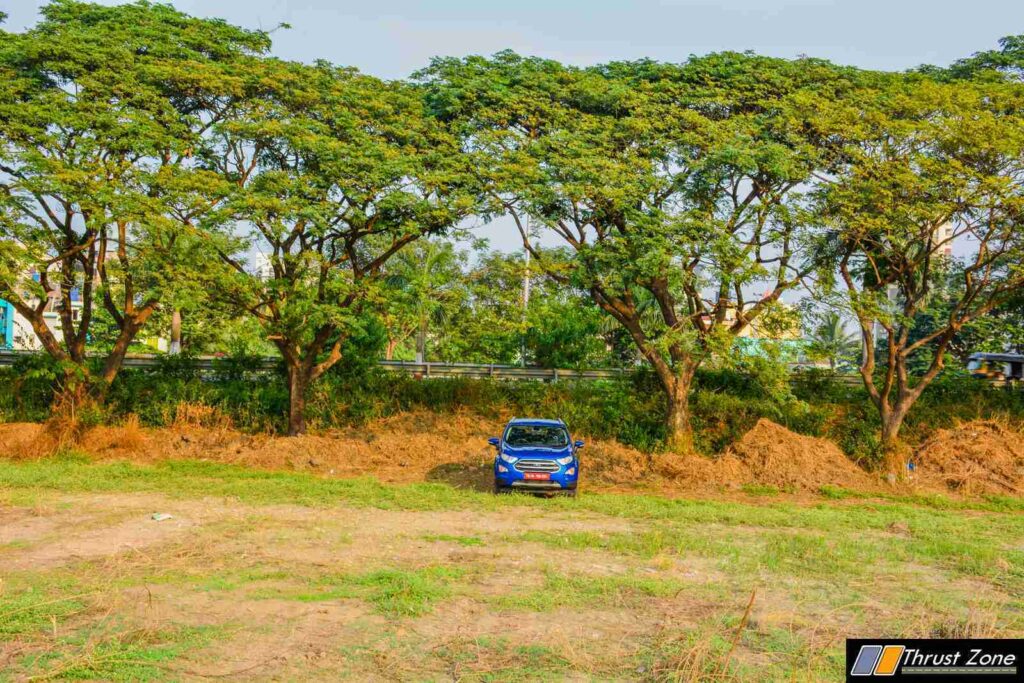 Our first impressions bring back the love we had of the Ecosport in the past when it comes original compact SUV. The ride and handling are exceptionally good and the Ford emphasis on safety and gadget loaded interior makes it a good family car.

The petrol automatic isn’t the enthusiasts choice, but it does get the job done if you want an automatic and your annual mileage isn’t high enough. Price for the petrol automatic is on the higher side but you do get a fully loaded variant with everything you ever want in terms of feature. Ford has kept the prices same as before which is a great thing, to begin with already. 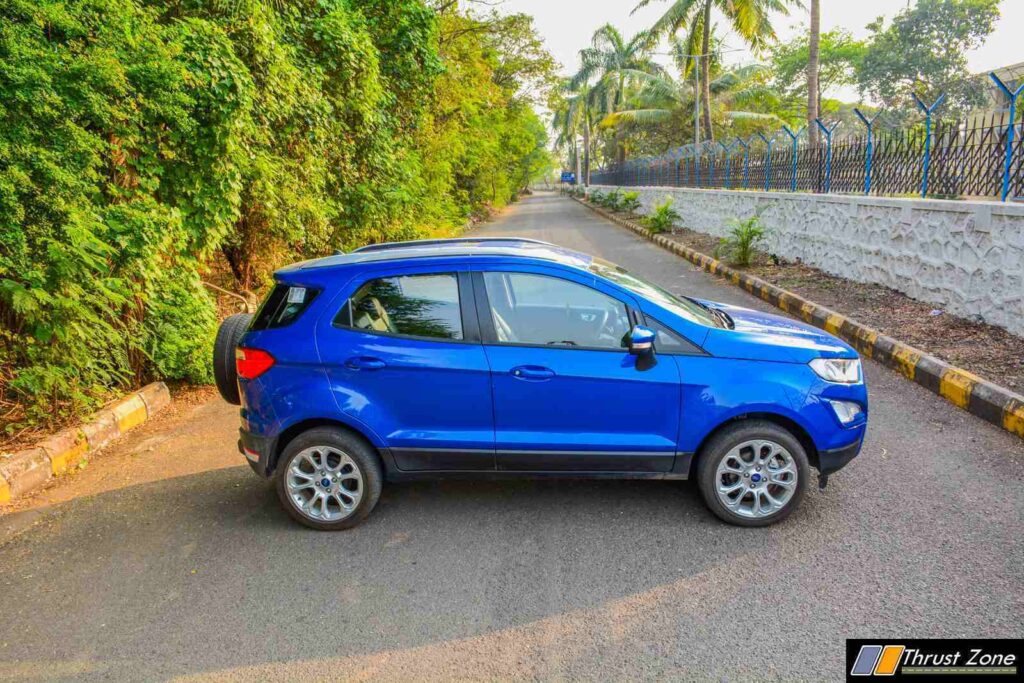 Ford’s continuous and bespoke effort at bringing the cost of owning the car is something now celebrated by most of its customers on a daily basis. Service calculators, child part strategy and showrooms now located in almost all areas help the SUV reach new garages. Ford started this segment and with this well-done package right here, once again, they have not one, but many cards up their sleeves to keep the sales number going amid serious competition.