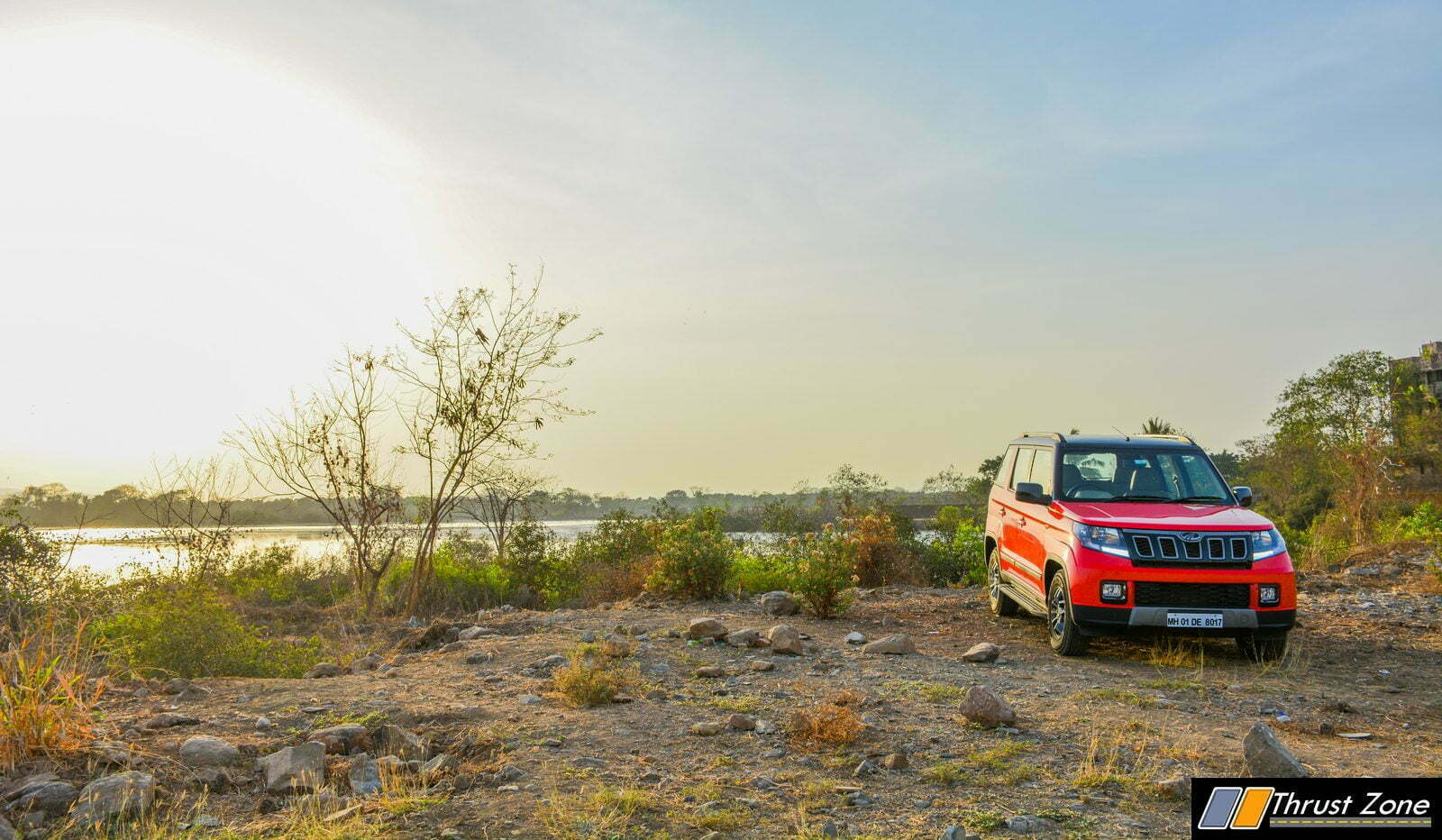 Compact SUV segment in the Indian market is exploding with options. Every manufacturer has responded to this segment except for a few. Mahindra has had many chances at this segment. There has been the Quanto and Nuvosport. However, then came the TUV 300 and XUV 300. TUV 300 had to get a facelift and it does. It is the only SUV in its class with a ladder on frame chassis. 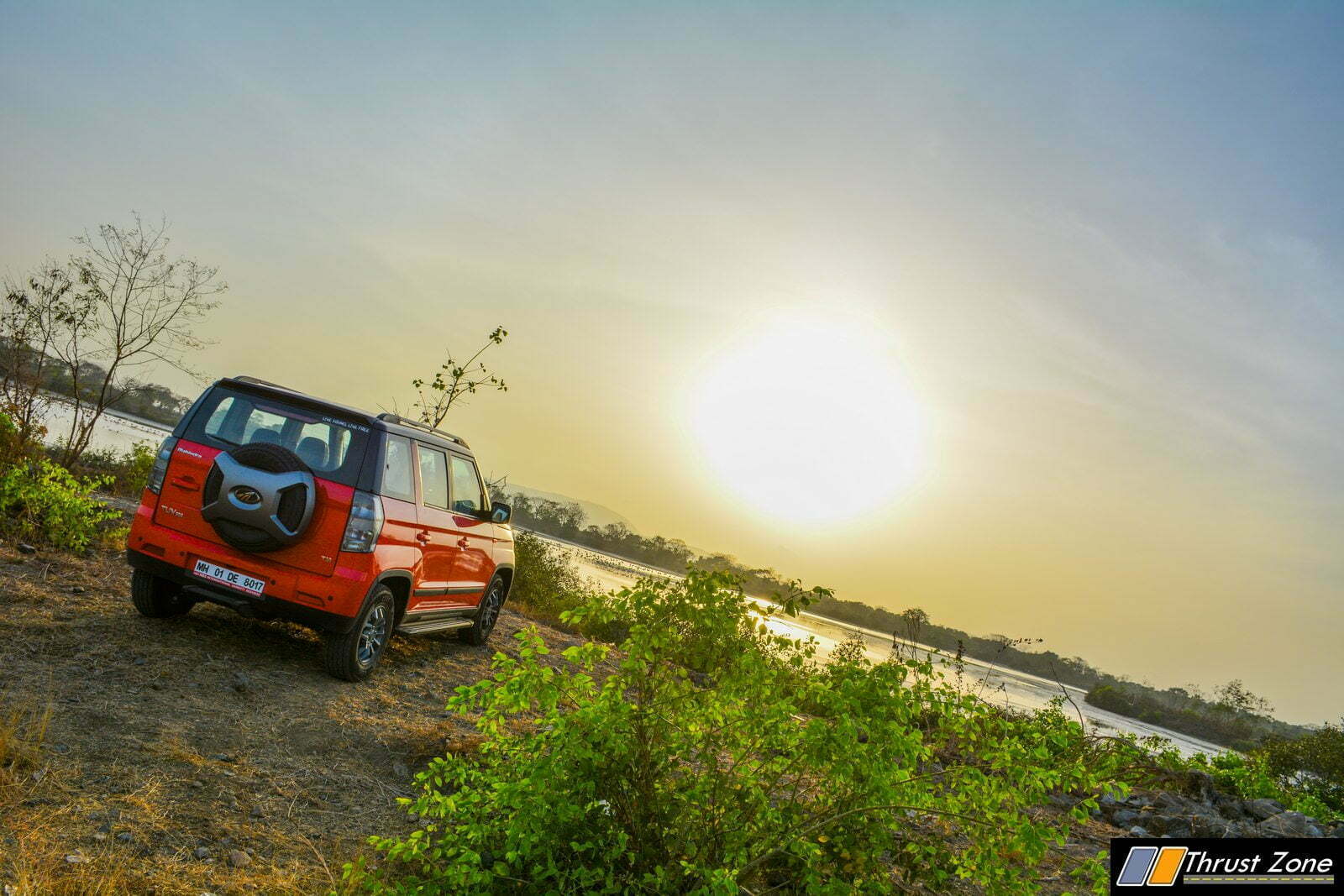 Rest of the SUV’s in this class are all monocoques. TUV 300 has been popular with a certain audience and most of it has to do with the way it looks, what it offers in terms of sheer SUV character which includes a host of things. Let’s find out what they are. 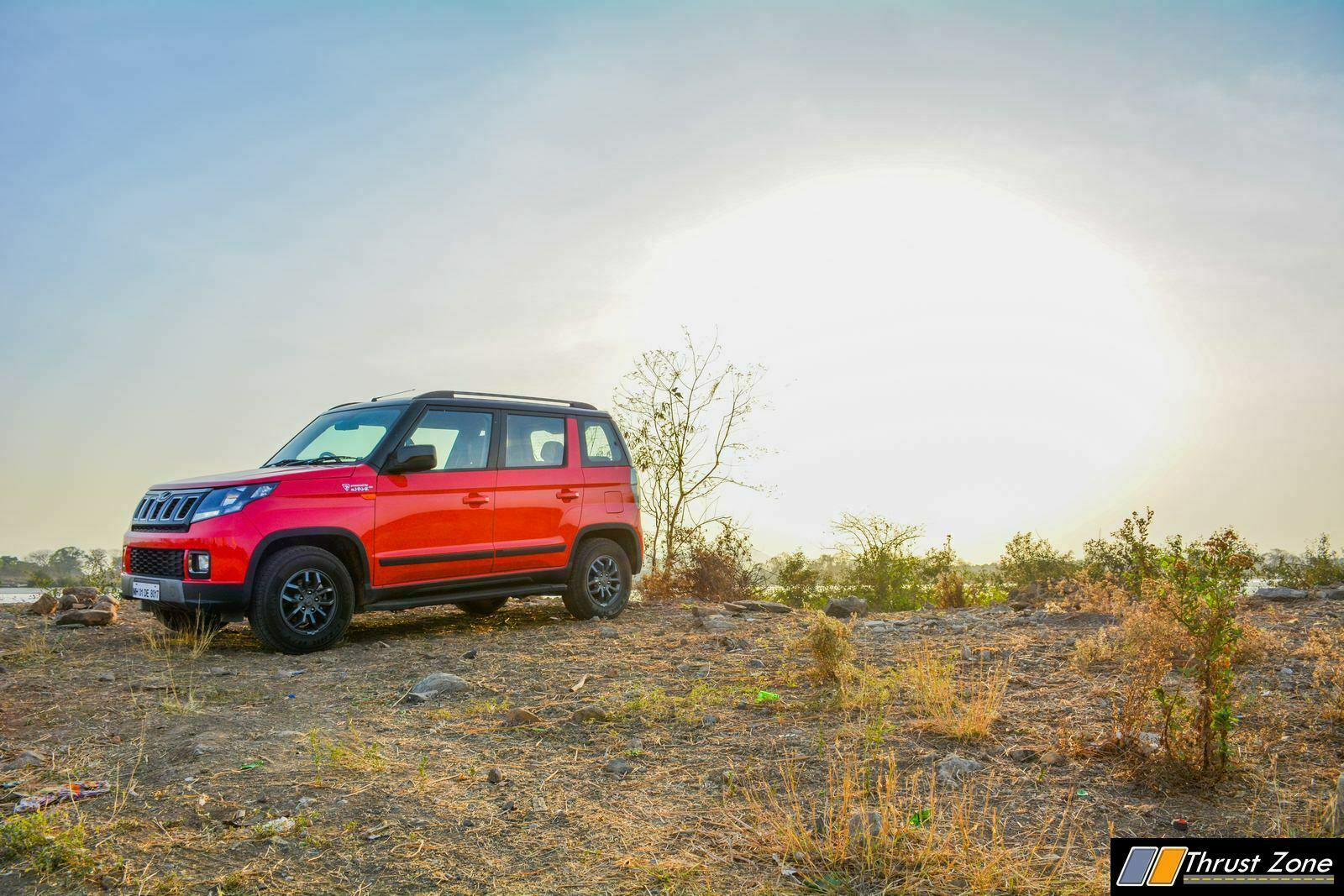 The TUV 300 has been an handsome design since day one despite its boxy proportions. The slightly canted C-Pillar flowing all the way till the front look great. The dual tone scheme of red and black on this car garnered, surprisingly, a lot of attention on the roads. The grey alloy wheels looked great but tiny at the same time for a car that has massive wheel arches. 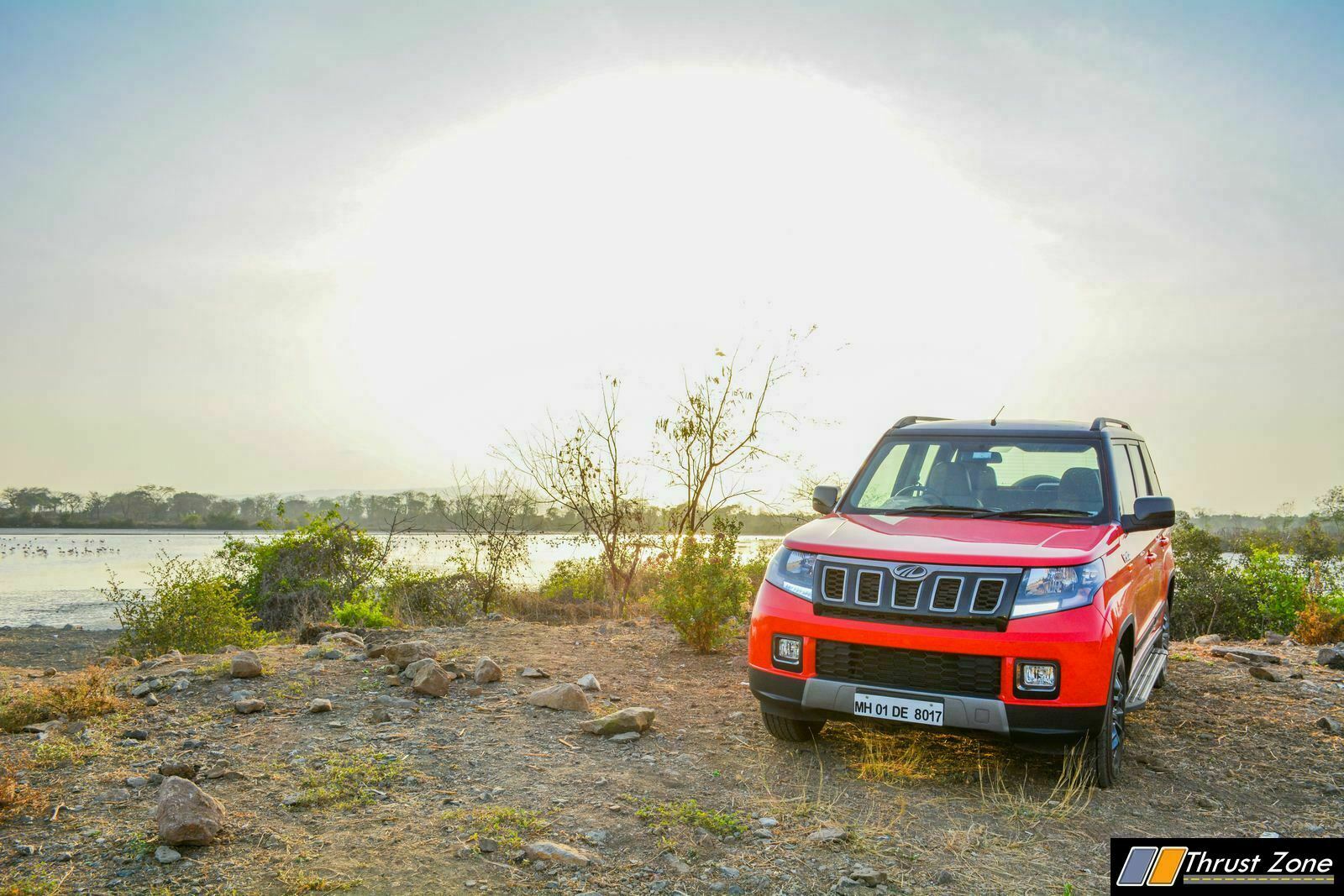 What you get in terms of changes are a new grille with a piano black finish over the slots and chrome bar at the front which reflects sunlight on the highway onto other cars! Test your cars Mahindra, but without camouflage as well. Tail-light lense got clearer and the rear spare tyre has a new cover. Overall, the most SUV looking SUV in the sub four meter segment with its height and cosmetic elements standing out subtly. 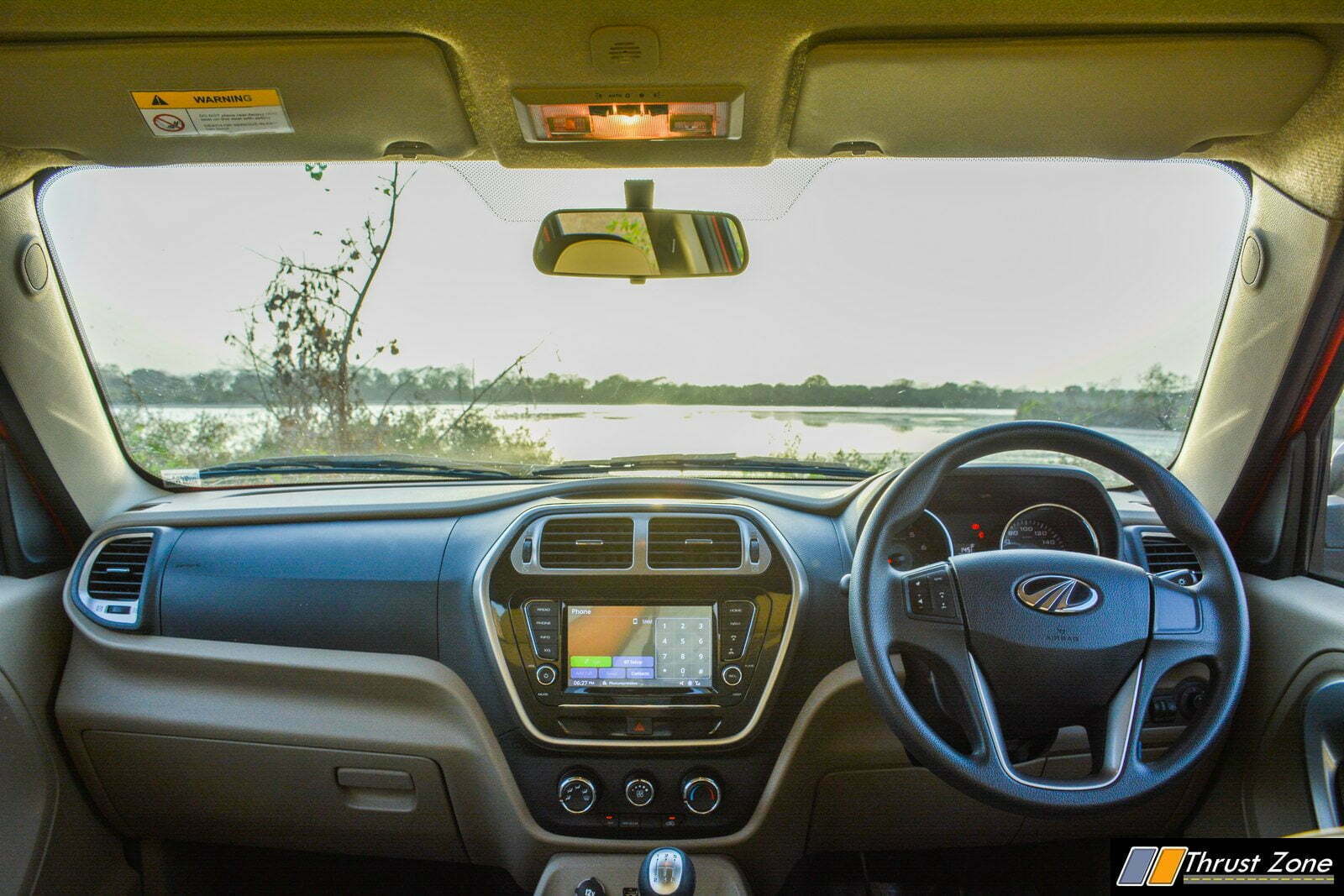 The interior continues to be identical to as before. Plastics are quite good as the cars from Mahindra in rugged department can get. We don’t like the cubby holes below because they don’t accommodate anything properly. The view outside is commanding, you get height adjustable seat and steering which is slightly in your face. There is remote lock and keyless entry, rear wash and wipe, arm-rest for both at the front and steering mounted controls. 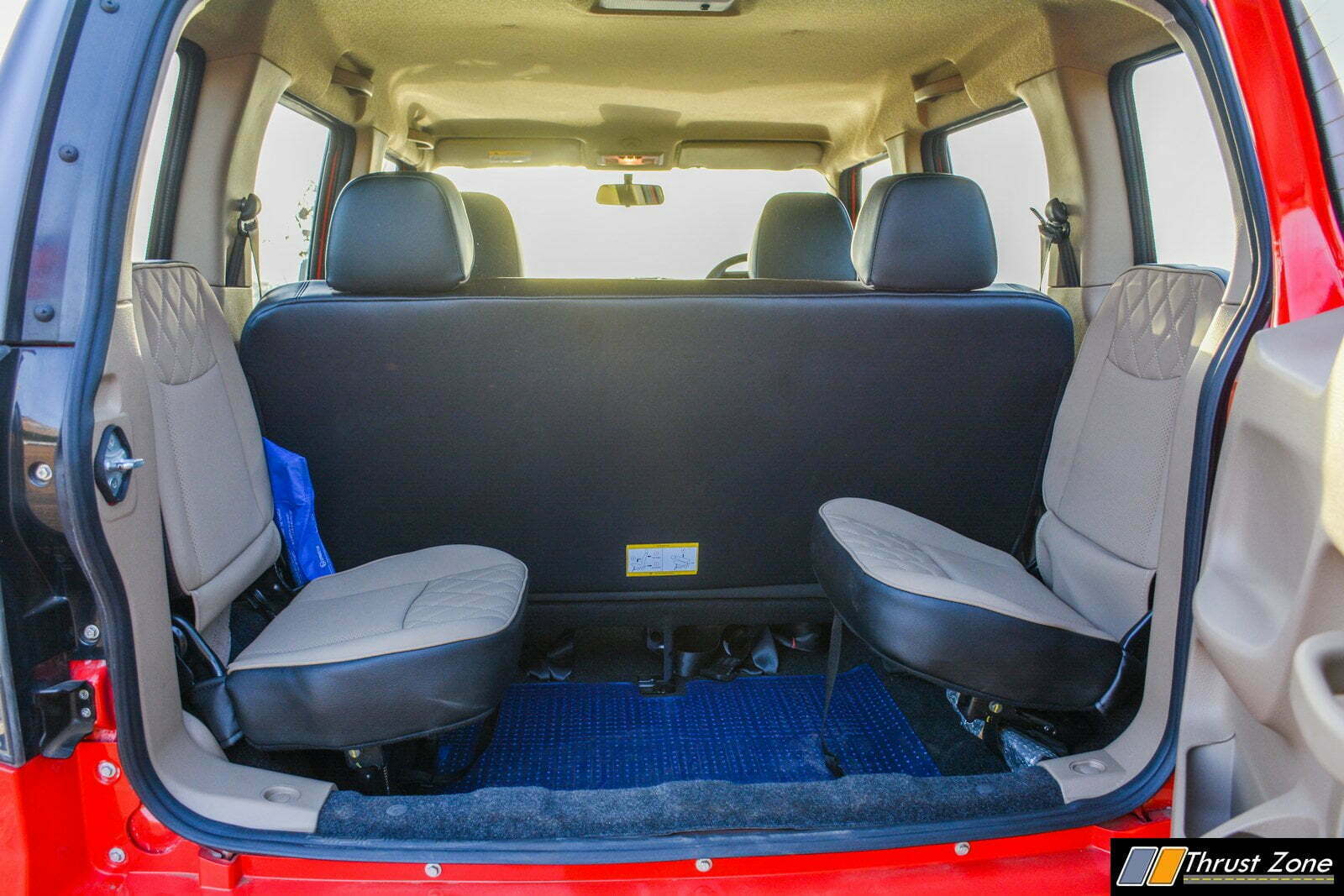 The touch screen system on the other hand is great and is a lift from the larger XUV 500 along with four speakers with a good audio system. It doesn’t get Apple Car play and Android Auto for now. It gets reversing sensors, blue sense app connectivity, camera, fuel economy parameter in the cluster, Bluetooth, aux and USB. Space in the second row is good enough, not generous in terms of leg and knee room but head and shoulder room is adequate. Third row are benches on either side and can be used a boot space as well. What we think could have been a great addition is the cruise control that is missing here as well. 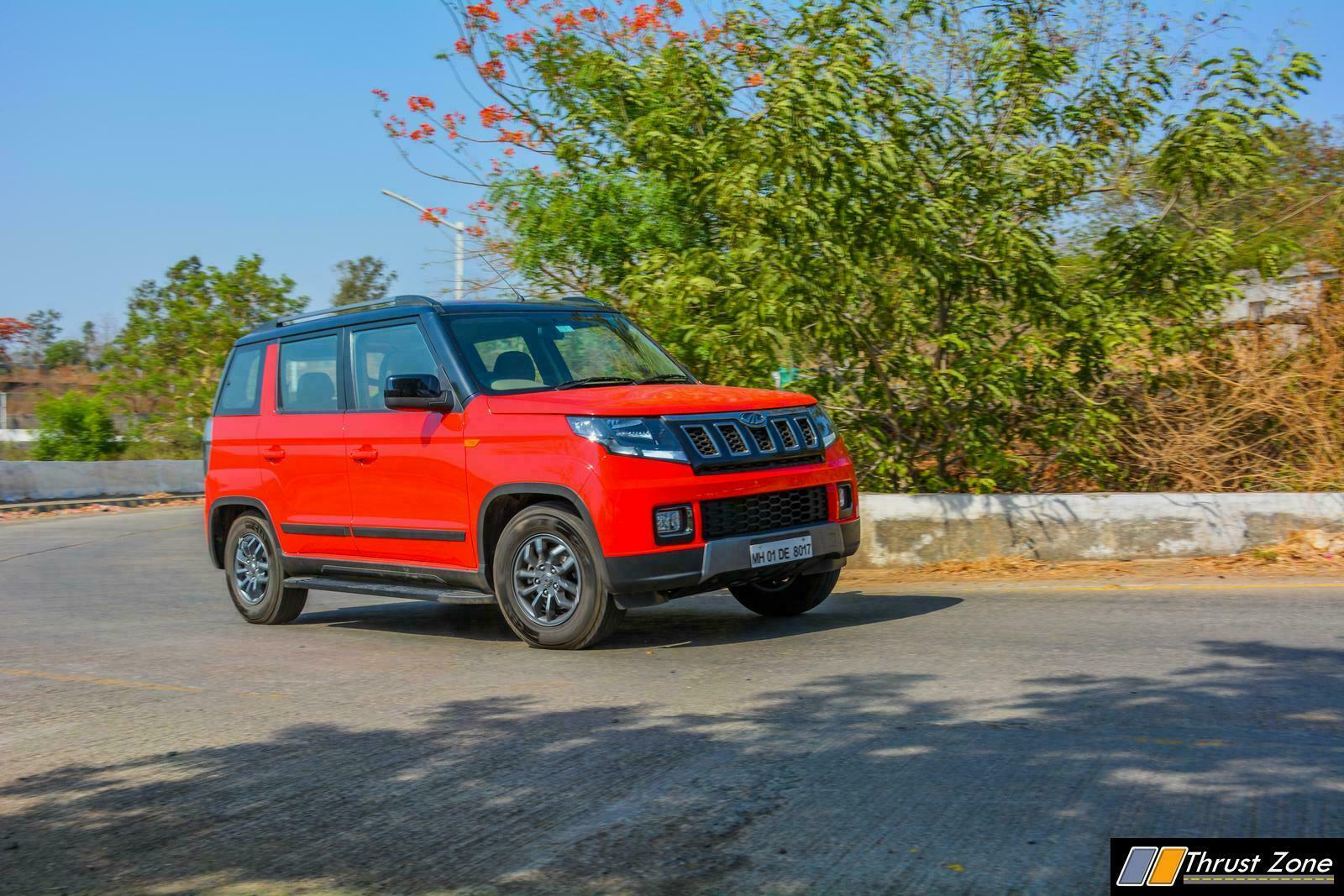 Power comes from the fantastic 1.5 litre 3-cylinder motor making 100 PS and 240 Nm of torque. Power goes through a smooth shifting 5-speed gearbox over the previous version to the rear wheels. The throw is long but the gates are defined better and the gearbox lever action is far more lighter than before. NVH levels are just about to keep the cabin fuss free and relaxing on long drives. 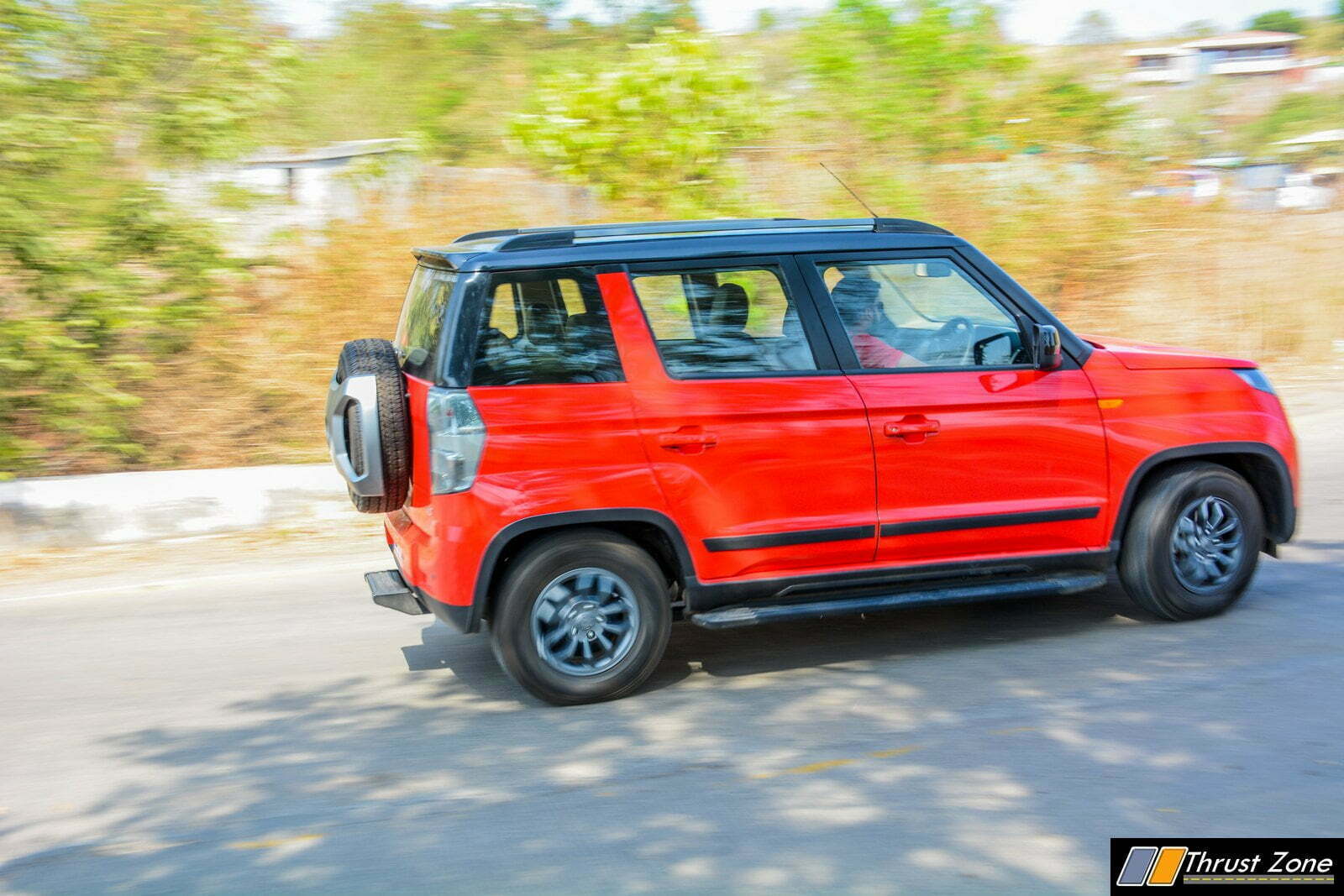 It got auto stop start and eco mode to make this more fuel economical as well. Clutch is light but not the steering, which requires effort at all speeds, which is great on the highway, but not in the city. Mahindra has again tried very hard to keep body control in check and it works. 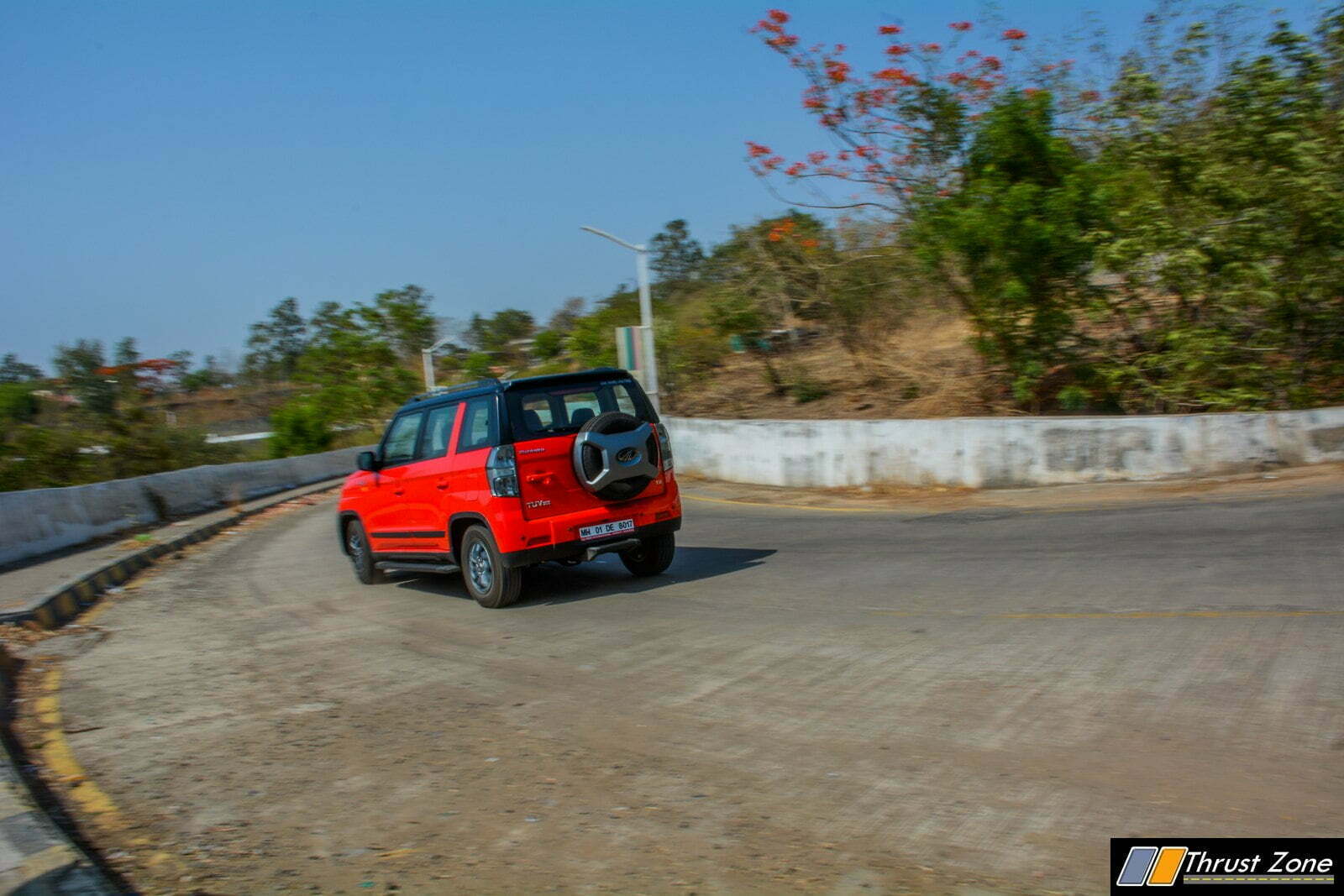 Drive it normally, not sportingly at the vehicles composure is good enough with very little vertical movements. Ride quality is good, but can be jittery at times over our ribbed concrete expressways. Brake pedal throw and bite is good improvement over previous SUV’s and stopping power comes from disc at front and drum at rear. We wish bigger tyres were here, but they would take down the good acceleration and 13 km/l fuel economy on offer. Key aspect with the TUV 300 is commuting not sporty driving. 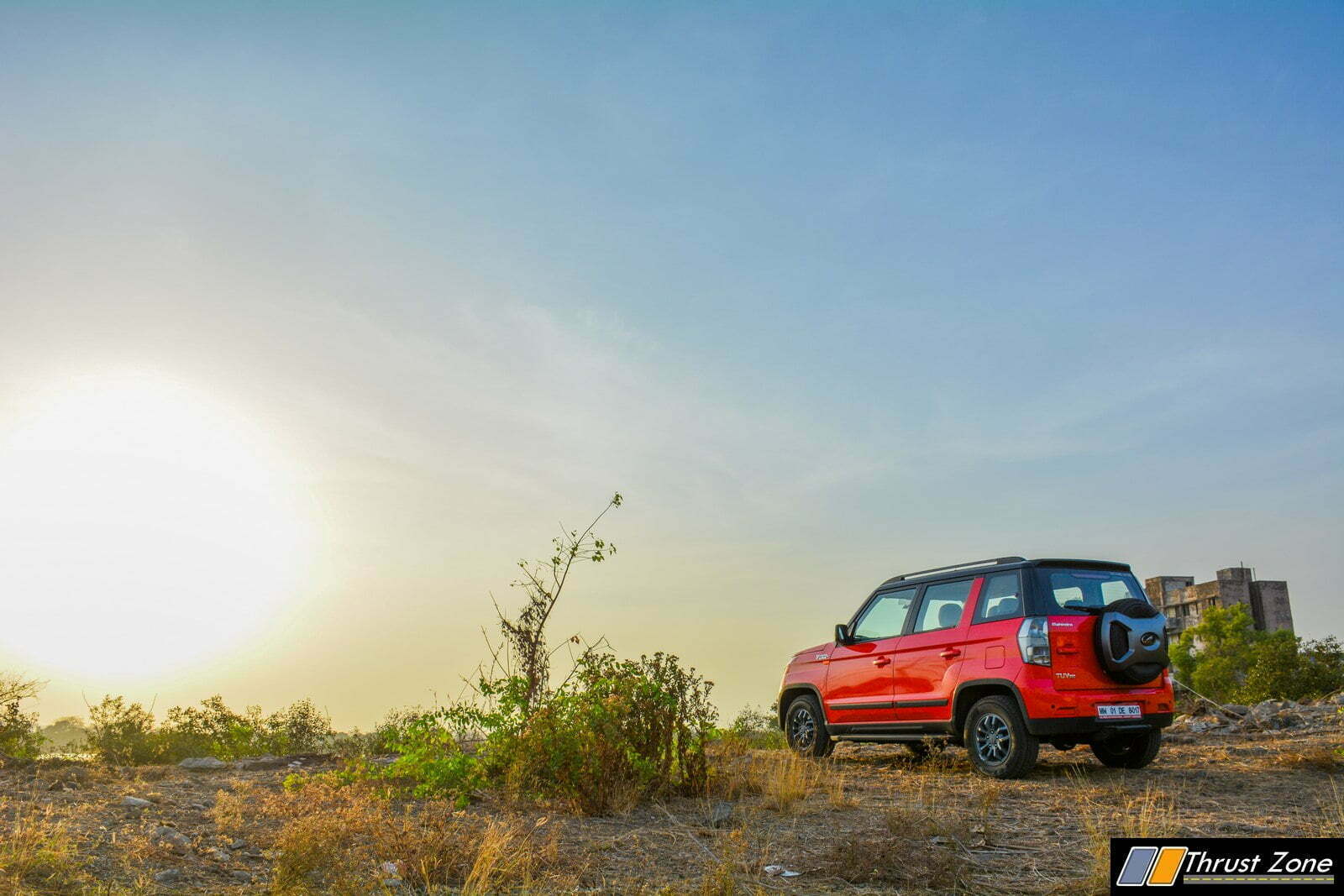 The TUV 300 is the most SUV of the lot in a segment of compact SUV’s. It gets ladder on frame solid construction which means you can do things which other SUV’s in this segment cant. However, you cannot stretch it much because it lacks four wheel drive. We think if Mahindra can add that, it can truly defy the segment and offering something like this to this class of audience would be a new and adventurist idea that could probably work. For now TUV 300 remains an SUV which has a butch stance, a commanding view and value for money price tag as well.