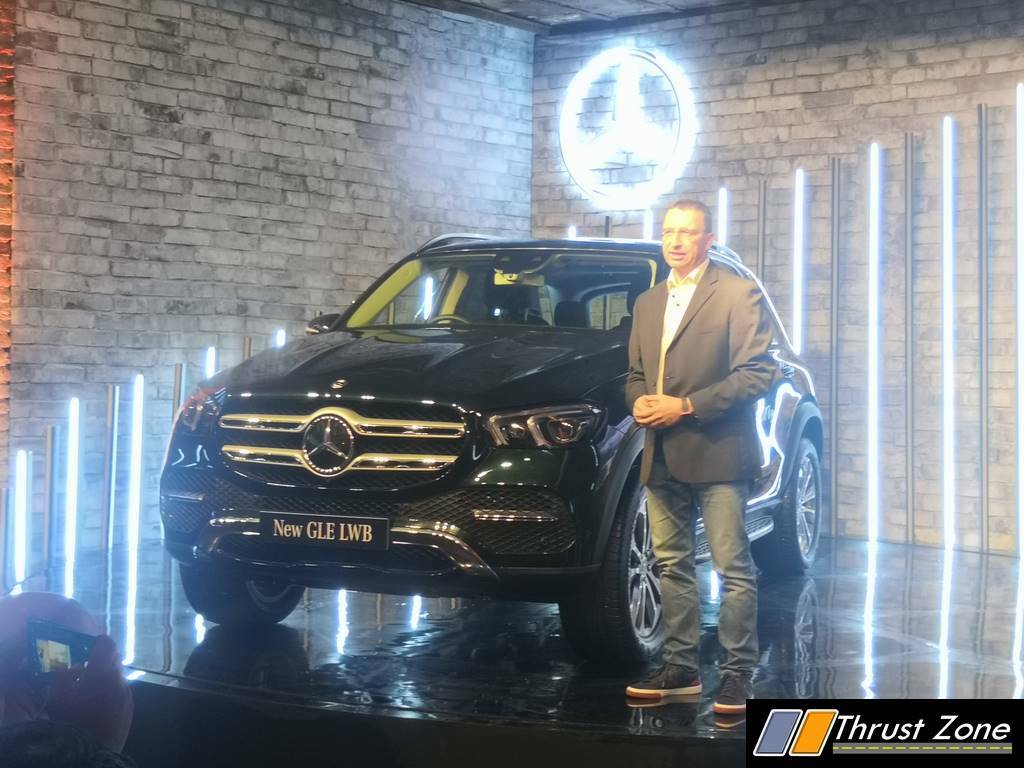 Mercedes-Benz today launched the latest generation of the GLE featuring a long wheelbase. The new LWB GLE boasts of the latest technology offered in an SUV on Indian roads and combines superlative on and off-road driving characteristics with an interior, which is luxurious and spacious than ever before, thanks to the long wheelbase. The LWB GLE displays iconic Mercedes-Benz design while remaining true to its character as an off-roader. The interior derives its fascination from the contrast between the luxurious and elegant design and the digital high-tech of our MBUX system. Martin Schwenk, Managing Director & CEO, Mercedes-Benz India and Santosh Iyer, Vice-President, Sales & Marketing, Mercedes-Benz India, launched the new GLE in New Delhi, today.

Long Wheel Base: The new LWB GLE has an 80 mm longer wheelbase than its predecessor does and it is 105 mm longer in overall length. That makes the new long wheel base GLE even more spacious and comfortable. This new LWB design of the GLE offers benefits especially to the rear seat passengers. The legroom in the second row has increased by 69 mm over the previous generation. The headroom of the new GLE at the rear has now increased by 35 millimetres as well.

The rear seat also has an inclination angle of 30 degrees along with a fore-aft movement of 100 mm., which makes the drive even more comfortable
E-ACTIVE Body Control – The 48V suspension: Even better ride comfort and agility plus completely new functions such as free-driving mode are provided by the E-ACTIVE BODY CONTROL suspension, which is now combined with the newly developed AIRMATIC air suspension. Available on the GLE 400 d, this is the only system on the market where the spring and damping forces can be individually controlled at each wheel. This means that it not only counteracts body roll, but also pitching and squat.

The focus is on the interaction with the vehicle and its functions through gestures, touch or the voice control system. This is made possible by the latest telematics generation of the Mercedes-Benz User Experience, which is characterised by intuitive logic and a wide range of operating options.There are five different possibilities to interact with the infotainment system of the GLE:
• Per Touch control on the multimedia display in the centre
• Using the Touch Control buttons on the multifunction steering wheel
• With the multifunction touchpad on the centre console
• By voice control, either with the talk button on the steering wheel or the “Hey Mercedes“ prompt

The revised voice control system makes operation even more convenient and natural. By voice command, the driver can have the system read out text messages, operate the audio systems or access vehicle functions such as the climate control system, for example. The system requires no memorised commands – the user has the freedom, for example, to phrase the desired destination address or the question about the weather report off-the-cuff. Passengers activate the voice control with the “Hey Mercedes” prompt. The talk button on the steering wheel is additionally available for this purpose.

Active Braking Assist can help you to avoid rear-end collisions and accidents with crossing pedestrians and cyclists. Besides distance and collision warning, it also provides situation-dependent brake boosting in the event that you apply the brakes with insufficient force If you do not react, it is able to initiate autonomous emergency braking. Active Braking Assist is designed to detect vehicles travelling in front and which are stationary, crossing pedestrians and cyclists in the danger zone in front of your vehicle. The functions are optimised for typical urban speeds. However, at higher speeds too the system is still always able react to slower moving vehicles. The goal is always to avoid accidents or at least to reduce their severity.

Blind Spot Assist takes a very close look for you – in particular as soon as you actuate the turn indicator. The system is thus able to give you a visual and audible warning of side collisions with other road users in the blind spot. After your trip, the system still remains alert and warns you if you open the door at the wrong time. With Blind Spot Assist you get two additional radar sensors fitted in the rear bumper. With these, the system is able to detect not only cars but also two-wheeled vehicles in the area of the blind spot. If a vehicle is detected, a red warning triangle lights up in the appropriate outside mirror. If the indicator is also activated, Blind Spot Assist gives you an audible warning of a possible collision. This warning helps you to deal safely with dangerous situations, such as lane changes, turning off and getting out in flowing parallel traffic. 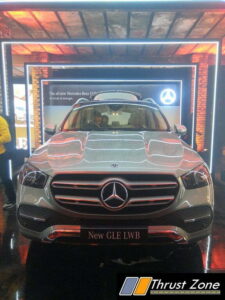 4MATIC all-wheel drive: Power is transmitted by the 9G-TRONIC automatic transmission. The broad ratio spread of gears 1 to 9 allows a clearly perceptible reduction in engine speed and is a decisive factor behind the high level of energy efficiency and ride comfort. With the 4-cylinder engines, 4MATIC all-wheel drive is realised with a transfer case which transmits the drive torque to the axles in a fixed ratio of 50:50 percent.

Interior – more space in the rear and third seat row on request: The new GLE has a considerably longer wheelbase than its predecessor (2995 mm, plus 80 mm). This creates significantly more space, especially for passengers in the rear. Legroom in the second seat row has increased by 69 mm to 1045 mm. Headroom in the rear with the standard, fixed rear seat unit and 40:20:40 split backrest has been increased by 33 mm to 1025 mm. And because the A-pillar is more upright than before, spaciousness and entry comfort in the first row has been further improved. The luggage capacity is up to 825 litres behind the rear seats and up to 2055 litres when the second seat row is folded down.

Modern luxury both on and off the road: that is the design message of the new GLE. The vehicle’s proportions with a long wheelbase, short overhangs and large, flush-fitted wheels already leave no doubt that it feels at home and cuts a good figure on any terrain. The GLE follows the design strategy of sensual purity, and dispenses with individual edges and beading in favour of generously modelled surfaces. The surfaces interact with precise graphic elements.

This striking appearance is emphasised by the distinctive headlamp design for day and night. The rear lights are also divided into two sections, which not only gives an impression of width but also creates an unmistakable night design with illuminated blocks typical of Mercedes-Benz SUVs, in this case with backlit edge lighting.