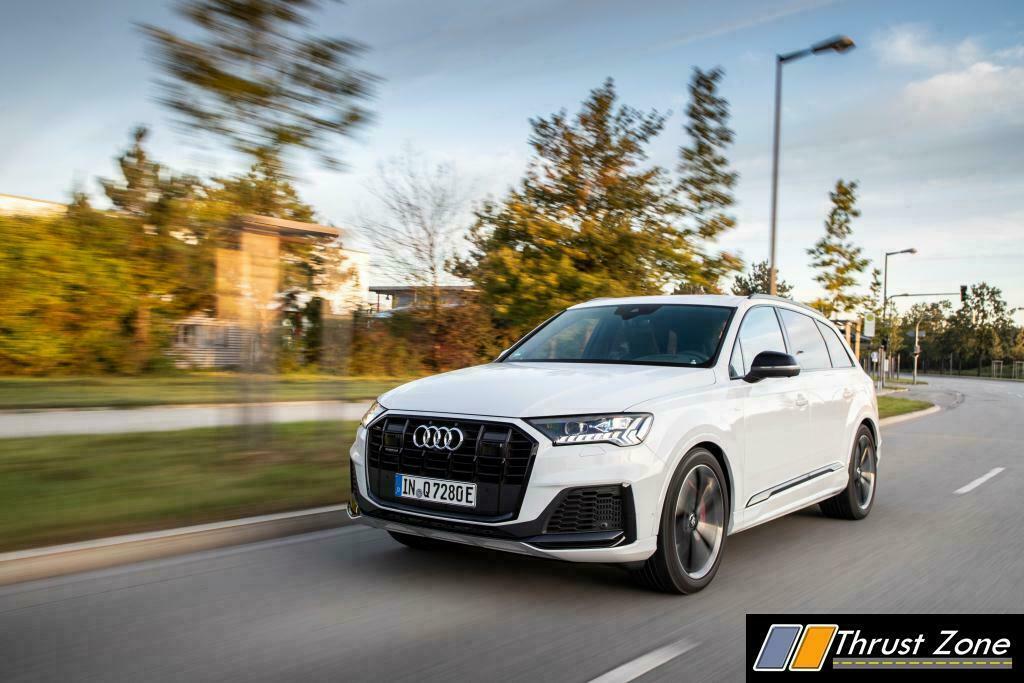 The electrification initiative at Audi is in full swing. Four new models with plug-in hybrid drive – in the Q5, A8, A6 and A7 Sportback model lines – will debut on the European market in the second half of 2019 alone. The Audi Q7 TFSI equattro continues this series. The plug-in hybrid SUV bears the “TFSI e” logo.

Like every plug-in hybrid model, the Audi Q7 TFSI e quattro** relies on the power of its two hearts. One of the brand’s most modern engines serves as the combustion engine – the 3.0 TFSI. The turbocharged, refined V6 delivers an output of 250 kW (340 PS) and 450 Nm (331.9 lb-ft) of torque. It is certified according to the Euro 6d-TEMP emission standard and is fitted with a gasoline particulate filter as standard.

A permanently excited synchronous motor (PSM), which is characterized by a high power density and compact design, serves as the electric motor. The PSM, which delivers a peak output of 94 kW and 350 Nm (258.1 lb-ft) of torque, is integrated in the housing of the eight-speed tiptronic. Together with the coupling, which connects the combustion engine to the drivetrain, it forms what is known as the hybrid module. 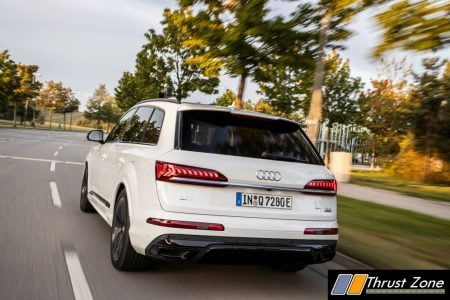 The power for the electric motor is supplied by a liquid-cooled lithium-ion battery that is positioned under the luggage compartment floor and provides an energy capacity of 17.3 kWh at a voltage of 308 volts. Its 168 prismatic cells are divided into 14 modules that lie on top of each other on two levels. The battery cooling system, which also covers the charger, forms a separate low-temperature circuit. If necessary, it can be connected to the coolant circuit for the air conditioning system or the second low-temperature circuit, which cools the electric motor and power electronics. It converts the direct current from the high-voltage battery (HV) into three-phase current to power the electric motor. During recuperation, the electric motor functions as an alternator and feeds direct current back to the lithium-ion battery.

A quick and smoothly shifting eight-speed tiptronic transfers the forces of the two motors via the quattro drivetrain to all four wheels. It is equipped with an electric oil pump that ensures lubrication in all operating states. The core of the quattro permanent all-wheel drive is a center differential with purely mechanical regulation that distributes the torque between the front and rear axles at a ratio of 40:60 in normal driving operation. When required, it transfers the majority of it to the axle with the better traction. 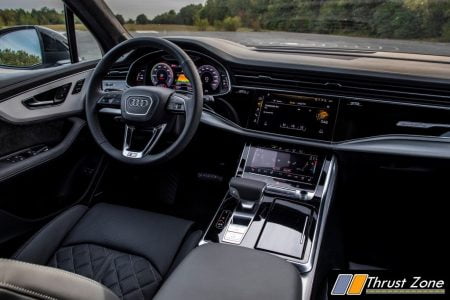 In electric operation, both Q7 variants achieve the same range of up to 43 kilometers in accordance with the WLTP procedure. In many countries and cities, their owners can benefit from tax advantages or even enjoy local traffic privileges such as free parking or driving in the bus lane. In Germany, both plug-in hybrid models benefit from the company car regulation for electric cars: The vehicle is taxed only at a flat rate of 0.5% of the gross list price.

Whether you are driving short or long distances, in the city, on country roads or the highway: The hybrid management of the Audi Q7 TFSI e quattro** choses the optimum operating strategy for each journey automatically. It is designed such that drivers can cover a large section of their daily journeys on electric power. The “EV” soft key in the lower of the two MMI displays allows them to decide whether and how they want to adjust the interaction of the two power units at any time.

The SUV starts in fully electric “EV” mode. A loudspeaker in the right wheel arch emits a synthetic e-sound to warn pedestrians and cyclists in city traffic. In accordance with the EU guidelines, this acoustic vehicle alerting system (AVAS) can be heard clearly up to 20 km/h (12.4 mph) and gradually fades out as the speed increases. The gasoline engine is activated only when the driver depresses the right-hand pedal, the “active accelerator pedal,” beyond a specific level of resistance.

“Hybrid” mode offers two operating modes: “Auto” and “Hold”. In “Auto” mode, the predictive operating strategy is activated automatically when route guidance is started in the standard MMI navigation plus. The battery charge is spread intelligently along the route, with large electric portions in the city and in stop-and-go traffic. In most cases, the TFSI engine accelerates the vehicle and the electric motor provides support as needed. When accelerating from low rotational speeds, for example, it bridges those tenths of a second that the turbocharger needs to build up pressure, ensuring that the drive has a very spontaneous response. Generally speaking, the predictive operating strategy endeavors to drive as far as possible on electric power and to use the available battery charge completely by the time the destination is reached.

A different strategy is used in “Hold” mode: In this case, the battery’s existing state of charge is kept at the current level with just minimum fluctuations. This is done by recovering brake energy, i.e. recuperation and shifting the load point – in other words, by means of targeted interventions in the management of the 3.0 TFSI. Following a long-distance journey that is driven the conventional way, for example, this allows the subsequent urban drive to be covered on purely electric power, i.e. without emissions and nearly silent. 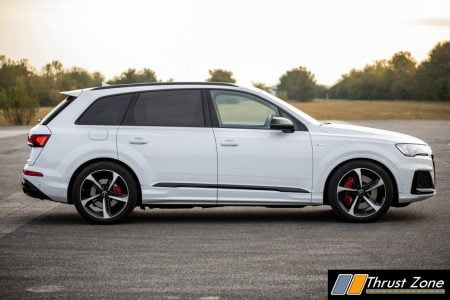 The vehicle’s operating strategy plans the management of the drives and uses a variety of data, always with the aim of optimizing ride comfort and reducing the energy consumption and CO2 emissions. When it comes to planning long-distance journeys, it takes the length and profile of the route as well as online traffic information and the driver’s driving style into account. In the short-term forecast, which runs in parallel, the standard predictive efficiency assist (PEA) system contributes information from the immediate environment taken from the navigation data, for example speed limits, types of roads and uphill and downhill gradients. The data from the camera and radar that monitor the traffic ahead is also included here.

The phases in which the driver takes their foot off the accelerator pedal are also important for the efficiency of the Q7 with plug-in hybrid drive. The PEA takes over the regulation in such situations. In addition to the navigation data, it also takes the distance to the car in front into account and then decides between freewheeling with the TFSI switched off (“gliding”) and recuperation, i.e. the recovery of kinetic energy and its conversion into electric energy. In overrun mode, the Q7 TFSI e quattro** can recover up to 25 kW of power and feed it back to the lithium-ion battery.

When operated as an alternator, the electric motor performs all light and medium brake applications up to 0.3 g, which make up more than 90% of all deceleration processes in everyday customer operation. The hydraulic wheel brakes are activated only in the case of heavier deceleration processes. Thanks to sophisticated fine tuning, the transition, also known as “blending,” between the electric and hydraulic brakes is virtually imperceptible; the brake pedal always provides good feedback and can thus be modulated precisely. During a brake application, the hybrid SUV achieves a recuperation power of up to 80 kW.

When the optional adaptive cruise assist including the radar cruise control is active, the PEA assists the driver not only with decelerating but also with fuel-efficient acceleration. If it is switched off, the driver receives prompts that indicate when it would be sensible to take their foot off the right-hand pedal. The driver feels an impulse in the active accelerator pedal and sees information displayed in the Audi virtual cockpit (standard) and on the head-up display (optional). Detailed symbols, e.g. for intersections, town signs and vehicles driving in front, explain the reason for the reduction in speed.

In the Audi virtual cockpit and on the display of the standard operating system MMI touch response, the driver can view a variety of information on electric driving: power meter, range and the current energy flows of the two drive units. As the central display element, the power meter provides information on the maximum electric performance as well as coasting or braking recuperation, for example. 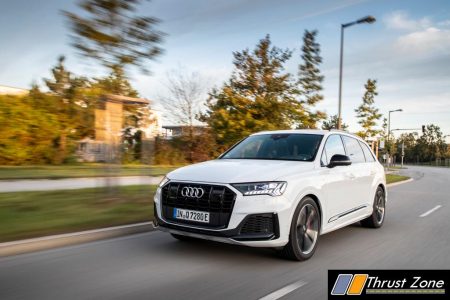 In addition to the “EV” soft key, the driver of the Audi Q7 TFSI e quattro** can influence the ride character at a second level: the Audi drive select system. The driver can use the ride profiles “comfort,” “efficiency,” “auto,” “dynamic,” “individual,” “allroad” (with the optional adaptive air suspension) and “offroad” to influence the setup of the drive, air spring suspension and steering.

Depending on the settings, the way in which the drives work together changes when the driver depresses the accelerator pedal. In the “dynamic” profile of Audi drive select and in transmission mode “S,” the electric motor supports the 3.0 TFSI with a pronounced boost function for high levels of dynamism and agility. When the foot is taken off the accelerator pedal, freewheeling is blocked in this setting; the electric motor thus recuperates whenever the foot is taken off the right-hand pedal.

Audi Q7 TFSI equattro delivers a system output of 335 kW (456 PS) and 700 Nm (516.3 lb-ft) of system torque. Its sporty appeal is reinforced by the standard S line exterior with a full paint finish in the body color and striking design details at the front and rear ends. The look is completed by the black styling package and the Matrix LED headlights. Red brake calipers are installed behind the 20-inch wheels and the adaptive air suspension provides a great range from taut handling to comfortable rolling.

The interior of the Q7 60 TFSI e quattro** features the interior S line/S line sport package. This includes sport seats with S line embossing, black headlining and aluminum inlays. When the doors are opened, LED lights in the door sills project the four rings onto the ground. Most equipment features are also available for the Audi Q7 55 TFSI e quattro** upon request.

The charging socket of the new plug-in hybrids is located in the rear section of the left sidewall, opposite the tank filler neck. The Audi Q7 TFSI e quattro** can be charged conveniently at public charging terminals while on the road, using the standard mode 3 cable with a type 2 connector. Upon request, Audi’s own charging service, the e-tron Charging Service, provides access to more than 110,000 charging points in Europe. Customers can use a single card to charge at terminals from numerous different providers.

The myAudi app allows customers to use the services from the Audi connect portfolio on their smartphones. They can also check the battery and range status, start charging processes, program the charge timer and view the charge and consumption statistics. The charging stations are listed in both the app and the vehicle’s navigation system.

Another function of the myAudi app is the pre-entry climate control even before setting off. For this function, the compressor of the air conditioning system and the standard thermoelectric heater booster in the vehicle use power from the high-voltage battery or the socket. Customers can determine how the interior should be heated or cooled while the SUV is parked or the battery is being charged. Depending on the equipment, they can also activate the steering wheel and seat heating as well as the seat ventilation using the pre-entry climate control system, either via the myAudi app or via the timer in the vehicle.