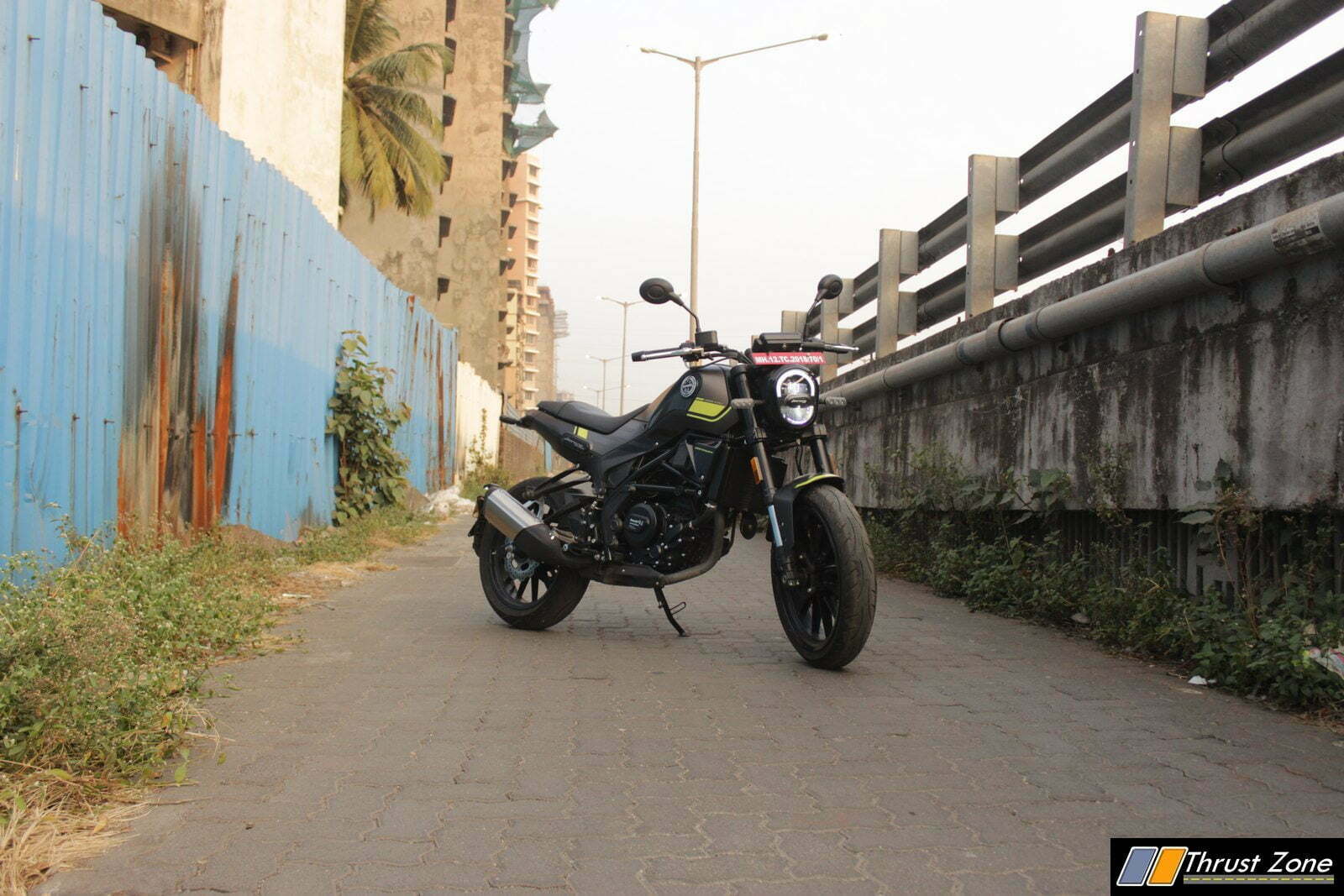 Though looks are subjective, the Benelli Leoncino 250 is a very handsome looking motorcycle. The retro-styling mixed with the scrambler profile gives the Leoncino 250 a distinctive look. Road presence is in abundance and the bike surely turns a lot of heads. It’s zero shaped all-LED headlight flanked by LED turn signals not only serves the purpose of illumination but contributes majorly to the front fascia of the bike. Apart from that, the single-piece seat and the low-set license plate holder at the rear gives the bike a rugged look. 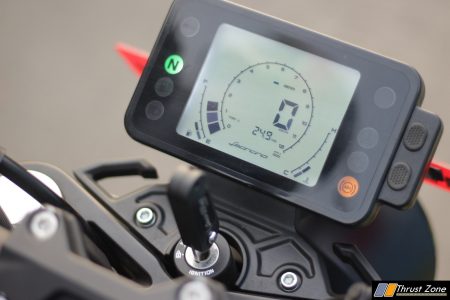 The build quality has been up to the mark for the most part. The switchgear quality, the buttons and everything else feel sturdy, not entirely premium. The paint quality and overall finish reflected the same. The bike feels solid minus the panel gap inconsistency. As mentioned earlier, the seat cushioning and material comes off as premium too.

The test bike wore a matte finished brown paint with lime green accents running on the front fender, the lower portion of the fuel tank and other body panels. Oh, how could we possibly miss out on the Lion at the front? Sans the shortcomings, one would consider the bike just for the looks of it.

Moving from the appearance to the performance, there’s quite a lot to talk about. The Leoncino 250 sports a 249cc, single-cylinder, liquid-cooled motor that’s mated to a 6-speed gearbox and churns out 25.1 bhp and 21Nm of max torque. Aforementioned are just claimed figures but what about the real-world feedback from the motor? Its peppy, playful and surely has a character. The power delivery is consistent from the mid-range to the top end, but the engine feels a bit clunky at low revs. Ramping up the struggle is the heavy clutch feel. In stop and go traffic, consistent use of the clutch left me with a sore hand.

At speeds upwards 50 kmph, the bike feels lively and shows no sign of discomfort while cruising at triple-digit speeds either. That being said, the Leoncino 250 has its sweet-spot from 4000rpm up to 6500rpm. Don’t get it twisted, even at higher rev range the engine doesn’t juice out and you will probably enjoy gunning for the top-speed. However, the vibrations do creep in from the handlebar and the fuel tank area towards the seat. Lane changes and overtakes are no big deal for the Leoncino 250, courtesy the instant power on offer. 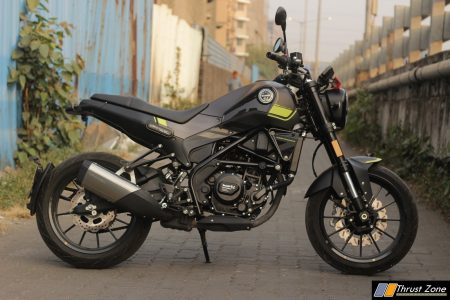 The bike tips the weigh scale at 162 kg and you feel that while pushing it around the parking lot and at times while filtering through bumper to bumper traffic. The 1380mm long wheelbase of the Leoncino 250 is longer than the arch-rivals. It’s not just on paper but felt in person as well. Zipping around town you may find the seat to be well cushioned but the pillion might reconsider while hoping back on the bike. It is not just the small pillion seat that’s uncomfortable, but the absence of a grab-rail does the same. The rider and pillion footrest could’ve used a bit more space to avoid awkward touching of the feet between the two. 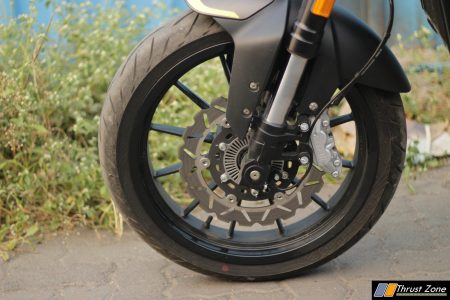 The handlebar is wide and underpins the overall comfort for the rider. The bike stays planted at high-speed runs and is nothing but confidence-inspiring. However, the same cannot be said about cornering capability. Benelli has offered Metzeler’s H-spec M5 tyres with the Leoncino 250. So, the grip isn’t of concern but it’s something about the heavy front end that just doesn’t let you dive into the corner as you would like to.

Suspension duties are carried by 41mm USD forks up front and preload-adjustable mono-shock at the rear. The said setup is decent for city runs including jumping over small bumps and potholes. However, the rider triangle isn’t very ‘scrambler friendly’. To be precise, riding the bike over the trail with your buttocks off the seat isn’t very comfortable if you have to do so. What’s good is the ground clearance of the Leoncino 250. Not once did the bottom of the bike scrape or left us worried about it. That brings us to the next point, seat height. The Leoncino has a seat height of 810mm and I could easily flat-foot on the ground being 5’9. An average-sized Indian won’t have a hard time moving the bike around while on the seat. 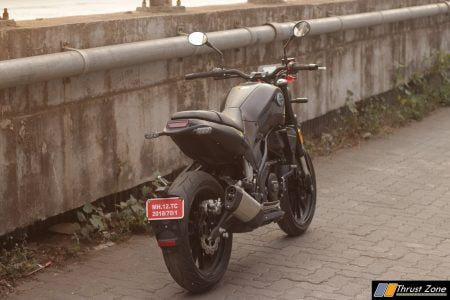 Let’s talk about one of the most important aspects of a motorcycle, braking. The ABS is connected to the ECU of the vehicle and is calibrated in a way to push the braking lever back during panic/sudden braking. Now, the calibration varies for each manufacturer. The case with Benelli’s Leoncino 250 is a bit disappointing one. The ABS is overly intrusive and kicks in at any time of the braking. Even the most minute undulation on the road and applying the brakes will trigger the ABS.

Overall the Leoncino has a decent package on offer but could be a lot better if the braking was looked after. The rider triangle seems to be dangling around being Scrambler friendly and commuter oriented as well. With an average fuel economy of 35kmpl combined with the fuel tank capacity of 12.5 litres, munching miles will not be a problem. But there’s quite a bit that needs to be completely revamped and looked after thoroughly to make the bike feel like a well-finished product. For now, it seems like the right product for someone entrying into the motorcycle world and truly wants something bespoke.