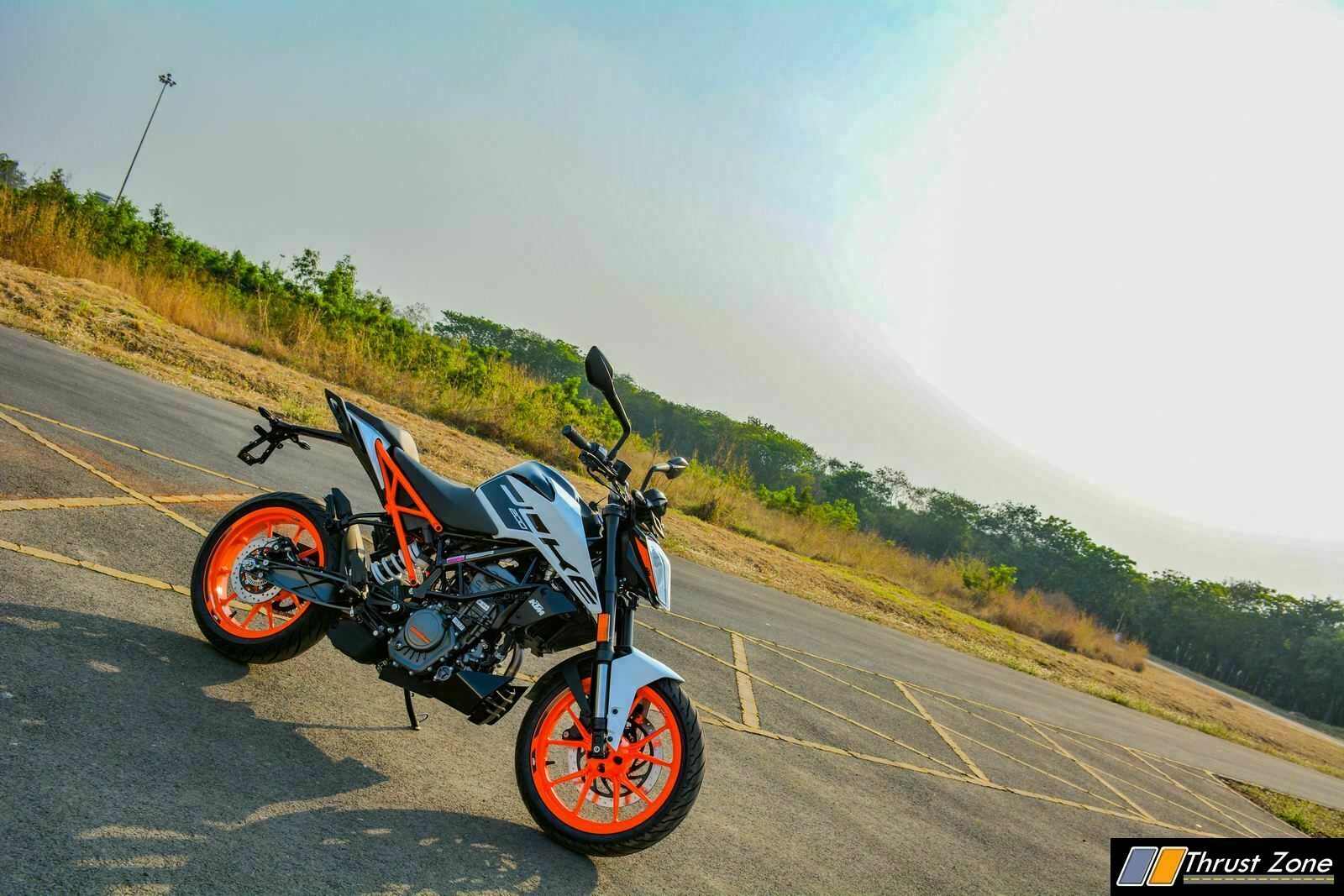 If this is were till a year ago and were out testing the Duke 200, it would been over rather quickly. Why? The Duke 200 has been the same since day one of its launch till last year. The shape introduced in January 2012 carried over till January 2020 was the same. Graphics changes and BS4 upgrade in 2017 made it noticeably different but still similar in many ways. However, finally the new one is here and the old generation design is now reserved only for the KTM Duke 125. The KTM Duke 200 is all new and yet, similar in many ways. 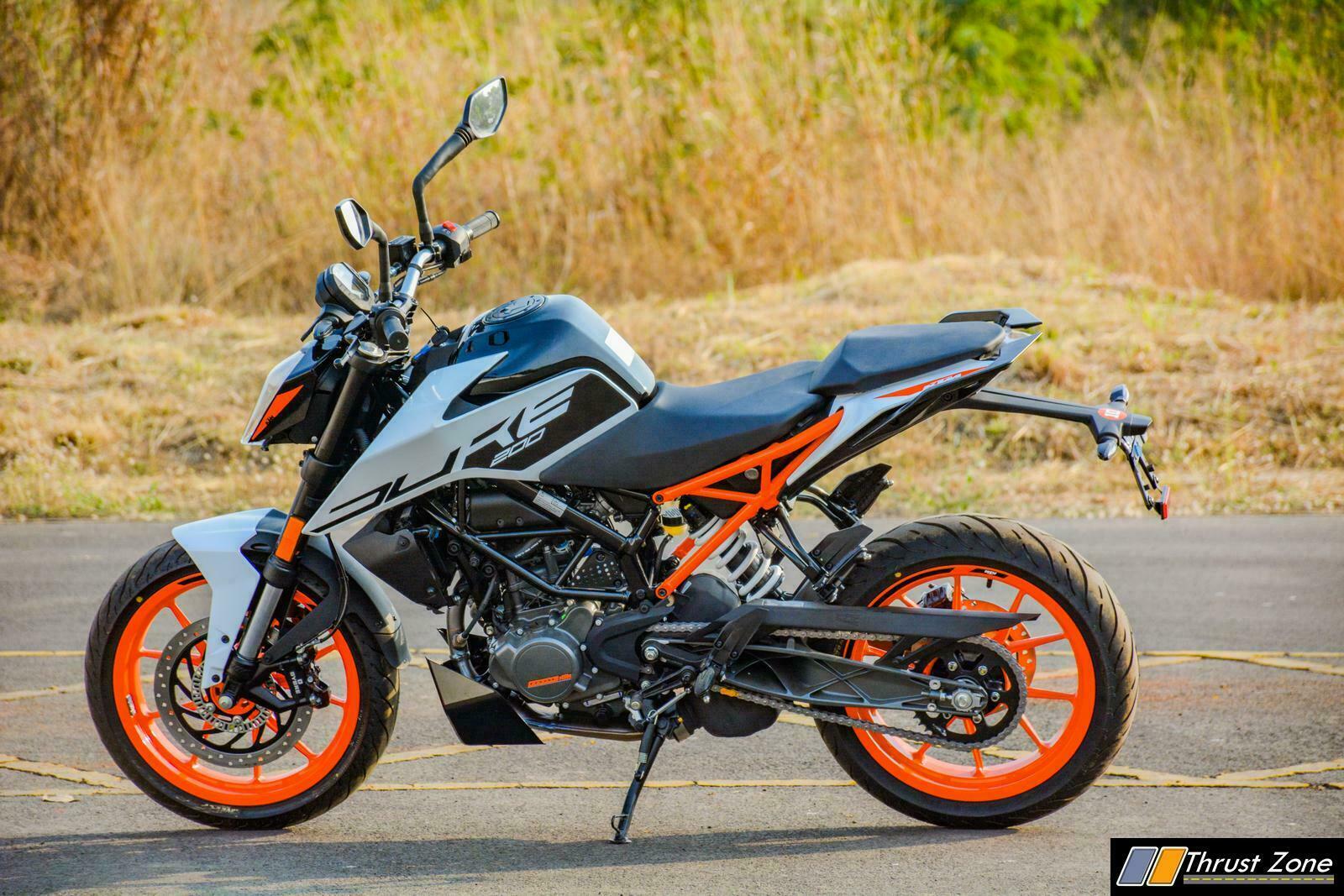 How is it like? Our first impressions from the track are here and again, there is little to discuss as it is based on the Duke 250 and 390 that we have been witnessing since 2017. The tank extensions are sharp, the headlight has an LED DRL and halogen layout as the design as the same as its elder siblings now. The exhaust is the same as before and doesn’t get the side slung unit like its elder siblings. The orange and black color concentration is higher here. Orange wheels, fuel tank and subframe along with black forks and chassis make the bike look brand new and fresh despite the three year old design. Two new color options Electronic Orange & Ceramic White are now on offer. 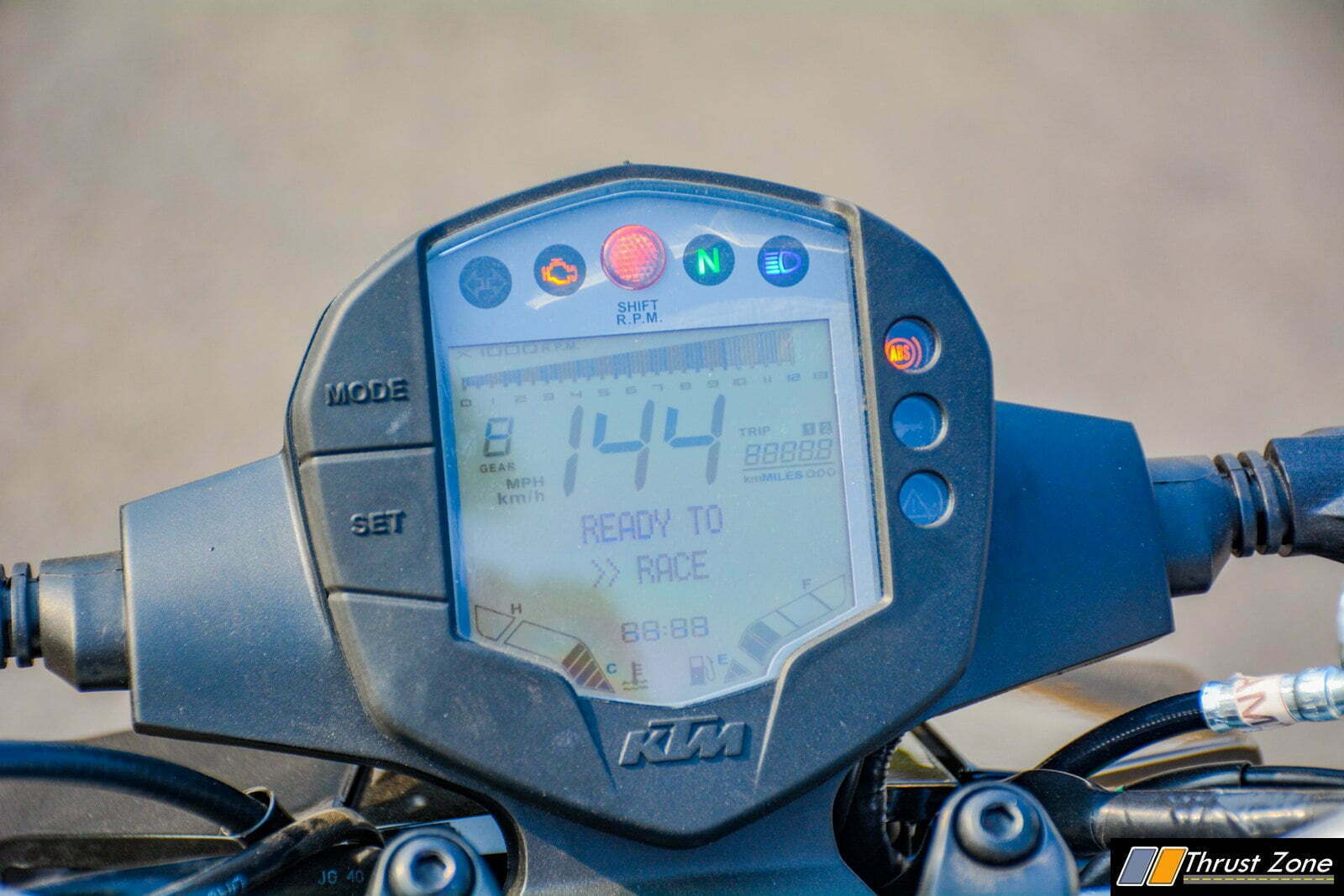 Instrumentation remains the same and shows you everything you would ever need. All fuel economy parameters, clock, service, ABS mode and trip meters along with more features. Switches remain the same with the inclusion of AHO as before and engine kill switch and usual buttons for horns and lights on the left. Quality and finish is excellent in all areas of the cockpit and fuel tank.

Ergonomics have changed dramatically. What we saw three years ago in the D250 and D390 can now be seen in the Duke 200 transition. The seat is far more accommodating, easier and slightly less stiff over the previous version. Grab rails are easier to access and the pillion seat is better as well. You sit a bit higher but the handlebars are set a bit low. Mirrors stalks are now bigger to give a better view too. 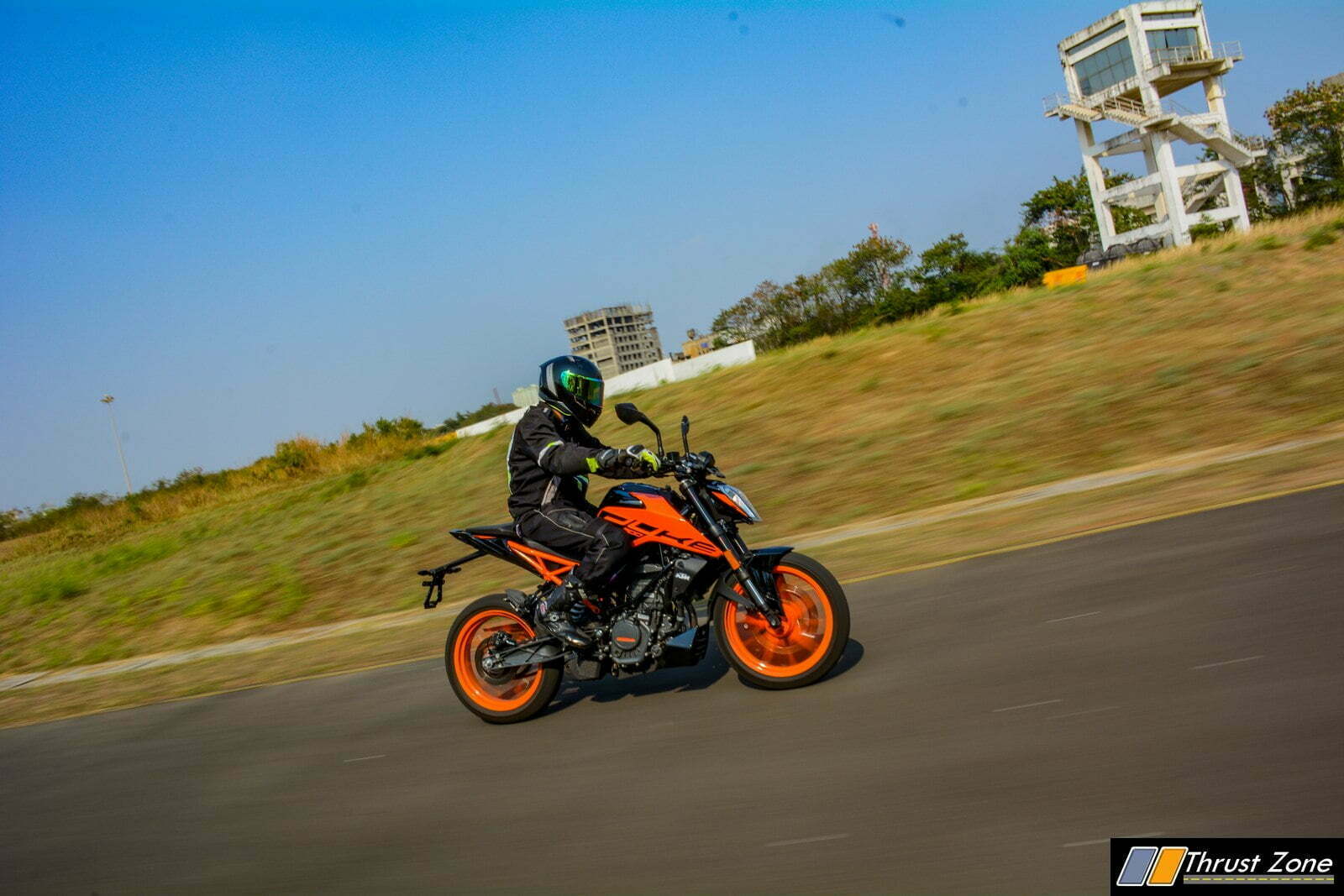 Riding the BS6 Duke 200 is no big change over the BS4 version. The engine is now smoother thanks to revised fuelling, power delivery is linear and throttle response feels more crispier. The short gearing remains but not too much of a bother as the frantic fuelling doesn’t distract you from the job at hand. Engine is much more calmer and docile than before making it easier to live with on a daily basis. Power is 25 BHP as before but torque has gone up from 18 NM to 19 Nm which makes things more punchier without losing to the BS6 transition in terms of character. That’s the biggest highlight, the feel hasn’t gone much over the BS4 version, but the BS3 to BS4 transition was already huge. So what we miss is the BS3 version, even today! What the KTM Duke 200 continues to be a fun, quick and fast enough motorcycle to keep you entertained on highway and city duties. 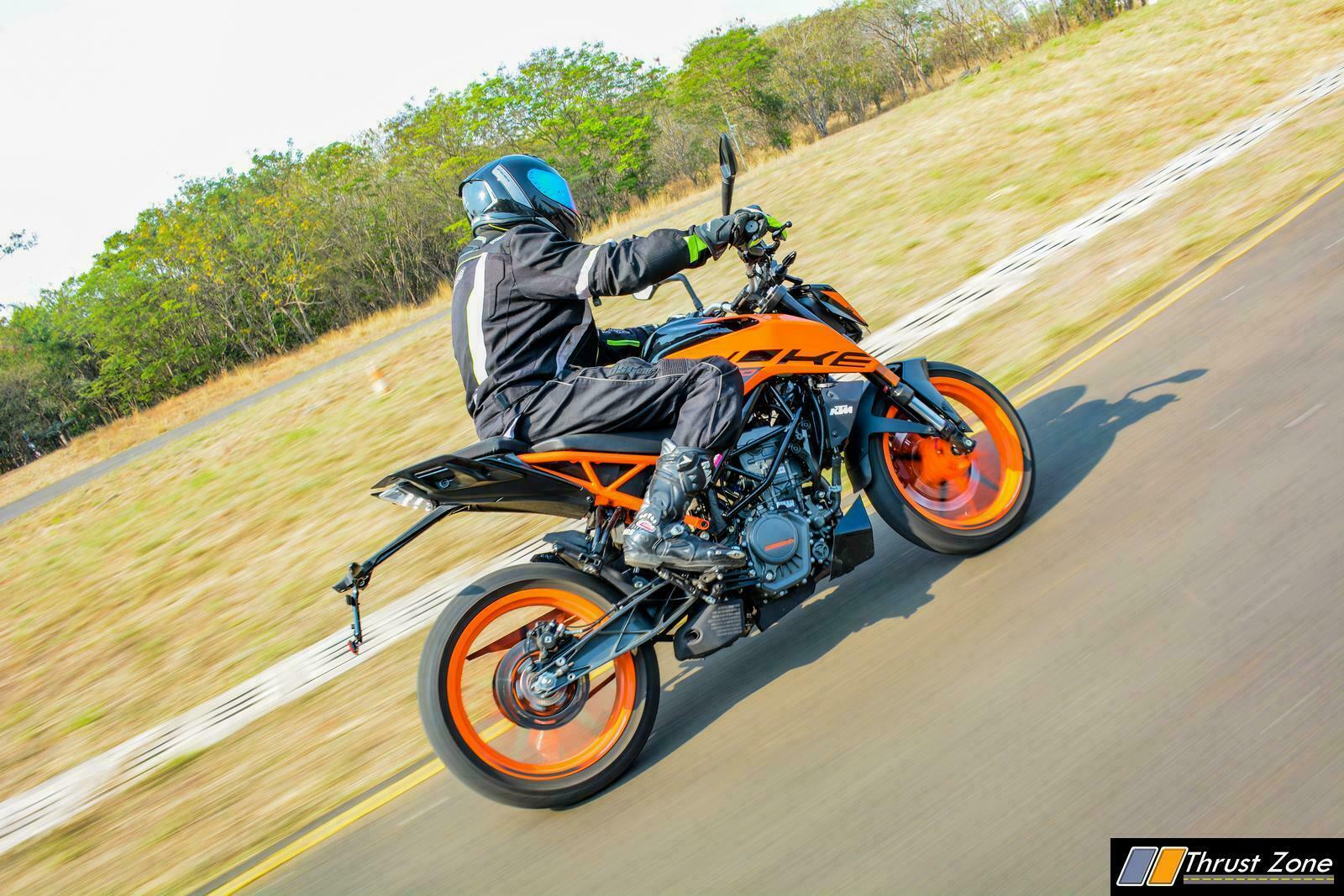 Dynamically, the KTM Duke 200 gets same confidence inspiring chassis as before. You get more feedback from the front as the handlebars are mounted lower than the previous version. The motorcycle does feel more sportier to ride but the extra center of gravity has gone which the higher mounted handlebar provided. However, the suspension travel has increased by 2 mm to keep that in check, but the overall feel is still different than before, in a good way ofcourse. 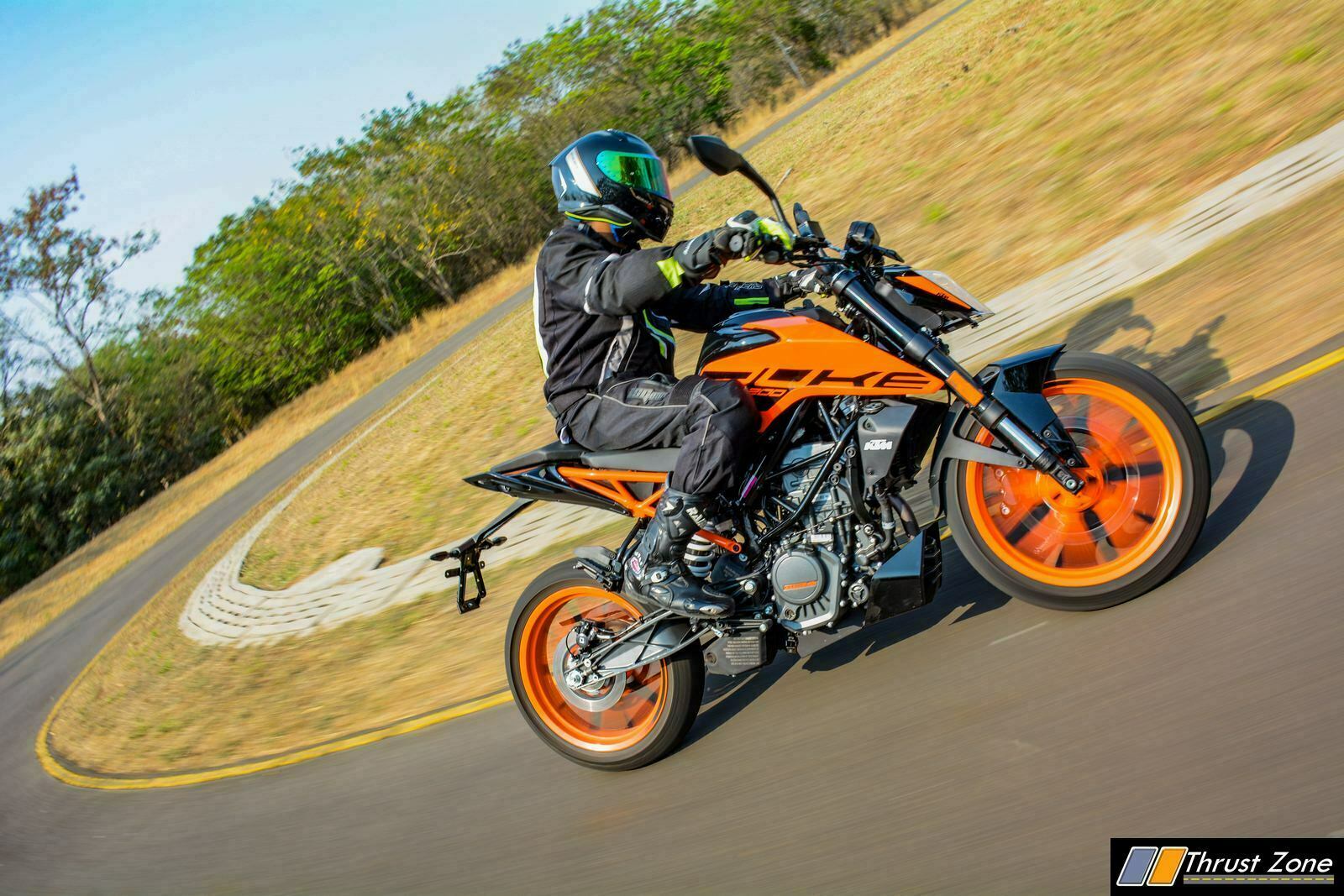 MRF Tyres are grippy enough and introduction of dual channel is a welcome move. Brakes are good in terms of power but lack that extra bite the Duke 200 deserves. The weight increase of 9 kgs hasn’t affected the handling as the suspension has been reworked to meet the previous benchmark. Overall, the Duke 200 continues to be agile, nimble, stable and quick to turn-in making it the most fun to ride bike in its class. 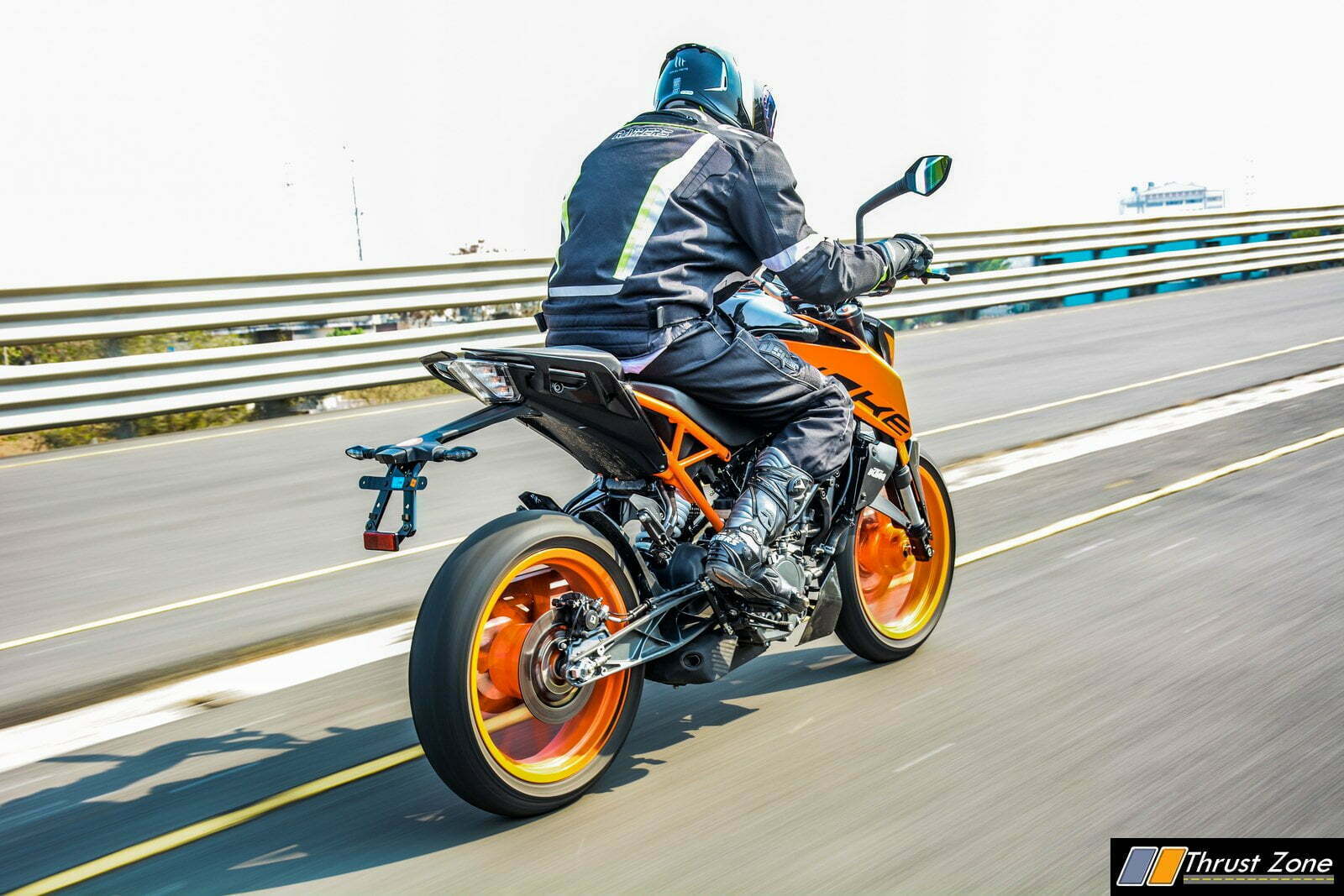 On paper, the new Duke 200 does everything, good and bad. Weight increase, BS6 compliant (robs away fun on paper) and price increase. However, the good parts over shadow the negative points. So when someone tells you the fun is gone from the Duke 200, you shouldn’t believe them. The Duke 200 has become more mature but still fun and immediate in nature to ride hence providing some serious fun. KTM’s hard work means none of the character is gone. The new design, ergonomics and added value make the Duke 200 come back into the Indian market after the Duke 125 stole some of its thunder. We will see over the three months what the sales report says, but we think the king is dead, long live the (new) king.