The new-generation Land Rover Defender was launched in India last year and is off to an excellent start in the country. However, the model sold was only the petrol version with the diesel yet to be introduced. Nevertheless, the new Defender Diesel has been listed on the company’s website and deliveries for the model have commenced as well. The 2021 Land Rover Defender Diesel is priced from Rs. 94.36 lakh, going up to Rs. 1.08 crore (ex-showroom India) for the Defender 90 diesel. Whereas, the Defender 110 diesel is priced between Rs. 97.03 lakh and Rs. 1.08 crore (ex-showroom, India). The 2021 model year version has also brought two new engine options – a 3.0-litre six-cylinder turbo petrol and diesel respectively.

The Land Rover Defender is being offered in the 90 (three-door) and 110 (five-door) versions. The automaker recently confirmed that a longer 130 (seven-seater) is also in the works and will arrive globally towards the end of 2022. At present, the Defender Diesel is offered in four variants – SE, HSE, X-Dynamic HSE and X. In terms of power, the 3.0-litre diesel packs 300PS and 650Nm of peak torque. That’s a substantial power upgrade over the introductory 2.0-litren turbo petrol from the Ingenium family. The new 3.0-litre six-cylinder turbo petrol, meanwhile, develops 400PS and 550Nm. Both engines are paired with an 8-speed automatic transmission. The SUV also gets four-wheel drive as standard with two transfer box. The existing 2.0-litre petrol still stays on sale with 300PS on offer. 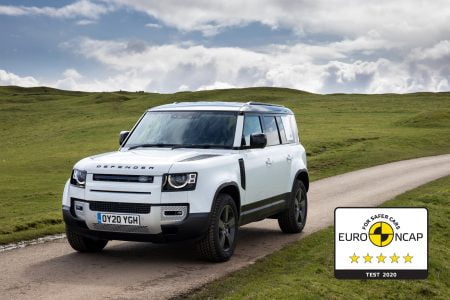 Retaining its heritage from the original version, the new Defender packs a host of advanced equipment right from the 10-inch touchscreen infotainment system with Pivi-Pro, Meridian audio system, electrically adjustable seats, wireless charging, 360-degree camera with squatter views, air suspension, and more. The model comes with all-terrain tyres as standard with alloy wheels, while customers have the option to opt for steel wheels too. 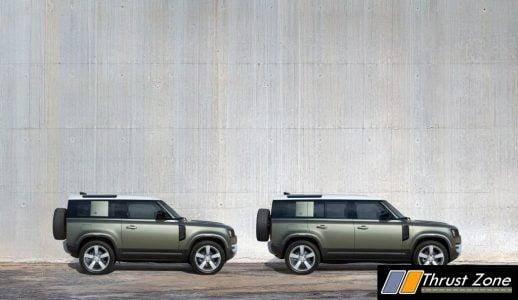 Land Rover India will also bring the plug-in hybrid version of the Defender this year in the P400e guise. The variant is slated to arrive later in the year. At the moment, JLR India is gearing up to introduce its first all-electric offering in the country, which is the Jaguar I-Pace and is scheduled to arrive on 23rd March, 2021.