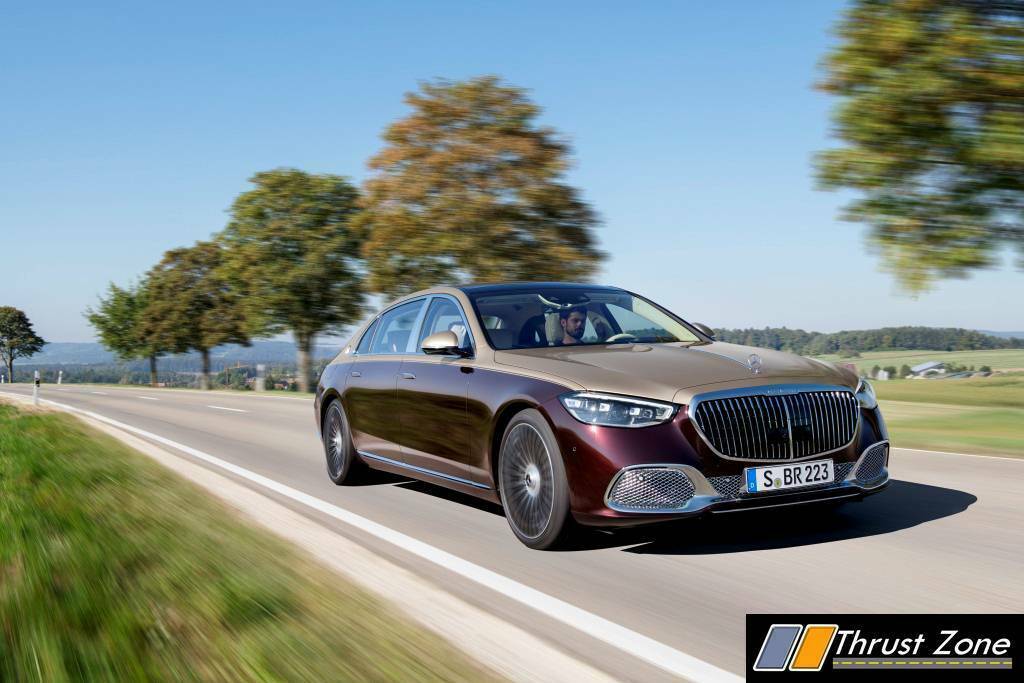 The 2021 Mercedes-Maybach S-Class is particularly suitable for chauffeured driving. The 18 cm longer wheelbase compared to the long variant of the Mercedes-Benz S-Class entirely benefits the rear. The focus on the rear area. This is underlined by even more refined appointments. The massage function of the calfrests on the Executive seats is a new feature. The First-Class Rear has been extensively upgraded. The neck/shoulder heating in the rear is another comfort feature.

On request, the exclusive appearance of the 2021 Mercedes-Maybach S-Class can be enhanced by a two-tone paint finish with dividing line. This is applied by hand according to the highest quality criteria. Distinguishing features at the front include the distinctive bonnet with a chromed fin and the Mercedes-Maybach radiator grille with fine, vertical chrome pinstripes. The Mercedes-Maybach S-Class also differs from its brother models when viewed from the side: the rear doors are wider, and the C-pillars feature a fixed quarterlight. A Maybach brand logo on the C-pillar underlines the exclusivity.

On request, the 2021 Mercedes-Maybach S-Class can be equipped with electrically operated comfort rear doors. With this feature, the wide rear doors can be conveniently opened and closed with little force even on a gradient. Integration into the infotainment and control system MBUX and Blind Spot Assist ensures a high level of operating convenience and additional safety. The rear doors can also be operated from the driver’s seat – an important function when chauffeur-driven.

DIGITAL LIGHT technology celebrated its world debut in small-series production of the preceding model, but is now in full series production with the new S-Class generation. This revolutionary headlamp technology (optional equipment) allows completely new functions, e.g. the projection of marking aids or warning symbols onto the road ahead. In each headlamp, DIGITAL LIGHT has a light module with three extremely powerful LEDs with light that is refracted and directed by 1.3 million micro-mirrors. The resolution is therefore more than 2.6 million pixels per vehicle.

The interior of the 2021 Mercedes-Maybach S-Class is based on the completely new interior design of the new Mercedes‑Benz S-Class. The large areas of trim on the front seats are a new feature in the Mercedes-Maybach. High‑quality wood surrounds encase the rear of the front seat backrests, giving the impression of generous lounge seats. If the First-Class Rear is specified, a similarly striking area of trim is positioned between the two rear passengers. 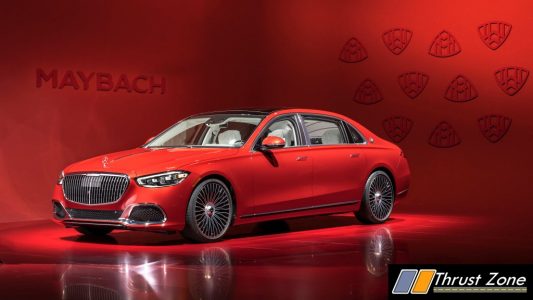 Coupé and Cabriolet customers of Mercedes-Benz have long come to appreciate the automatic seat belt extender. Rear passengers in the Mercedes-Maybach S-Class are now the first to benefit from this convenience in the rear of a saloon. The belt extender is an indirect invitation to fasten the belt, and also makes the process more convenient. It is no longer necessary to move from an adopted, comfortable seating position to fasten the belt. The belt extender is integrated into the adjustable backrest of the Executive seat, and therefore always in the right position for the passenger.

Adaptive rear lighting is celebrating its premiere in the Mercedes-Maybach. This follows the wishes of the occupants in several respects: as well as the brightness, the size and position of the light spot can be adjusted. There is also a wide adjustment range between precise working light and relaxing lounge light.

The second generation of learn-capable MBUX (Mercedes-Benz User Experience) introduced in 2018 has its debut in the new S-Class. The unique feature of MBUX is its networking with a wide range of vehicle systems and sensor data. Brilliant displays on up to five large screens, in part with OLED technology, make the control of vehicle and comfort functions even easier. On request, the Mercedes-Maybach S-Class can also be equipped with MBUX Interior Assist in the rear. 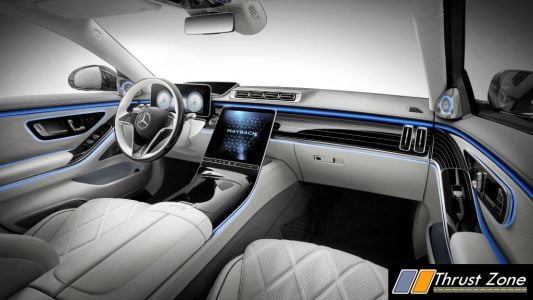 During severe frontal collisions, the rear airbag included as standard can considerably reduce the loads acting on the heads and necks of seat belt wearing occupants on the outer rear seats. The frontal airbag for the rear seat deploys particularly gently thanks to its innovative construction using a tubular structure.

Thanks to rear-axle steering (optional equipment), the Mercedes-Maybach S-Class is easy to manoeuvre even in dense city traffic. The steering angle at the rear axle is up to ten degrees. It reduces the turning circle of the S-Class by up to two metres.

Even better ride comfort and agility, as well as innovative functions such as raising the vehicle body in a lateral crash, are provided by the E-ACTIVE BODY CONTROL active suspension, which is combined with the standard AIRMATIC air suspension. It is able to control the spring and damper forces at each wheel individually. Together with ROAD SURFACE SCAN and the curve inclination function CURVE, E-ACTIVE BODY CONTROL makes an extraordinary level of comfort possible.

It is expected that initially in Germany and from the second half of 2021, the Mercedes-Maybach will be able to drive in conditionally automated mode with the new DRIVE PILOT (optional equipment) in situations where traffic density is high or in tailbacks on suitable motorway sections. By taking pressure off the driver, this allows him/her to undertake secondary activities such as surfing the web or attending to emails in the In-Car Office. This allows a more effective use of time. 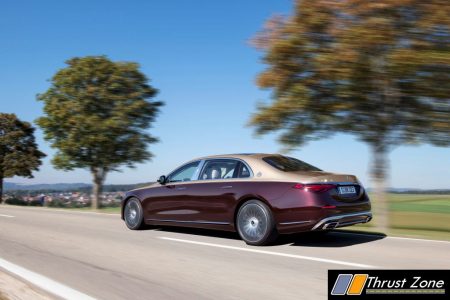 Thanks to an integrated second-generation starter-alternator (ISG), the V8 engine has a 48V system. This makes an electric boost of 15 kW/20 hp and an additional torque of 200 Nm available in the S 580 4MATIC. The rated output of the combustion engine is 370 kW (503 hp), while 700 Nm of torque over a wide engine speed range from 2000 to 4500 rpm ensure superior power delivery. Other highlights of the engine include cylinder shutoff by CAMTRONIC, the hot inner-V with perfect response of the two turbochargers, and close-coupled catalytic converters.

The cylinder shutoff system operates in the partial load range. The variable valve control system CAMTRONIC shuts off four cylinders at once. This reduces the gas exchange losses while improving the overall efficiency of the remaining four cylinders in combustion mode by shifting the operating point towards higher loads.

To reduce engine noises in the interior, the S 580 4MATIC features engine order cancellation (EOC). This means that the rpm of the engine is used as an input variable to generate counterwaves in the partial load range. These have the opposite phase to the sound waves generated by engine vibrations. The sound is emitted via the bass speakers of the Burmester® high-end 4D surround sound system.

A coated second-generation petrol particulate filter is used to clean the exhaust gases. As well as efficiently filtering out particulates, this filter has a catalytic function. Other pressure and temperature sensors, as well as the latest oxygen sensors, ensure efficient exhaust treatment throughout the characteristic map.

The V12 biturbo unit was comprehensively modified for use in the S 680 4MATIC. The exhaust gas turbochargers, exhaust manifold and air ducting were all adapted. Also new is a closed-loop petrol-engine particulate filter. The V12 has an output of 450 kW/612 hp and a displacement of 5980 cc. The maximum torque is 900 Nm from 2000 rpm. The most important features of the engine include an all-aluminium crankcase, a one-piece chain drive, a forged crankshaft made of high-quality quenched and tempered steel, forged pistons and a multi-spark ignition system with twelve double ignition coils. 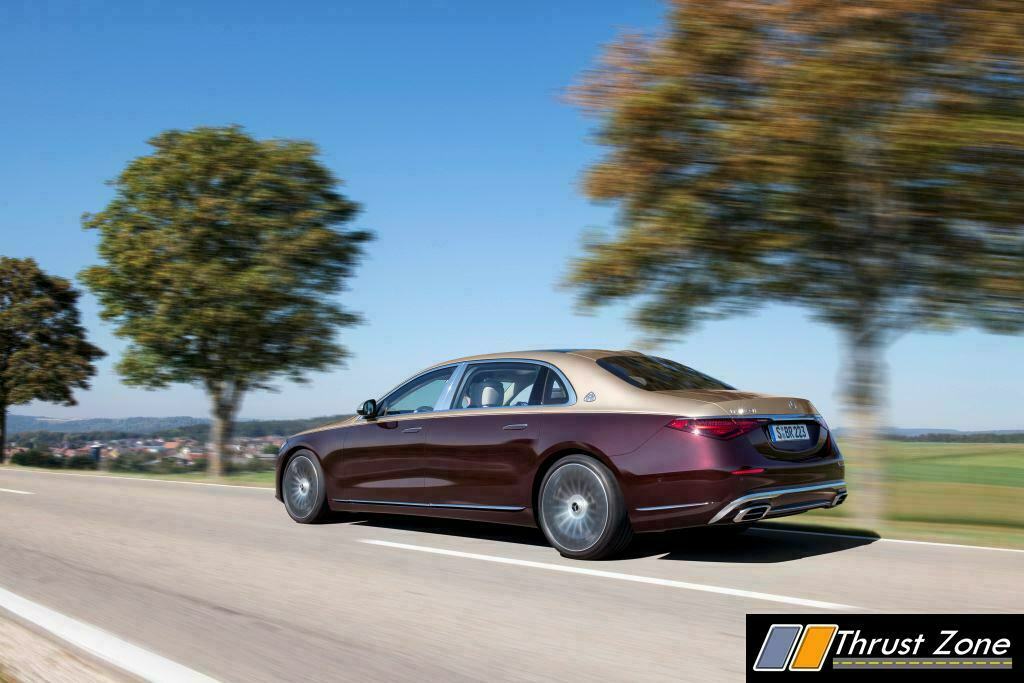 The Mercedes-Maybach S-Class has an 18-centimetre longer wheelbase than the long Mercedes-Benz S-Class: 3396 instead of 3216 millimetres.

The active ambience lighting has a total of 253 LEDs.

The counter-phased audio signals of the active road noise compensation must reach the human ear within around three milliseconds to overlay the road noise generated by the vehicle.

The temperature of the optional refrigeration compartment in the rear armrest is adjustable from +1 to +7 °C.

With the Chauffeur package, the backrest of the front passenger seat can be tilted forward by 23° beyond the 90° position. The longitudinal and height adjustment of the seat creates more legroom in the rear.

The maximum backrest angle of the Executive Seats is 43.5°. The most upright backrest position of 19° allows relaxed working in the rear.

Since the market launch in 2015, more than 60,000 examples of the Mercedes-Maybach S-Class Saloon have been delivered worldwide. In recent years, around 600 units per month went to China alone, and in 2019 the average even exceeded 700 units per month.

Painstaking application of the optional two-tone paint finish in the special paintshop can take up to 1 week.

When fully equipped, and if PRE-SAFE® Impulse Side and the beltbags are included, the interior of the Mercedes-Maybach has a total of 18 airbags.

40 Lakh Tata Cars On The Road – A Milestone Celebrated With A Special Video!

Dynamic Roadster Indeed! 2021 BMW S1000R Is More Purposeful Than Ever!