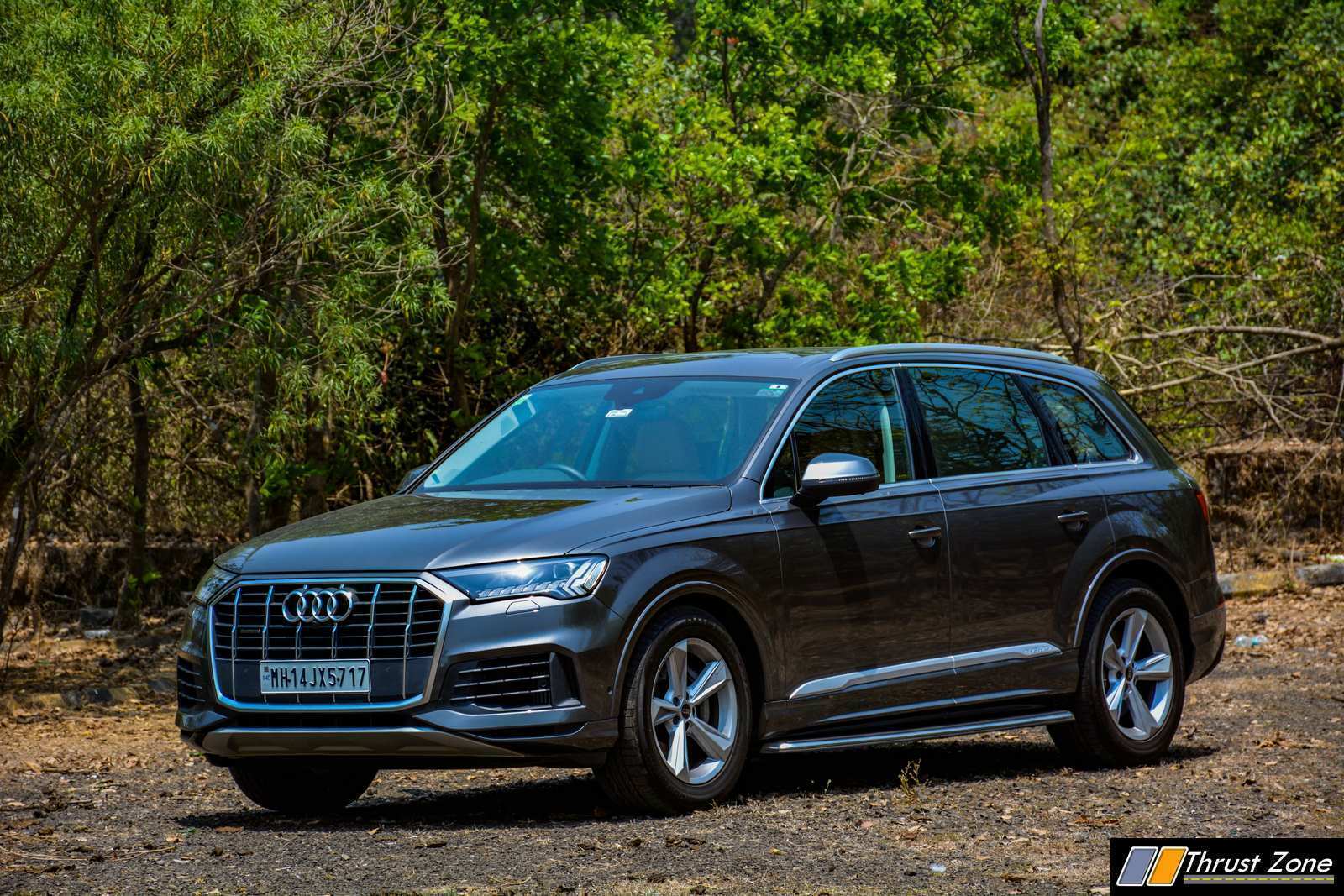 The Audi Q7 needs no introduction. The flagship model for the brand all this while till the Q8 came along has had a great history in India and worldwide. To housing the most powerful diesel engine in the world which was a V12 motor to the smallest 2.0 four-cylinder petrol motor here in India. The Q7 has had records broken and has been the pinnacle of the top-level luxury in the full-size SUV category that was solely dominated by Americans and one German rival. Q7 has seen it all. It was refreshed recently in late 2020 and it has now made it to India yet again. This time Audi has given it a much demanded V6 petrol motor with Quattro. Also, what are the changes inside out? We find out! 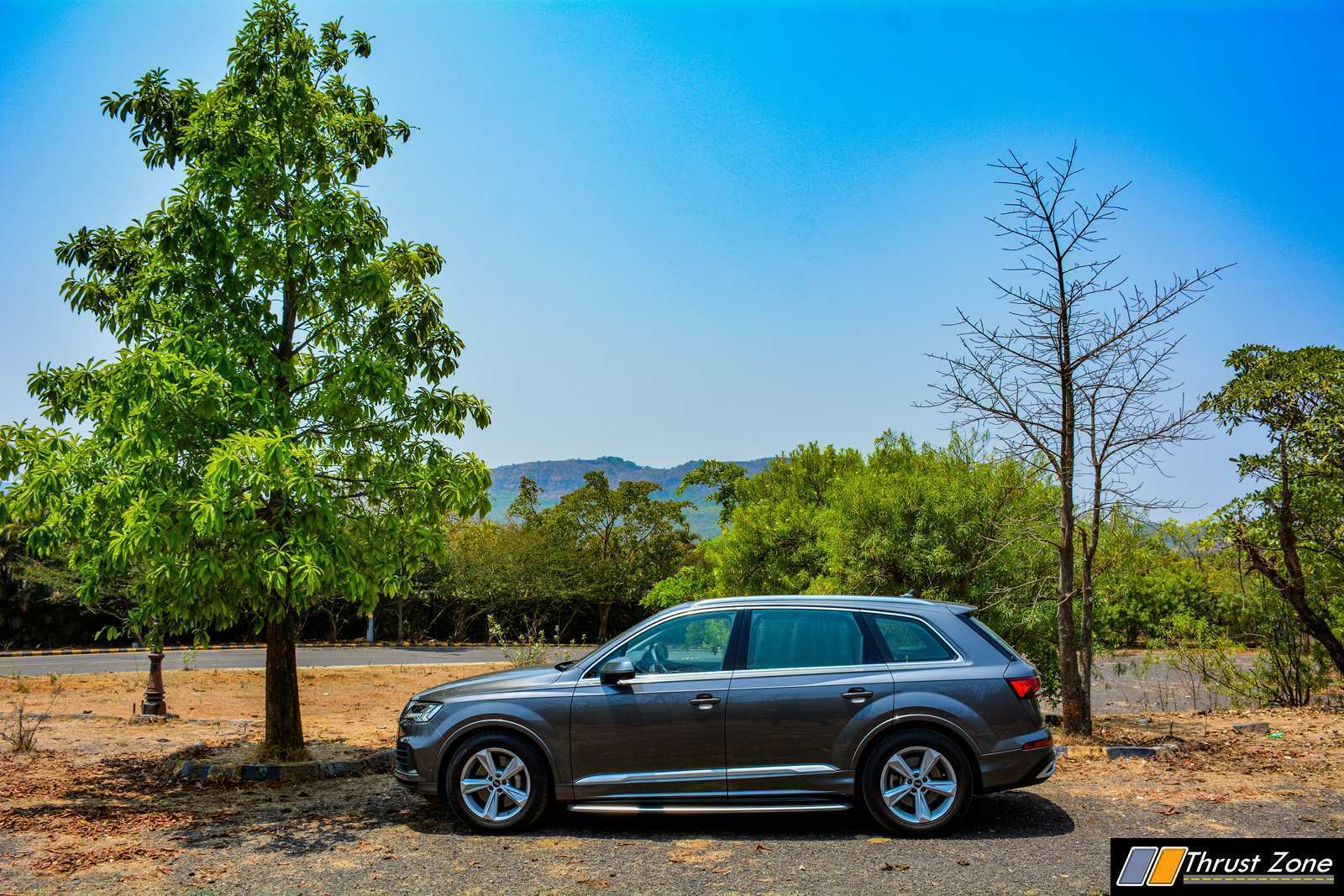 The design of the Q7 is more of a crossover than a boxy SUV. Q7 falls in the top-end segment thanks to its length, however, the not-so-tall stance and more than normal extra ground clearance over a normal car lend it the crossover template. The elements though, make it look cool and sophisticated just like any other Audi. The new large grille with the signature Q7 grey colour helps the Q7 stand out. The LED DRL lights in the head and tail-lamp units were, as always the highlights of the exterior. With a dynamic turn indicator and the way multiple units of small LEDs are shaped, it makes it unique from any of the past models or any existing Audi. 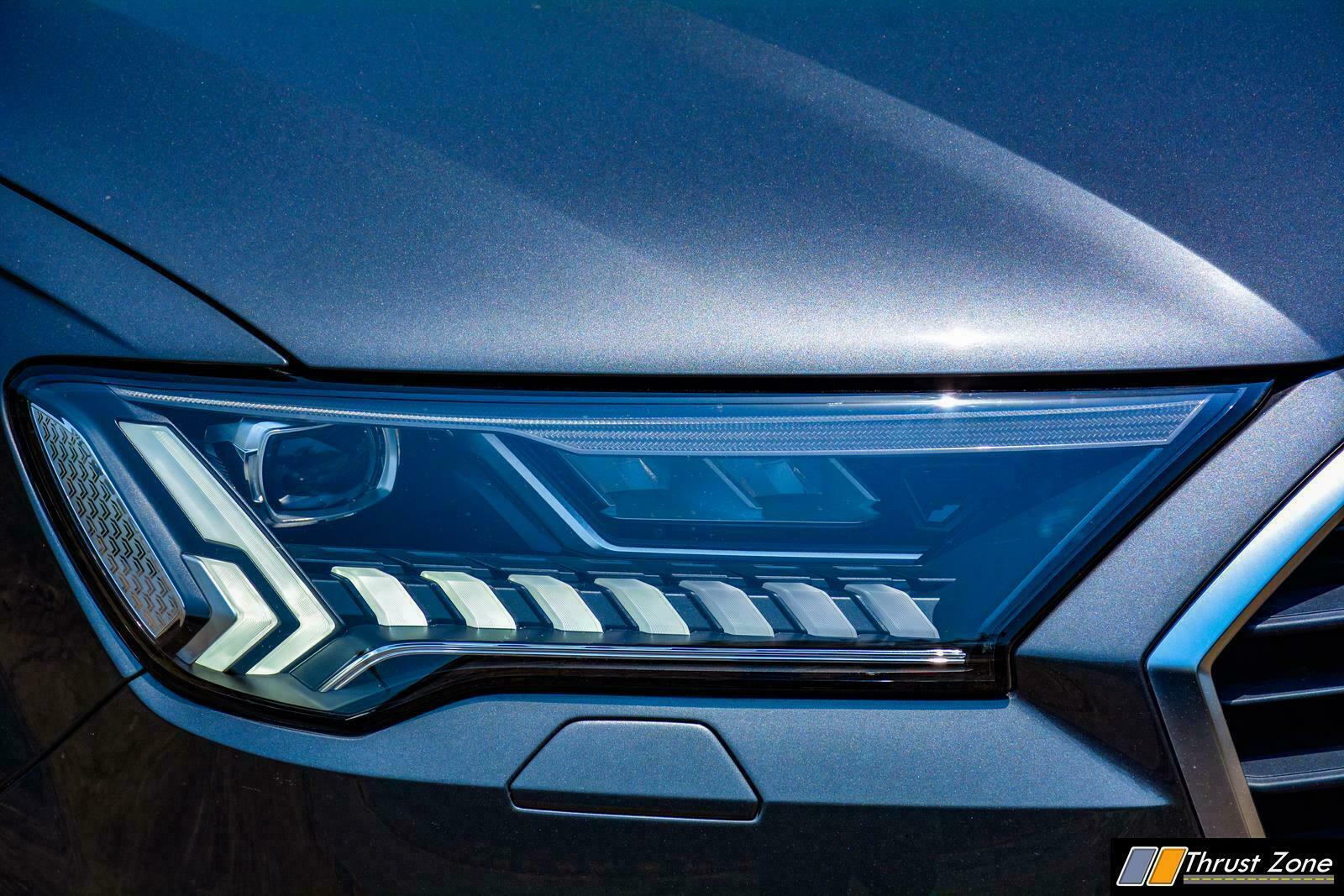 Also, with unique and bright illumination they make the SUV stand out in the day or night. The alloy wheels look basic and makes it overall look very contemporary. Better color can make the Audi pop out even more. The usual white should work better in its favor surprisingly. Overall, a standout car, despite as it has a reputation of its own thanks to its long-lasting affair with Bollywood. 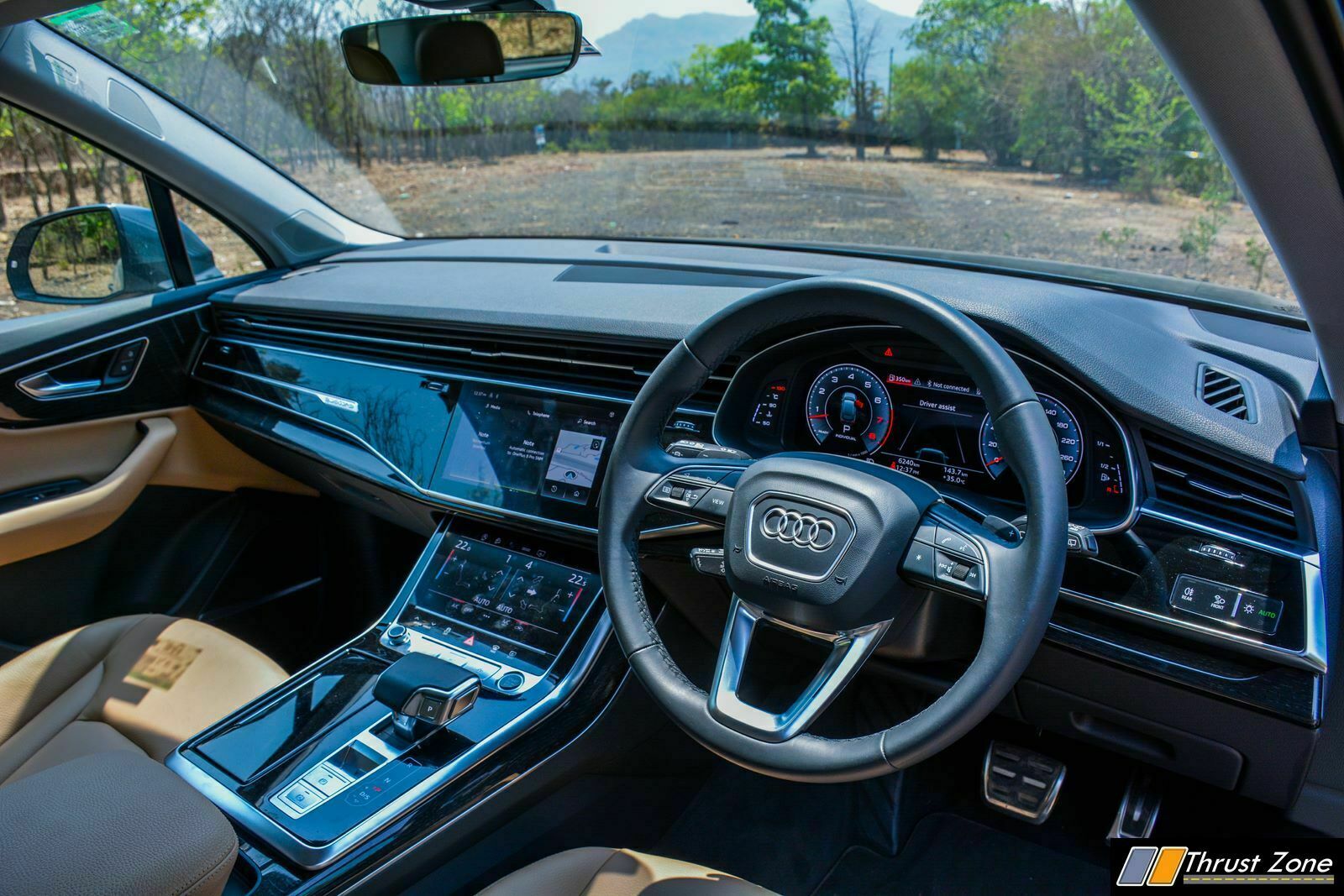 The interior quality of the cabin remains top-notch as always with any Audi. A minimalist approach can be seen with a screen in the middle, air vents that look special and all the features can be accessed through the centre console below via the second screen with bare minimum buttons and dials as everything goes touch. The touch screen is the most reassuring thanks to the most haptic actuation of buttons on a screen to date unseen in any other car. | 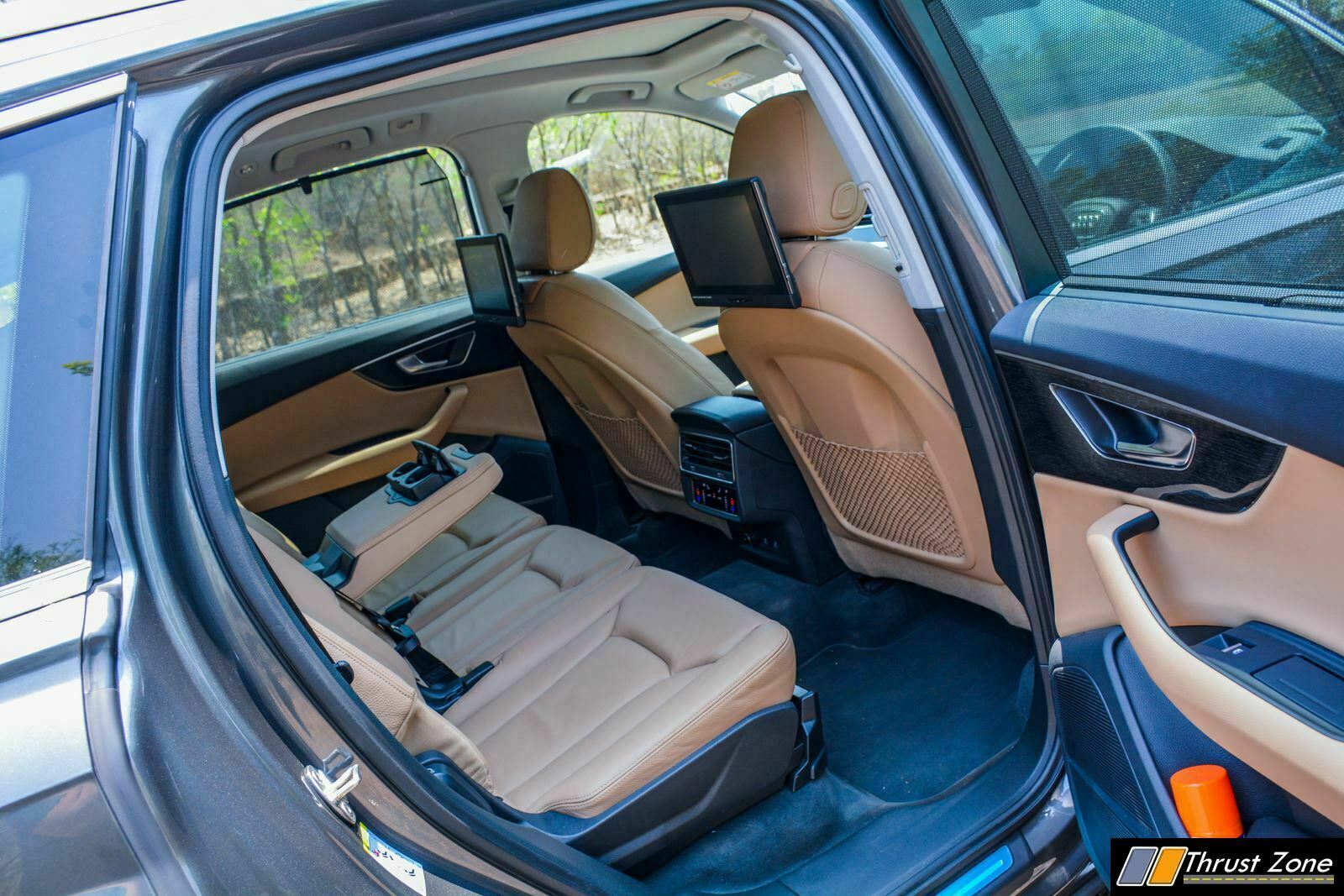 The long-running vents along the dashboard make it look futuristic but not all of it is vents as only 2-3 sections are which get the a/c vent shut/open dial. Space at the back is above adequate at best when it comes to the knee, shoulder, leg, and headroom. Boot space also stands at 600 litres. This makes it an SUV ideal for everyday commutes and weekend trips. 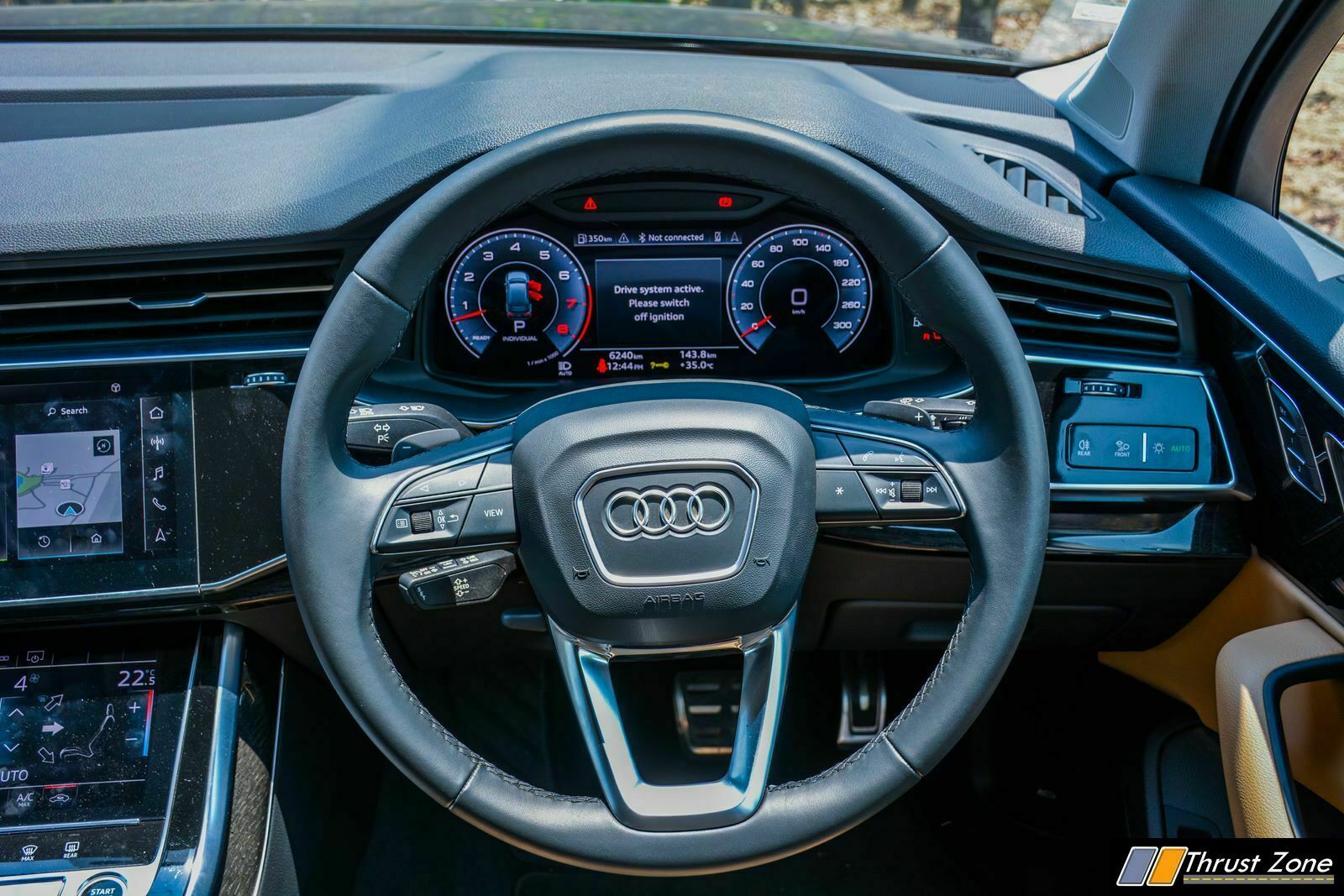 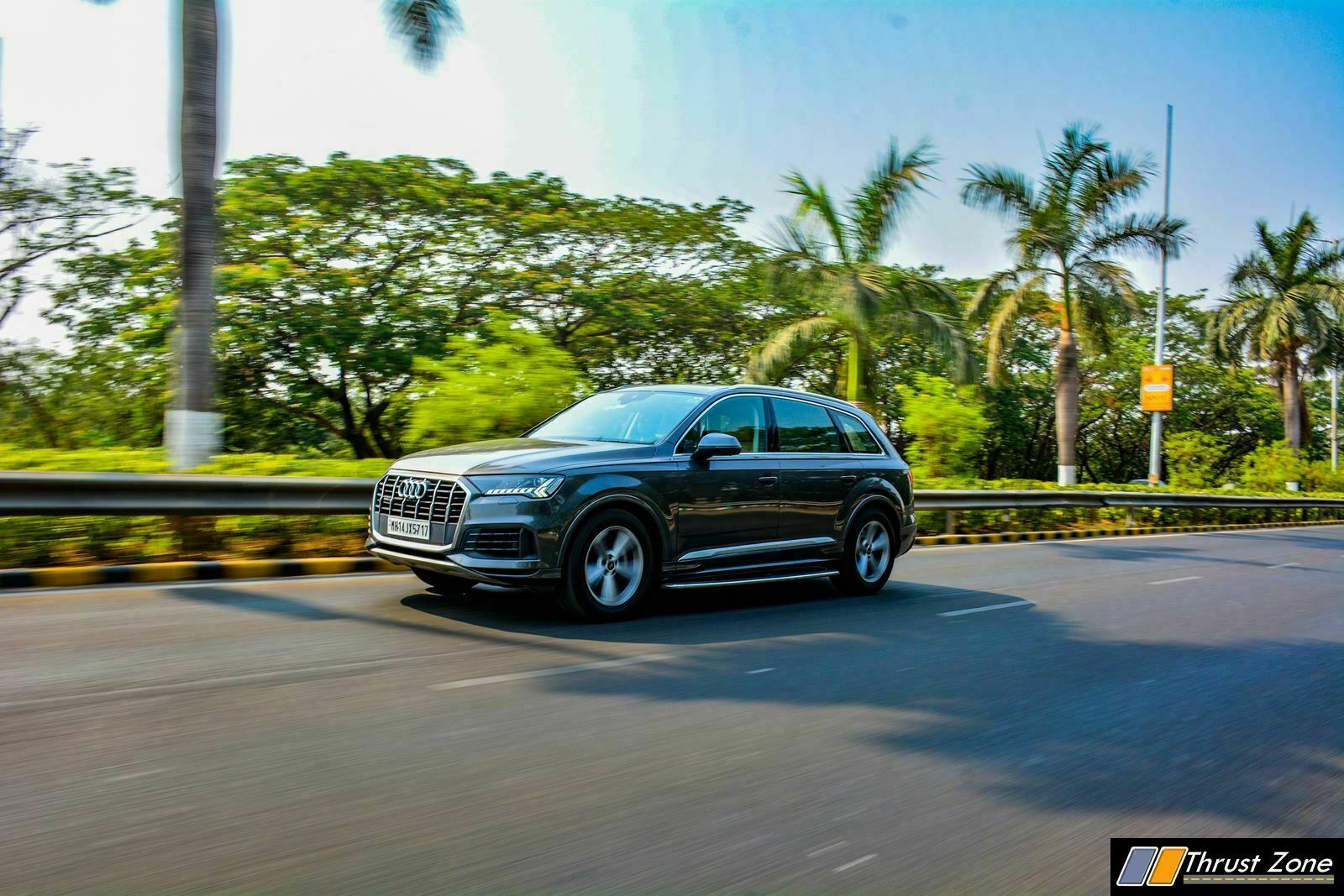 Despite hits and misses, the bigger highlight is the powertrain part this time around as it is spot on! 3.0-litre TFSi motor making 340 PS and 500 Nm of torque and all the power is going through the famed, quick and smooth shifting 8-speed gearbox which gives power to all four wheels instead of two as usual. A big car with a V6 and Quattro means it gets off the line very quickly. It just sprints ahead and gives you a feel of a much bigger car than it is. 0-100 km/hr is done in 5.9 seconds! 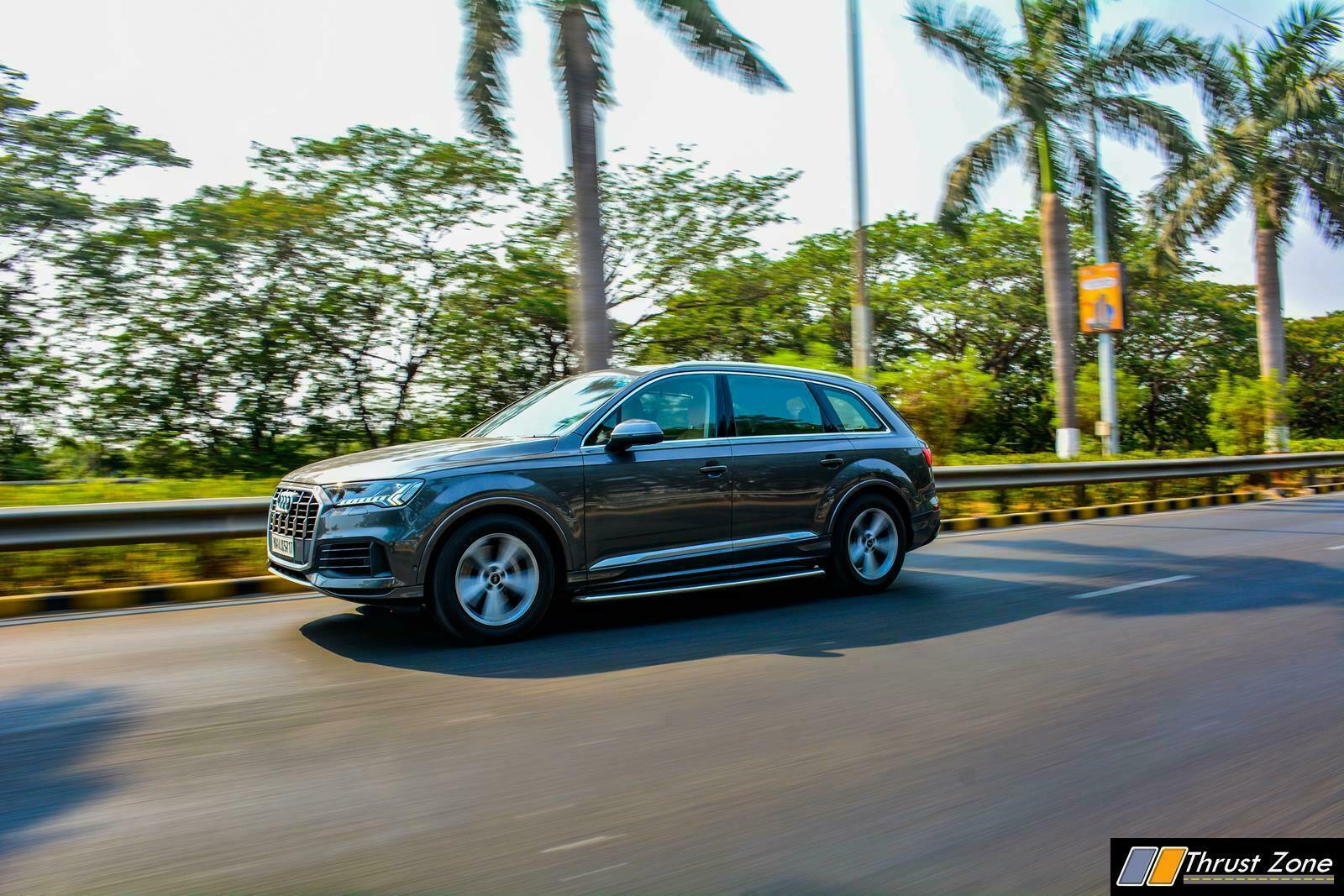 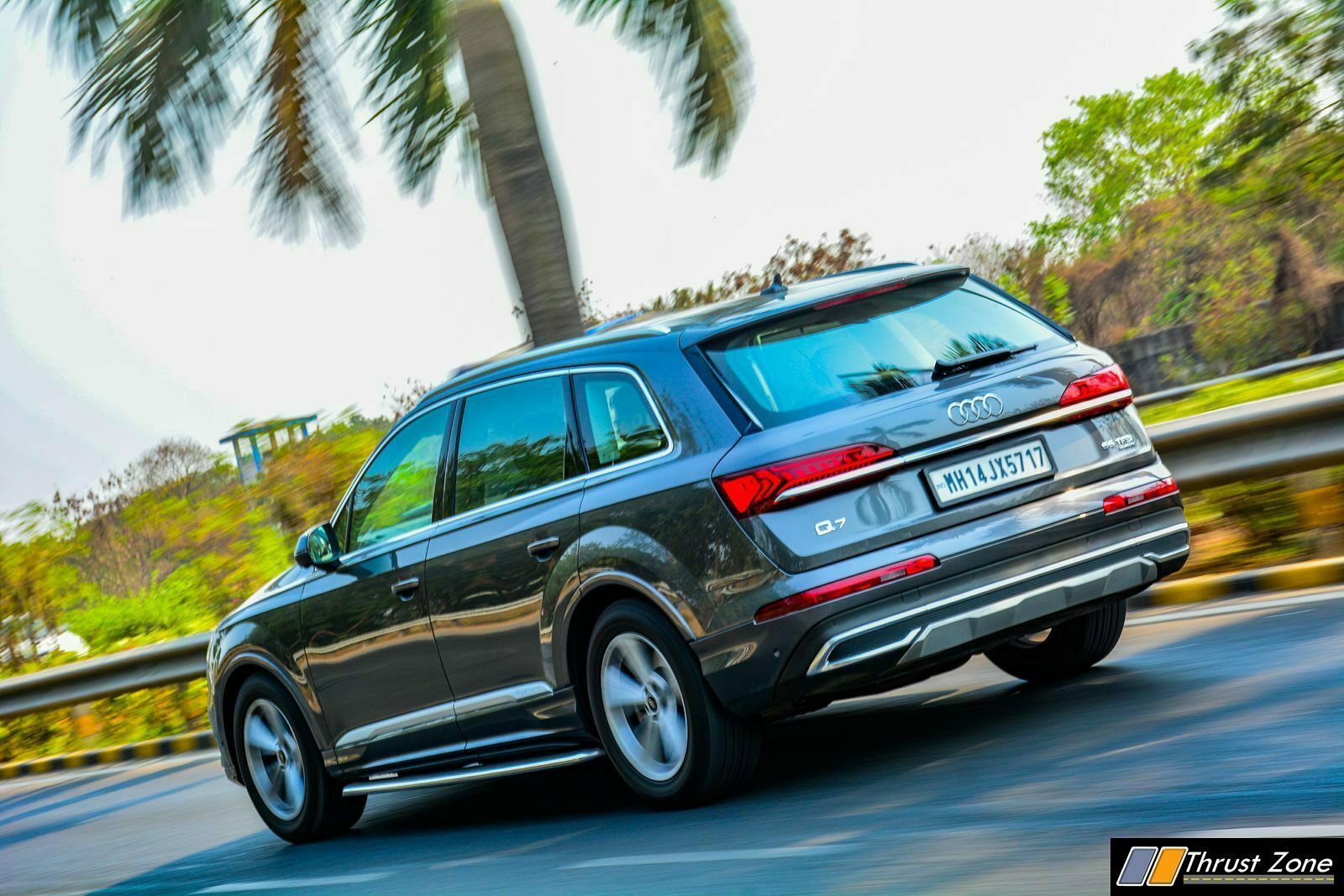 Dynamically, any Audi equipped with Quattro does have a very different steering feel to FWD Audi’s and it makes Audi quite sporty to drive and closer to its rivals. Steering feel and feedback are good enough and it weighs up well on the highway as well. Still not as good as a Mercedes, but better than the Volvo XC90. Braking was excellent as always with tires also helping make things better and confidence-inspiring. 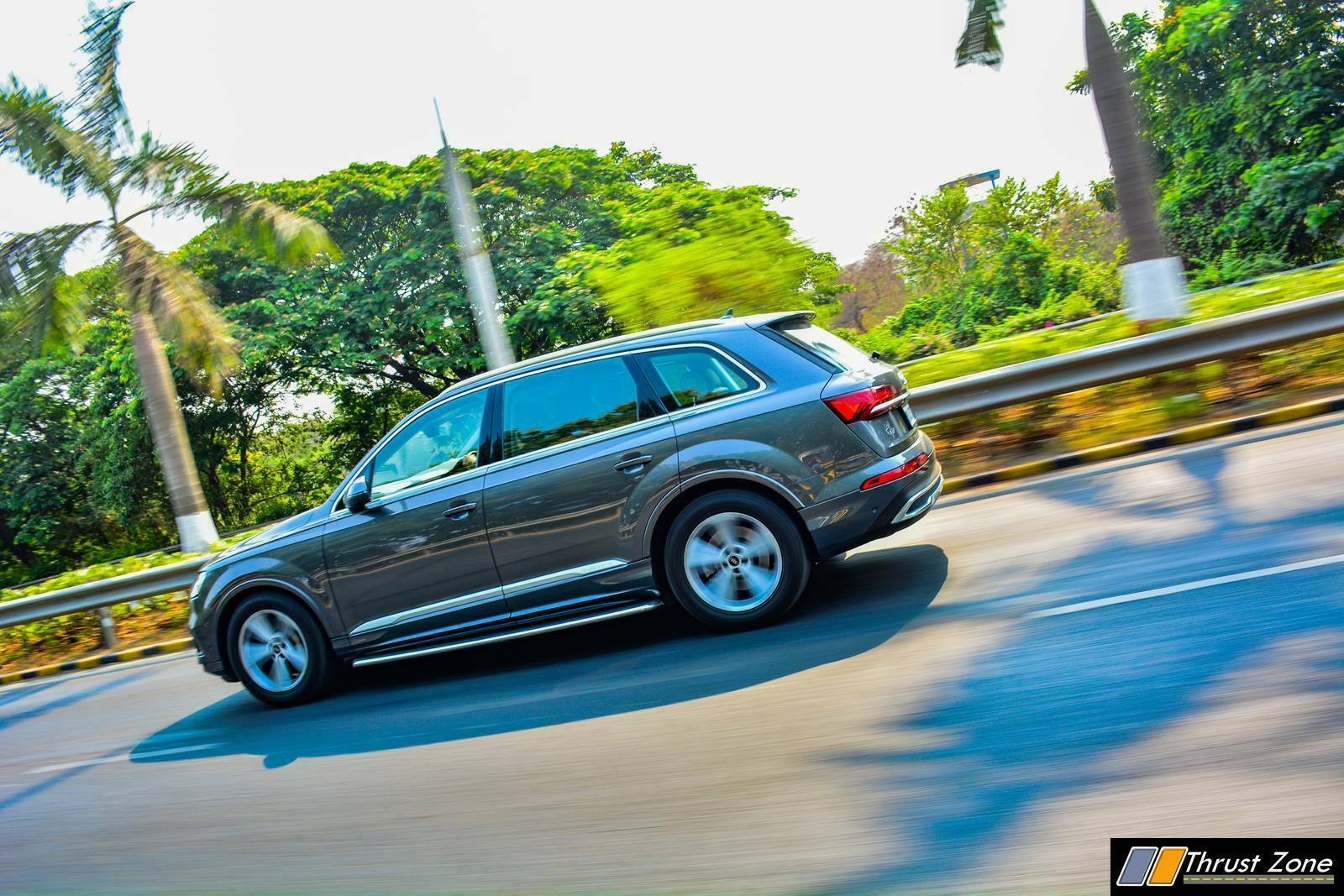 Going through corners, it does feel stable and agile but with a substantial amount of body roll involved. With a quick performance on tap and a car that feels confident thanks to Quattro and a suspension that is well-tuned for our roads, you can drive fast and have fun while being less concerned about unsettling you or your co-passengers. Maneuvering is easy at low speeds thanks to a very well-calibrated steering lock to lock ratio. 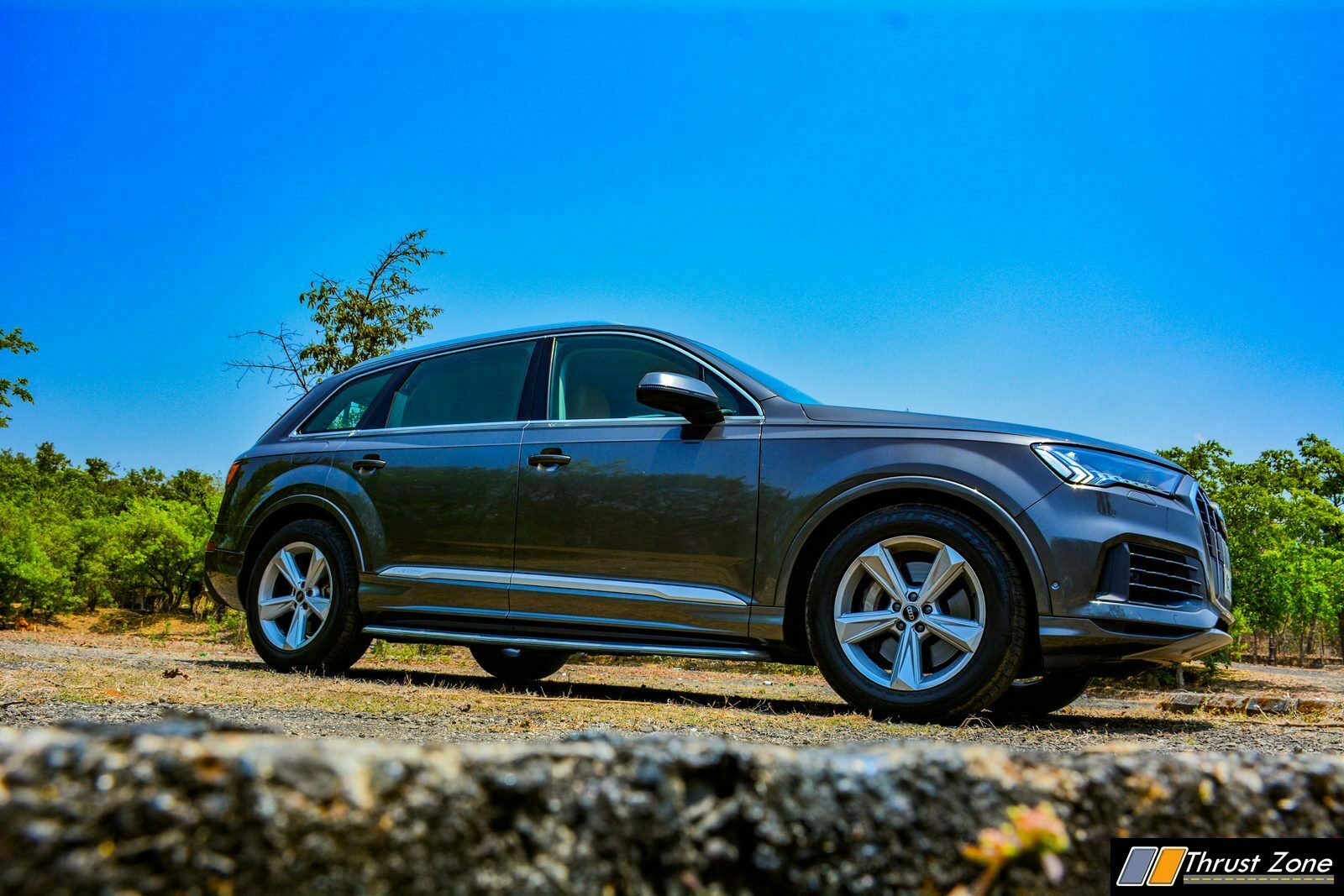 The Audi Q7 might not be updated the way we thought it would be but it does overcome most of the shortcomings its pre-facelifted version did. The Q7 is mostly a chauffered vehicle and it should easily impress customers in that aspect. The space, ride quality and comfort is extremely high, it almost gets all the technology that Audi can give it to it right now, but as we said, it deserves more at this price point.

The Q7 with the V6 petrol motor is a welcome move this time around, however, we expect the 2.0 litre to make come back as well in the future. Until then, enjoy any IC engine that comes your way because the top shelf of the entire cabinet of vehicles is the one that is getting fully electric in the next decade. The Q7 is all about history, the luxury, and badge value help stand tall in a battle that just got intense over the last few years.