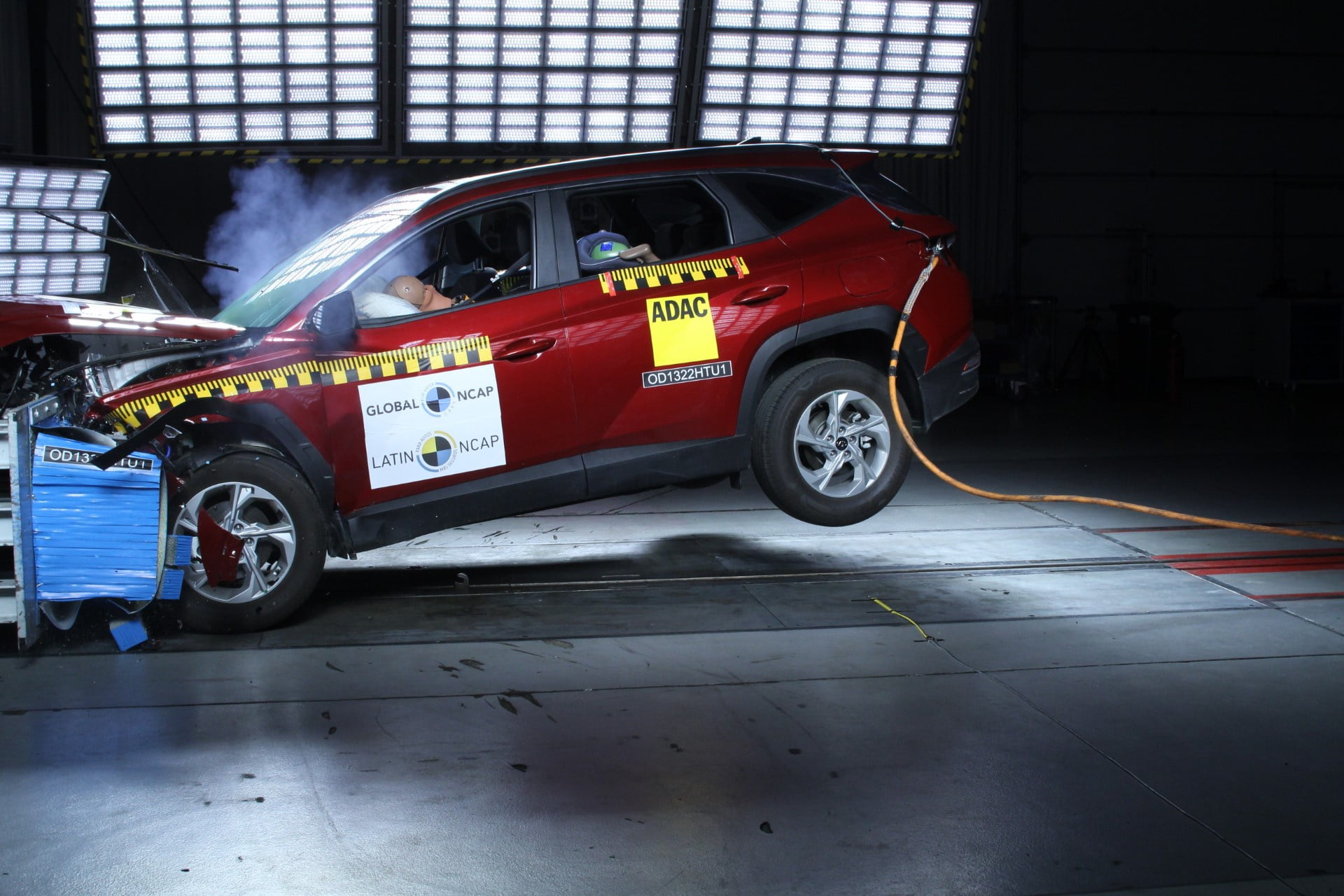 The New Car Assessment Programme for Latin America and the Caribbean, Latin NCAP, first publication for 2022 shows encouraging improvements after Hyundai’s reaction to Latin NCAP tests. The Hyundai Tucson, produced in Korea and Czech Republic, with two frontal airbags as standard, was rated with zero stars. The SUV achieved 50.23% in Adult Occupant box, 5.34% in Child Occupant box, 48.40% in Pedestrian Protection and Vulnerable Road Users box and 6.98% in Safety Assist box.

In India, both variants get six airbags as standard. Scoring just three stars for a premium SUV is something that will not be ideal for premium customers. However, the focus on ADAS should help thing make better.

In 2021 Latin NCAP tested the previous version of the Tucson with two airbags as standard in the basic version scoring zero stars. The manufacturer then claimed that the “New Tucson was better and safer”, so Latin NCAP decided to test the new Tucson in 2022. The new version of the Tucson was tested in frontal impact and side impact, whiplash and pedestrian protection. The lack of side curtain airbags as standard limited the score and better performance in Adult Occupant Protection. The lack of ISOFIX marking meeting Latin NCAP requirements and the standard lapbelt in the most basic safety spec in the rear centre position as well as the lack of passenger airbag disabling switch explain the low score for Child Occupant Protection. Pedestrian Protection was overall average, however it showed poor protection for some areas of the upper leg. Safety Assist box showed poor results as Electronic Stability Control (ESC) is not standard as well as speed limitation.

As a result of the latest Tucson zero stars, Hyundai decided to improve the basic equipment of the model adding standard side airbags, side curtain airbags, three point belts in all positions, i-size marking, seatbelt reminder for the front passenger position, ESC and speed limitation system. The updated model was tested and rated with three stars. The SUV achieved 81.61% in Adult Occupant box, 69.53% in Child Occupant box, 48.40% in Pedestrian Protection and Vulnerable Road Users box and 55.81% in Safety Assist box. The result is valid for units from VIN KMHJB81DBPU158713 and production date 2nd June 2022 for Korea production and from VIN TMAJB81DAPJ199084 and production date 4th April 2022 for Czech Republic production. 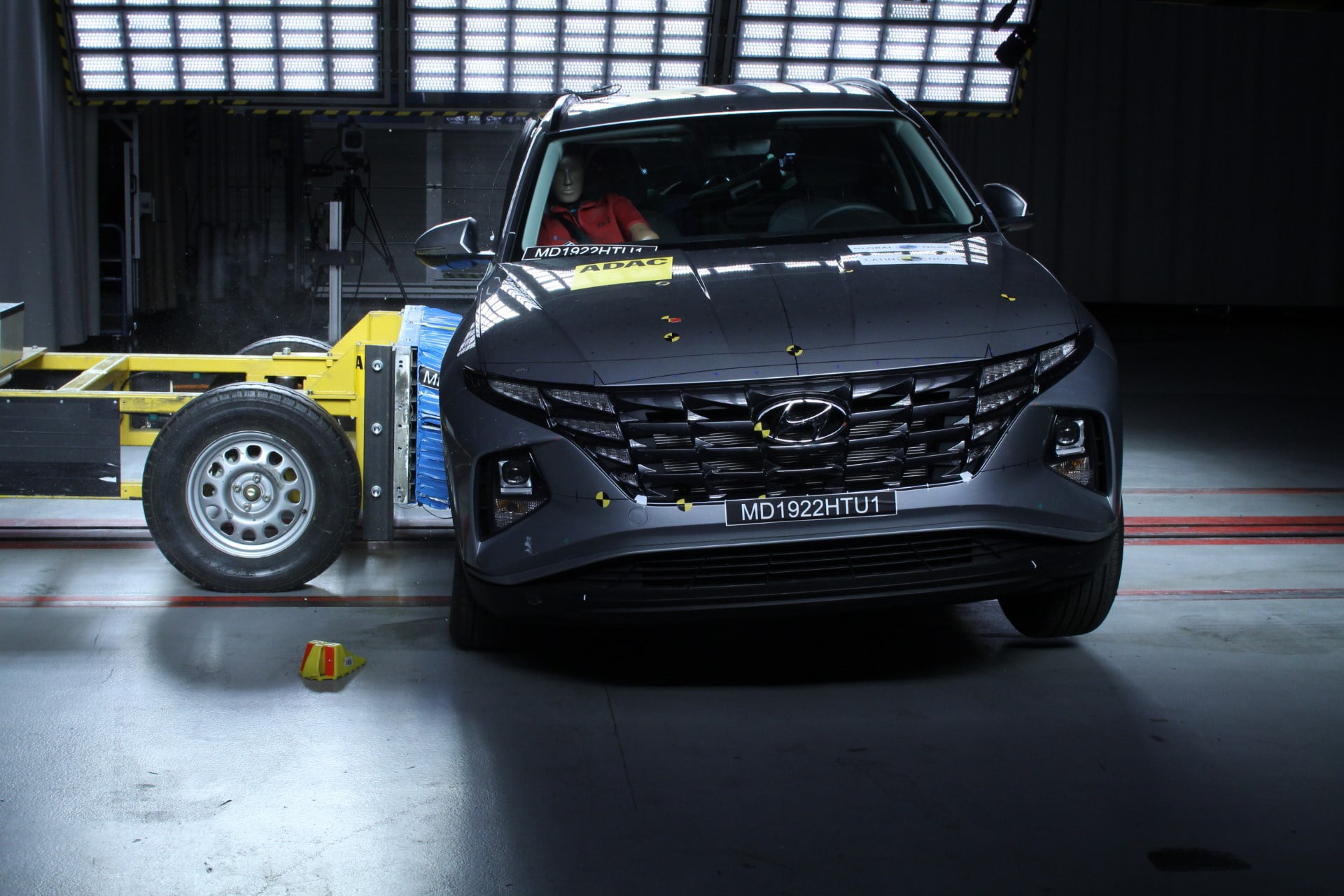 On top of the previous tests, the car was also tested in side pole impact, ESC, Moose Test and speed assist. These safety features showed satisfactory performance, together with the decision of Hyundai to update the I-size marking, and make 3 point belts standard among other improvements , explain the increase to 3 stars. Latin NCAP also tested optional equipment like Autonomous Emergency Braking, Lane Support Systems and Road Edge Detection, which all showed good performance but as they are in lower volumes than those required by Latin NCAP, they do not contribute to the score and star rating.

“It is encouraging to see manufacturers like Hyundai reacting so fast and positively to Latin NCAP’s tests and we hope that this strategy is also followed in other popular models of the manufacturer. This test also shows that claims of so called new models or replacement models can be misleading and do not necessary mean safer performances unless they are developed and equipped for such thing. Latin NCAP strongly believes that as Hyundai increases the availability of ADAS technologies as well as small aspects of the Tucson, it can reach higher scores. Latin NCAP has showed once again that the testing models can cause voluntary improvements from car makers in short periods of time”.

“We welcome Hyundai’s decision to improve Tucson’s safety, even though it just reached 3 stars. Along the same line, there are improvement opportunities for the brand for its most popular models. We hope that soon all Hyundai models will achieve a rating equal to or higher than what we see today with the Tucson. It is urgent that more and more models add advanced driving assistance technologies and to follow the recommendations of the Global Plan for Road Safety proposed by the UN, for the good of all road users and for a true democratization of vehicle safety”

2022 MG Gloster Launched With Updates To ADAS And Other Features