2023 Ducati Monster SP Is A Firecracker Waiting To Be UNleashed 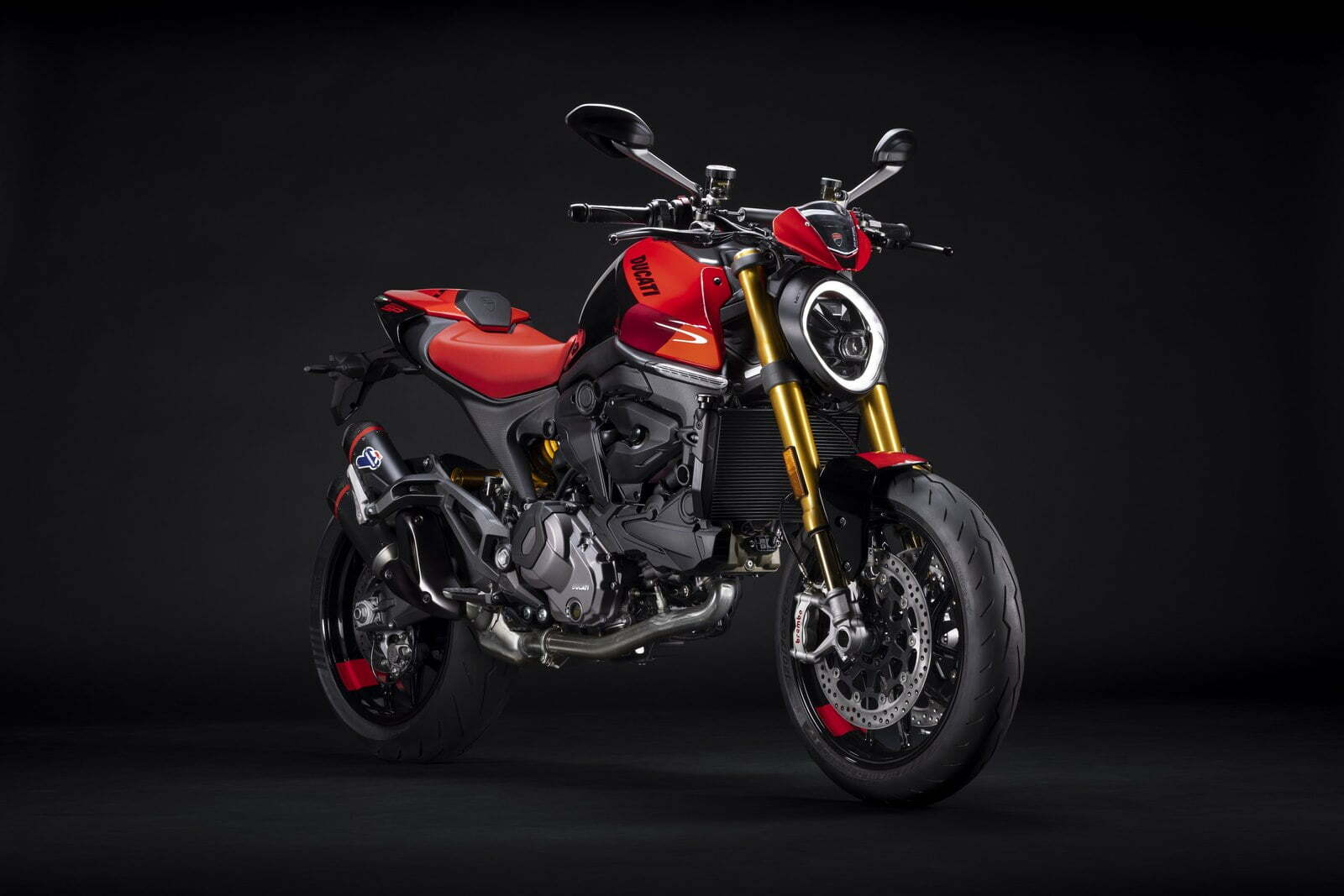 Presented in 2021, the Monster represents all the essence of Ducati in the most compact, essential and lightest form possible. The recipe is the original 1993 one: a sporty engine, but perfect for road use, combined with a Superbike-derived frame. Everything you need to have fun, every day. The heart of the Monster is the Testastretta 11° engine , a liquid-cooled 4-valve twin with 111 hp and desmodromic distribution. Its Front Frame, inspired by that of the Panigale V4, is an extremely light and compact aluminium frame fixed directly to the engine heads. It is the modern reinterpretation of the recipe that gave life to the Naked segment of motorcycles, which is now making new generations of Monsteristi fall in love with it.

A concept as simple as it is effective, which takes a further step forward with the arrival of the Monster SP. This model is characterized by a series of high-quality components that make the bike even lighter, more effective and fun in sporty riding, as well as more aggressive from an aesthetic point of view.

The sporty nature of the Monster SP can be seen immediately thanks to the livery that incorporates the 2022 colours of the Ducati Lenovo Team’s Desmosedici GP , the golden anodizing of the Öhlins NIX30 fork and the presence of a Termignoni approved silencer as standard. Particularly high-quality details are the red saddle, which is integrated with the tail in the side view, the Monster SP logo on the passenger seat cover and the Ducati logo on the fuel tank, larger and inspired by the Panigale V4 graphics. 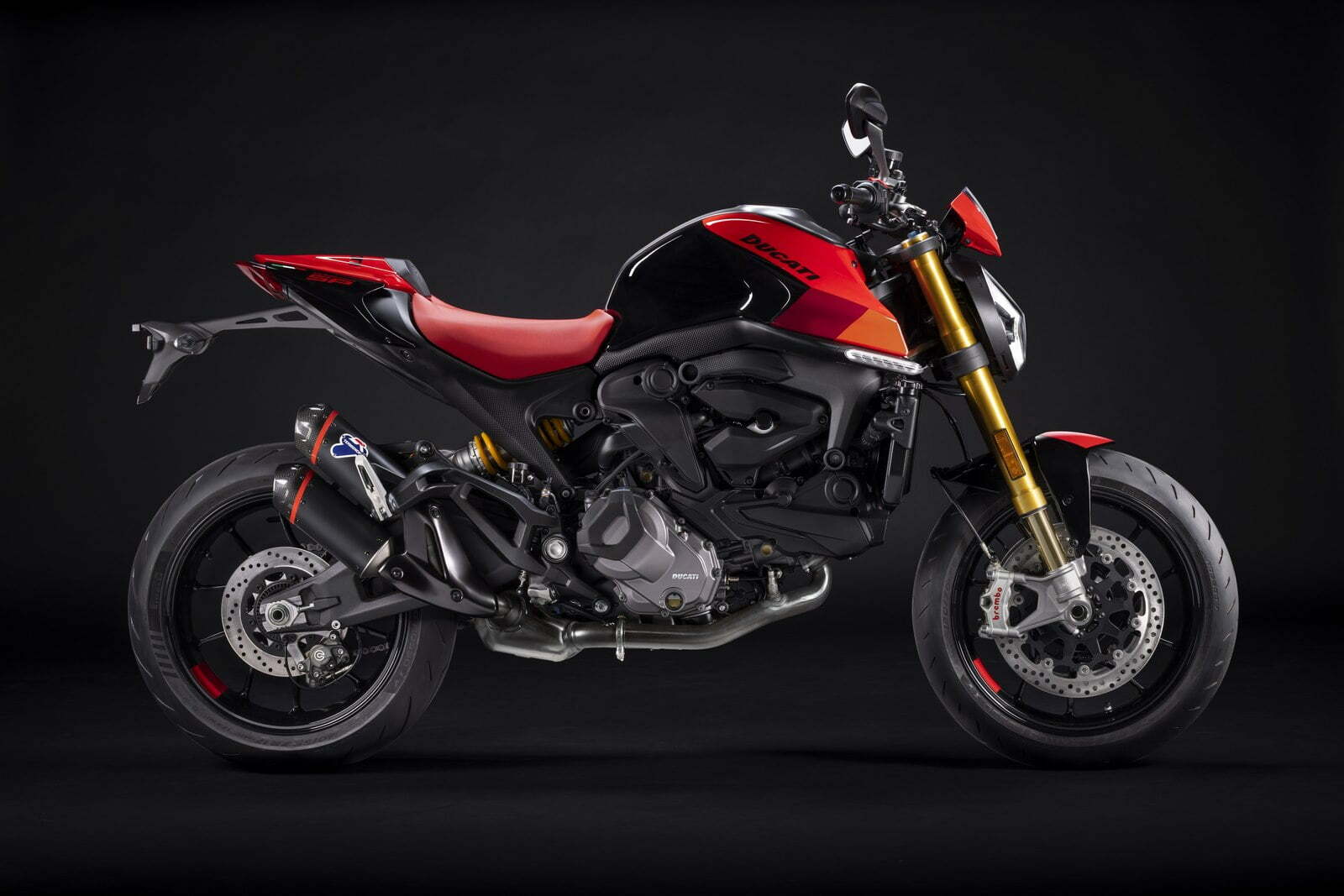 The fully adjustable Öhlins suspension, with the fork 0.6 kg lighter than the one used on the Monster and Monster +, increase the feeling, as well as the ground clearance and consequently the lean angle. The suspension system can also count upon a sportier calibration, which improves the dynamic qualities of the Monster SP when riding on mixed roads and opens the possibility of having fun even among the curbs of a circuit.

Also in this direction, the upgrading of the braking system with Brembo Stylema® calipers and aluminium flanges for the 320 mm front brake discs (0.5 kg lighter than the Monster equipment) makes the Monster SP more performing when braking, but, at the same time, more agile thanks to the reduction of inertia at the front.
The general lightening of the bike also comes with the adoption of a lithium-ion battery, which brings the overall weight saving to about 2 kg in running order compared to the standard model (already a benchmark in the category for lightness), despite the addition of components such as the steering damper and the windshield.

The sporting potential of the Monster SP is further enhanced by the steering damper, which improves stability under acceleration and cornering, as well as by the presence as original equipment of Pirelli Diablo Rosso IV tyres, the manufacturer’s flagship proposal for sporty riding on the road. In addition, the electronics see a general recalibration of all the Riding Modes, and therefore of all the electronic controls, to make the most of the changes made to the chassis, and the arrival of the new Riding Mode Wet, designed to offer greater safety on the bikes on wet surfaces. 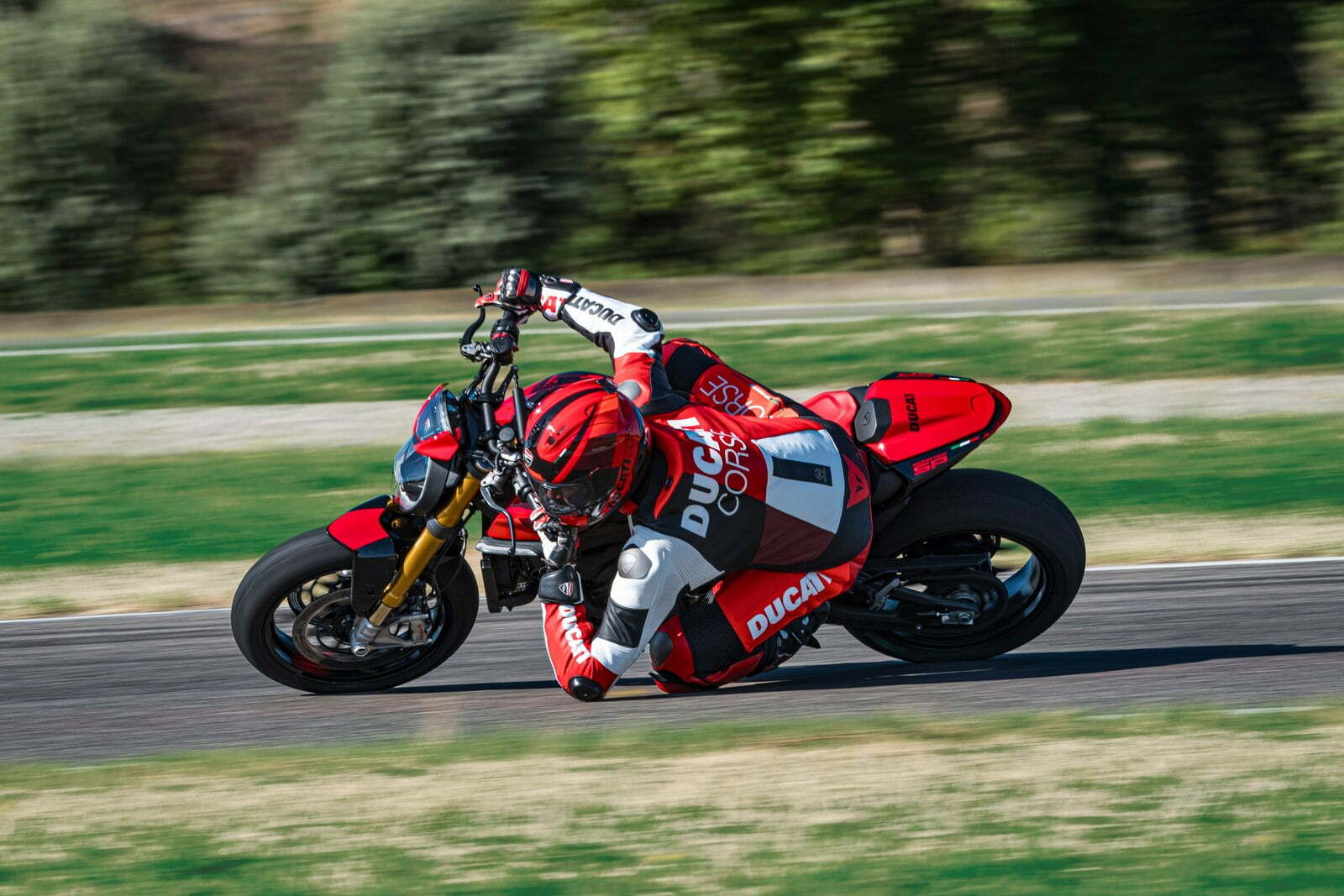 The electronic sector of the Monster is at the top of the segment. The standard equipment includes ABS Cornering, Ducati Traction Control and Ducati Wheelie Control, all adjustable to various levels of intervention. The sporty character of the new Monster SP is also underlined by the Launch Control which ensures lightning-fast starts. This top-of-the-range motorcycle equipment allows the Monster SP to safely express its full performance.

The Sport, Touring and Wet Riding Modes allow the rider to shape the Monster’s character according to tastes and needs. Everything is easily managed through the handlebar controls and the 4.3” colour TFT dashboard, featuring racing graphics that echo those of the Panigale V4, with a large rev counter and a complete set of information on the left, including that of the gear engaged.

The Ducati Monster SP will arrive in dealerships starting from January 2023, also in a depowered version for riding with an A2 license*.

IDFC First Bank Customers Can Recharge Their Fastag Via Whatsapp