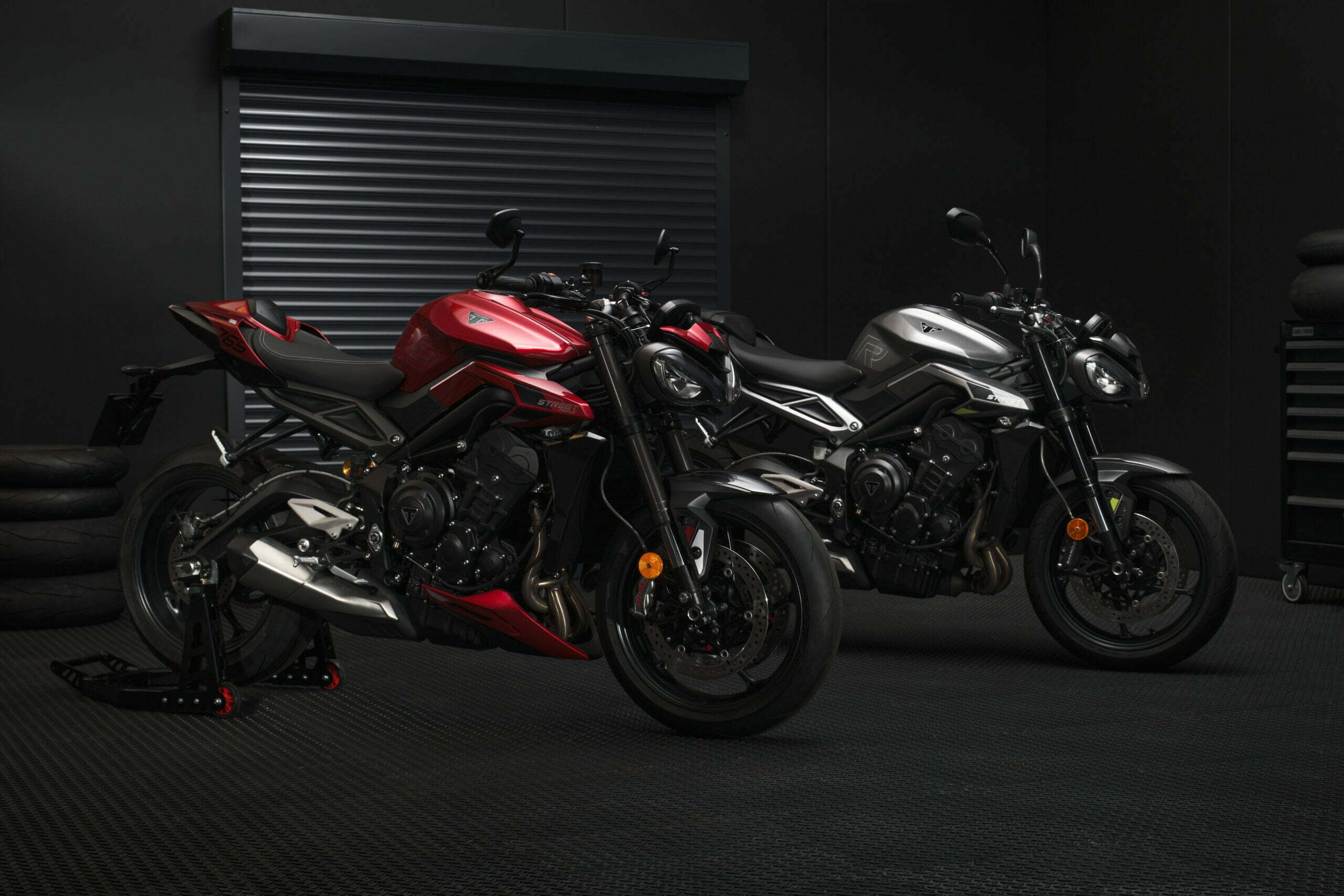 Triumph motorcycles has started pre-bookings for the all-new 2023 Street Triple 765 Range. Bookings are open across all Triumph dealerships with an initial amount of INR 50,000. The race-powered naked sports motorcycle is one of the most anticipated motorcycles from the British marquee. New for 2023, this is the most powerful and poised Street Triple 765 line-up ever, with a major update to the Street Triple R, making this the new definitive streetfighter, and a new Street Triple RS which sets a whole new benchmark for performance naked sports.

Engine upgrades derived directly from the Moto2TM race engine programme result in a significant step up in performance on the new Street Triple R plus category-leading power for the new RS and Moto2TM Edition, with increased torque and improved responsiveness across all three new 765 powered models. Complementing its aggressive new styling, the enhanced ergonomics and highest ever specification make this latest generation of the legendary and award-winning Street Triple the most agile and precise handling ever. 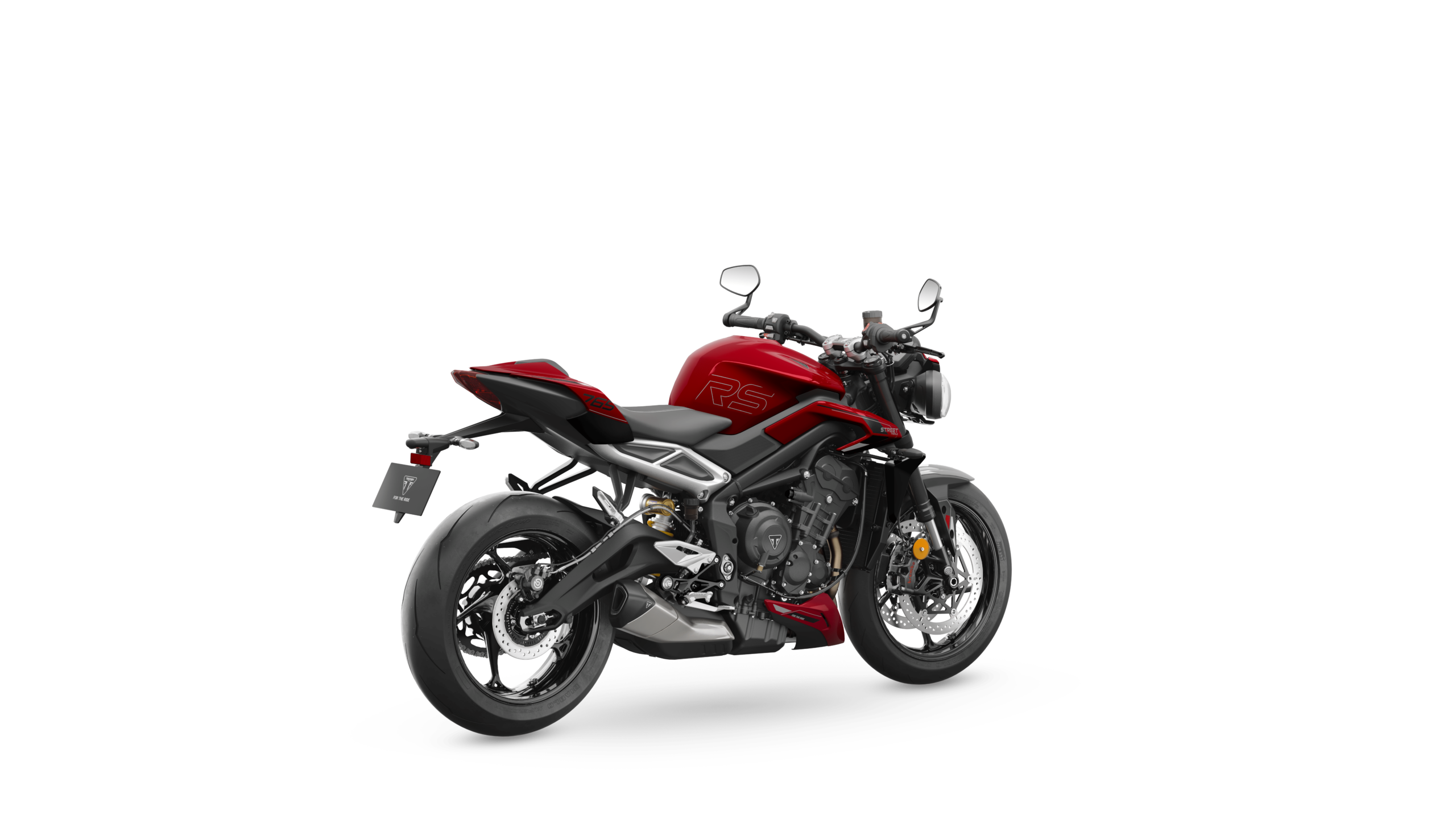 STREET TRIPLE 765 RS
Incorporating all the new technology, chassis and styling enhancements of this greatest ever generation, the 2023 Street Triple 765 RS adds the highest ever specification Brembo Stylema brakes, revised geometry for even more agility, and sets a new performance benchmark as THE most powerful Street Triple ever, with a category leading 130PS of thrilling triple power, thanks to Moto2TM race engine derived upgrades. 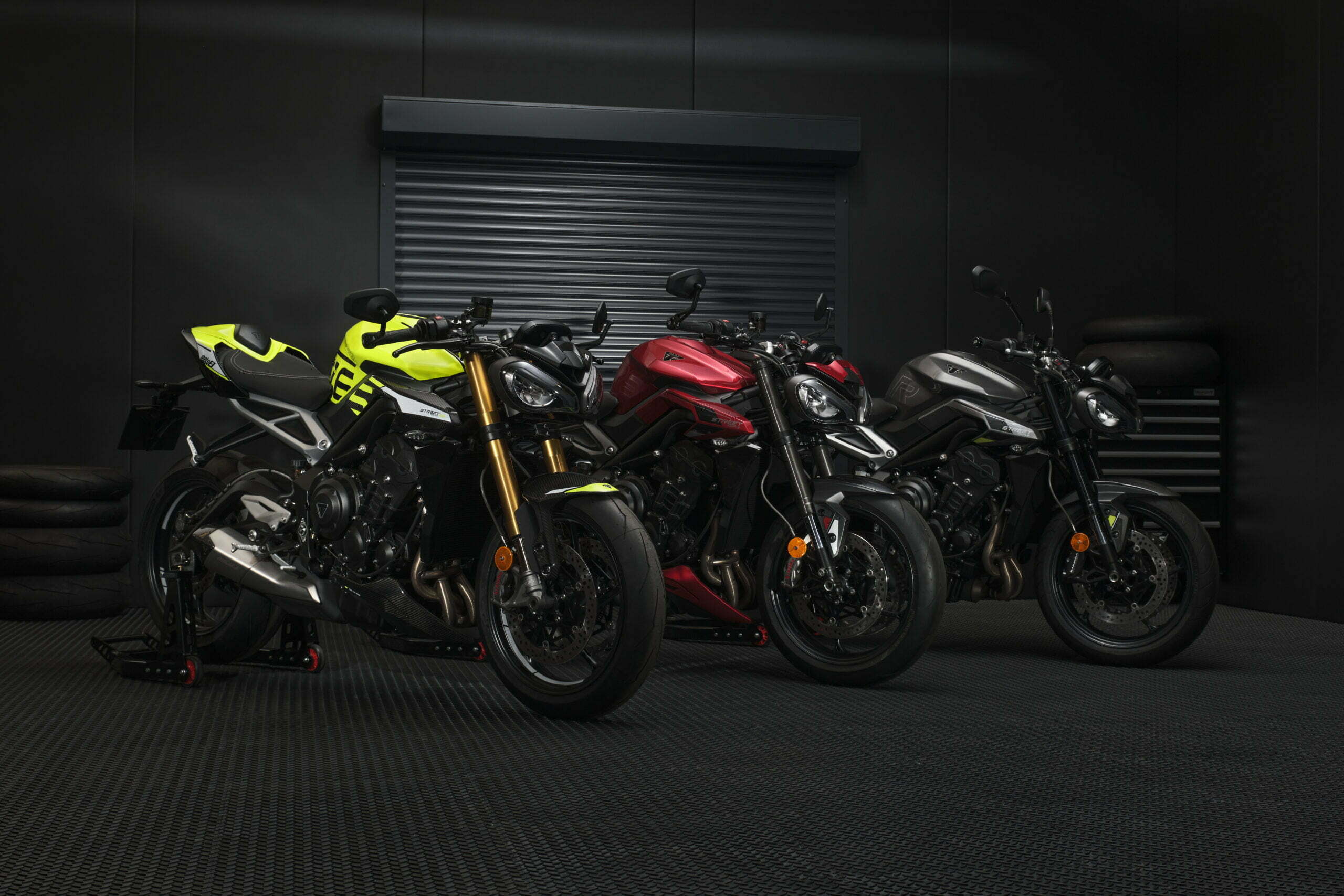 STREET TRIPLE MOTO2TM EDITION: This is not for Indian market

Limited to just 765 of each of the two race-inspired colour schemes, the 2023 Street Triple 765 Moto2TM Edition completes the new line-up as the highest specification Street Triple ever. All the new generation’s major step-up in capability and attitude, combined with the class leading power and torque of the RS, plus an even more engaged and focused ride, courtesy of unique clip-on handlebars and Öhlins fully adjustable forks deliver super-sharp and precise handling for both road and track. Carbon-fibre bodywork, official Moto2TM branding, a unique Moto2TM start-up screen and an individually numbered top yoke mark this stunning machine out as the ultimate Street Triple.

Thanks to major upgrades derived directly from the Moto2™ race engine programme, the 765cc triple engine now delivers a step up in power and performance, at 120PS, for the new Street R, and a category-leading peak power of 130PS on the RS and Moto2™ Edition. Torque is also up across all three models, exhilarating from low down and all the way through the rev range, peaking at a new 80Nm. Being a triple, its blend of usable low and mid-range torque and thrilling top-end performance makes for an exhilarating and characterful ride. The world renowned engine is more responsive than ever, too – in addition to significant component updates, its shorter gear ratios deliver faster acceleration making this latest generation of Street Triple the sharpest and liveliest yet. 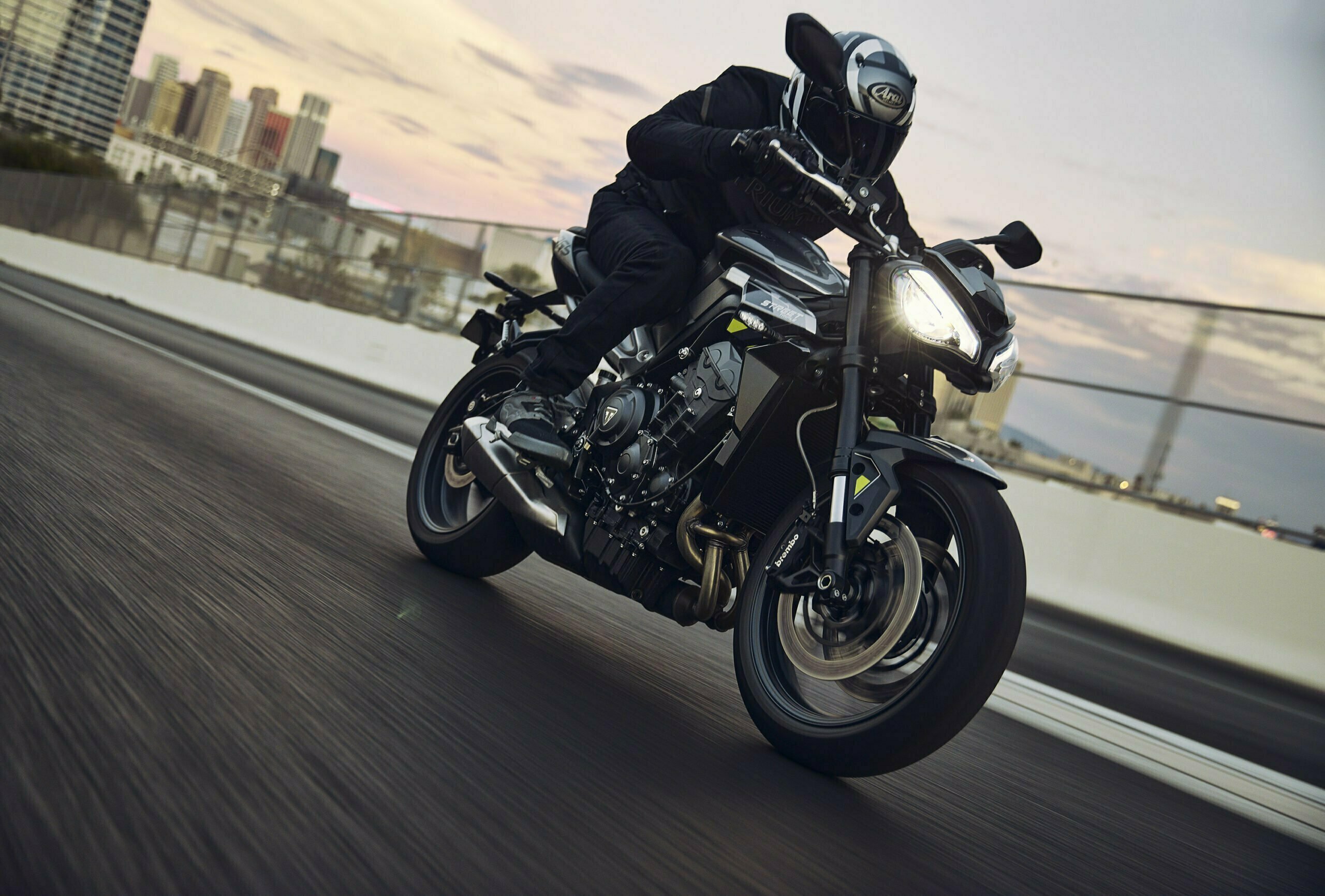 Significantly updated class-defining 765cc engine
Learnings taken directly from the Moto2™ race engine programme have been applied to the 2023 Street Triple engine, making it more performance-focused and characterful than ever. The compression ratio has been raised from 12.65:1 to 13.25:1 – an increase of 4.7%. New pistons, con-rods and gudgeon pins are matched to new, optimised combustion chambers for an increased cylinder pressure limit and, ultimately, more power. New valves and camshafts give increased valve lift for improved intake, combustion and exhaust efficiency, with new gearbox ratios for improved performance and responsiveness.

The Street Triple’s outstanding performance and top-end power has been taken to the next level for 2023. The R peaks at 120PS at 11,500rpm, whilst The RS and Moto2™ Edition now produce a category leading 130PS at 12,000rpm, with all three models benefiting from the same usable torque low down in the rev-range and all the way through the mid-range with a notable increase from 7,500rpm onwards. Peak torque of 80Nm arrives at 9,500rpm.

For 2023, the gearbox has been revised to include shorter gear ratios for faster acceleration. Together with a new final drive ratio, the Street Triple is now sharper, livelier and more responsive than ever. Combined with the increase in power and torque, which brings a notable improvement in performance, the Street Triple 765 cements its position as the class benchmark.

Further updates include a new exhaust system with increased flowrate, as well as a new sporty single-sided silencer, which delivers the Street Triple’s renowned and distinctive hair-raising sound. 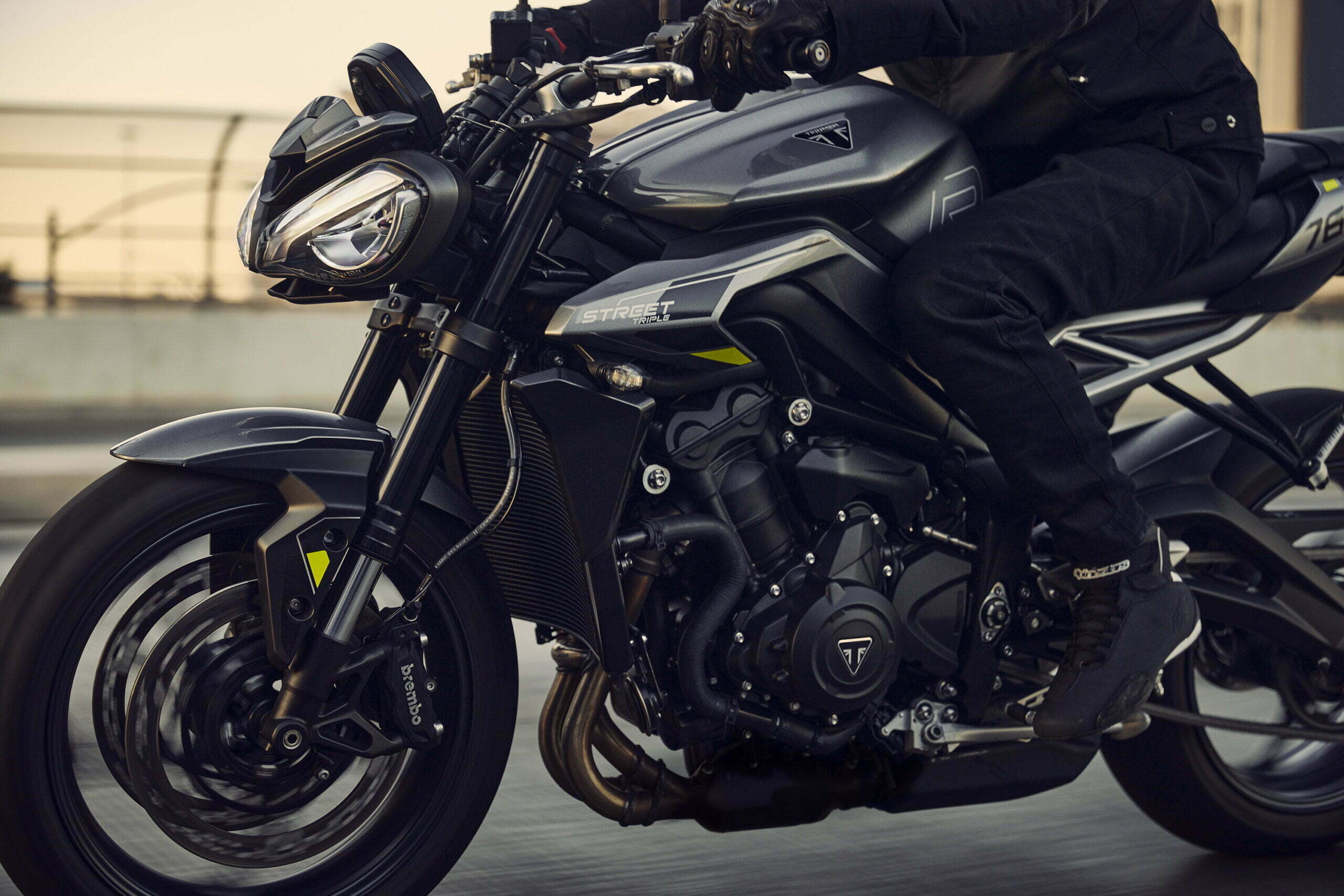 New technology, new high-specification components and the most agile Street Triple chassis to date, together with the optimum weight and balance, make the 2023 Street Triple range the best handling ever and the perfect performance naked sports set-up.

The 2023 Street Triple R and RS both benefit from the new generation’s more focused and commanding riding position, thanks to the new 12mm wider handlebars. The race-inspired Moto2™ Edition goes one step further again with clip-on handlebars, that are 80mm lower and 50mm further forward than the R and RS, which combined with its unique high-specification Öhlins forks, delivers even more race bike poise and front end feel for the most dynamic Street Triple ride ever.

Both the RS and the Moto2™ Edition feature revised geometry with a steeper rake and a raised back end for nimble, faster turning. Still as surefooted and planted as ever, these improvements sacrifice none of the confidence-inspiring attributes that the Street Triple has become renowned for. 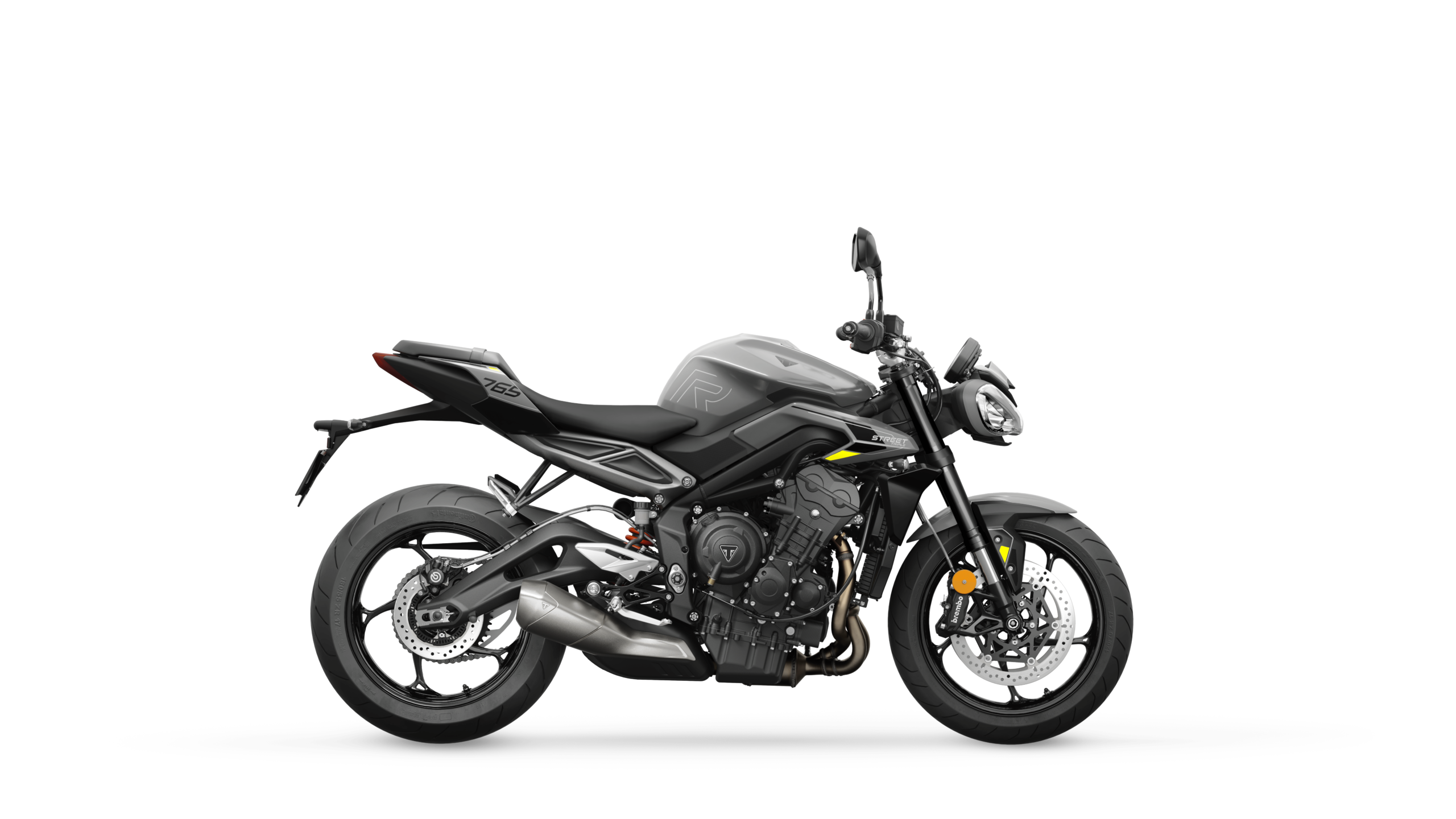 The Street Triple R comes with the versatile and well-regarded Continental ContiRoad tyres, which offer superb levels of grip in both wet and dry road conditions. This makes them the ideal choice for all-season commuting as well as fast road riding. 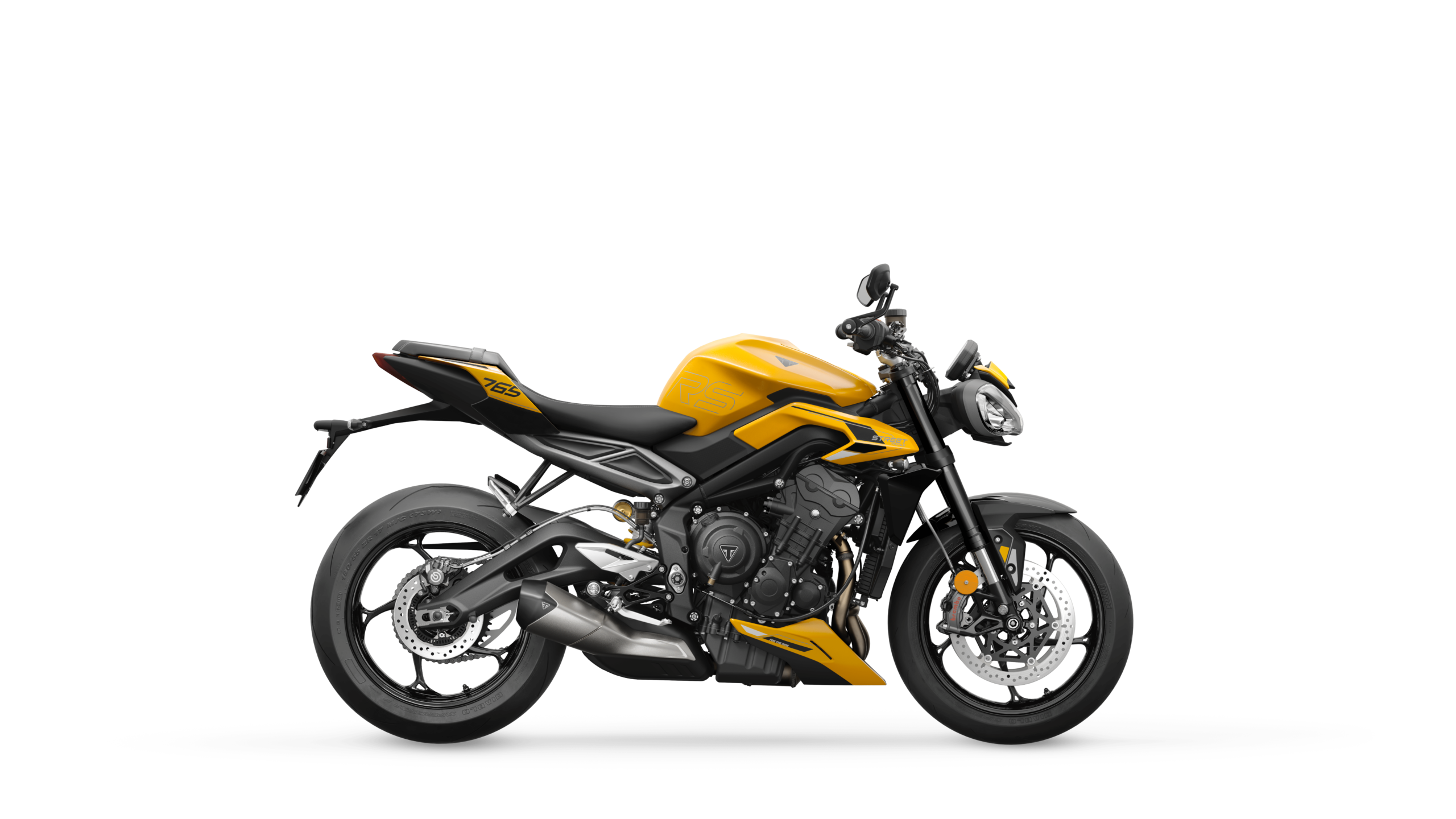 This, combined with its lightweight chassis and incredible power-to-weight ratio, are key to the Street’s class-defining performance. Agile and exhilarating, with Triumph’s signature confidence-inspiring handling make it an accessible choice for all riders.

The 2023 Street Triple range features some great advances in rider-focused technology. With improvements and refinements to the ABS, traction control and riding modes, performance and safety go hand-in-hand with rider comfort and convenience.

The latest generation of optimised cornering ABS comes as standard on all three Street Triple models for 2023, ensuring the optimum braking performance at any lean angle. The system features a new ABS modulator with an integrated IMU (Inertial Measurement Unit) for more refined ABS control. Tailored settings integrated into each of the riding modes alter the level of ABS intervention, while a track-focused tune is also present for riders seeking minimal ABS intervention. 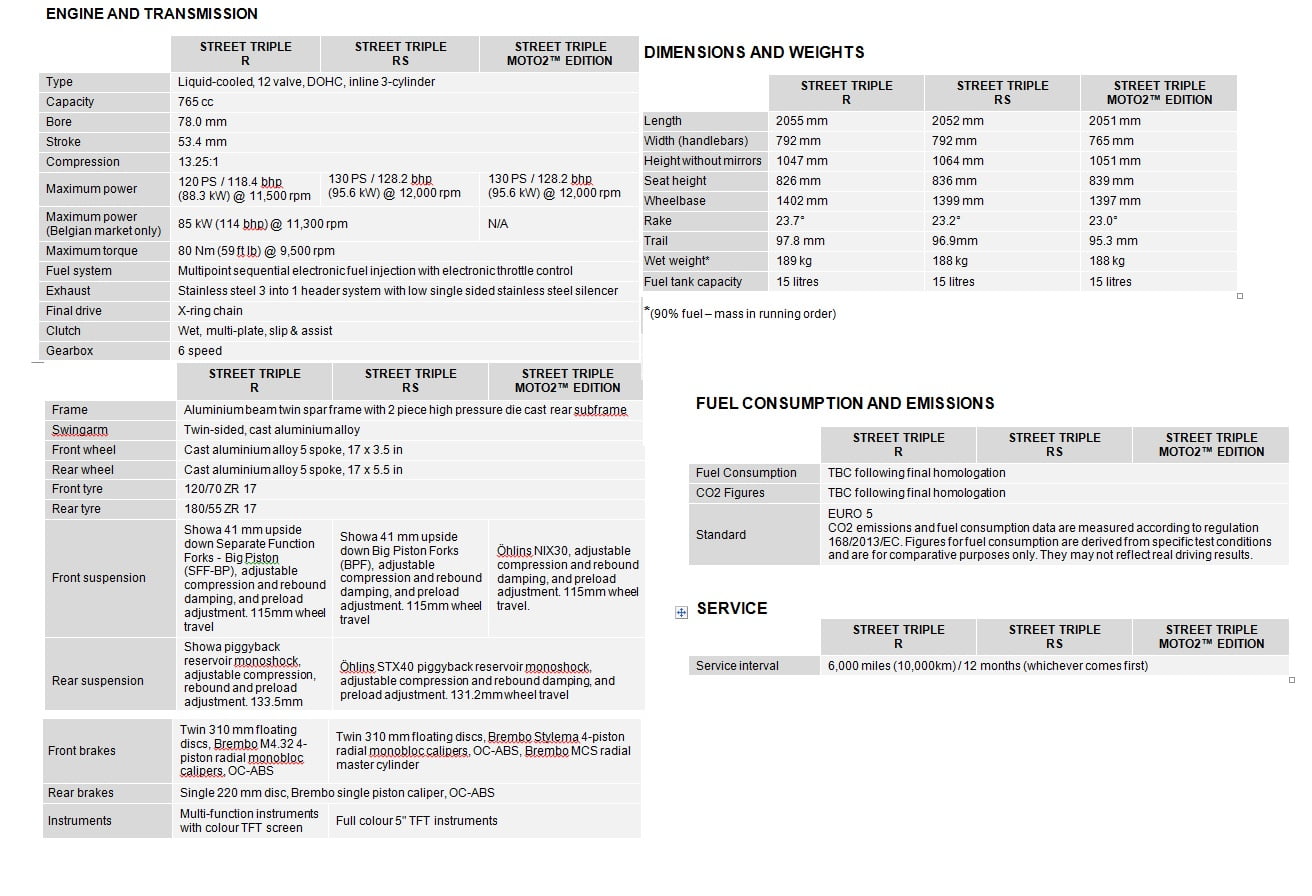 Now standard on all three Street Triple models, optimised cornering traction control supported by an IMU continuously calculates the lean angle to ensure the optimum slip rate and torque control. Four independently adjustable levels of intervention can be selected to suit riding styles and road conditions, including a track-focused tune with minimal intervention as well as the ability to turn it off altogether, for experienced riders in high-grip racetrack situations.

The new Street Triple R features four riding modes: Road, Rain, Sport and Rider-configurable. This makes it easy to fine tune the Street Triple to suit the rider’s preferences. The Street Triple RS and Moto2™ Edition have five riding modes, adding a Track mode to the R’s four standard modes. This track mode has been designed to be as unintrusive as possible whilst still providing the reassurance that the electronic systems are there to help in unexpected situations.

Each riding mode adjusts the character and behaviour of the bike, with new more dynamic throttle maps in Road, Sport and Track modes for an even more responsive feel. Rain mode restricts the engine power to 100PS while increasing the level of ABS and Traction Control intervention for better feel and control in wet conditions.

A lap timer is included on the RS and Moto2™ Edition for track day use, while the Moto2™ Edition also features a unique and distinctive start up sequence that displays the official Moto2™ logo. The Street Triple R comes fitted with its own dedicated easy-to-read multi-functional instrument set-up, which includes a TFT display for key information.

Triumph’s latest track-ready up and down quickshifter is fitted as standard to all three Street Triple models. Ideal for track and fast road riding, upshifts can be made without closing the throttle for a smooth, fast shift that won’t unsettle the bike.

Downshifts can also be made without the use of the clutch and without the need to blip the throttle to match the gear and engine speeds as this process is automatically carried out by the MY23 Street Triple. This feature represents a major riding aid on corner entry, allowing a smooth and controlled deceleration.

Triumph’s slip and assist clutch fitted to all three Street Triple models ensures a light and consistent lever feel for enhanced comfort and control on the road, particularly useful in the stop/start scenario of an urban commute.

The front-wheel lift control is designed to enhance control while feeling barely noticeable to the rider. Advanced new algorithms continuously monitor signals from the IMU to ensure smoother control and faster progress.

Lighting is all-LED across all three models. On the RS and Moto2™ Edition these feature a distinctively shaped DRL (daytime running light) incorporated into the headlights, where market legislation permits. The Street Triple R features a similarly distinctive lighting signature delivered through position lights. Self-cancelling indicators are fitted as standard.

Carefully evolved since its launch in 2007, the striking new aesthetic delivers the unmistakable Street Triple design DNA with the most aggressive attitude and poise yet. With new racing-derived ‘765’ liveries and sporty graphics, this new Street Triple generation redefines the category, setting a new benchmark for the performance naked sports class.

Completely redesigned for 2022, the Street Triple’s sharper and more focused style is the result of attention to a great number of details. The new 15-litre fuel tank has integrated side panels with an angular design that aligns beautifully with the sharper radiator cowls, further complemented by a new headlight finisher that also incorporates the air intake. Additionally, there’s a new colour-coded belly pan for the RS — which is available as an accessory option for the R.

The rear end of the new Street Triple is no less exceptional, with a sporty, upswept design to give a focused, nose-down attitude. The RS features a colour-coded seat cowl with an interchangeable pillion seat – making switching between different configurations easy.

The new silencer shape adds to the Street Triple’s aggressive stance as well as accentuating the hair-raising Triumph triple soundtrack.
As the ultimate, race-inspired Street Triple, the Moto2™ Edition features lightweight carbon fibre bodywork including the front mudguard, side panels, headlight finisher and belly pan. Adding yet more exclusivity and desirability, each of these limited-edition motorcycles has an exquisitely machined top yoke with its number etched onto it. Just 765 of each colour scheme will be made, making this the most exclusive, and collectable, Street Triple to date. 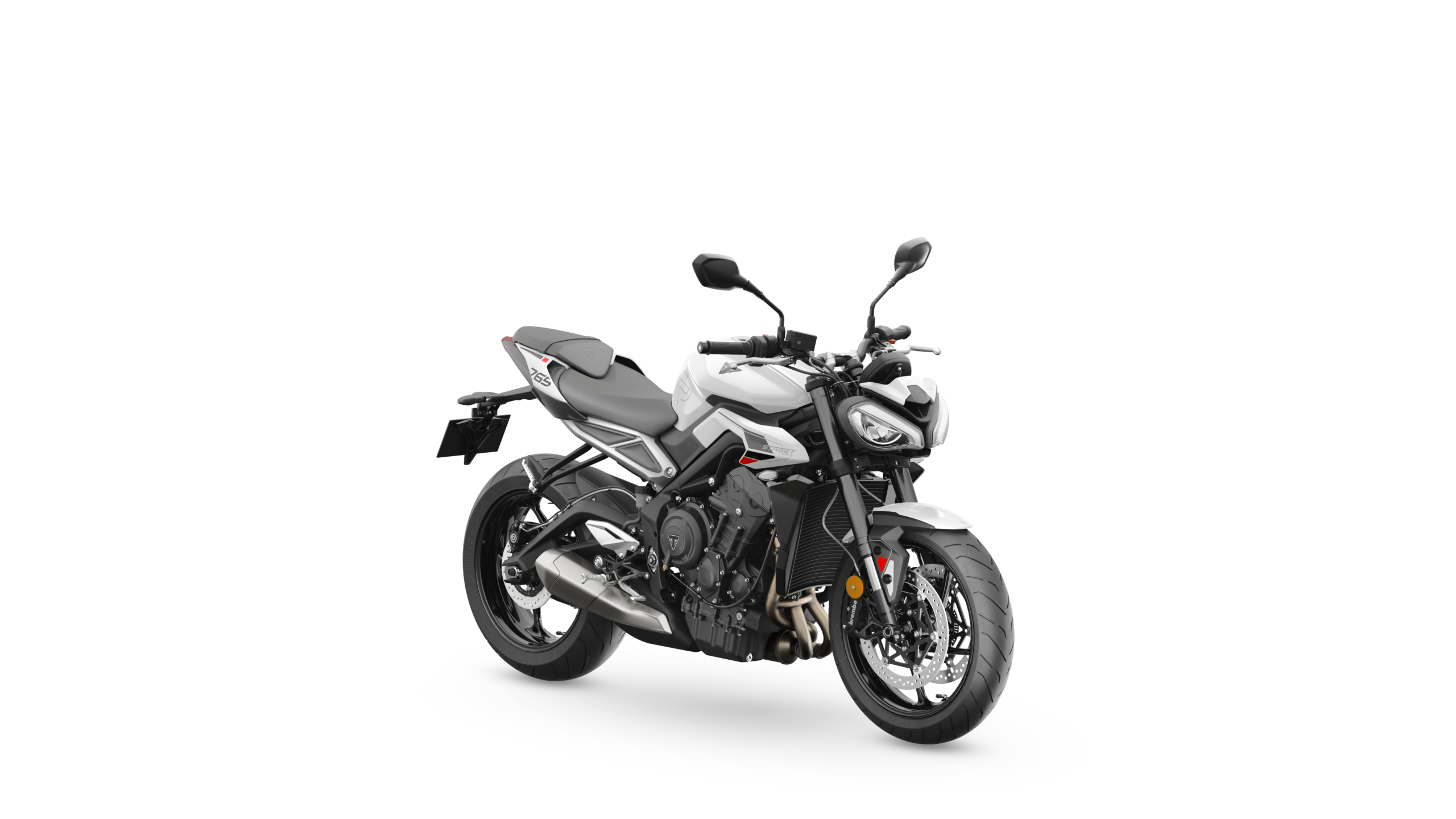