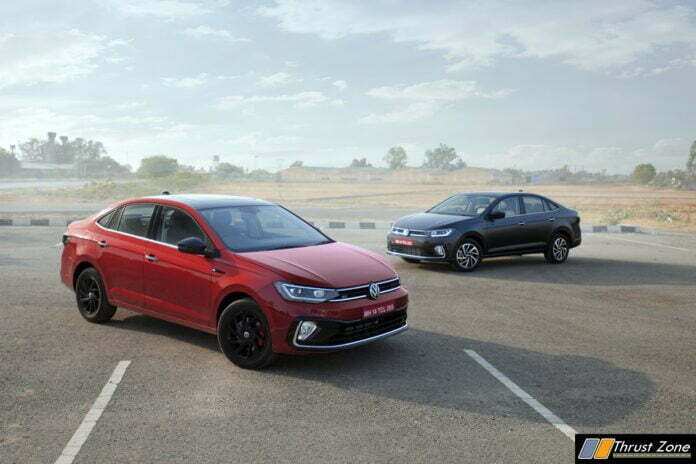 All the talk on sedans coming back is responsible thanks to the Volkswagen Virtus and Skoda Slavia stepping in the segment. The sedan is not back in its true-blue form as it was earlier, but it is still here. Volkswagen and Skoda’s officials said that this is what they do best and hence getting a better car out of this platform is using the sedan body style. Needless to say, SUV fans were happy with the twins VW group launched last year and this year it was all about the Virtus and Slavia. The Virtus is here with us after driving all three variants. How is it. Clearly, we are impressed. By how much? Read on! 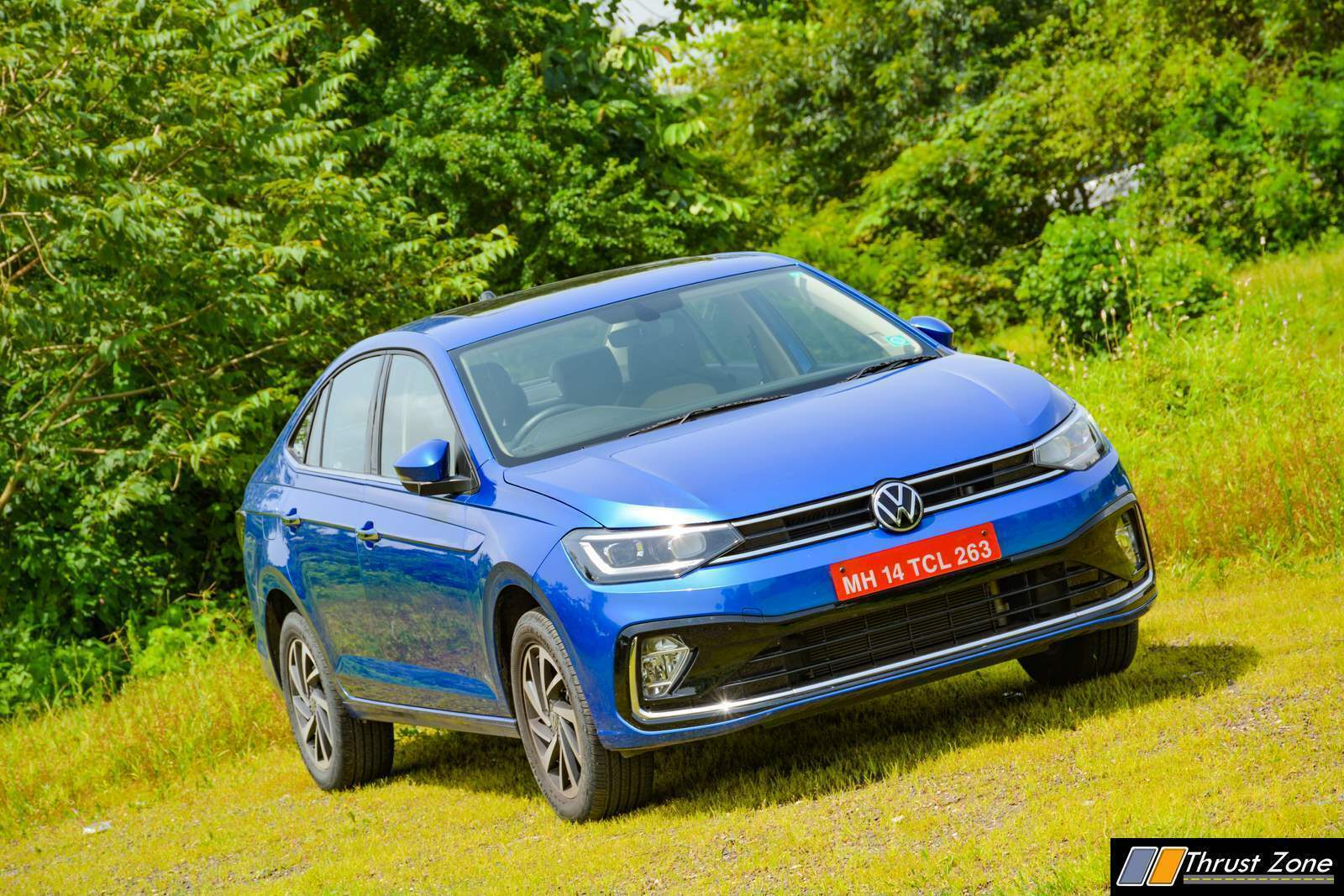 On the outside, the subtle chrome grille grabs attention and the substantial bumper size makes it look sporty with gloss black inserts. The LED DRL at the front and very fancy-looking LED tail lamps make it look futuristic. Just like SUV twins, the saloon twins’ competition of better design goes to VW, which looks better than its sedan twin too. This also makes the car look like a typical VW saloon that we are seeing worldwide. 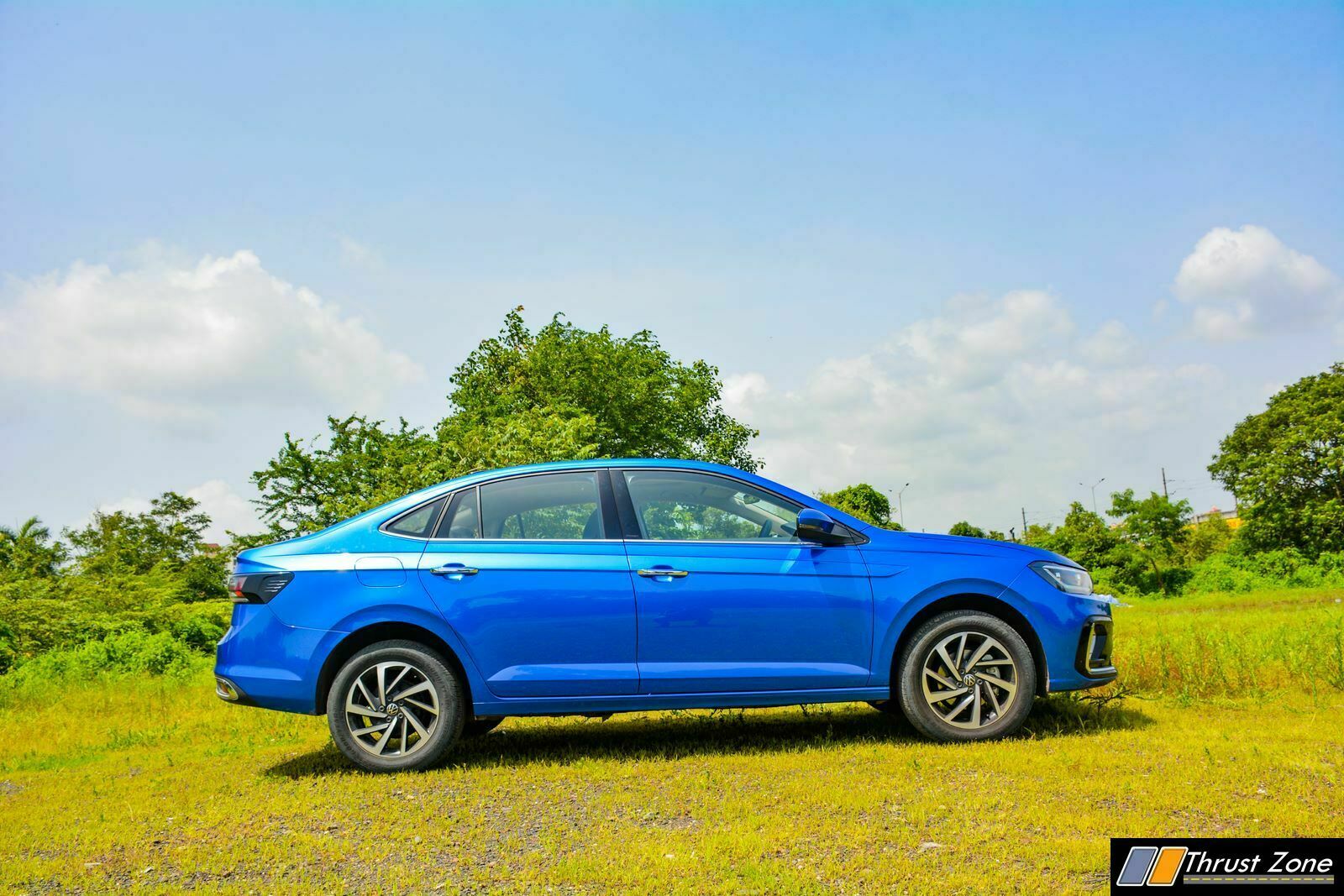 The side profile is of a proper European Sedan as it looks clean, stylish, and subtle at the same time. A very strong resemblance to the current and previous Jetta on sale makes it an instant hit in the enthusiast community. The build quality on the outside seems and sounds great and it should score high on the crash test as well The elements on the car, such as the front end, LED tail-lights, a large wheelbase, multi-spoke diamond-cut and regular wheels on any variant make it look much better than its rival and its cousin, the Skoda Slavia too. Only if it was lower, it would be the ideal car from the showroom itself. 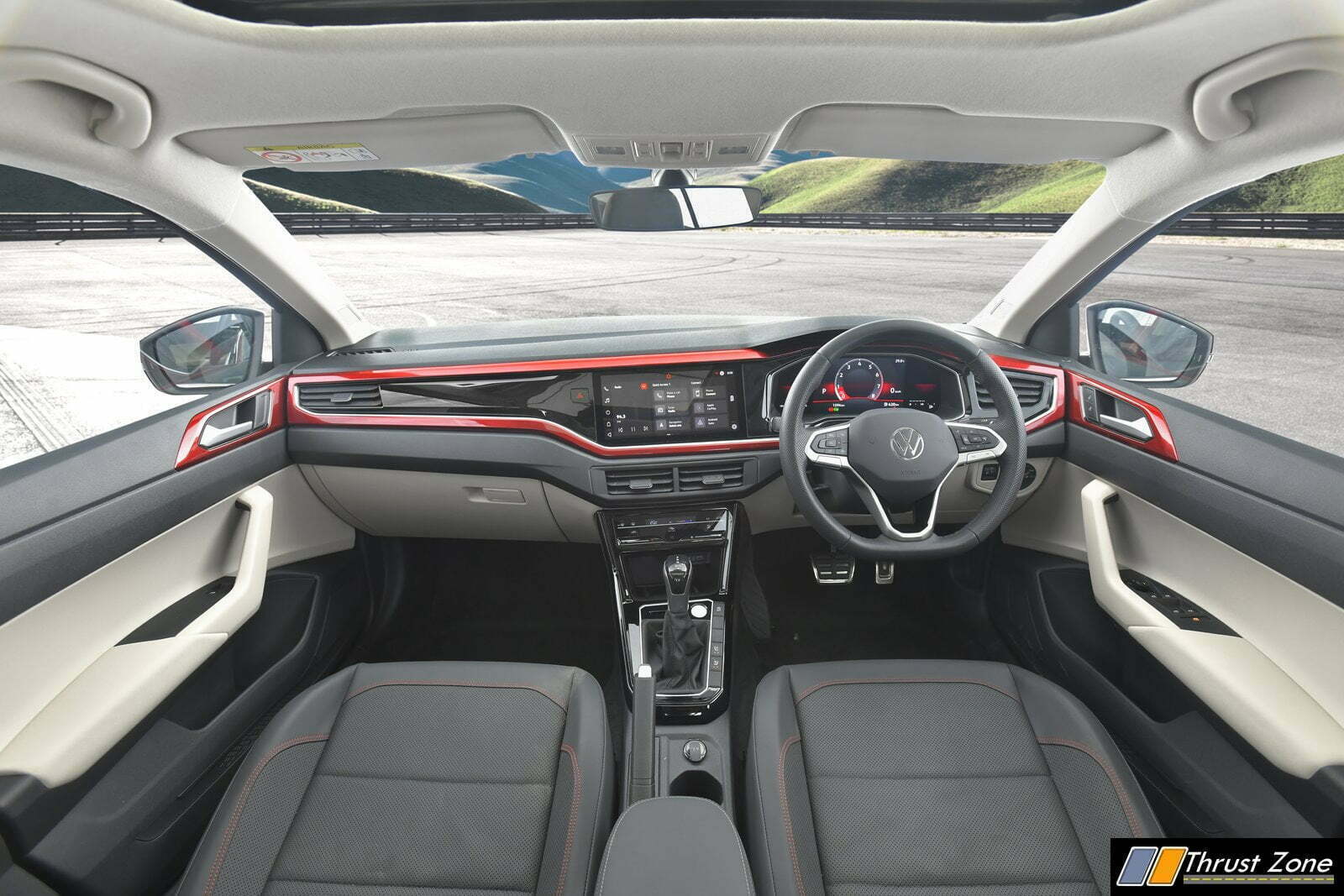 On the inside, the build and quality are good and so is the expansive feature list we have explained time and again in our launch report. You get every feature possible in the saloon. Right from automatic lights and wipers to reversing cameras, single ambient light, projector lamps and more. The car is devoid of a large panoramic sunroof, power seats, front parking sensors, and a digital cockpit for now. However, it gets Wireless Apple Car Play and Android Auto that work flawlessly along with a normal sunroof. 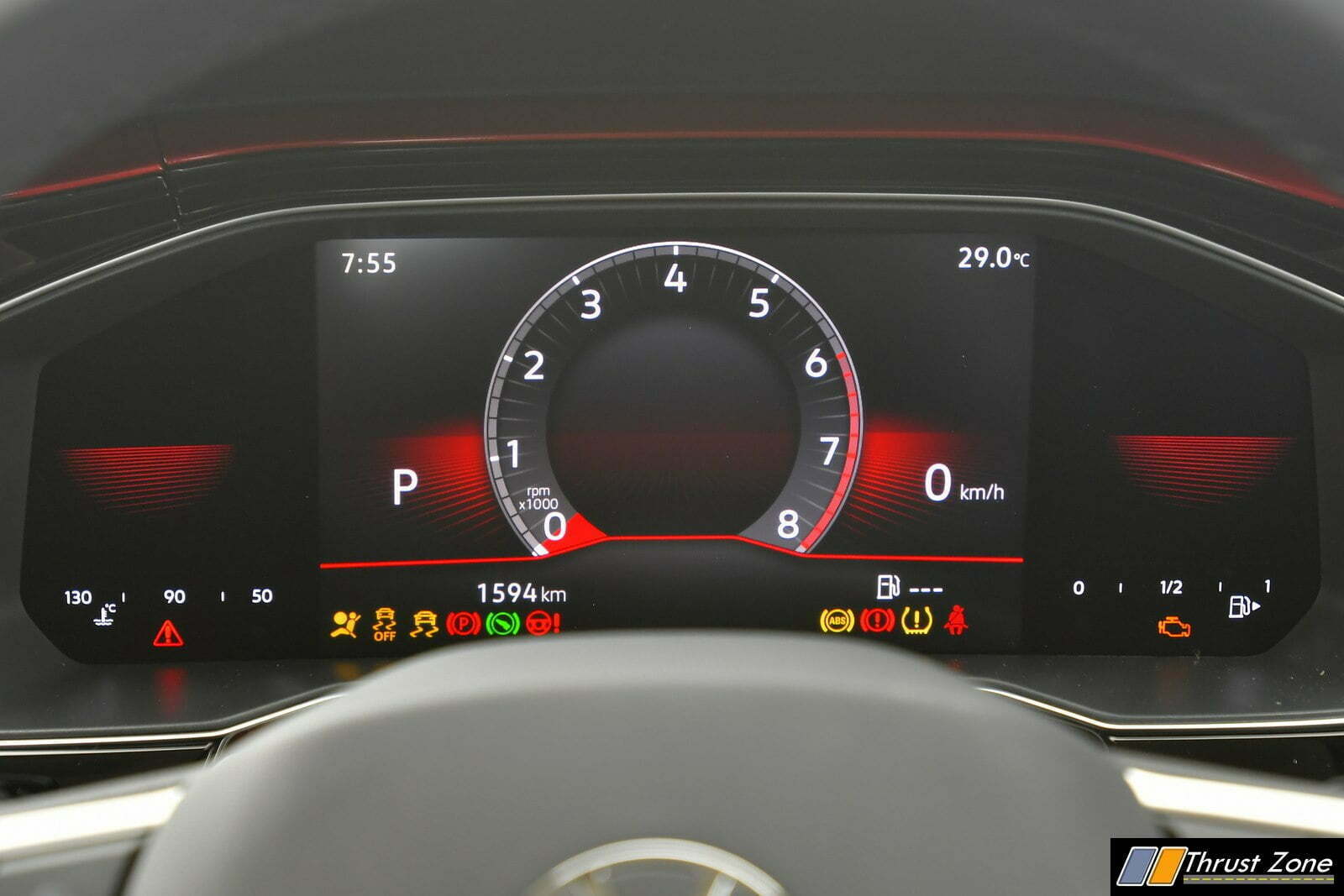 The digital instrument cluster area has all fuel economy indicators and other bits can be seen with a touch of the toggle button on the right side of the steering. A fantastic sound system by VW themselves is on offer makes the experience top-class. The main screen is slick, quick and works quite well. There are some bugs with Android phones when it comes to playing music on our test car which was seen on the SUV’s is seen here as well. VW Connect system includes a host of GPS-related features such as GEO and time fencing and much more. We like the illumination and spread from the headlamps as they were more than required. The fog lamps are halogen but LED lights and DRL add to the aesthetic appeal as well. 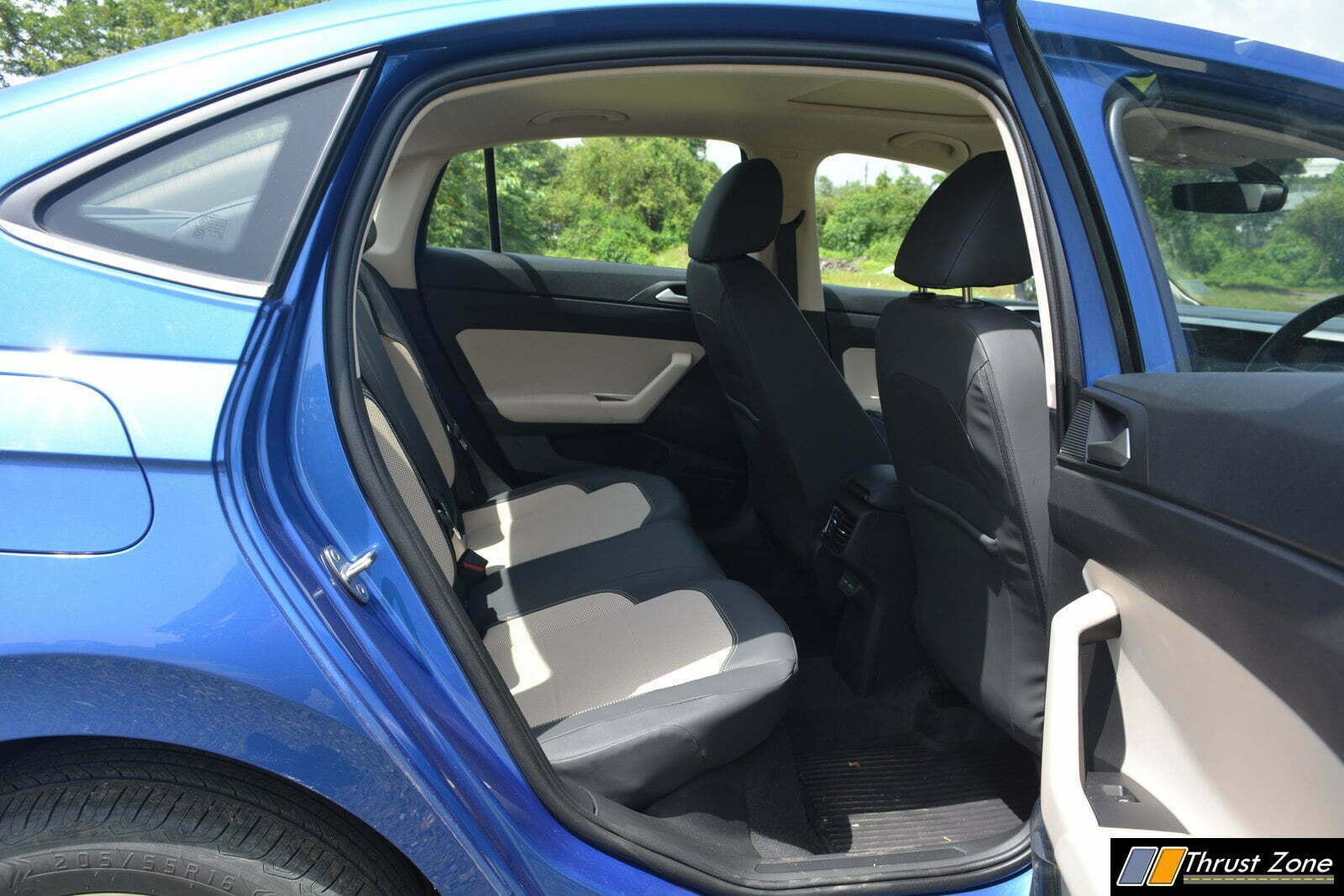 Space is more than most of its rivals with adequate shoulder room, but the knee room you expect is here in a very good margin. Leg and headroom continue to be in good supply but as always it is more of a four-seater than a five-seater. The boot space is good enough at 550 litres and so is the overall practicality of the interior. Road and wind noise inside the cabin is also well-controlled thanks to good insulation all around. Like any other VW, it is still a pleasant place to be thanks to things like Aircare with multi-level filtration. Safety kit continues to be high with the inclusion of active safety features such as electronic stability control and six airbags on the top-end variant, Hill Hold Assist, ABS and EBD, and more come as standard. The passive safety feature list is far larger on the sedan like the SUV’s.

Volkswagen TSi engines are smooth, free-revving, and low on NVH and the one on the Virtus. Be it in any part of the rev range. Low and mid-range are good on the 1.5 turbocharged petrol motor that makes a 150 PS and 250 Nm of torque going through the fantastic, smooth, seamless, and quick-shifting 7-speed DSG automatic. The engine is linear flexible and powerful at the same time. The 1.5 is a bit crude at higher RPMs as vibrations and sound can creep in the cabin but that is only apparent at higher end of the rev range. Speaking of driving quickly, the DSG does lack the urgency when launched over the, let’s say, 1.0 TSi equipped with a 6-speed torque converter only from standstill. 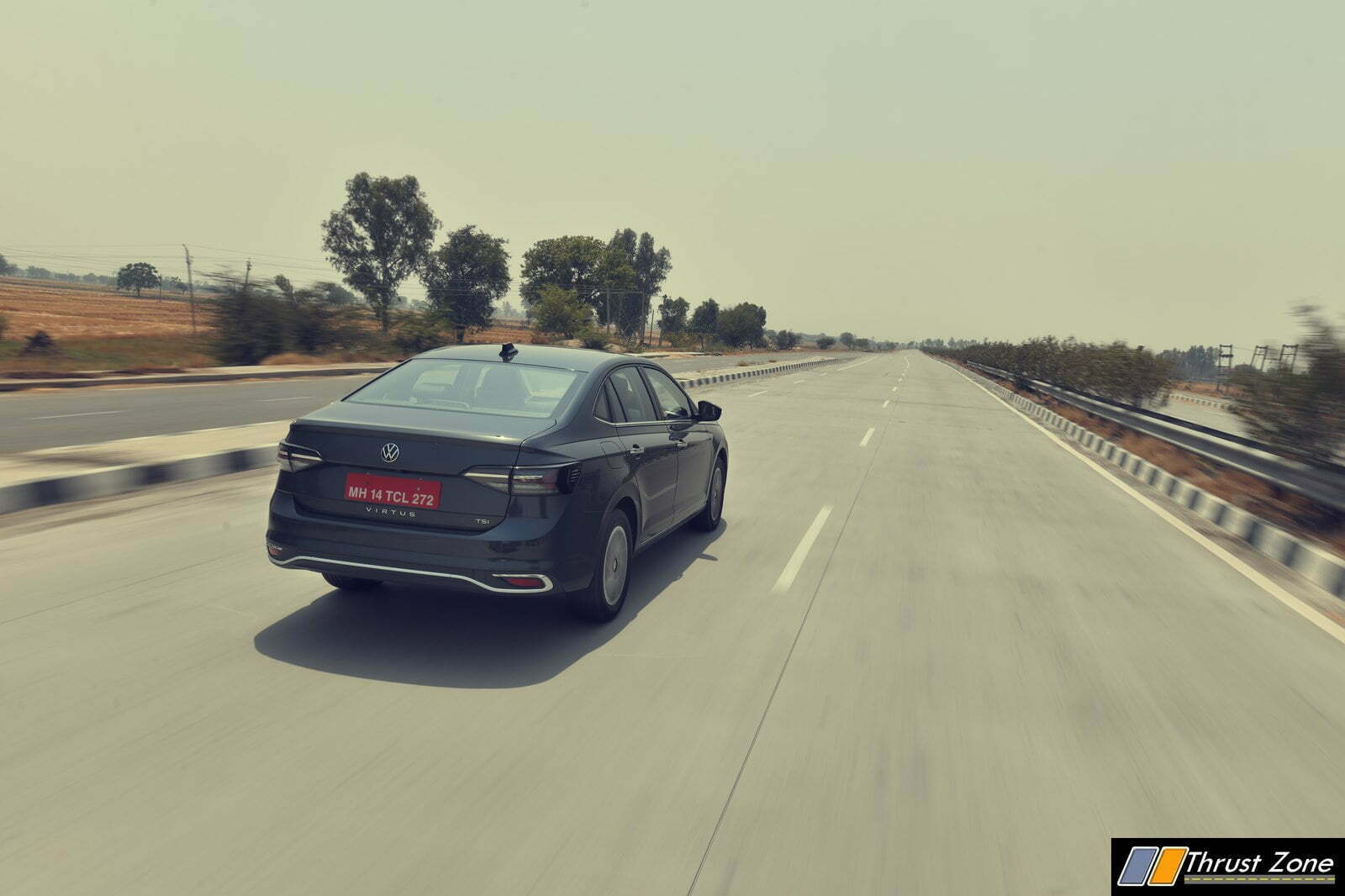 1.5 delivers spectacular fuel economy of 16 km/l in the highway run. Dealing with traffic in cities and a slightly spirited highway run too. All thanks to 7 speeds and cylinder deactivation. The manual gearbox is not offered yet with the 1.5 TSi. The 1.5 TSi is for the enthusiast with ‘no compromise’ on their mind. The seriously quick acceleration and speed blows you away. It can feel raw and unrefined at the very limit but most of the time it is a spectacular all-rounder. It can be the car that can do highway runs to other cities and states and everyday city runner with DSG and manual, both. 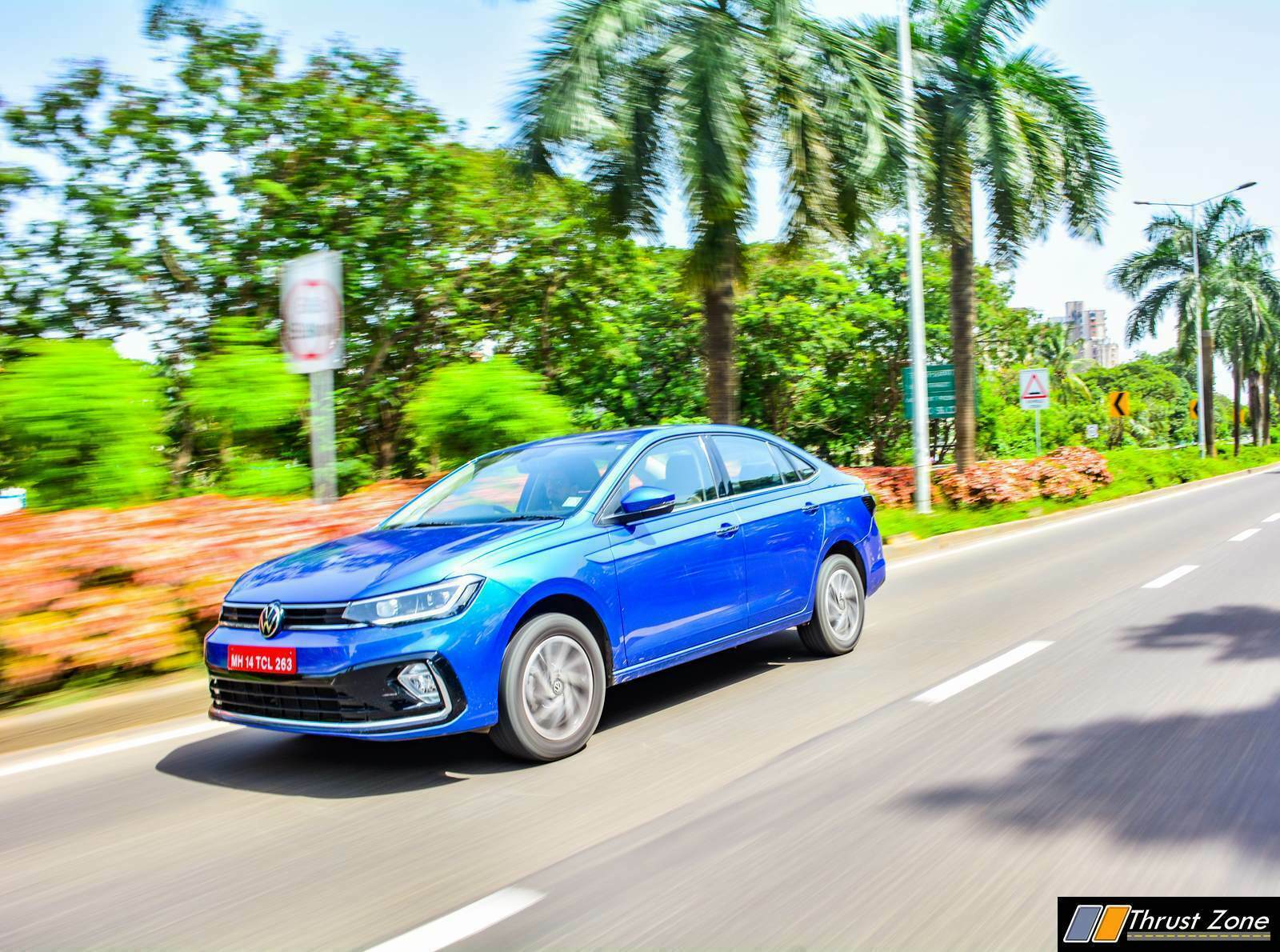 The 1.0-litre TSi 3-cylinder unit makes 115 PS and 175 Nm of torque and also has a fast and smooth shifting gearbox. However, the shifts are not entirely seamless, which feels exciting for enthusiasts but everyday joes may not appreciate if they digger deeper in this part. There is also a bit of turbo lag between 1400-1700 RPM but below and above that it moves very swiftly. 1.0 litre also delivered 12 km/l in the city and 17 km/l on the highway in our testing. The manual gearbox is easy to use, smooth and light. The 3-cylinder is roaring with its lumpy power delivery while the 1.5 TSi screams smoothly while being more refined than the aforementioned. The Clutch is a light, has long travel, and has a typical bite point just like another VW group of cars on the 1.0 litre. 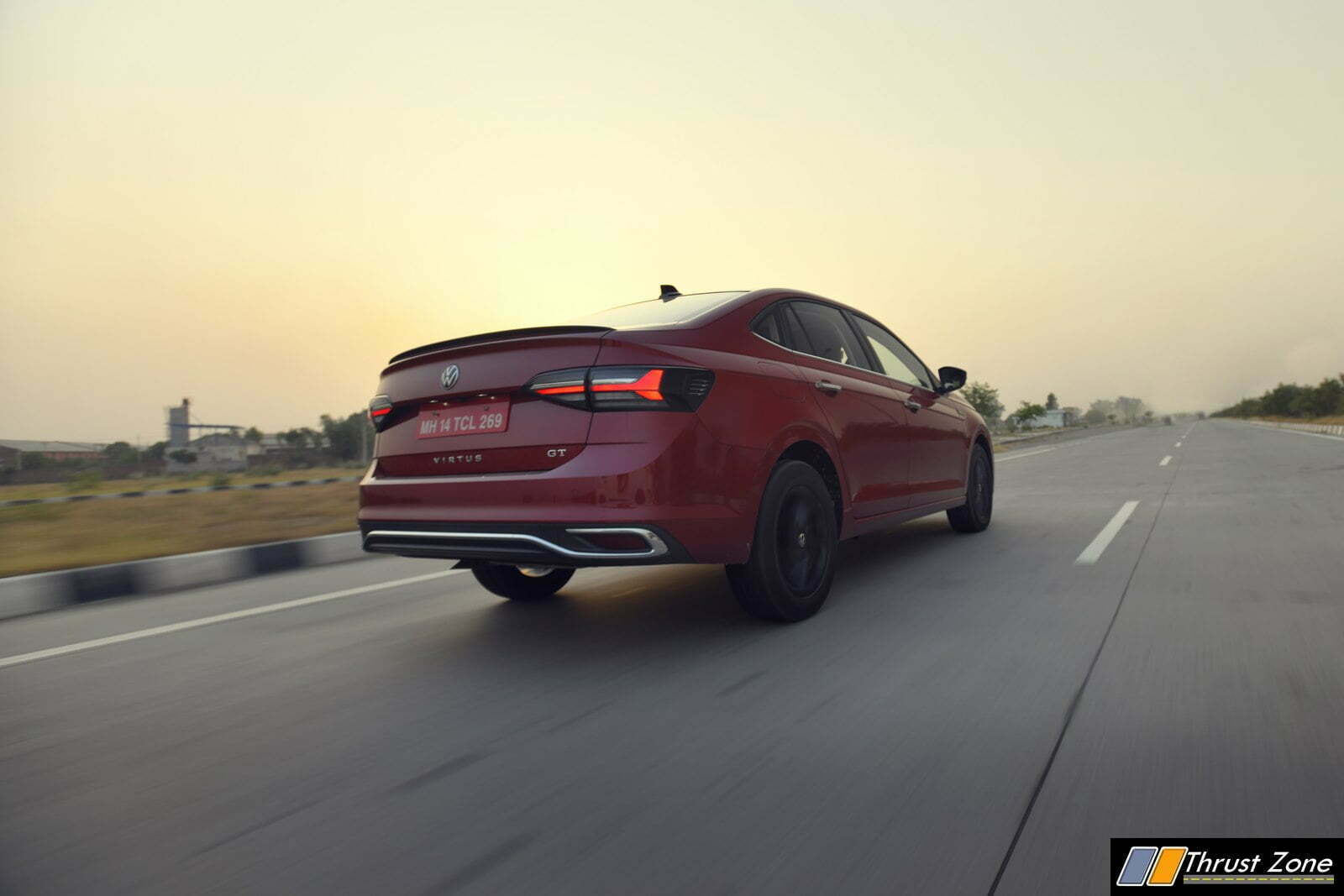 The ride quality is more reassuring at all speeds than we expected. The raised suspension gives it good agility too! The steering gives little feedback and is very precise at all speeds. It weighs up well on the highway too. High-speed stability is spot on thanks to the ideal balance of underlying stiffness and compliance. The brakes were good too with great pedal bite and a lot of performance on offer. Body roll exists while changing lanes at high speeds but it is still a very confidence-inspiring car to drive at any given speed. Overall, a very easy-to-drive sedan and the same time the most fun-to-drive car in its class. 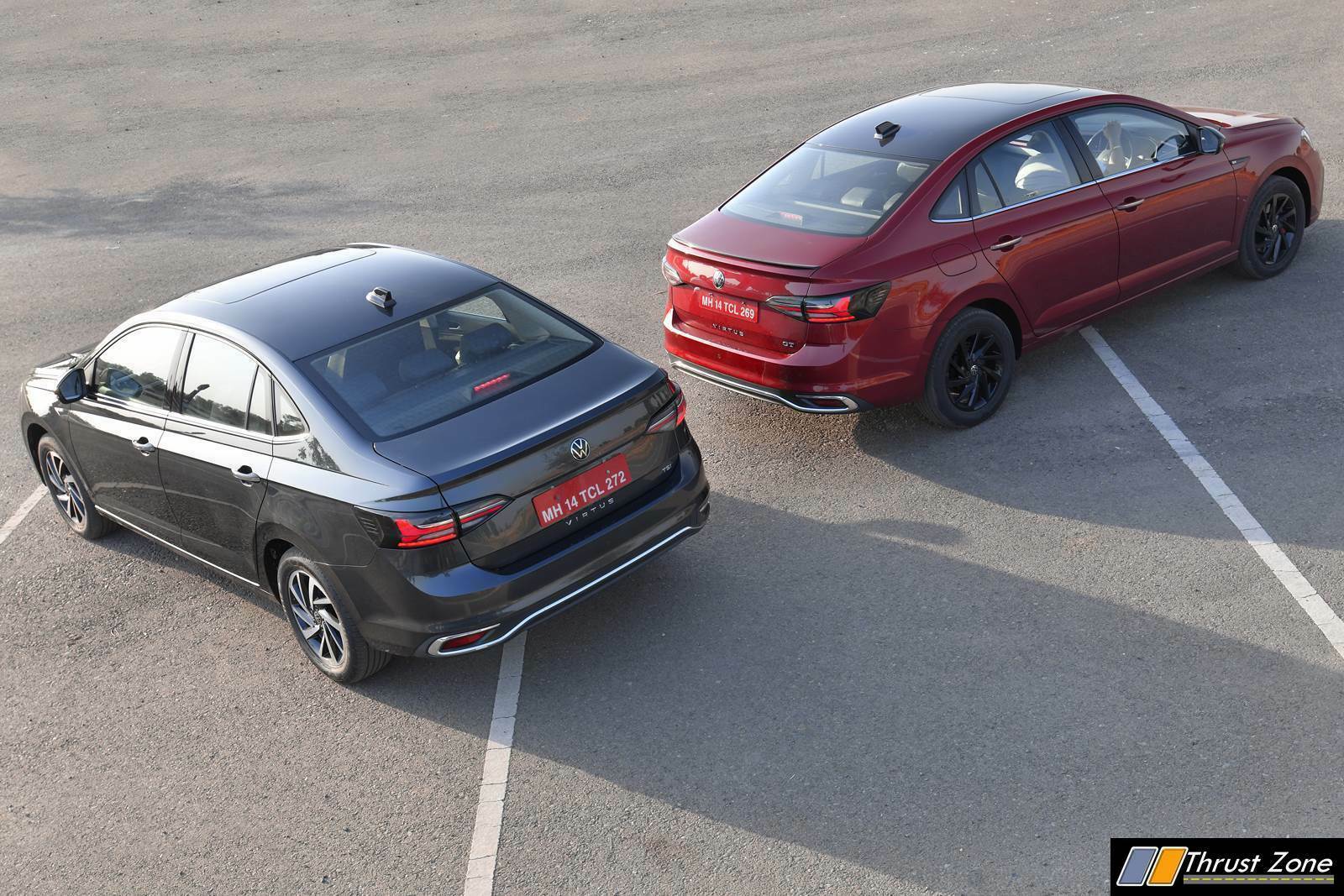 As we said before, we are impressed with the Virtus in the way it looks, and drives, the interior design is our favourite and there are things we don’t like. The quality and finish could be a tad bit better as it meets the benchmarks but quite clearly, it does not surpass what we expected from VW. The Virtus is priced sensibly enough and dives directly into the Honda City territory. Both manufacturers are known for great sedans, but the City’s history in India is spotless with an excellent reputation. If Volkswagen can slightly up the game, 20 years later, we will not regret recommending anyone a Virtus as we do right now without a second thought as it has the firepower and frugal engineering to impress.