All You Need To Know: Ducati Superleggera V4 – 001 Unit Delivered! 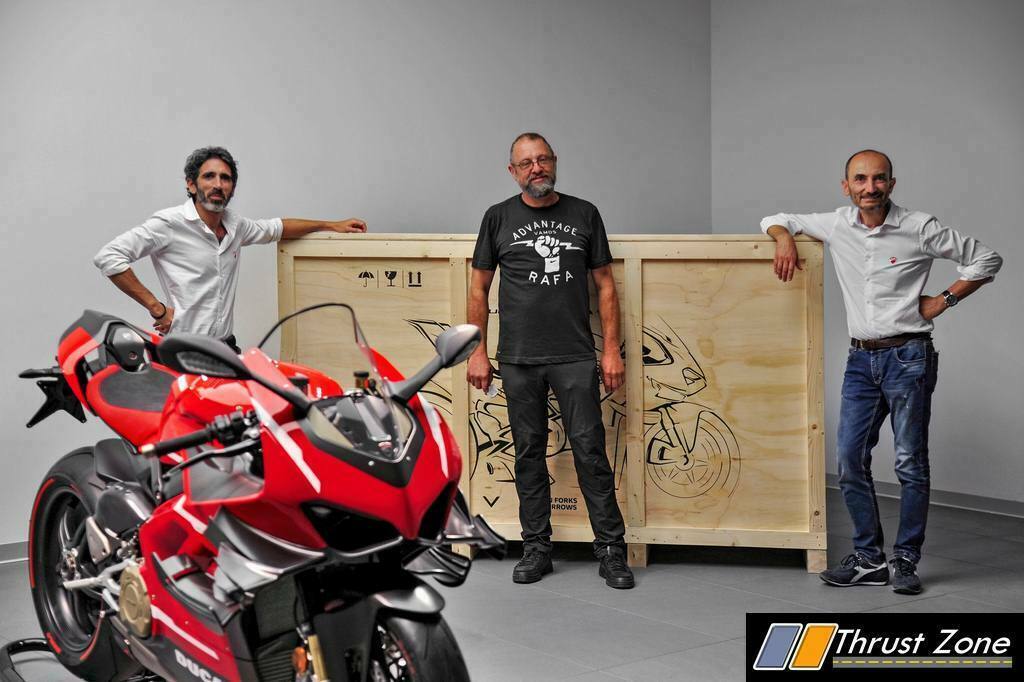 The number 001/500 model of the Ducati Superleggera V4 – the only motorcycle in the world homologated for road use with carbon fibre frame, swingarm and rims and produced by the Italian motorcycle manufacturer in a limited run of just 500 units – has been officially delivered to its new owner, the Belgian Ducatista Filip Van Schil, who already possesses nine other Ducati bikes.

For the occasion Ducati invited Van Schil to the Borgo Panigale factory for a special tour, in which he was able to see up close the line where his motorbike was built and meet the specialized worker who made its engine. The day then continued with a visit to the company Museum, the Centro Stile Ducati and the Racing Department. In addition, as with all the other Superleggera V4 owners, Filip will have an incredible opportunity to test the Panigale V4 R, which competes in the SBK World Championship, on the track at Mugello as part of the “Superbike Experience”. It was Claudio Domenicali, CEO of Ducati Motor Holding, who unveiled the Superleggera V4 001, and then handed it over to its new owner. The ceremony took place inside the Centro Stile Ducati.

The attention that Ducati wished to reserve for the Ducatista does not stop with an invitation to the company and the delivery of a copy of the book Stile Ducati bearing the date of this unforgettable day and a special dedication from Claudio Domenicali. As will all those who have bought or will buy a Superleggera V4, Van Schil also received a sculptural reproduction of the Superleggera V4 personalized with the number of the bike it accompanies. The Superleggera V4 will be delivered to owners accompanied by a certificate of authenticity and inside a wooden crate with dedicated graphics, specially created for the transport of this masterpiece of motor engineering. 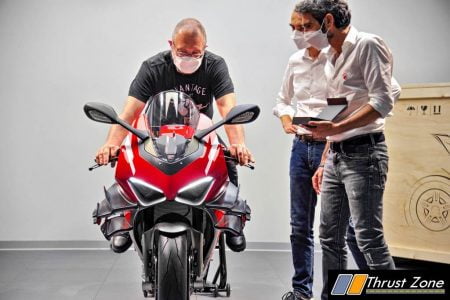 The package that Ducati has provided for this unique project includes, in addition to what has already been mentioned, a racing kit, the possibility of customizing the Superleggera V4 leathers with air-bag and part of the “SuMisura Ducati” line and the opportunity to complete the look with a carbon helmet. Even more incredible and exclusive is the opportunity, limited to only 30 owners of the Superleggera V4, to purchase access to the “MotoGP Experience”. For the first time, in fact, it will be possible to ride the Desmosedici GP on the circuit, followed directly by Ducati Corse technicians, making a dream come true for all fans of sports bikes and the red bikes of Borgo Panigale.

Superleggera V4
The Superleggera V4 is the only motorcycle in the world, approved for road use, with the entire load-bearing structure of the chassis (frame, subframe, swingarm and rims), made of composite material, obtaining, for these components only, a weight saving of 6.7 kg compared to those of the Panigale V4 MY20. To ensure the highest quality and safety standards, these components are 100% controlled by the most sophisticated techniques borrowed from the aerospace industry, such as thermography, ultrasound checks, and tomography. The specific set-up of the chassis gives an unparalleled deceleration capacity, an extraordinary speed of descent when cornering and a marked tendency of the bike to close the trajectories when exiting corners. 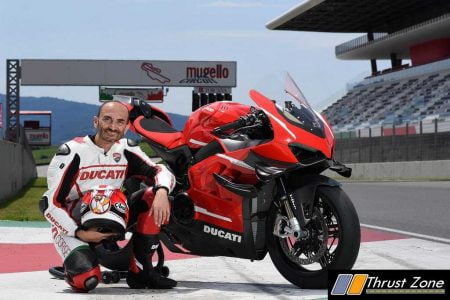 Many components are made of carbon fibre, modelled in advanced aerodynamic shapes. These include the fairing, which reaches efficiency levels higher than those of today’s MotoGP bikes, which are limited in this by the current technical regulations. Thanks to the aerodynamic biplane appendages inspired by Ducati’s 2016 MotoGP bike, the most highly-performing in this field, it is able to guarantee a vertical load of 50 kg of “downforce” at 270 km/h, 20 kg more than that produced by the wings of the Panigale V4 MY20 and V4R. This downforce improves acceleration by counteracting the tendency to wheelie and increases braking stability.

The carbon fairings are embellished with a livery inspired by the Desmosedici GP19, with an alternation of lines and depths between the red colour of the GP19 and the visible carbon that highlight the shapes, the materials and the technical details. The red continues on the coloured sides of the OEM Pirelli Diablo Supercorsa SP tyres, specifically developed in the construction for the Superleggera V4.

The most powerful and lightest Desmosedici Stradale R engine is hidden under the carbon skin. The 998 cc 90° V4 unit of the Superleggera V4 weighs 2.8 kg less than the 1,103 cc V4 and, thanks to the Akrapovič approved exhaust, produces 224 hp of power in road configuration (EU homologation value), which becomes 234 hp by mounting the titanium Akrapovič exhaust for track use, which is included in the Racing Kit supplied with the bike. The racing connotation of the engine is emphasized by the use of a dry clutch and by the timing of the Desmodromic system made manually by a specialist who, after checking, confirms the positive result by affixing his signature on the metal plate that embellishes the carbon cover of the rear cylinder bank.

Only on the Superleggera V4, by loading the engine calibration for the racing exhaust, is it possible to enable the display of the “RaceGP” dashboard. Intended for circuit use only, it derives from that of the Desmosedici GP20 dashboard designed on the indications of Andrea Dovizioso. 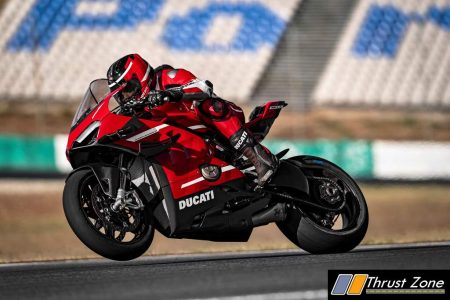 Thanks to the extensive use of carbon fibre, components made of titanium, magnesium and others from aluminium billet, the Superleggera V4 shows a dry weight of 159 kg on the scale (16 kg less than the Panigale V4), for a power/weight ratio of 1.41 hp/kg. A record value for a homologated sports bike. In track configuration, by mounting the Racing kit supplied with the bike, the power rises to 234 hp and the weight drops to 152.2 kg, with a power/weight ratio of 1.54 hp/kg.

The electronic controls have also been evolved in a purely racing perspective. By default, the operating parameters of these are associated with three reprogrammed Riding Modes with specific names (Race A, Race B and Sport). In addition, for the first time five Riding Modes can be added, customizable with your favourite settings. The rider can monitor lap times through the evolution of the Lap Timer, which now allows you to store the coordinates of the finish line and the split times of five favourite circuits, so as to recall them every time you go out on the track without having to repeat the data logging procedure. By default the system proposes the coordinates of the finish line and intermediates of Laguna Seca, Mugello, Jerez, Sepang and Losail. Added to this is a latest-generation electronic package that includes EVO 2 strategies for DTC and DQS up/down.

Öhlins lightened suspensions with pressurized fork and lightened billet foot and shock absorber with titanium spring and GP-derived valves are part of the equipment, which improve the absorption of road roughness in the initial compression phase. 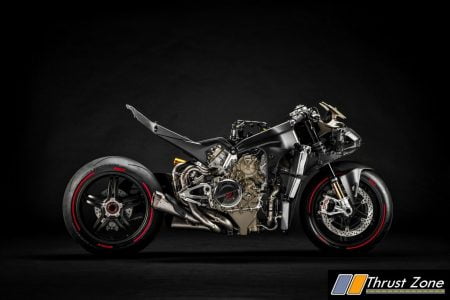 The braking system is the best of Brembo production with an MCS radial pump equipped with a remote control for adjusting the distance of the lever and Stylema® R calipers, an exclusive of the Superleggera V4 that allows greater consistency of front brake travel in long runs on the track.

All this translates into a level of performance of absolute importance. Alessandro Valia, official Ducati tester, with Racing Kit and slick tyres, lapped the Mugello circuit in 1m52.45s, less than two seconds away from the time of the Panigale V4R SBK winner with Michele Pirro in CIV 2019. An example of maximum attention to detail is the aluminium radiator cap machined from billet and the dedicated ignition key with aluminium insert on which the motorcycle number is indicated.

Ducati Superleggera V4 is an extreme machine, devised and designed to achieve maximum performance on the circuit, but at the same time guaranteeing the reliability and ease of use requirements typical of a sports motorcycle homologated for road use. With this motorcycle Ducati pushes the limit even further. The technical competence and knowledge developed and continuously evolved in MotoGP is made available to fans of technique and performance on two wheels.