Audi aims to sell approximately 800,000 fully electric cars and plug-in hybrids in the year 2025. Audi Electric Car Sales enable about every third customer to decide in favor of an e-model by the middle of the next decade, there is to be an electrified variant in each model series by then – most of them are to be fully electric, with a smaller proportion as plug-in hybrids.

In order to release resources for the package of investments amounting to billions of euros, Audi adopted its Action and Transformation Plan towards the end of last year. It has the objectives of tapping into new revenue sources, improving cost structures and accelerating the corporate transformation with regard to new business models. That will considerably increase the scope for investment. By 2025, approximately €40 billion is to flow into strategic areas such as e-mobility, autonomous driving and digitization. This also applies to the digitization of production.

The production version of the Audi e-tron prototype is the first result of the Roadmap E initiative, with which the premium brand will electrify its complete portfolio by 2025. This also includes investment in the German plants in Ingolstadt and Neckarsulm as well as a clear commitment for job security until the end of 2025.

The product fireworks include more than 20 electrified models in rapid succession until 2025. In 2019, the Audi e-tron Sportback will be the second fully electric car to be launched, followed by the Audi e-tron GT from Audi Sport in 2020. Audi will also offer an electric model in the premium compact segment in 2020.

For its Roadmap E, the company is making systematic use of two major Volkswagen Group synergy levers in the area of development. In addition to the Modular Electric Toolkit developed by Volkswagen for the compact segment, Audi and Porsche are working together to implement the premium-architecture electrification for mid-range, full-size and luxury-class electric cars. These cooperation projects reduce development costs substantially. For the customer, it means a quickly available choice from a broad portfolio for emission-free driving. 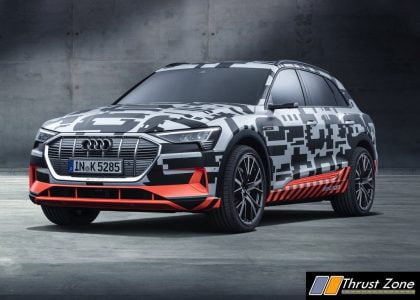 With electric mobility, Audi takes a holistic, resource-conserving approach also to production: In Brussels, the Audi e-tron is the first premium car to be produced in certified CO2-neutral high-volume production. Following Brussels’ example, Audi will make all its production sites worldwide CO2 neutral by 2030.

At the market launch of the e-tron, customers in Europe will benefit from a high-performance charging infrastructure. Audi is making a significant contribution to the development of that infrastructure through the Ionity joint venture. The production version of the Audi e-tron will be the first car that can be charged at rapid-charging stations with up to 150 kilowatts. This will make the electric SUV ready for the next long distance in just under 30 minutes. Its lithium-ion battery provides a range of more than 400 kilometers in the WLTP driving cycle.

For the first time, the production version of the e-tron prototype offers Audi customers the possibility to flexibly book functions such as driver assistance systems or infotainment features also after the vehicle is bought. More digital content and services will gradually be made available to the passengers. Audi aims to generate operating profit of €1 billion with such new business models by 2025.

Rolls Royce Cullinan Is An SUV