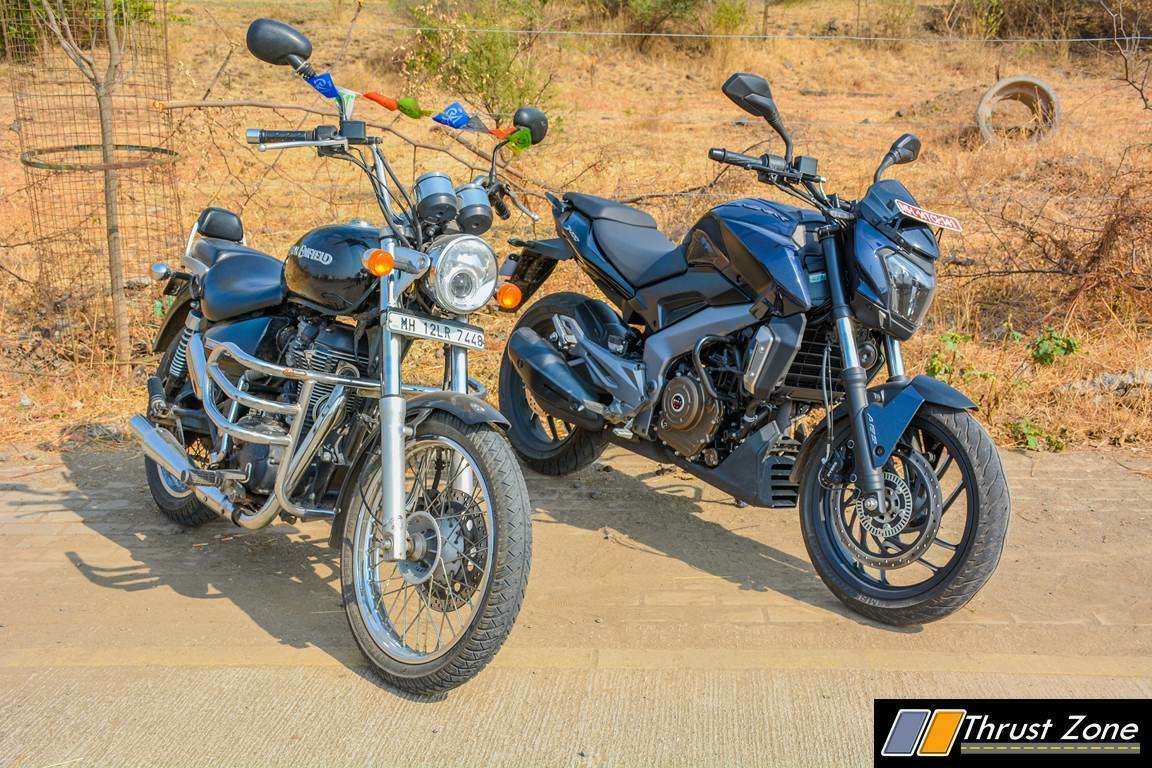 Let’s say you are in the cruiser market for a vehicle which cost under the Rs. two lakh mark. You need a motorcycle that can do it all. Get groceries from the market, go to office, go out on the weekend, planning a trip to the local mountains and then the big bad mountain in the north of the country. If this was your requirement, you bought the biggest Royal Enfield you could after realizing that the American manufacturer is offering nothing more for double the price that you really want. This is where the market dynamics changed because there is a new kid on the block.

Bajaj aims at RE with the new Dominar motorcycle. The Dominar is almost a 400cc motorcycle that has cruiser role built into it. Right from specifications to ergonomics and tends to offer comfort along with performance with modern day technology. Thunderbird 350 is what you listed down as it was the most youthful of the lot and the most modern Royal Enfield till date. So let’s say we got into your mind and got the idea and compared them for you. Which is best? We rode them back to back for a day to tell you what it is like. 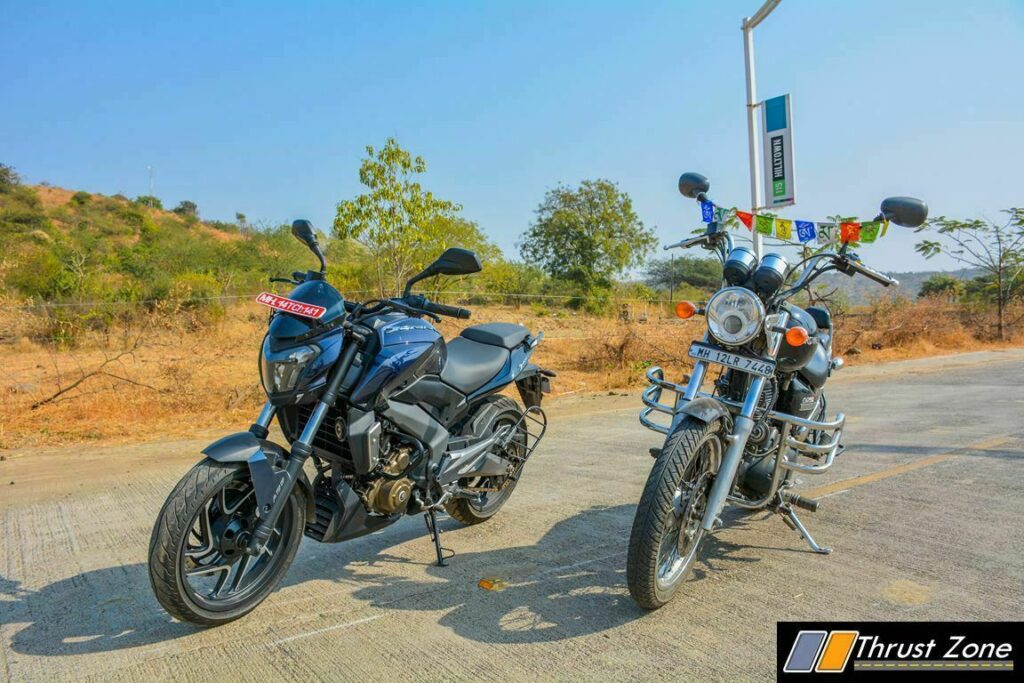 When it comes to design, the Royal Enfield was updated in the year 2012 while the Dominar is all new for 2017. Dominar was first seen at the 2014 Auto Expo as a concept known as the Pulsar CS400. Royal Enfield has a lot of chrome running around while the Dominar has a chassis, engine and suspension shouting loud that what it is in different colors. Both motorcycle have extremely large and muscular fuel tanks. Dominar has been chiseled to perfection, the Royal Enfield tank looks like it has beefed up again and again not to impress the new millennial, but a different set of customer.

While Dominar is wide and bulky, the Thunderbird is tall and bulky. While there are side panels seen on the RE, the Dominar, despite being a Bajaj motorcycle, lacks the same and doesn’t feature them in design. Front of the Thunderbird is typical as it has a round headlamp which has a projector and LED ring and does the job really well. 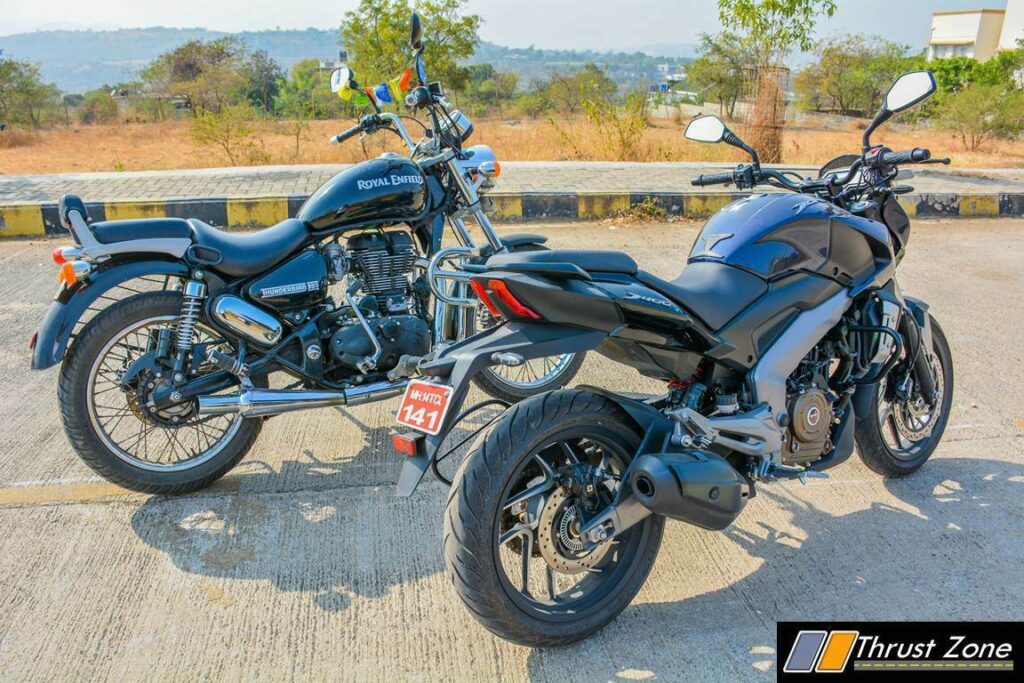 Bajaj uses a high power LED lights only to make it look thoroughly modern. Rear again, both have LED’s and both them fail to impress to a large extent when it comes to design. Dominar wins this round because it is very fresh. We would love to see next generation Thunderbird as it has the potential to stand up against its fierce competitor that is here already.

Riding position on both motorcycles are extremely comfortable. While the Thunderbird offers old school comfort as it brings the handlebar to you and the seat is low and you have your back straight with center set footpegs. Dominar uses rear set foot pegs and raised handlebar which is slightly sporty but still, intensely comfortable for long rides as it lets you grip the tank for better control. Dominar seats are firm and so are the Thunderbird seats. 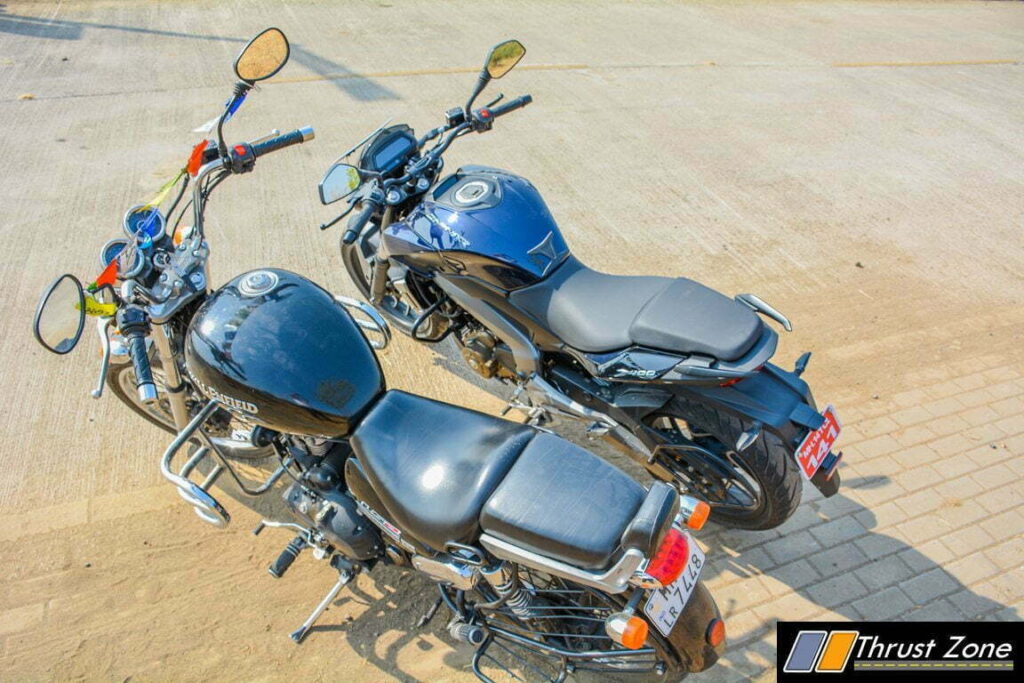 Dominar offers more comfort for pillion, RE falls slightly behind, but counters with offering back seat rest to make things comfier. Dominar has the traditional grab handles to keeps things in check for pillion. Mirrors are great on both motorcycles and they offer good vision of what is behind. 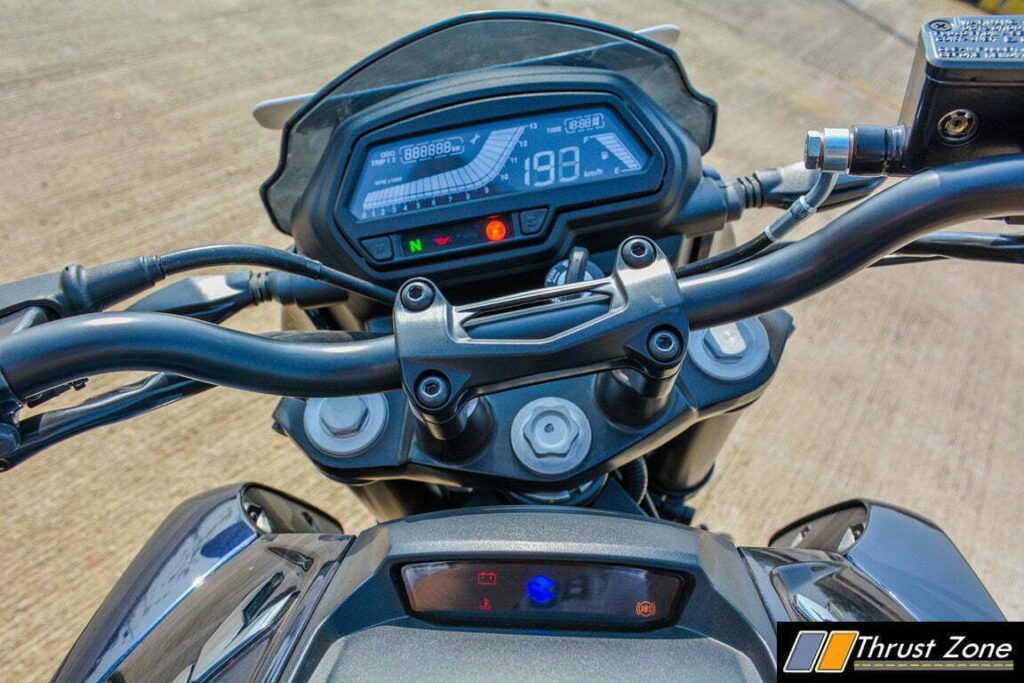 When it comes to meters, both are similar when it comes to offering features. Both motorcycles offer usual tell-tale lights, service indicators, time and two trip meters with odometer. Bajaj offers a bit more as it is an all digital unit and splits the clocks into two. While the main unit offers digital speedo and tachometer with the usual information. Most tell-tale lights are below the main clock and second one can be seen on the tank just like traditional new age cruisers. Thunderbird continues to offer analogue meters in both aspects. 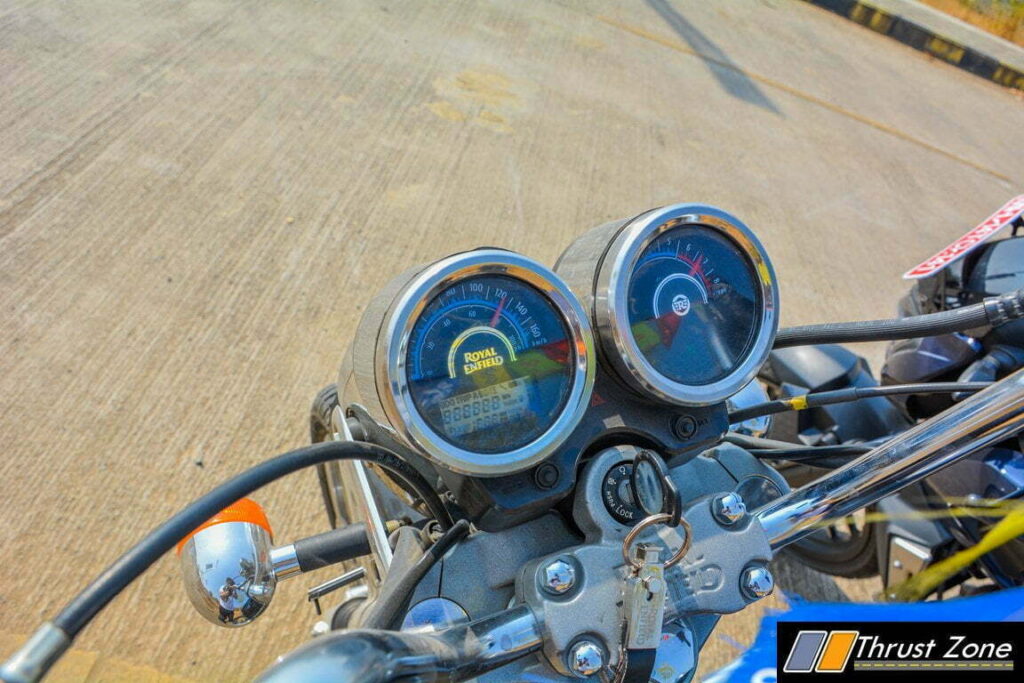 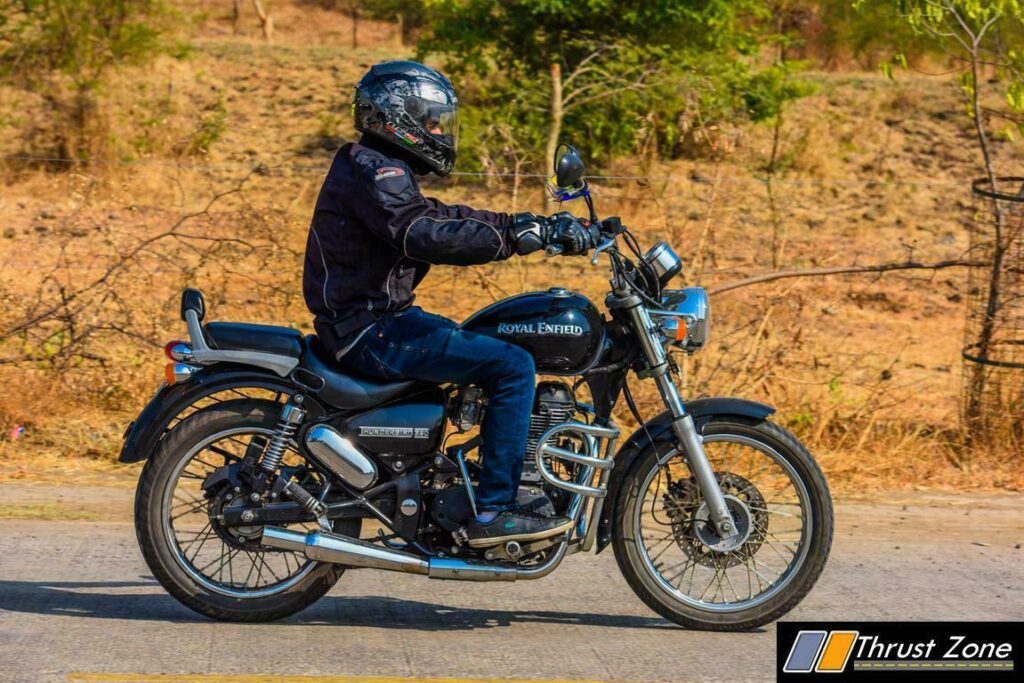 Performance wise, the displacement is the only thing which is quite similar. Thunderbird stands at 346cc while the Dominar stands at 373cc. After this, all of it goes haywire. The Dominar 400 is liquid-cooled, has 4-valve per cylinder, fuel-injection and makes 35 PS and 35 Nm. The Thunderbird has twin spark, carburetor engine with 2-valve layout, lacks an oil-cooler and makes 19.8 BHP and 28 Nm of torque. Dominar 400 offers slipper clutch to make sure clutch is light and progressive and offers a smoother and less thud when it comes to shifting the gears as well when compared the RE Thunderbird 350. 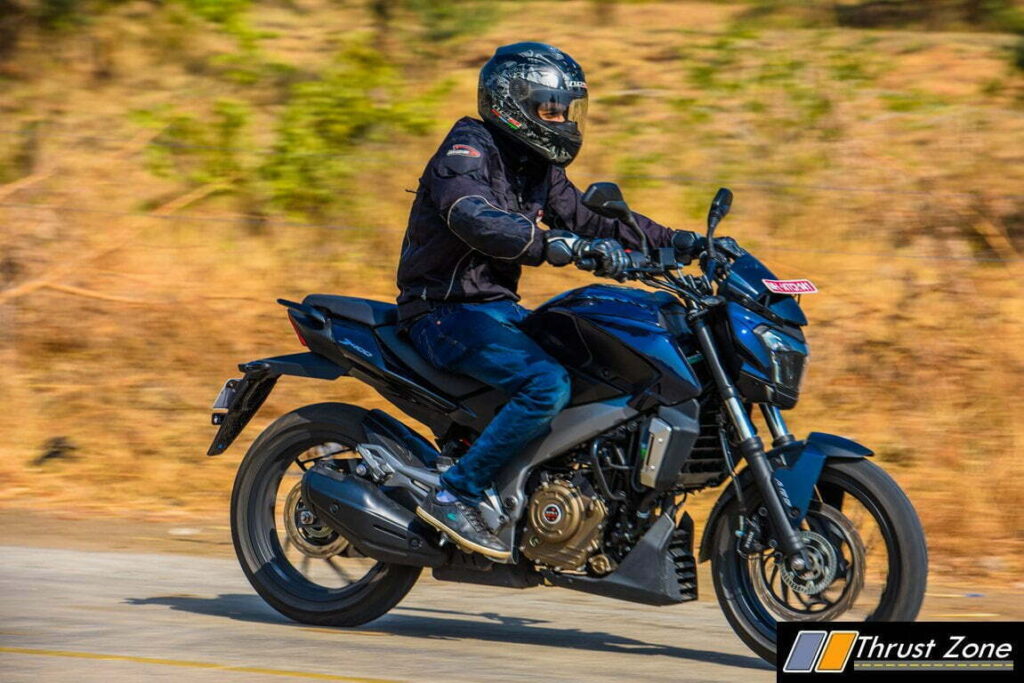 While the Thunderbird can only offer low and midrange torque and is able to cruise just under or at 100 km/hr, the Dominar does offer all of that with more top-end power and can cruise 120 km/hr for hours. Both motorcycles offer vibrations, but on the RE, it can cause some serious issues if you start redlining it, Dominar won’t cause that much trouble to your body parts and won’t make your hands and feet go numb if you start riding it hard and fast either. Not the same can be said about the Thunderbird 350. However, the Thunderbird thumps royally and has an exhaust which is a hit or miss with masses as we have seen over the years, sorry, a century. The Dominar 400 sounds sporty in every aspect and still has a throaty exhaust note to impress cruiser lovers. 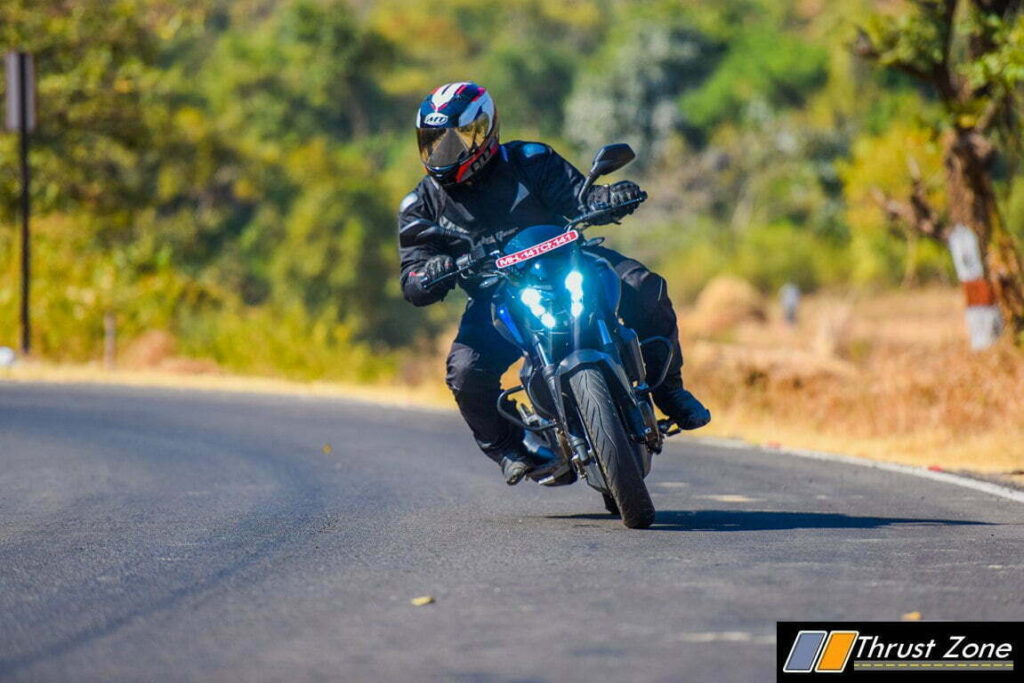 Dominar 400 has a topspeed of almost 150 km/hr, the Thunderbird will give up post 120 km/hr. Thunderbird 350 returns around 25-30 km/l. The Dominar can easily return 30 km/l and above in any riding situation. More so on the highway which is rated around 34-36 km/l. Overall, the Dominar with its flat torque curve offers power everywhere and gives you the flexibility in every situation. Let it be racing of the lights, roaming on the streets or cruising at the comfort of your chosen speed. RE Thunderbird offers a smooth engine but only till speeds of 80 km/hr. 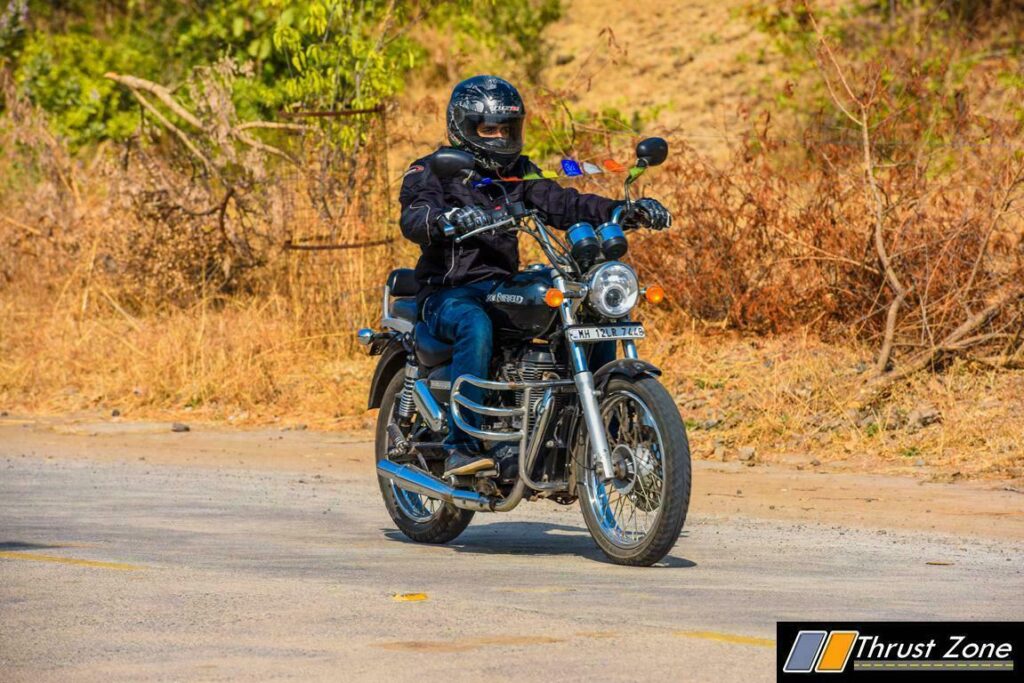 Dynamically, the Royal Enfield has a single downtube chassis, large 18-inch spoke wheels, high travel suspension on both ends with large tyres fitted. Royal Enfield has good ride quality to offer, with a light front end to make sure city roads are destroyed and nothing filters to the rider. The lack of an modern swingarm and chassis along with an engine that doesn’t love to be on the boil, it isn’t the most fun around the twisities. Cornering clearance is almost non existent and the moment you start cornering, the footpegs start grinding. Highway stability at any given speed is good enough on the RE.

Dominar 400 on the other hand is agile and stable in the corners and is extremely rewarding to ride. Cornering clearance is in abundance. Dominar feels light at low to medium speeds to make sure it is maneuverable in the city with least effort. Highway stability is spot on even at 160 km/hr. Ride quality can be stiff, but not harsh enough at any time to throw you off the saddle. 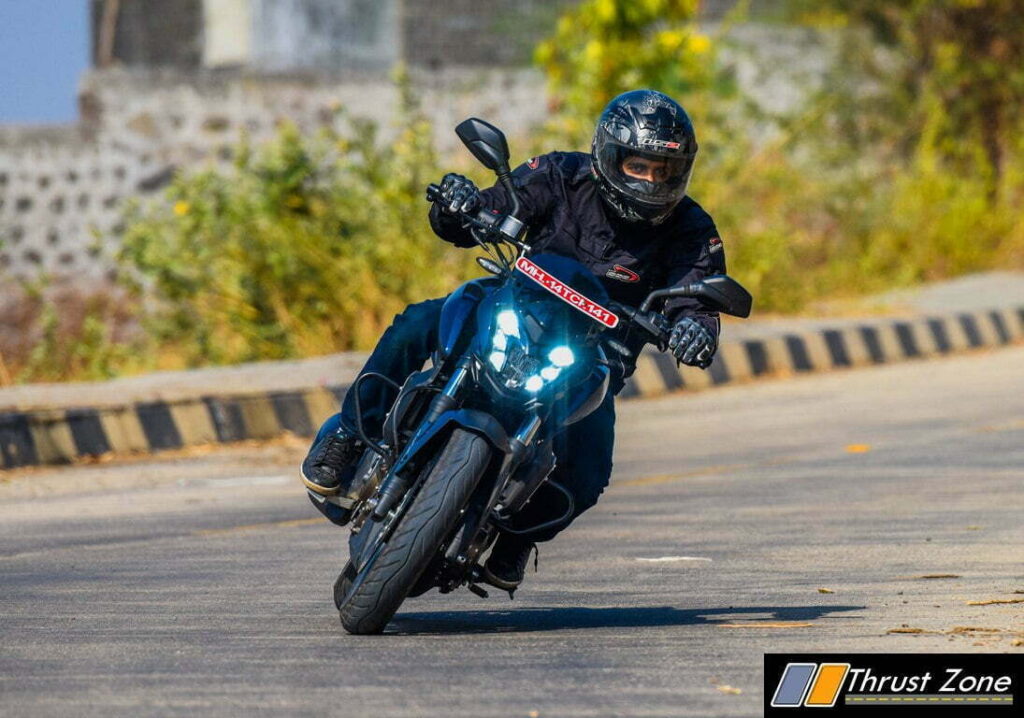 All of this courtesy of a motorcycle that sits lower has a modern perimeter chassis and pressed steel swingarm on offer with monoshock that is gas charged and has ‘Spring on Spring’ technology. While both are heavy weight champions, as the Dominar is criticized for its weight, it still weighs at 182 kgs which is 10 kgs lighter than the Thunderbird 350, which stand at 192 kgs. Brakes are much better on the Dominar and it has ABS backing for added safety. Thunderbird brakes are just enough to do the job on both ends with good bite. Overall, the Dominar 400 is better at what is does by a big margin.

The comparison may hint towards the Dominar 400 victory, because it does. It is a motorcycle perceived in the recent past. Thunderbird idea and concept is way to old to be spoken about. However, it has the charm and magic to still lure customers to showroom. The thumping exhaust, the raw muscular design and the tag of ‘riding a Royal Enfield’ is still a ‘Royal’ thing for many people out there. 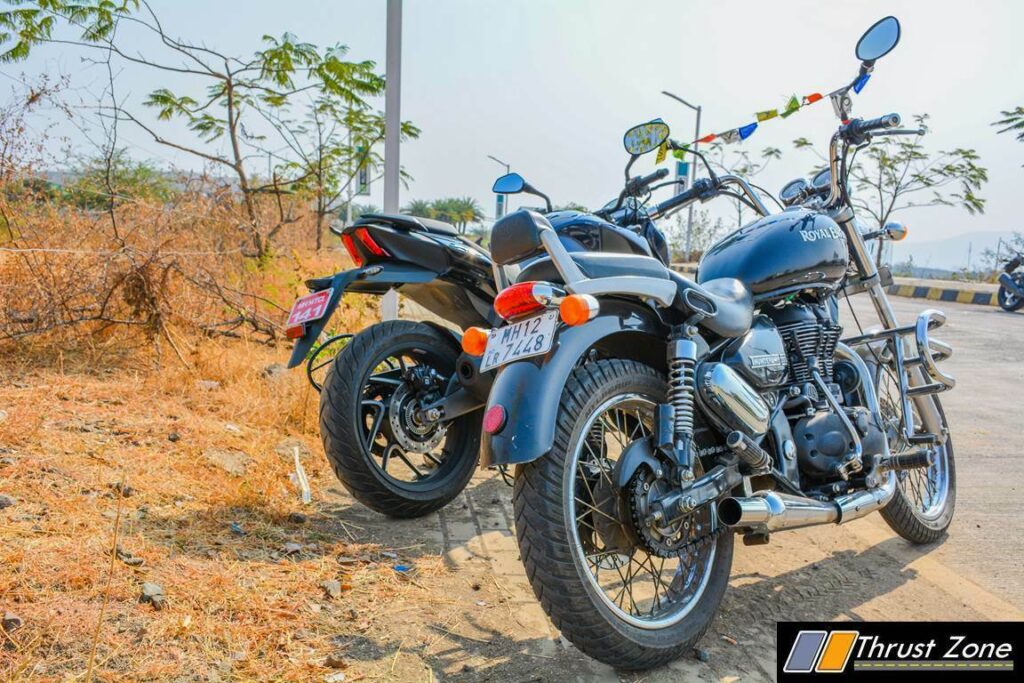 Dominar 400 trumps in every way as it offers most of it, in its own unique way and offers a lot of bang for your buck. With the net of safety and comfort essentials on offer, Dominar 400 is on the right track to take on its rival that it intends to fight with ample performance and well executed design. If, unless, Royal Enfield wants to fight back and gets us new machines that can stand close to dominating machines of today that are in the market right now. For now, Dominar takes one of the competitor down and has several next in sight. 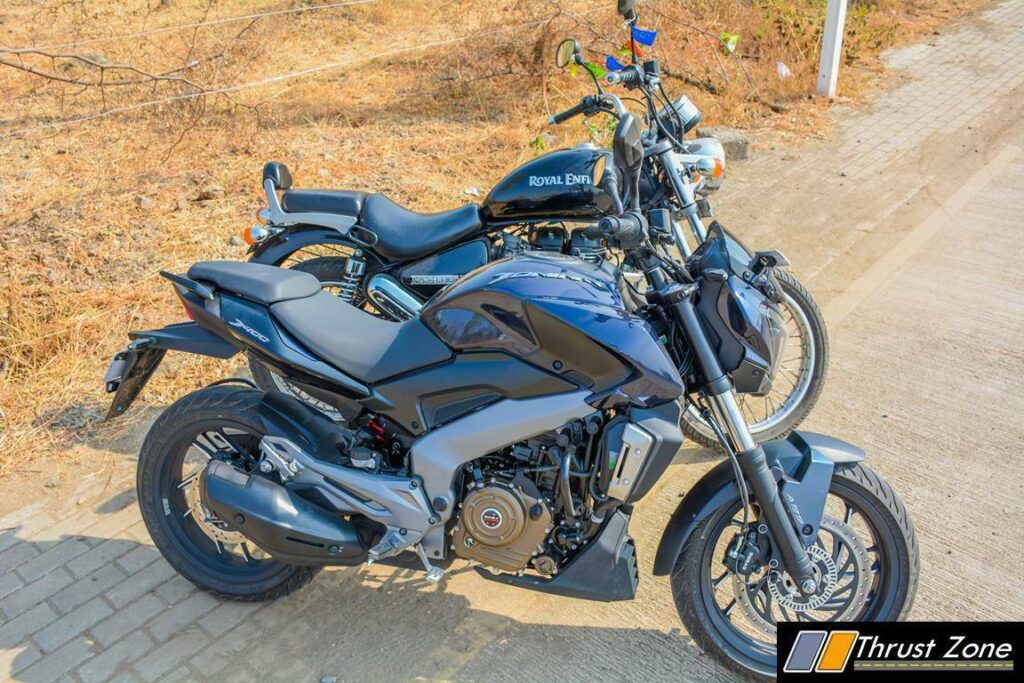 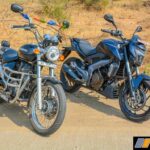 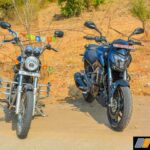 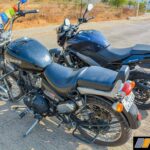 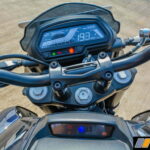 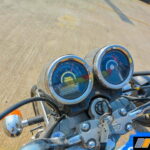 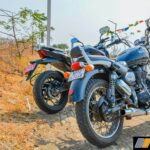 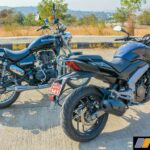 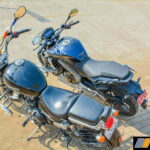 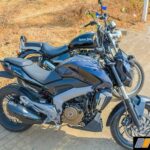 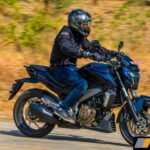 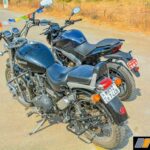 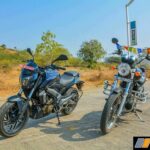 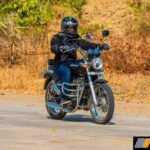 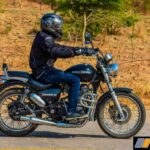 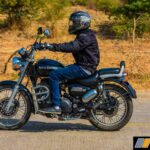