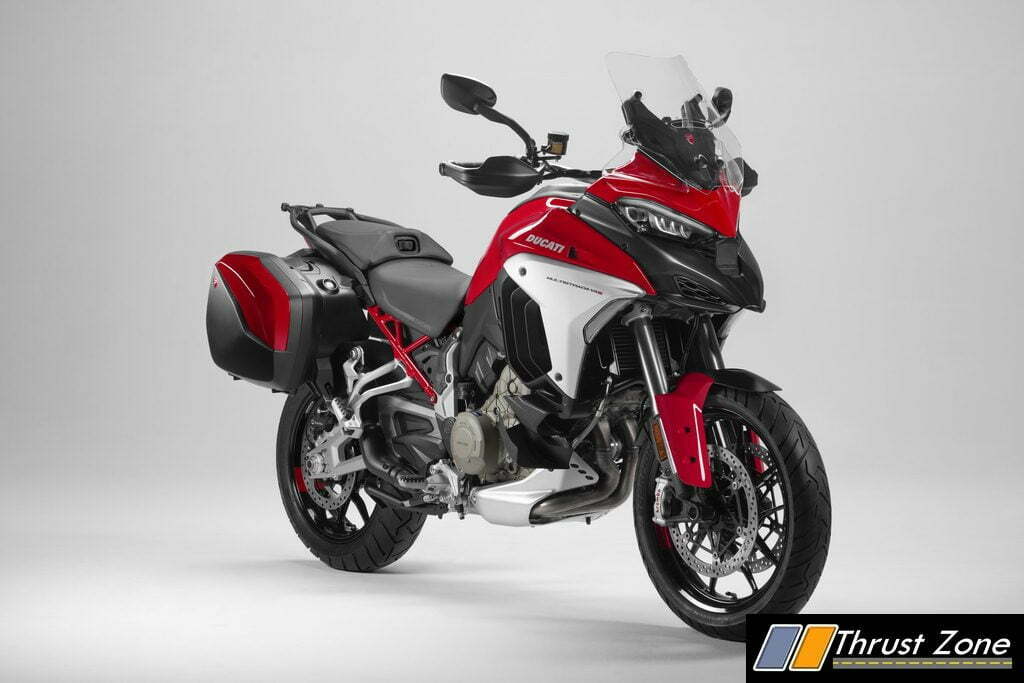 Ducati today announced the launch of its much-awaited adventure tourer, the all-new Multistrada V4 and V4 S, priced at INR 18.99 Lacs and INR 23.10 Lacs respectively (Ex-Showroom Pan India). The Multistrada V4 is an all-new motorcycle from the ground up that will headline Ducati’s family of adventure Tourer bikes in both capability and technology prowess.

This 4th generation of Multistrada represents the best of Ducati’s technology, performance, and capability. The name also serves a strong purpose, where “multi” stands for “many” so “Multi-Strada” means “many roads”, thus, falling in line with the bike’s sheer ability to dominate all roads with ease, thanks to its new V4 Granturismo engine, integrated safety and balanced chassis.

Now, with this all-new generation, Ducati has also reimagined this iconic do-it-all machine. The biggest change starts with the heart of the project, its powerful engine called the V4 Granturismo, tuned for all terrain performance, and derived from the highly acclaimed Desmosedici Stradale which does duty on the Panigale V4 and the Streetfighter V4. The all new V4 Granturismo engine guarantees extremely smooth operation at low revs and a linear torque curve as well. So, riders will be able to conquer more technical, and difficult terrains with an engine that delivers more power in an effortless manner giving rider more control, and confidence to rule all roads.

The Multistrada then is a one-of-a-kind motorcycle that not only combines the pleasure of on-asphalt sporty riding, but also gives overall satisfaction and easy off-road handling together with unprecedented comfort on longer journeys and in everyday use.

Mr. Bipul Chandra, Managing Director of Ducati India said, “The wait was long, but I am sure it will be worth for all the Ducatisti that waited patiently for the bike. There’s no other way of saying this but the Multistrada V4 is a state-of-the-art technological marvel, which can take you across the globe with ease. The new Granturismo V4 engine is specifically designed keeping touring and off-road riding in mind and it is the heart of this whole project. I am thrilled not just for the Ducatisti but also for this segment as the Multistrada V4 ushers in, with performance, design and technology that will make any enthusiast weak in his/her knees! I look forward to seeing it in India, especially on the roads less taken.”

Both the Multistrada V4 and V4 S boast of the V4 Granturismo engine, V4 – 90°, counter-rotating crankshaft, Twin Pulse firing order, which puts out 170 Hp at 10, 500 rpm and 125 Nm of torque at 8,750 rpm. This liquid-cooled engine has four valves per cylinder and bore and stroke measurements of 83 and 53.5 mm, respectively. The Multistrada V4 and V4 S gulps in the fuel mix through 46 mm cylindrical-section throttle bodies controlled by an advanced Ride-by-Wire system.

The self-servo wet slipper clutch can now be operated with less on-lever effort thanks to the new hydraulic control system. The Multistrada V4 and V4 S engine has a maintenance interval of 15,000 km, with valve clearance inspection at every 60,000 km, which is the longest main service interval in the industry. This offers the rider a peace of mind and faith to conquer long trails without doubts, while also reducing maintenance costs considerably.

The V4 Granturismo engine has been designed for road and off-road use and it also exploits, when needed, all the technical benefits that Ducati has developed over years of experience in the world of competition. Among these, the counter-rotating crankshaft, which by working “against” the inertia generated by the wheels, enhances handling, reduces pitching, and consequently improves efficiency and riding pleasure even on the road.

In addition, Ducati engineers also concentrated on the gear ratio, with a short first gear excellent for maneuvering at extremely low speeds, uphill starts even when fully loaded and off-road sections. The sixth gear, as a result is tall and ideal to tackle lengthy motorway travel. Furthermore, the Multistrada V4 also gets rear engine bank deactivation. In doing so, when the bike is stopped at the traffic lights and is in idle with neutral engaged, the rear bank is deactivated (there is no combustion in the cylinders), improving the thermal comfort of the rider and passenger, thanks to the lowering of temperatures and reduced fuel consumption.

The V4’s design closely echoes the first iconic Multistrada (mass loaded on the front, extremely sleek rear section and ultra-compact front end) but the new Multistrada V4 goes beyond borders, right where rider, machine and technology create a perfect whole. Clean surfaces, taut lines and contrasting front and rear volumes remain and the hallmark design and functionality are perfectly combined to offer supreme technology. From the front and rear radars to the aerodynamic appendages, from the Perspex screen to the dashboard, from handlebar switchgear to the dedicated compartment on the fuel tank for storing and recharging the smartphone: every single detail has been embodied to give life to one of the most technologically advanced motorcycles ever built.

The all-in-one bike is immediately recognizable as a Multistrada but is a step ahead in terms of engine, technology and design. The bike stands out for its refined silhouette and at the same time it can speak the language of adventure and passion for a long-distance trip. For this reason, a lot of attention was paid during the design phase to achieve a reduced seat height, adjustable, with two positions; 840 mm and 860 mm (810 mm low seat and 875 mm high seat are also available as accessories). This added value is crucial especially in low-speed maneuvers, even when fully loaded, and especially when the new Multistrada V4 can load over 230 kg.

The Ducati Multistrada V4 is the first production bike in the world to adopt radar technology. Radars are advanced aid systems capable of supporting and making riding more comfortable thanks to the ability to reconstruct the reality surrounding the motorcycle. This technical solution manages two functions: Adaptive Cruise Control and Blind Spot Detection.

It should be underlined that the adaptive intelligent systems are an aid to the vehicle rider’s riding and must always be kept under control or adjusted by the rider. Advanced systems are not autonomous riding systems and therefore do not replace the rider. Always attentive to safety on the road and on the racetrack, Ducati emphasizes that the rider is and remains responsible for riding and must always maintain a prudent behavior appropriate to the various environmental situations.

Front radar is perfectly integrated into the bike, which by means of controlled braking and acceleration automatically adjusts the distance (selectable on four levels) from other vehicles when riding at a speed between 30 and 160 km/h. In particular, the authority of the system in terms of deceleration and acceleration has been limited to ensure that the rider can maintain constant control of the vehicle in any situation. The Adaptive Cruise Control (ACC) system can be activated and adjusted using the dedicated buttons located on the left block. Thanks to the DQS up & down, the rider can shift up or down without the ACC deactivating during the acceleration and deceleration phases. ACC system allows for more comfortable riding, especially on long motorway journeys.

Rear radar technology can detect and report vehicles approaching in the so-called blind spot, namely the area not visible either directly to the rider or through the rear view mirrors. The BSD (Blind Spot Detection) system monitors this situation thanks to the LEDs positioned on the rear-view mirrors. The BSD system also signals the vehicles approaching from behind, at high speed. In both cases, if the user activates the direction indicator expressing the intention to change lanes, the BSD flashes the LED signaling a potentially dangerous condition. 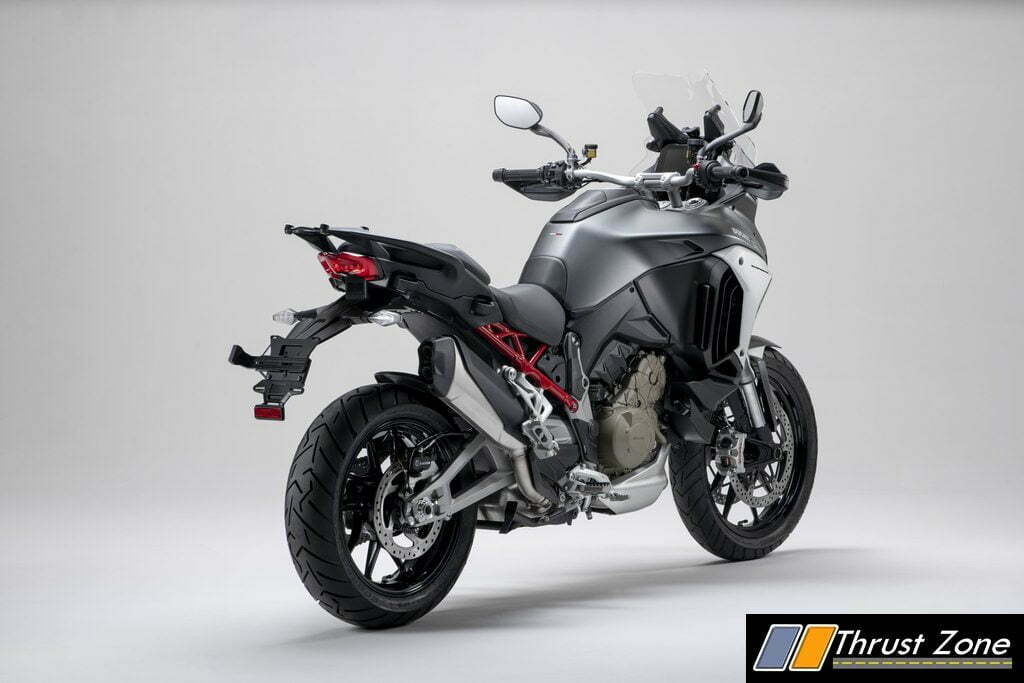 The Multistrada V4 is fitted with a 5” color TFT display with optimal resolution and perfect readability in any light conditions. The easy-to-read graphics feature a round digital tachometer which displays gear number and further useful information, such as fuel gauge, temperature, and engine temperature while the panels display the levels of the electronic controls and other information.

The Multistrada V4 S features an adjustable 6.5” color TFT unit. Furthermore, on the S version a joystick has been added on the left switchgear, to ensure easy navigation through the new and intuitive menu. Other new features include the Ducati Connect system, which allows, via Bluetooth and wi-fi, the ‘mirroring’ function of the mobile phone app on the dashboard and can be controlled via the joystick. It displays additional information, such as suspension settings and via Sygic GPS navigation app, also provides the navigation system map on the TFT unit itself. In addition, the user can access the Ducati Multimedia System (DMS) via Bluetooth, to manage incoming/outgoing calls and listen to music.

On the electronics front, the Multistrada V4 represents the top of the line in the motorcycle segment, which is true in terms of safety, comfort, performance, and connectivity features. The inertial platform (IMU) manages the operation of Cornering ABS, Ducati Wheelie Control (DWC) with eight setting levels, Cornering Ducati Traction Control (DTC).

The Multistrada V4 range features the Ducati Safety Pack (DSP), which includes Brembo braking system with Bosch 10.3ME Cornering ABS, adjustable on three levels. Cornering ABS makes use of the Bosch IMU (Inertial Measurement Unit) platform, which communicates in real time data concerning lean angles. All this is to optimize front and rear braking power on both wheels even with the bike at considerable lean angles, thus preventing serious injuries.

The latter also allows adjustment of the preload and hydraulic brakes in compression and extension of the rear shock absorber. Fine adjustment takes place instantly and is integrated into the Riding Modes or can be personalized via the on-board computer.

The semi-active system interfaces with the sensors to “read” riding style, as well as road surface conditions and continuously adjusts the suspension setting. This means a perfect set-up at whatever conditions, on road and fully loaded as well.

The Multistrada V4 features twin Ø320 mm brake discs at the front, with Brembo M4.32 front calipers while the Multistrada V4 S is equipped with Ø330 mm brake discs, along with Brembo Stylema calipers. Both versions come with 19” wheels (120/70 Pirelli Scorpion Trail tyres) at the front and 17” wheels (170/60 Pirelli Scorpion Trail tyres) at the back, with the Multistrada V4 S getting an option for Spoked Wheels, straight from the factory. The spoked wheels version will come to India later this year.