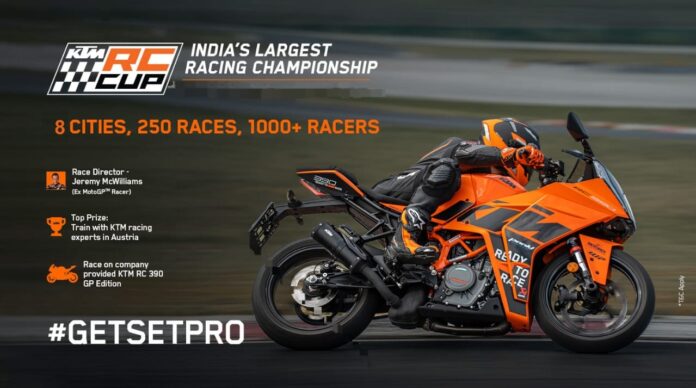 The buzz of activity at the eighth edition of India Bike Week (IBW) got a rev up as KTM, the world’s No. 1 premium motorcycle brand, announced India’s largest racing championship – KTM RC CUP – a multi-city event that would give a platform for amateur racers to learn from and compete with the best.

The KTM RC Cup is the crown jewel of KTM Pro-XP, a unified program offering a range of exciting riding experiences to KTM owners across trails, tarmac & track. 25,000+ KTM owners have participated in events across India to become better at riding. The KTM RC Cup promises to turbo-charge the track experience and take it all over the country, including riders outside the KTM fold.

KTM, a global champion in moto-sports, announced that the KTM RC Cup will be held between January and March 2023 in eight cities – Mumbai, Ahmedabad, Delhi, Chennai, Coimbatore, Bangalore, Hyderabad and Kolkata. Registrations will open soon, and the best racers in the country will not only get a chance to compete but also get trained by some of the biggest names in motorcycle racing.

1000+ racers will participate in the regional qualifiers, and a select group of city winners will race at MMRT, Chennai, to win the national title.

The top 3 winners of the KTM RC Cup will win a visit to the global HQ of KTM in Austria, and the prize includes:

– A visit to Motohall at Mattighofen in Austria, where they’ll learn the craft of racing from KTM experts

– An opportunity to watch a MotoGP race live

The race will be directed by Jeremy Mcwilliams, an ex-MotoGP racer with two podium finishes in the 500cc class and a win in the 250cc class. The race will be supported by Emmanuel Jebaraj, seven-time National INMRC Champion and a founder of Gusto Racing, India.

Speaking at IBW 2022, Mr. Sumeet Narang, President (Probiking) at Bajaj Auto Ltd., said, “Racing is core to KTM’s DNA and with RC cup we would be launching the biggest amateur racing platform in India yet. We look forward to the best of racing talent competing here and get a chance to be trained by the best from KTM. The fan reaction at IBW has been very heartening and come January, we look forward to getting all KTM fans READY TO RACE”

On display at the KTM stall at IBW was a fantastic range of READY TO RACE international bikes that created a flutter among biking aficionados. Enthusiasts got a chance to see the iconic KTM machines like Brad Binder’s KTM RC 16, which has won the MotoGP seven times and taken ten podiums, Matthias Walkner’s KTM 450 Rally – the king of Dakar, along with the 1290 SUPERDUKE R, 890 ADVENTURE R, 890 Duke GP, and the incredibly popular 390 DUKE, the corner rocket.