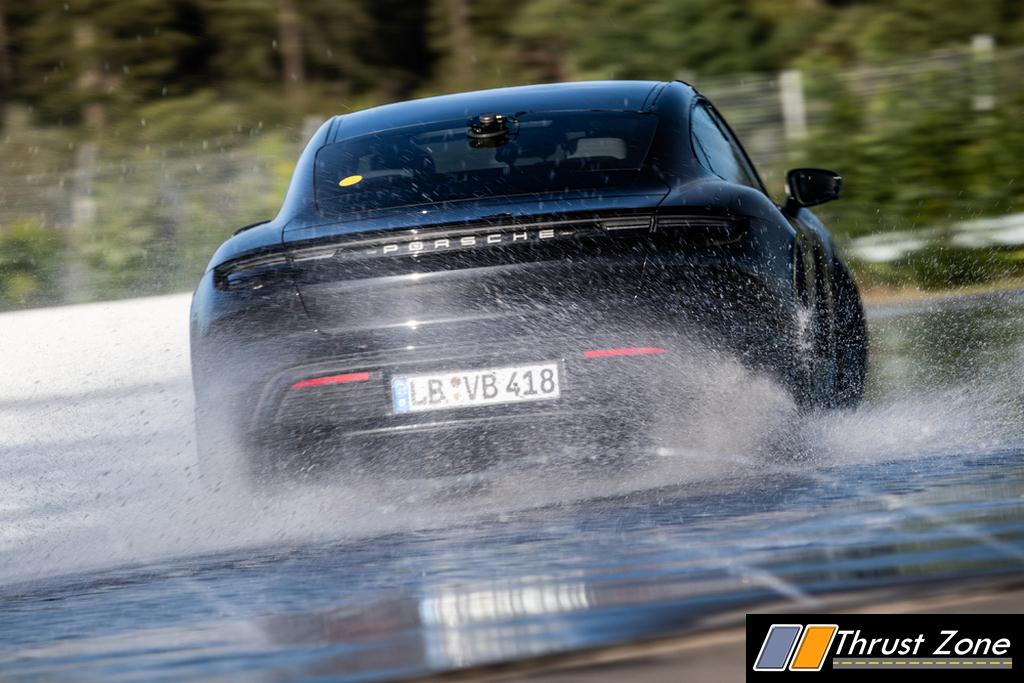 The Porsche Taycan has entered the Guinness World Records™ for the longest drift with an electric vehicle. The scene of the world record was the Porsche Experience Centre (PEC) Hockenheimring. Porsche instructor Dennis Retera did 210 laps on the 200 metre-long drift circle without the front wheels ever pointing in the same direction as the curve: after 55 minutes the sideways expert had covered a total of 42.171 kilometres. By completing this marathon distance, Retera secured the world record for the longest continuous drift in an electric car. The average speed was 46 km/h. The record was achieved with the rear-wheel drive version of the Taycan, which is already on sale in China.

“When the driving stability programmes are switched off, a powerslide with the electric Porsche is extremely easy, especially of course with this model variant, which is driven exclusively via the rear wheels,” says Dennis Retera, “Sufficient power is always available. The low centre of gravity and the long wheelbase ensure stability. The precise design of the chassis and steering allows for perfect control at all times, even when moving sideways”. The Dutch is now the Chief Instructor at the Porsche Experience Centre Hockenheimring, but previously competed in karting, single seaters and endurance races. “Nevertheless, it was also very tiring for me to keep my concentration high for 210 laps, especially as the irrigated asphalt of the drift circuit does not provide the same grip everywhere. I concentrated on controlling the drift with the steering – this is more efficient than using the accelerator pedal and reduces the risk of spinning.”

The attempt took place under the supervision of Guinness World Records™ official record judge Joanne Brent on the irrigated driving dynamics area of the PEC. Brent has been supervising record attempts of all kinds for Guinness World Records™ for over five years: “We’ve had some drift records, but with an electric sports car it’s something very special for us too. Here Porsche has done real pioneering work,” she said. The Guinness expert meticulously documented the record with a whole range of technical aids and other independent experts: before the test, a local land surveyor measured the 80-metre diameter area of the Porsche Experience Centre with millimetre precision. GPS and yaw rate sensors within the vehicle were used for documentation purposes, as was a camera installed on the roof of the track’s control tower, with which the record ride was filmed. 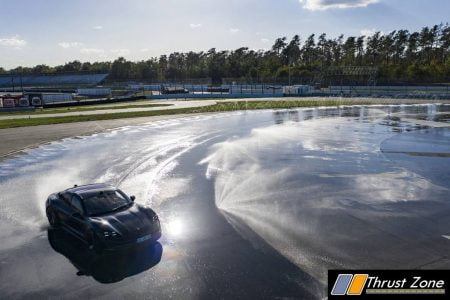 Another independent expert was Denise Ritzmann. Prior to the record attempt, the engineer confirmed the standard and roadworthy condition of the pre-series Taycan with rear-wheel drive on behalf of testing organisation DEKRA. Ritzmann knows all about drifting: she was European drifting champion in 2018 and 2019 and was also responsible for ensuring the Taycan remained in a permanent drift throughout the record attempt: “You can see at a glance whether the front wheels are pointing in a different direction to the curve. As long as this is the case, the car is drifting,” she explained. Together with Brent, she also counted the laps completed during the record attempt.

The Porsche Taycan is already a record holder in many other disciplines: whether it is the gruelling 24-hour endurance run over 3,425 km on the high-speed track in Nardò; the best time in its class of 7:42 minutes on the Nürburgring-Nordschleife or the 26 sprints from a standing start to 200 km/h at the airfield in Lahr – the record statistics of the first all-electric sports car from Porsche make impressive reading.

Renault Winter Camp Will Save You Cost And Increase Your Vehicle Life!