Ford And Mahindra Come Back Together Again With A Joint Venture

What looks like a win-win situation on paper the moment, the deal has been signed. Mahindra and Ford will leverage this intensely. We say, they have to!

To leverage each other’s strength, Mahindra and Ford have entered into a joint venture (JV) which will be operational by mid-2020 next year. The JV will result in automakers jointly developing, marketing and selling products for emerging markets across the globe including India. Once operationalized, the JV valued at Rs 1,925 crore will give Mahindra and Ford a combined share of 14% in the Indian market while taking their annual production capacity to 1.2 million vehicles.

Mahindra will own a majority 51% stake in the joint venture while the rest of the 49% will reside with Ford. The management of the JV’s board will have equal participation from both Ford and Mahindra; however, operationally the joint venture will be lead by the Mahindra. The assembly plant of the Ford located in Sanand and Chennai along with personnel will operate under the JV but American automakers will retain its engine plant, smart mobility, and credit operations outside the purview of this JV. 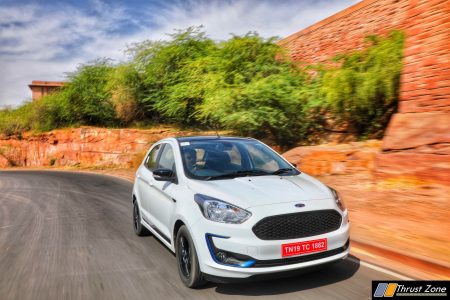 Commenting on the development, the top executive from the Mahindra emphasizes that this JV will help both organizations to get the best of each other’s strength although both the companies will continue to have a separate identity in the Indian market. Ford and Mahindra will continue to sell their cars via their own dealership networks and the JV will be focused on the co-development of the new products to help save research and development costs associated with the process.

A total of 7 new products are expected to emerge from this JV including the much talked about Ford’s C-SUV. Just so you know, Mahindra will build C-SUV and this W601-derivative will share the platform with the next generation XUV 5OO. It will be powered by Mahindra’s new 2.2-liter BS6 engine and positioned above the Hyundai Creta when it launches in the market.

There hasn’t been any formal announcement about the other two SUVs both of which will be built by Ford. We expect the one SUV to be a brand new sub-4m SUV which might use Ssangyong Tivoli or Ford’s own Brezza-rival offering (which is under development) architecture as underpinnings. Despite sharing platform, Ford and Mahindra SUVs will look different in flesh to project different identities.

The JV will also focus on the development of electric vehicles as Mahindra is working on to bring its own electric version of Ford Aspire in the market by 2021. Ford and Mahindra will also share the power trains with Ford’s EcoSport all set to ditch its own 1.0-liter EcoBoost petrol engine in the favor of 1.2-liter petrol motor from the Mahindra next year. Ford will phase out EcoBoost before BS6 emission norms come into effect. The JV will also help Mahindra to leverage Ford’s distribution network to export its cars and SUVs globally including the market such as Russia, Australia, ASEAN, Middle-East, and Africa among others.