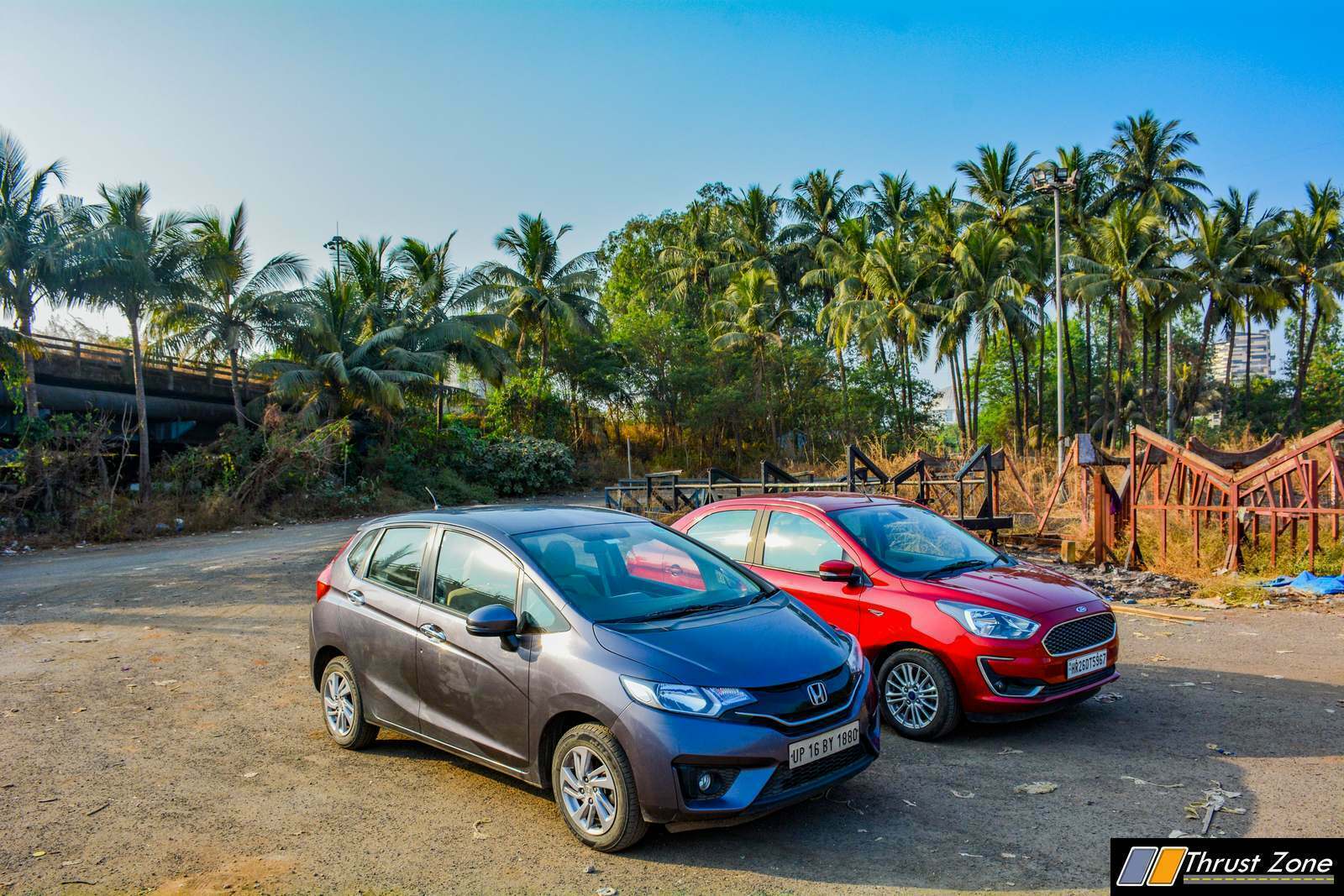 Ford Aspire and Honda Jazz are two formidable contenders vying for the attention of Indian auto buyers for quite some time now. While Ford Aspire belongs to the category of the compact sedan, Honda Jazz is counted among the premium hatchbacks in the country. Both of these cars come with their own merits and demerits. They are often termed similar to each other. Price points are also close to each other. 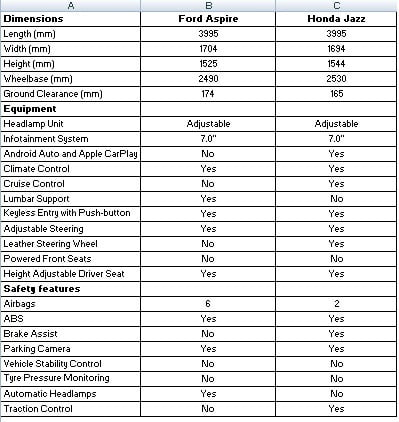 This has been a confusion for a long time, especially enthusiasts. Both are cars which drive well and offer value in one way or the other. We spent quality time with both of them as the Jazz petrol and diesel variants stayed for two weeks each and the Ford Aspire was our long term vehicle for three months and in this comparison which will suit your tastes. 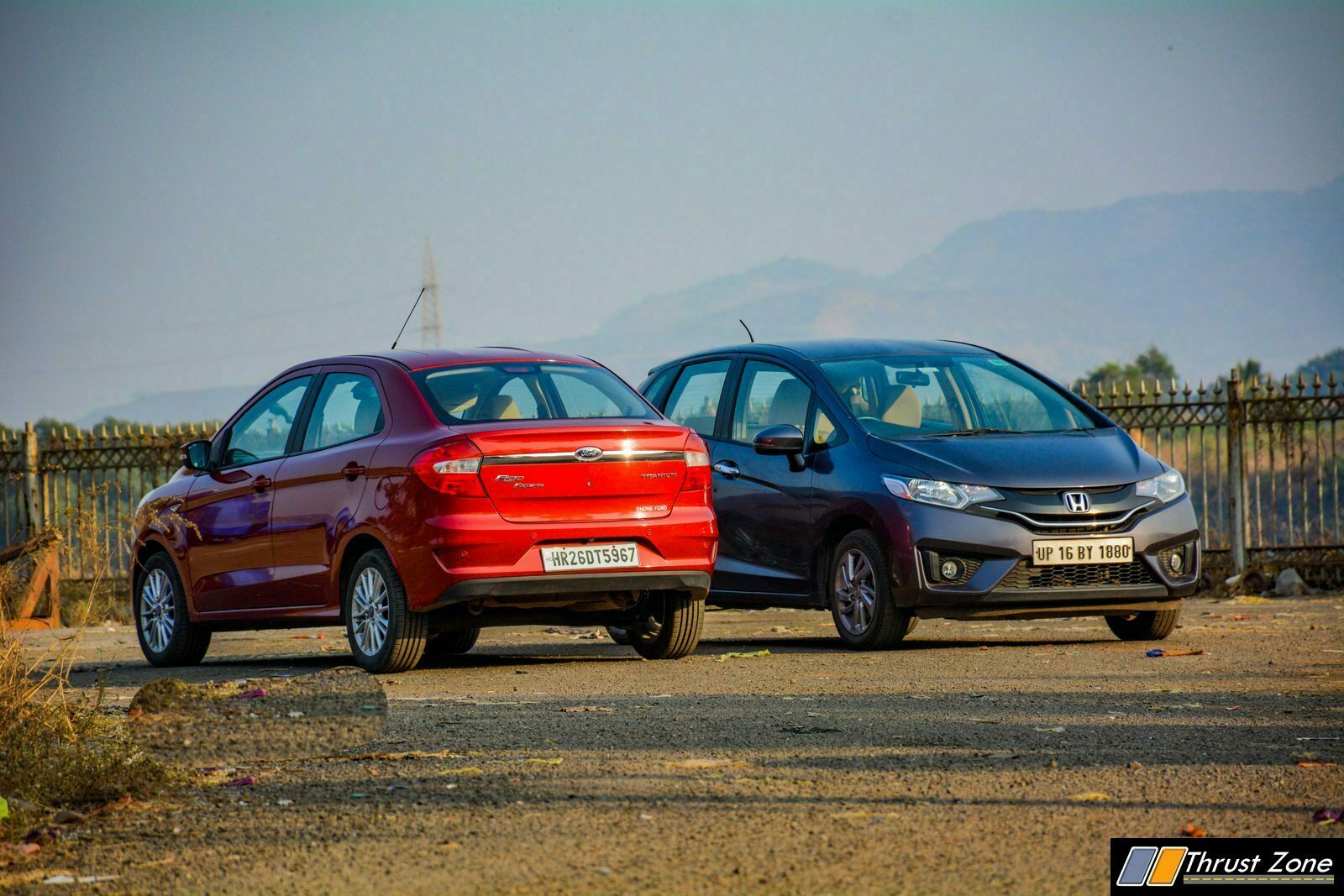 Both cars are great in the terms design when it comes to silhouette. Jazz is a proportionate hatchback since day one and the Aspire has been known to have the same. The tail-lights of the Jazz are signature when it comes styling and helps it identification from miles away. The Aspire is known for is well integrated boot and a great Aston Martin inspired front grille. Both look tall enough and with similar wheelbase which means they look substantial but at the same time Jazz has the MPV look at the rear three quarter meanwhile the Aspire looks like a three box sedan sculpted just right. At the end of the practically, both are sub four meter cars, one of the many reason why they are compared a lot. 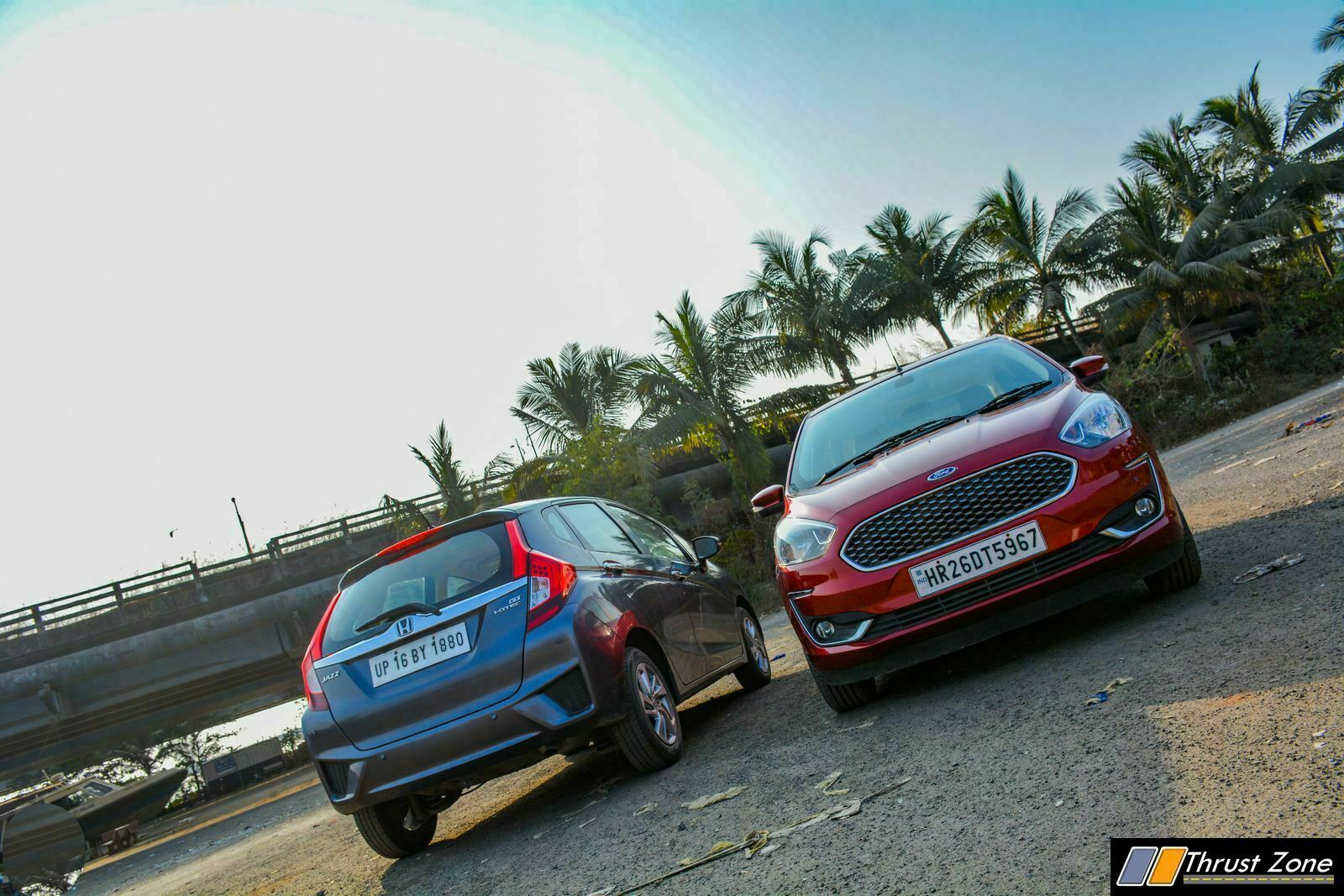 We will leave the charts to tell you about the specification, feature list and dimensions and we have told you about them in our other reports as well over the time as well. What we want to tell you is that the Ford’s interior feels better in quality, has a better infotainment system in this BS4 version over the Honda Jazz BS4 version. Sound system is good in both cars surprisingly.

The Jazz’s digi pad system is easier but doesn’t feel very modern. Petrol Jazz misses out keyless entry and start-stop button. The sense of space and light is higher in the Jazz and it is bit more roomier of the lot. The green house is so high that it heats up the car a lot and in the age of no sunfilms hence it is a bummer at times. 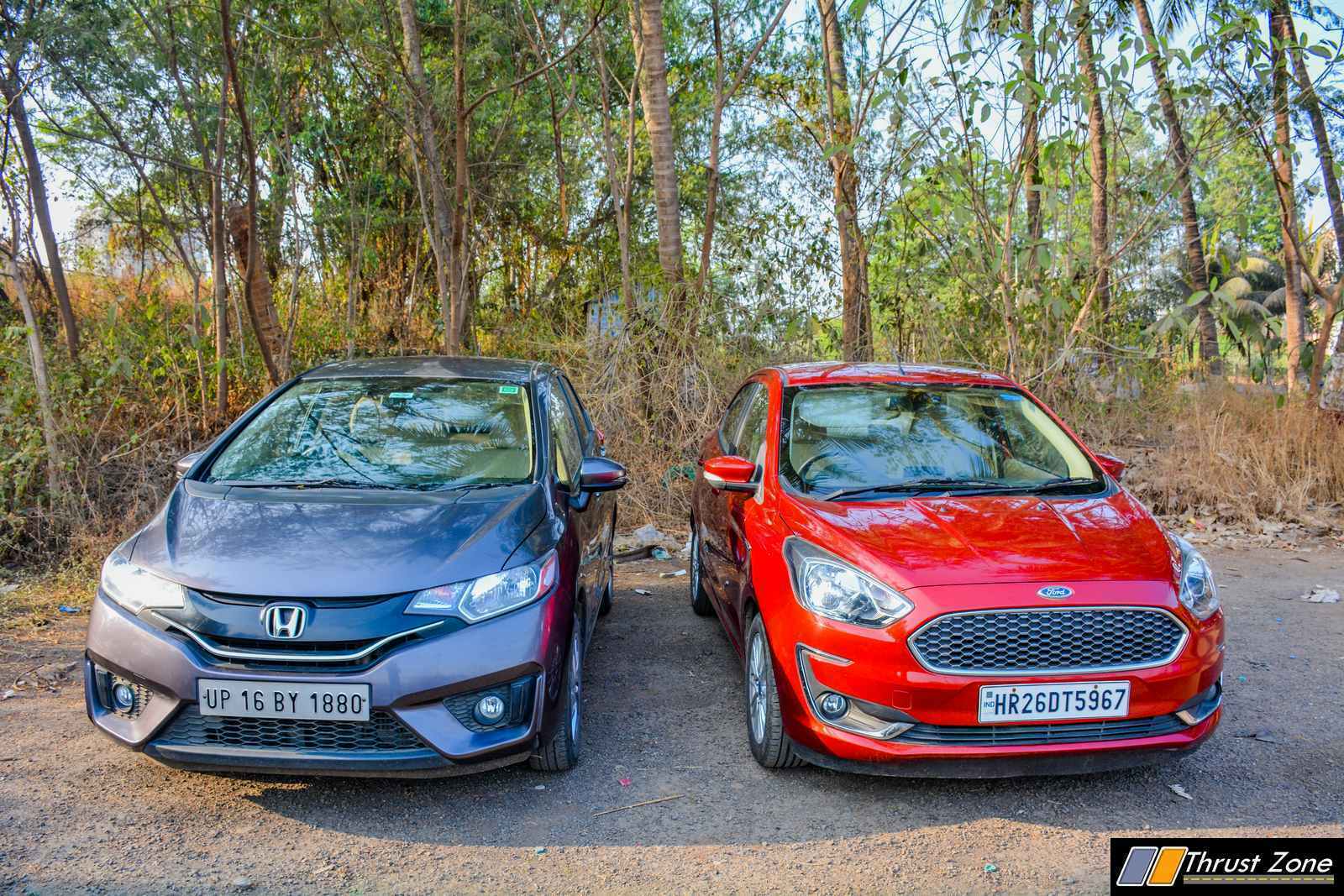 However, the Aspire isn’t far behind when it comes to be roomier as it has a slightly more comfortable seats which the Jazz also excels at rather well. The boot space is what makes confusing for its consumers. 354 litres on the Jazz and 359 litres on the Aspire. This is the place where decisions are made in the favor of the Jazz but then a boot seems more convenient and also, the status co and aspiration of a ‘booted’ car helps Aspire to win this battle. 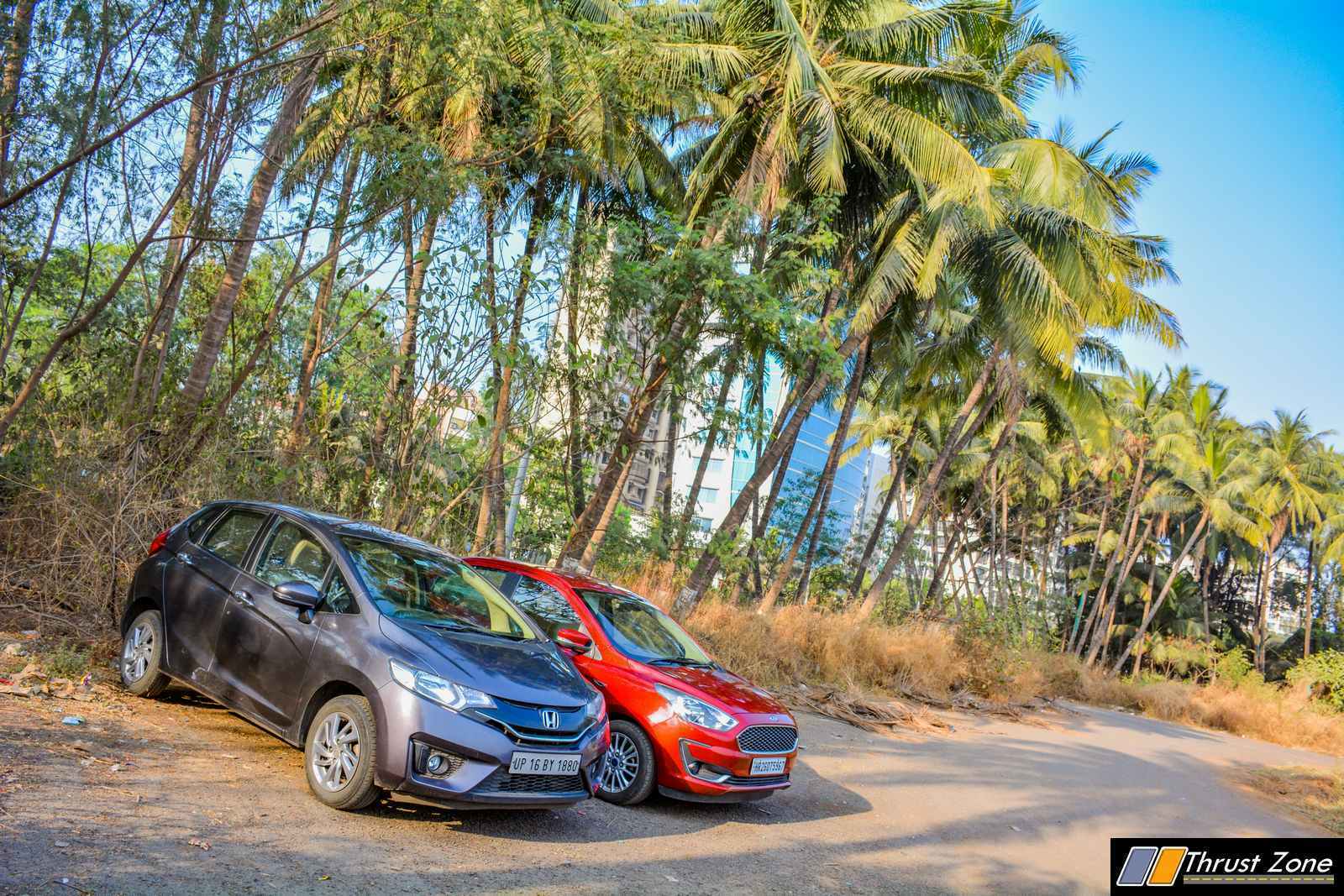 The driving part is also a big confusion for most, let us help you out in the same as we have driven both petrols and diesel of both these cars. The diesel on the Jazz is more fuel efficient at the cost being a bit less free revving and being noisier over the Ford Aspire. The diesel motor in the Aspire feels more playful and is devoid of the Jazz’s negatives making it very nice to enjoy and at the same time efficiency isn’t far away. 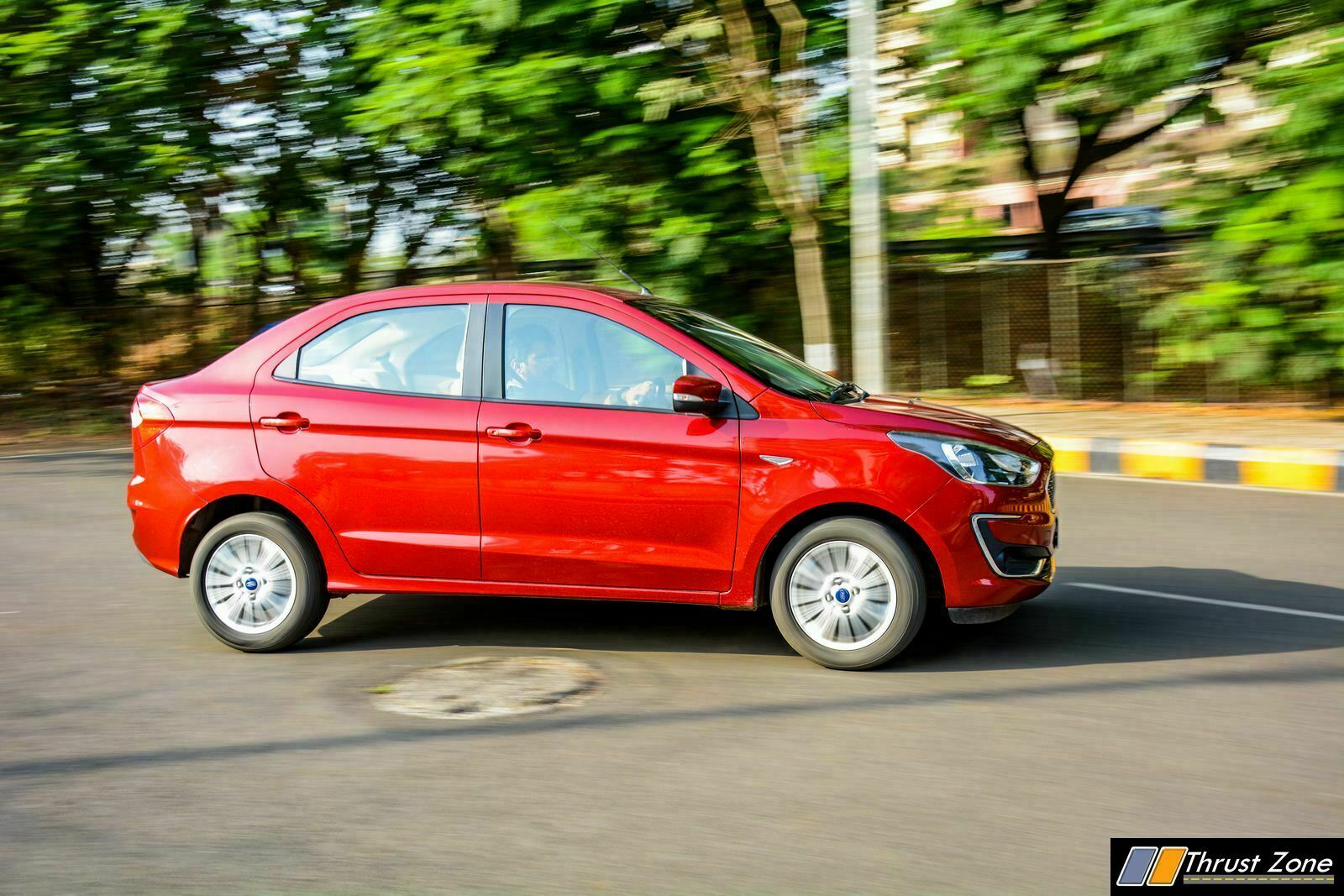 Diesel Aspire can return over 22 km/l in the city and Jazz diesel we had was delivering 23 km/l in the city. 26 km/l was seen on the Aspire diesel on the highway while the Jazz diesel saw 27 km/l in our testing, which is close to the claimed number of the BS4 version too. The gearbox in both cars is a bit notchy in their own ways. The Jazz feels clunky while the Aspire’s gearbox feels much better than before, but it does feel mildly rubbery. They are not close the Maruti’s or Volkswagen slick gear shifters. Jazz feels stressed at higher speeds of 130 km/hr but the Aspire motor is alive at 140-150 km/hr. It is electronically limited to 190 km/hr, which no one has every told you about, but we just did. 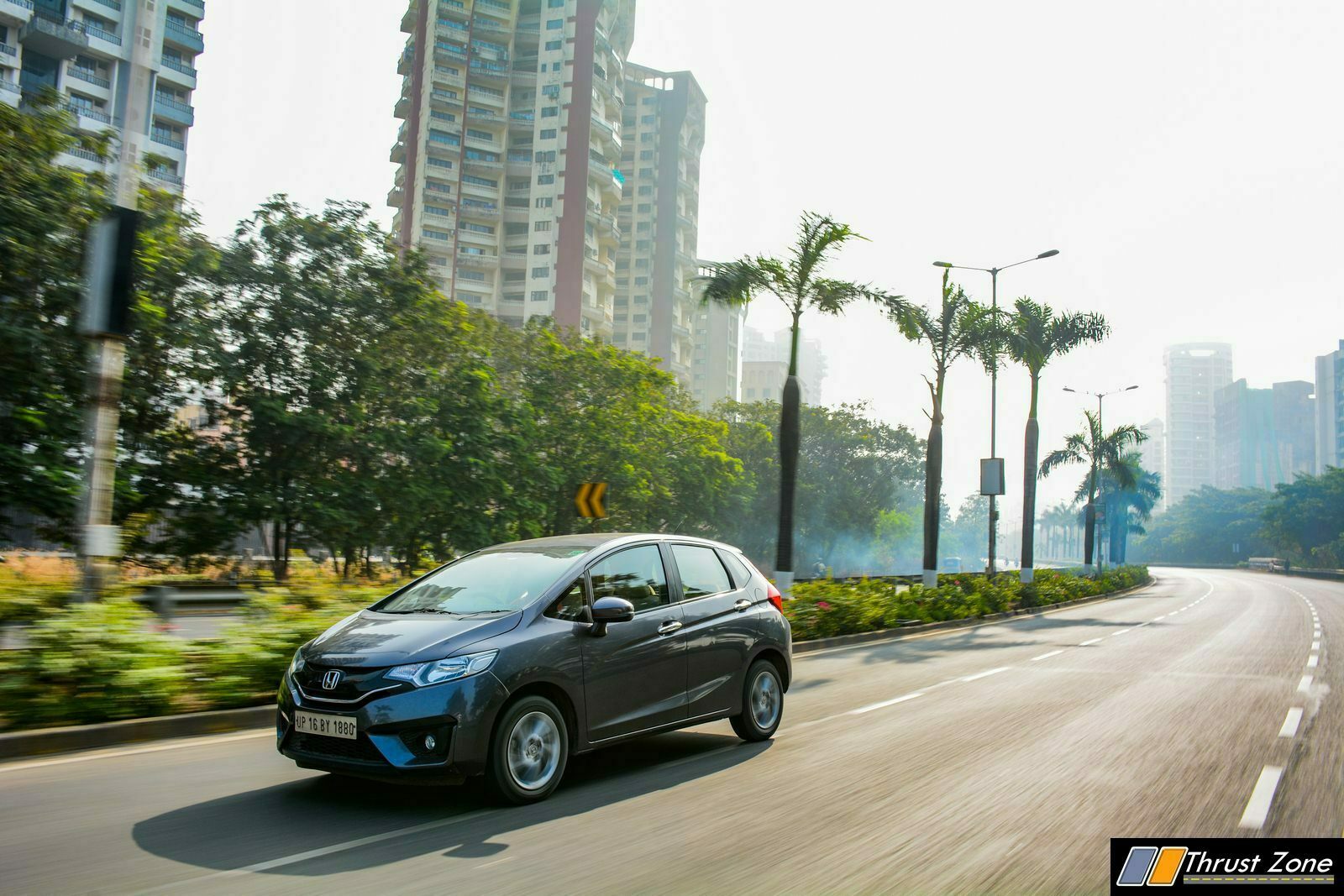 We could just say the petrol motor on the Jazz is a clear winner and finish it right here. However, it is, only in the mid and top-end where it sounds like an F1 engine but with just 1.2 litres of displacement. Low-end is quite poor and dealing with every day is a bit annoying. Fuel economy is good (12 km/l city and 16 km/l highway) if you keep the revs below 4000 RPM in every gear change. Redline it and the motor will scream and shout push the car forward with authority. The chassis is so good that this car deserves an 1.5 petrol motor from the City. 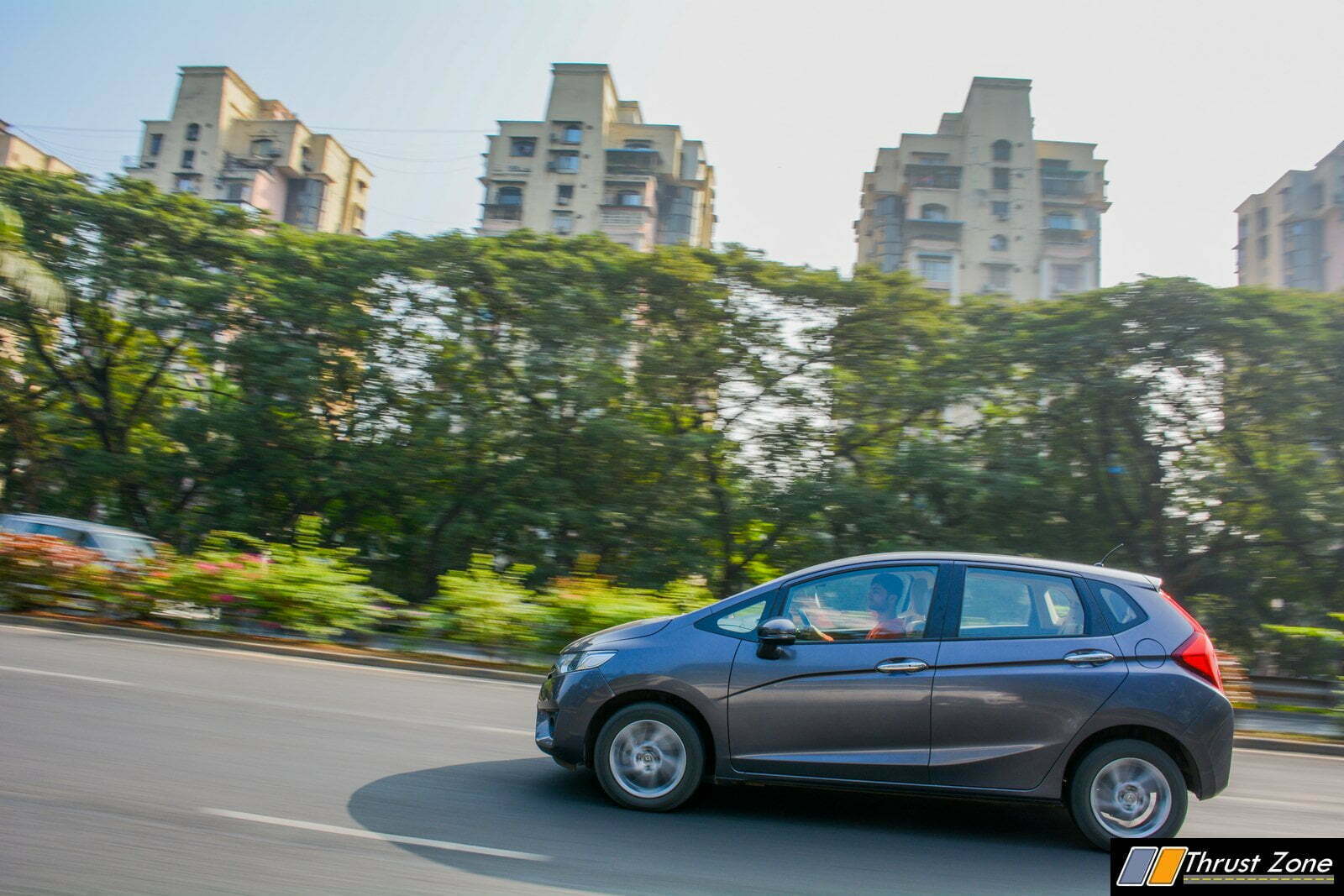 Aspire on the other hand has higher power and torque figures and feels far more easier to live with on a daily basis. However, it is very linear and almost character-less. The refinement though is very high and NVH levels are down right low in the car at any given speed of cruising and driving in the city. Top-end surge isn’t there like the Jazz but it has a enough grunt to keep up on the highway, albeit with almost constant downshifts if you overtake a lot. 6- Speeds are missed on both cars when it comes to petrol. 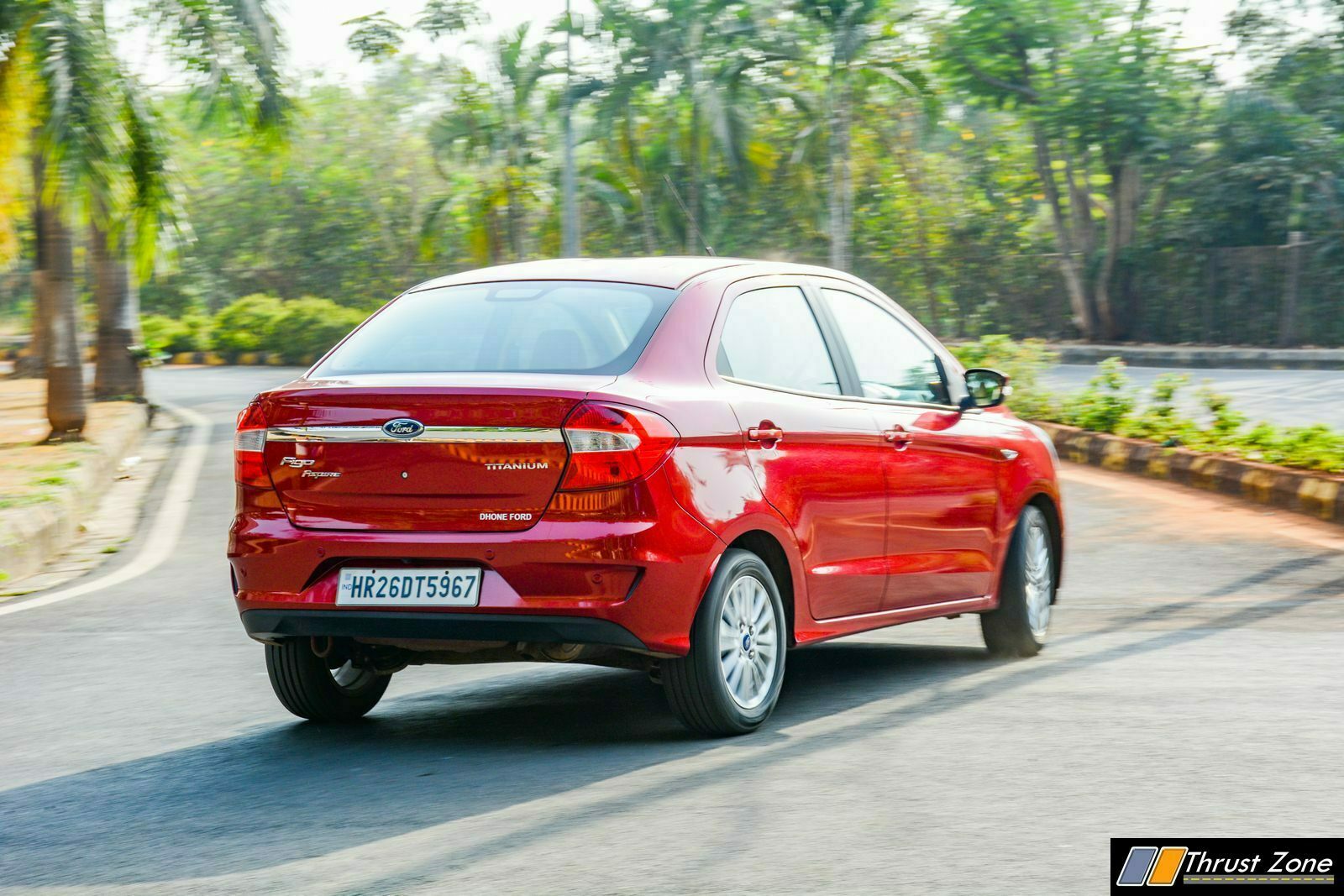 Handling is where both car makers are known for. Jazz grips like a leech and body roll is well contained. The Aspire feels more stable and confident and grip is quite good too. Jazz has a better steering but the Aspire has far better brakes than the Jazz. Ride quality on the Ford is on the comfier side while the Jazz feels a bit more sportier. Both are stable on the highway at both speeds, but a bit more is expected from expected from both brands as they need to inspire more confidence to driver for the same. 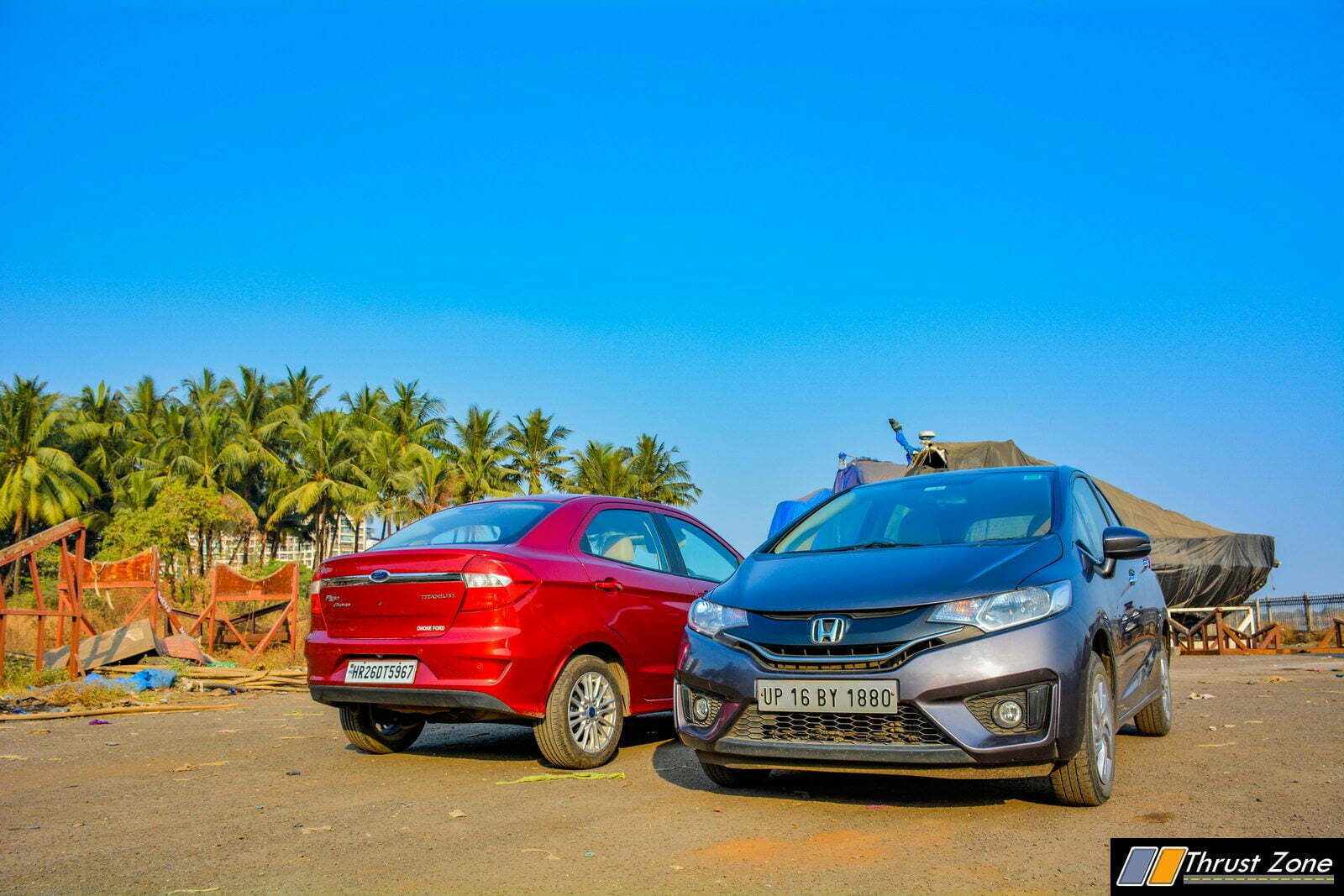 It’s not apple to apples comparison this time around. One is hatch and other one is sedan. The hatch in question here is a bit more conservative in the way it feels but it still offers what the Aspire has to offer, which makes it a true Honda. However, quality could have been better and pricing could be more accessible. Ford corrects all mistakes and is a sedan which does suit all, but sales numbers do not suggest that despite it is a strong player in this comparison and its segment too. 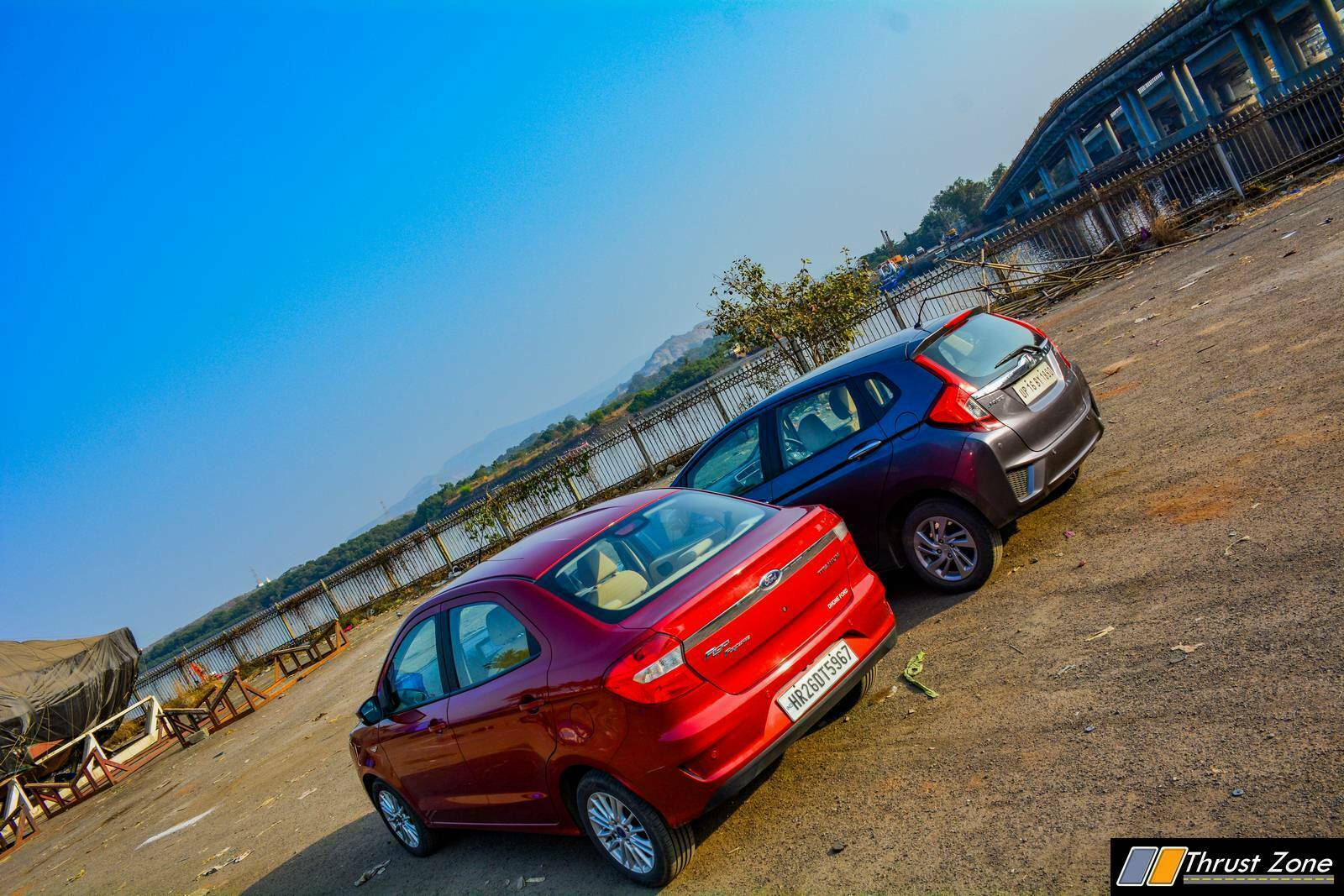 Ford offers good value to begin with as it is value for money to begin with, fuel economical engines and promise of lowest service and maintaining cost. Ford Aspire is the choice for boot loving enthusiasts. While the Jazz continues feels more hip and attracts the younger crowd.