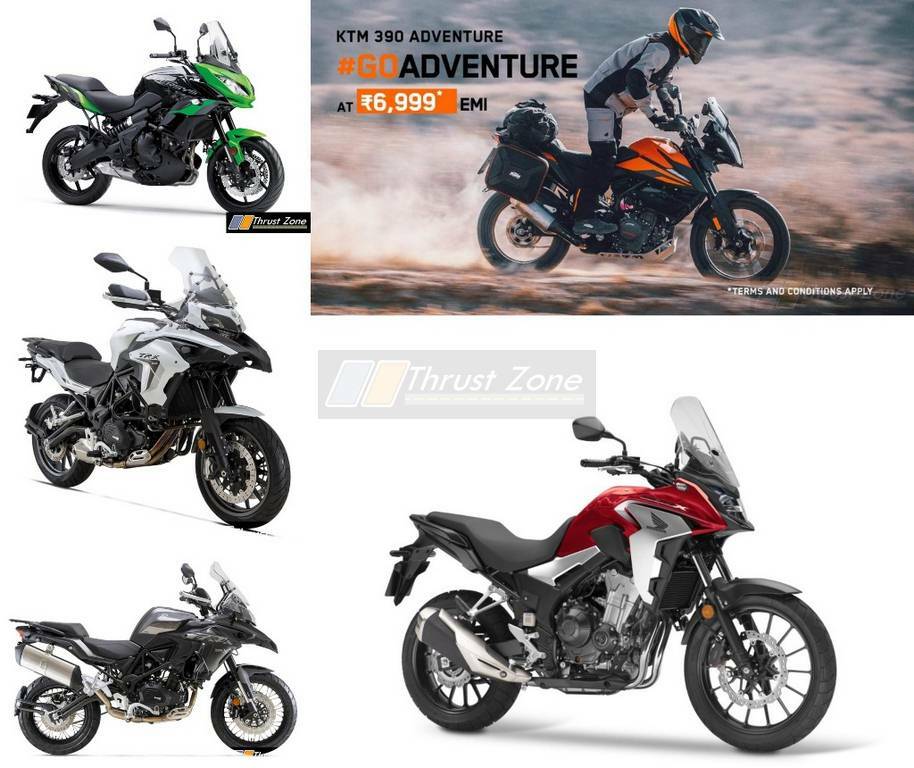 The premium motorcycle space in the Indian market seems to have caught the imagination of buyers lately. Although these bikes are anchored on the pricier side of the cost bracket, they offer substantially superior performance and satiating experience to enthusiasts. In this specification comparison review, we have handpicked four premium bikes that are ruling the roost of the category and pitted them against each other to find which one offers the best package of style and performance at a pocket-friendly price.

Design and Styling
KTM 390 ADV boasts sharp looks which are only accentuated by its rugged demeanour. It features an LED headlamp with a guard that not only looks mean but also save the lighting element from debris during off-roading – a thoughtful design touch. Benelli TRK 502 looks radically different from others in the lot and its high-set fenders are unique elements of its design approach. Kawasaki Versys 650 has more bulk to it and it feels more substantial thanks to the bigger visor, sharp headlamp, and fuel-tank flanks. Honda CB500X, on the other hand, projects a lean image and the bike’s sharp styling goes well with its build-up. Overall, there is a crucial difference in the way these bikes have been put together and their individualities offer a lot of choice to prospective buyers.

Engine and Transmission
The engine capacity of the four bikes in this comparison are quite different. KTM displaces the lowest 373cc capacity engine while the most powerful one with 649cc is at the disposal of Kawasaki. Honda and Benelli, on the other hand, come powered by 472cc and 500cc petrol engines respectively. Except for KTM, all other bikes have a twin-cylinder configuration and unsurprisingly, 390ADV has the lowest power and torque rating. With 64.8bhp and 61Nm, the Versys 650 comes across as the most powerful machine followed by the Honda and Benelli. Fuel injection system, liquid-colling technology, and a 6-speed gearbox are standard across all bikes in the fray. Kawasaki boasts the biggest 21-litre tank which is closely followed by 20-litres of Benelli.

Kawasaki and Benelli have equipped their bikes with an upside-down (USD) front suspension system with 120mm and 160mm wide front and rear tires respectively. Rear monoshock suspension is standard in all bikes although here again Kawasaki and Benelli offer preload adjustability as an extra feature. The Dual-channel ABS system is standard on Kawasaki and Honda while KTM and Benelli offer a switchable ABS feature as a part of the package. For superior stopping capabilities, all four bikes have got both front and rear disc arrangement as a part of the standard fitment.

Dimensions
Benelli TRK 502 is the longest bike (2200mm) here and comes with a wheelbase of 1505mm – again the longest in this comparison. It is also the widest (915mm) and tallest (1450mm) bike though on ground clearance KTM 390 ADV leads the tally with its belly 200mm off the ground. Surprisingly, the seat height of Benelli is the lowest which means short riders won’t face much trouble while riding the bike.

Features
KTM is well equipped in terms of features as it is only bike in the comparison which offers mobile connectivity, GPS and navigation, and a side stand alarm. All bikes have got a digital tachometer except for Kawasaki Versys 650 which has decided to go ahead with analogue arrangement. Unlike others, Honda hasn’t opted for a stepped-seat in CB500X although the bike is kitted fairly well. Digital Fuel Gauge, electric-start, kill switch and clock are some prominent features that are standard in all four bikes here. 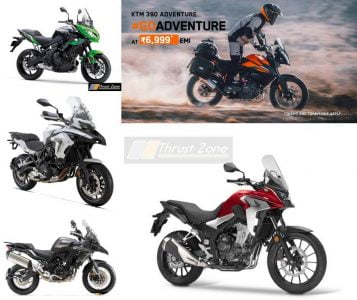 Value for Money
There is no comparison when it comes to the price as all four contenders are targeting different segments with their specific approaches. KTM 390 ADV is the least costly proposition here with a price tag of Rs 3.10 lakh. Kawasaki Versys 650, on the other hand, sits on the pricier end with a tag of Rs 6.94 lakh although Honda CB500X is not far behind with an asking price of Rs 6.87 lakh. The second-best option after KTM on value for money is Benelli TRK 502 which is available at Rs 4.89 lakh (all prices, ex-showroom Delhi).