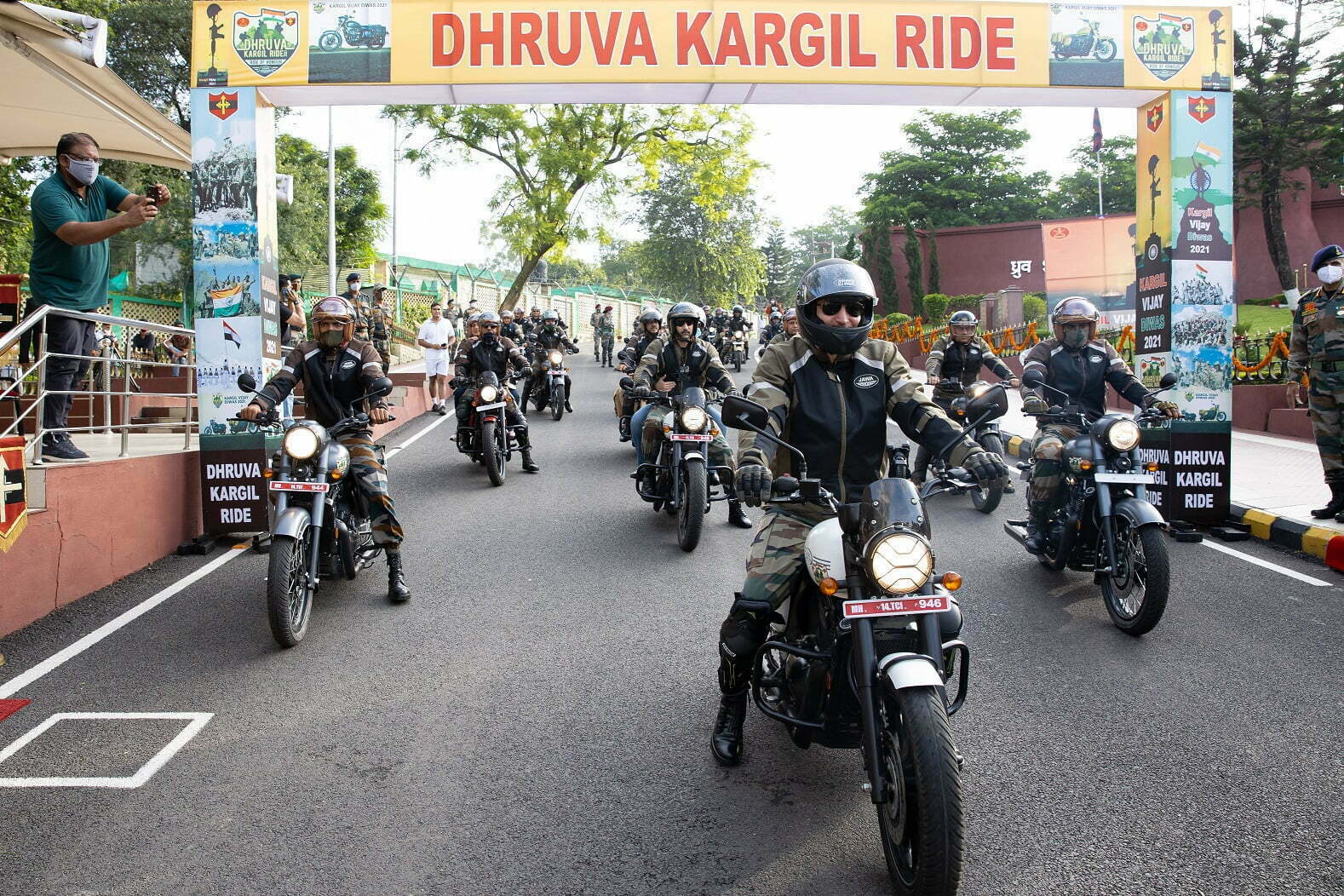 Shortly after the launch of Khakhi and Midnight Grey colours of its Jawa model as a tribute to the 50 years of 1971 war victory, Classic Legends has commenced a series of celebratory rides in association with the Indian Army. The ‘Dhruva Kargil Ride’ (#DhruvaKargilRide)is the first in this series and celebrates the 22nd ‘Kargil Vijay Diwas’ as well as the 75th year of Indian independence.

The Dhruva Kargil Ride saw a total of 75 Jawa motorcycles led by the new Khakhi and Midnight Grey colours leading the pack with riders from the Indian Army, spread across four groups. The main ride was flagged-off from Dhruva War Memorial by Subedar Sanjay Kumar, PVC under the aegis of Headquarter Northern Command in Udhampur, comprising of 25 riders on Jawa motorcyclesled by Lt. General YK Joshi, (UYSM, AVSM, VrC, SM, ADC) GOC-in-C, Northern Command, who rode all the way up to the finishing point at Kargil War Memorial in Drass.

Alongside this main ride, subsidiary rides were flagged off from Naushera, Srinagar and Karakoram Pass completing a count of 75 motorcycles to mark 75 years of India’sIndependence. All four groups converged at Kargil War Memorial, Drass to further participate in the Kargil Vijay Diwas 2021 on July 26th.

Commenting on this association, Lt. General YK Joshi said, “The sacrifices made by the soldiers of Indian Army are not only remembered but also recognised to inspire the current and the future generations. Therefore, this effort of ours, the Dhruva Kargil Ride, is to remember the fallen heroes during Operation Vijay and also to revive, rekindle and reinvigorate the spirit of patriotism amongst the youth.We are excited that Jawa Motorcycles has come forward to partner with us on this ride and this gesture adds to the enthusiasm of the participating riders. We also recognise the efforts of the company under its Forever Heroes initiative towards the welfare of armed forces personnel.”

Mr. Ashish Singh Joshi, CEO, Classic Legends said, “It is a proud moment for us as our recently launched Jawa Khakhi and Midnight Grey motorcycles, which proudly bear the Indian Army insignia, are ridden to Kargil by the brave men and women of the Indian Army to celebrate the 22nd Kargil Vijay Diwas. Following the various activities under our Forever Heroes initiative, this is another step towards strengthening our association with the Indian Army and marks the beginning of a series of celebratory rides that we plan to do this year to celebrate the 50th anniversary of the 1971 war victory. Our soldiers are our true heroes and respecting their efforts in keeping our country safe is a way of life at Jawa Motorcycles.” 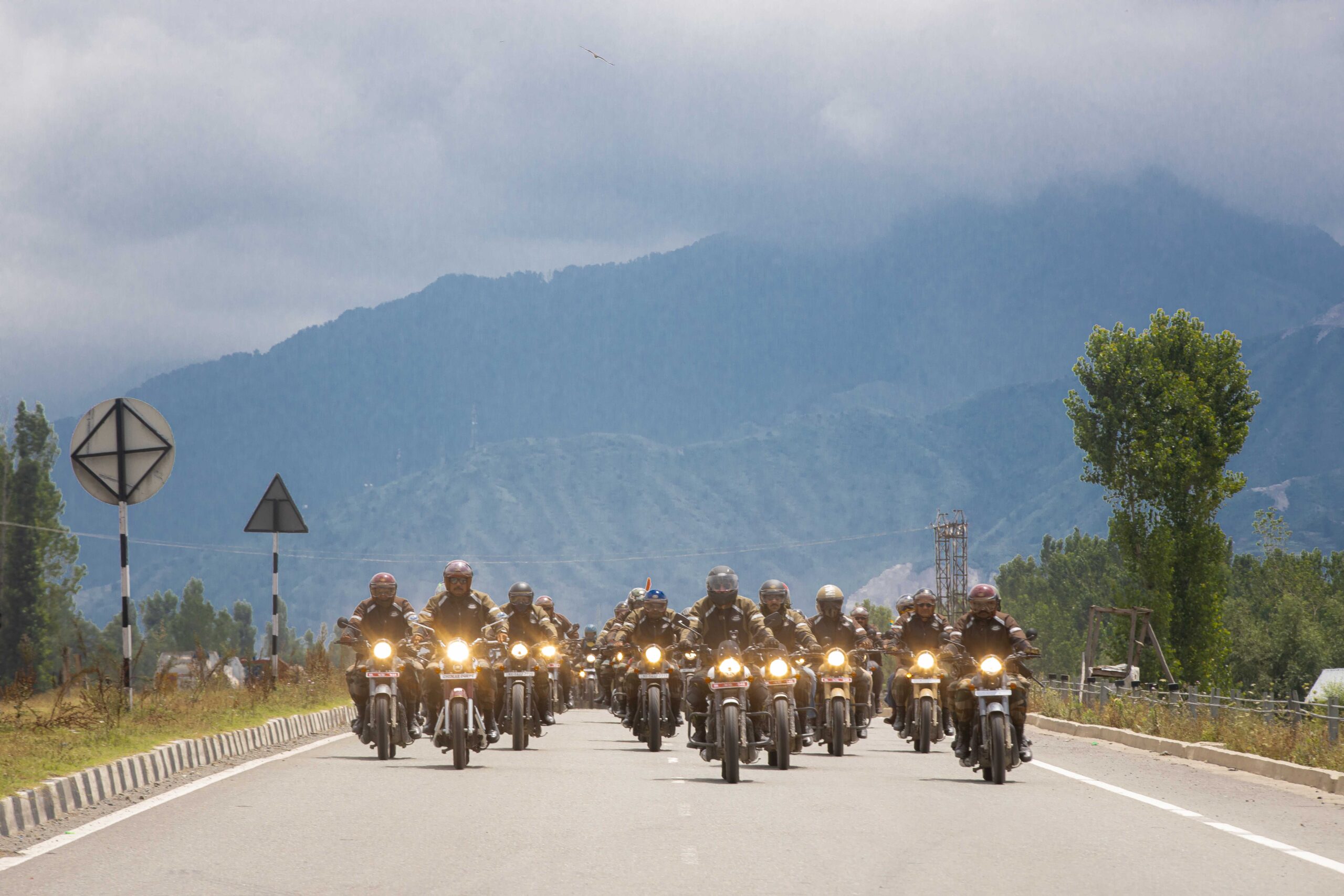 This ride marks JawaMotorcycles’ second initiative to the ‘Swarnim Vijay Varsh’ celebrations along the year. To offer a tribute to the 50th Anniversary of the 1971 war victory, Jawa Motorcycles recently launched two new colours – Jawa Khakhi and Midnight Grey that honour the spirit of bravery, service and sacrifice of the Indian Army. The colours resonate with the spirit of the army and what also makes these motorcycles truly unique is the commemorative emblem that proudly features the prestigious Indian Army insignia flanked by a ‘laurel wreath’ symbolizing the 1971 victory.

The #ForeverHeroes initiative was conceived by Classic Legends to inculcate a sense of gratitude towards the Armed Forces. Right from its early phase, the company has been developing a culture of values to appreciate of their efforts and sacrifice that helps keep the country safe, peaceful & prosperous. In 2019, the company formally announced this initiative to contribute to the cause of welfare of Armed Forces personnel and their next of kin. The key happenings under this initiative are –

● Classic Legends raised a sum of INR 1.49 crore by auctioning 13 motorcycles from its first batch of production motorcycles, contributing the proceeds of the auction to Armed Forces Flag Day Fund. The handover was done by Classic Legends to Kendriya Sainik Board, Ministry of Defence (Government of India) at a joint ceremony in the presence of eminent armed forces veterans, war heroes and officers.
● Contribution towards building of a Community Hall at the Leh’s War Hero Colony where Veer Naaris (widows of war heroes) reside with their children. War Heroes of the Ladakh Scouts regiment who fought in the Kargil War
● Supporting Indian Navy with motorcycles, services support and gear for their ‘Seven Sisters Ride’ across the North East India, done with the intention of highlighting Navy as a glorious career option among the youth in the region
● Supporting the Indian Air Force with a fleet of motorcycles and service support for their ride along the bases in South India
● Erecting the ‘Border Man’ statue at Wagah Border as a tribute to the BSF personnel, signifying their spirit of bravery, dedication and sacrifice
● As a part of Swarnim Vijay Varsh celebrations this year, Jawa Motorcycles will also be making a contribution to the Armed Forces Flag Day Fund for the welfare of Army personnel

of its employees & customers through its network and other suitable occasions with the armed forces personnel to help build regard & respect for their contribution to the country. As a part of this, the company delivered the first few motorcycles to its customers by the hands of veterans, ex-servicemen and serving officers