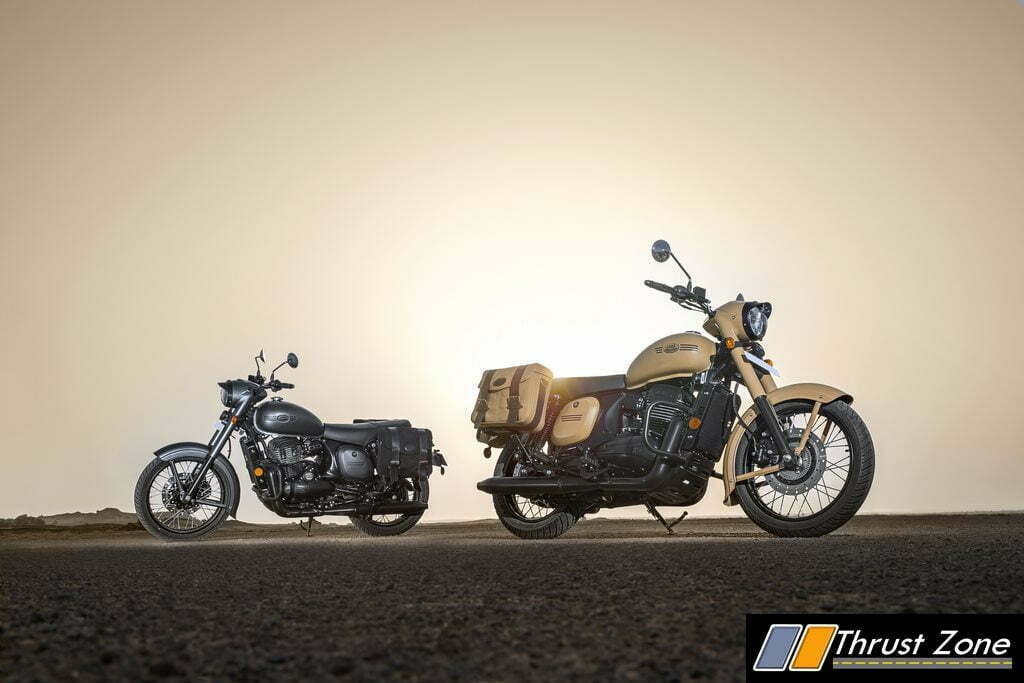 It is not just a number or a year on the calendar. 1971 signifies a glorious milestone, decorated with the bravery and valour of our armed forces leading to one of the most remarkable victories in the history of India as a nation. This year marks the 50th anniversary of the 1971 war victory and Jawa Motorcycles has come to the fore to offer a tribute to the gallantry of our Forever Heroes. Continuing its #ForeverHeroes initiative, the brand has introduced two new colours of its modern classic Jawa to commemorate the 50th Anniversary of the 1971 war victory. To further contribute to the ‘Swarnim Vijay Varsh’ celebrations along the year, Jawa Motorcycles will be a part of various celebratory rides with the Indian Army that mark important landmark occasions like Kargil Vijay Diwas, Battle of Turtuk and Battle of Longewala, with the Jawa Khakhi and Midnight Grey leading the charge.

What makes these motorcycles special is the commemorative emblem that proudly features the prestigious Indian Army insignia flanked by a ‘laurel wreath’ symbolizing the 1971 victory. Jawa Motorcycles is honoured to be the first manufacturer to be allowed to do so on a production motorcycle. Born in tribute and steeped in bravery, the two new colours honour the spirit of bravery, service and sacrifice of the Indian Army, and embody the spirit of the brave and the bold. The Jawa Khakhi signifies the spirit of selfless service to the nation by the men in uniform.

The Jawa Midnight Grey, on the other hand, is inspired by the Battle of Longewala, fought in the western frontier along Rajasthan border. This battle played an important role in India’s victory in the ’71 war where brave soldiers from Indian Army and BSF thwarted the enemy attack and defended our motherland, fighting bravely through the night. Jawa Midnight Grey is an ode to the bravery of these soldiers and the victory that we achieved on this night. The Jawa Khakhi & Midnight Grey will be available across Jawa Dealerships and will be priced at INR 1,93,357 ex-showroom, Delhi. 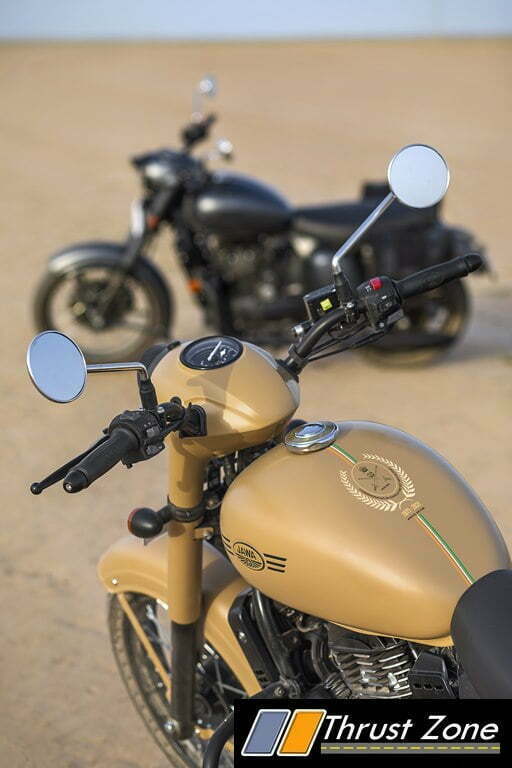 Picking up from the suave styling of the Jawa, the new Jawa Khakhi and Midnight Grey add a dark sophistication and a more outdoorsy feel to the Jawa character. Both shades are finished in matte and feature an all-black theme that runs across the mechanical parts of the motorcycle. The engine now features brushed fins adding to the attention to detail. The 1971 War Victory commemorative insignia occupies the place of pride on the fuel tank flanked by tricolour stripes. The wheel and tyre sizes remain unchanged from before but these motorcycles ride on blacked out spoke rims to go with the overall black theme. All the product enhancements introduced across the Jawa Motorcycles range, beginning with the introduction of forty two sports stripe earlier this year, also find way into these motorcycles.

Enhanced seat; that further elevates the rider comfort with its redesigned seat pan and cushioning
Retuned suspension & frame set-up; that results in better ground clearance while adding to the already superlative ride and handling characteristics of the Jawa
Retuned exhaust note coming out of the signature twin exhausts; deeper beat and tuned acoustics for a more engaging riding experience
Trip meter for rider convenience

The new colours will only be available in the Dual ABS version, which means the braking retains its best in class capabilities and the ABS module developed by Continental adds to the superior confidence that the motorcycle’s handling prowess inspires.

The 293cc liquid cooled and fuel injected engine gets further enhancements to deliver 27.33 PS of power and 27.02 Nm of torque. The engine is mated to a six-speed transmission.
It’s the first single cylinder engine to utilize cross port technology which increases the volumetric efficiency of the engine, enables a better flow of charge and exhaust gases and results in better power and torque output. The engine now features a repositioned lambda sensor that monitors internal and external variables even more efficiently to give a consistent performance and cleaner emissions regardless of any road condition. The throttle response has been made crisper to respond to even the slightest inputs with precision through improved fuelling. The overall result is a more linear performance across the rev range, with a noticeable punch in the mid-range resulting in stronger acceleration.

The #ForeverHeroes initiative was conceived by Classic Legends to inculcate a sense of gratitude towards the Armed Forces. Right from its early phase, the company has been developing a culture of values to appreciate of their efforts and sacrifice that helps keep the country safe, peaceful & prosperous. In 2019, the company formally announced this initiative to contribute to the cause of welfare of Armed Forces personnel and their next of kin. The key happenings under this initiative are – 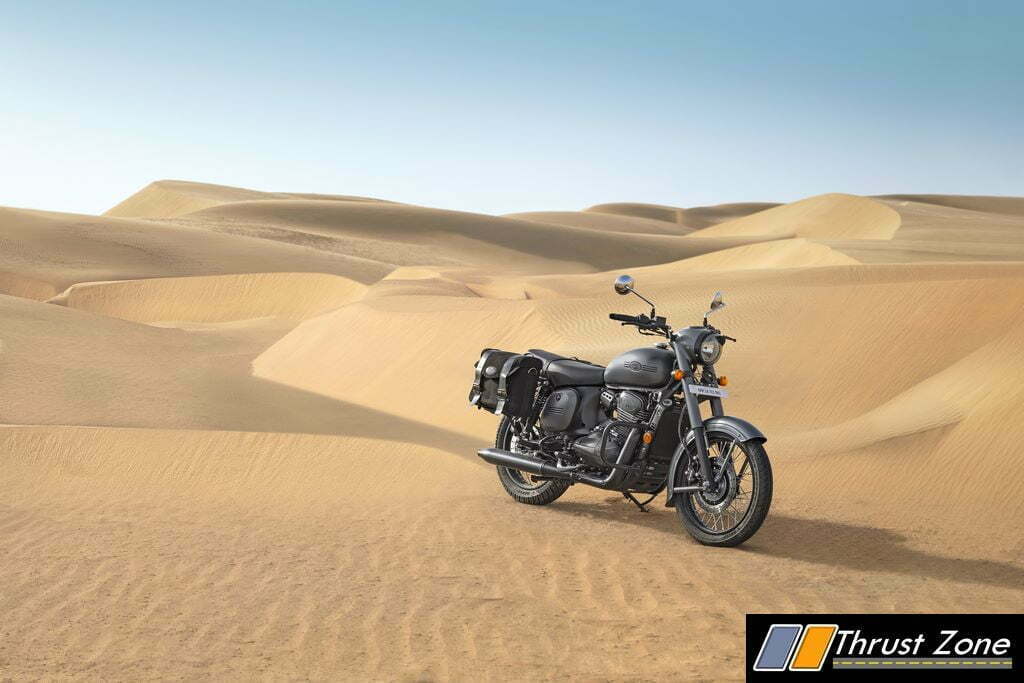 Classic Legends raised a sum of INR 1.49 crore by auctioning 13 motorcycles from its first batch of production motorcycles, contributing the proceeds of the auction to Armed Forces Flag Day Fund. The handover was done by Classic Legends to Kendriya Sainik Board, Ministry of Defence (Government of India) at a joint ceremony in the presence of eminent armed forces veterans, war heroes and officers.

Contribution towards building of a Community Hall at the Leh’s War Hero Colony where Veer Naaris (widows of war heroes) reside with their children. War Heroes of the Ladakh Scouts regiment who fought in the Kargil War

Supporting Indian Navy with motorcycles, services support and gear for their ‘Seven Sisters Ride’ across the North East India, done with the intention of highlighting Navy as a glorious career option among the youth in the region

Supporting the Indian Air Force with a fleet of motorcycles and service support for their ride along the bases in South India
Erecting the ‘Border Man’ statue at Wagah Border as a tribute to the BSF personnel, signifying their spirit of bravery, dedication and sacrifice
As a part of Swarnim Vijay Varsh celebrations this year, Jawa Motorcycles will also be making a contribution to the Armed Forces Flag Day Fund for the welfare of Army personnel

In its day to day functioning, the company also looks forward to facilitate interactions of its employees & customers through its network and other suitable occasions with the armed forces personnel to help build regard & respect for their contribution to the country. As a part of this, the company delivered the first few motorcycles to its customers by the hands of veterans, ex-servicemen and serving officers.

All New BMW CE 04 Electric Scooter Is Ready For The Future!