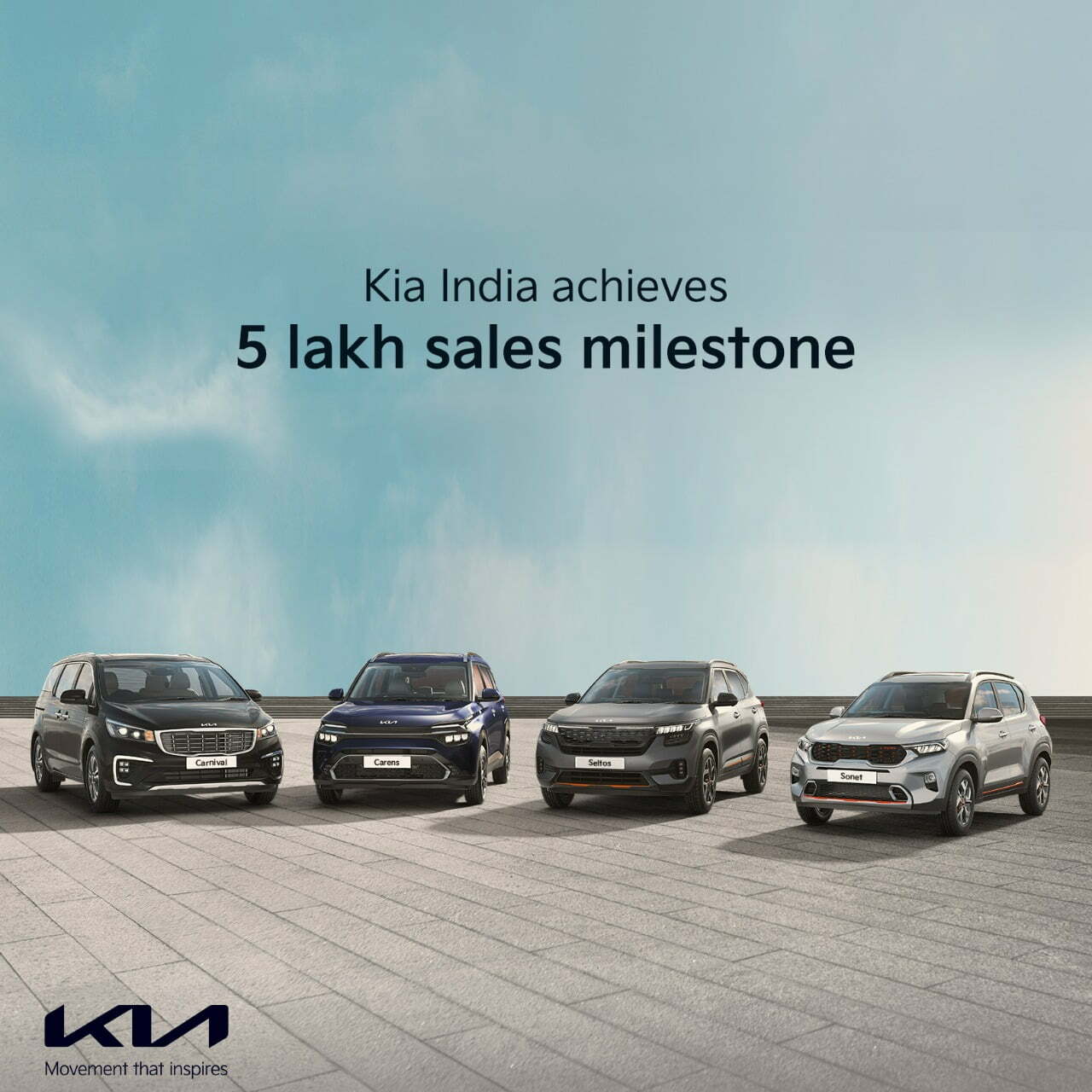 Kia India, one of the fastest growing car makers in the country, sets another benchmark, surpassing the 5,00,000 domestic sales milestone in just under 3 operational years, making it the quickest carmaker in India to achieve the feat. Including exports, Kia India’s cumulative dispatches soar to 6,34,224 units from its Anantapur manufacturing facility. Backed by the strong performance of Carens, the company secured its last 1 lakh sales in just 4.5 months. With its strong performance in the Indian market, the company now contributes more than 6% to the global sales of Kia Corporation.

Kia India’s flagship model for India, the Seltos, continues to lead the company’s overall sales. The model adds 59% to Kia India’s total tally, followed by the Sonet with more than 32%. Climbing the chart rapidly, Carens has contributed close to 6.5% to the company’s domestic sales in just 5 months of its launch. Coming to the segment Kia operates in, The Seltos maintains its stronghold in the Mid-SUV segment, contributing more than 40% to the sales of vehicles in its category. While the Sonet continues its healthy run in the compact SUV segment with a 15% share, The Carens is climbing the chart with more than 18% contribution to its segment. Notably, in CY 22, the Carens has become the second most selling vehicle in its category. The Carnival, too, maintains its robust sales trend, selling almost 400 vehicles on average every month.

Commenting on the achievement, Myung-Sik Sohn – Chief Sales Officer, Kia India, said, “In the short 3 years in India, we have not only established ourselves as the trend leading and inspiring brand but have also led the adoption of new technologies. I would like to attribute Kia India’s success to everyone who is and has been a part of the ecosystem. Most importantly, I would like to extend my deepest gratitude towards our customers who have kept their trust in the brand even in adverse situations like the global supply chain issues. I proudly say today that we have earned a space in the hearts of Indian consumers, and that’s our biggest achievement.”

He further added, “India remains a priority market for India, and hence our 3 out of 5 product offerings in the country are not only manufactured locally but exported to different global markets as well. Recently, we have brought to life our vision of becoming a ‘Sustainable Mobility Solutions Provider’ brand in India with the launch of EV6 and installing the fastest passenger vehicle charger of 150kWh. Due to our focussed approach, we now contribute more than 6% to Kia’s global sales. India is a country with immense potential, and we aim to continue contributing to the growth of manufacturing in India by continuously bringing in our world-class products and technologies.”

Kia has become a well-known name across India, and the region-wise healthy sales contribution testifies the claim. The growing accessibility of the brand in the country ensures a progressive sale of KIN’s vehicles across regions in the country. The brand intends to grow its touchpoints from 339 to 400 across 225 cities by the end of CY2022.

The CY 2022 has been Kia India’s most successful year so far as it has already sold almost 70% of the last year’s sales. Furthermore, with almost 2.5 lakh connected car sales and a 97% activation rate, Kia India has emerged as a popular choice among tech-savvy customers

ZF Ready To Deploy Ride By Wire Technology For All Major Car Components!