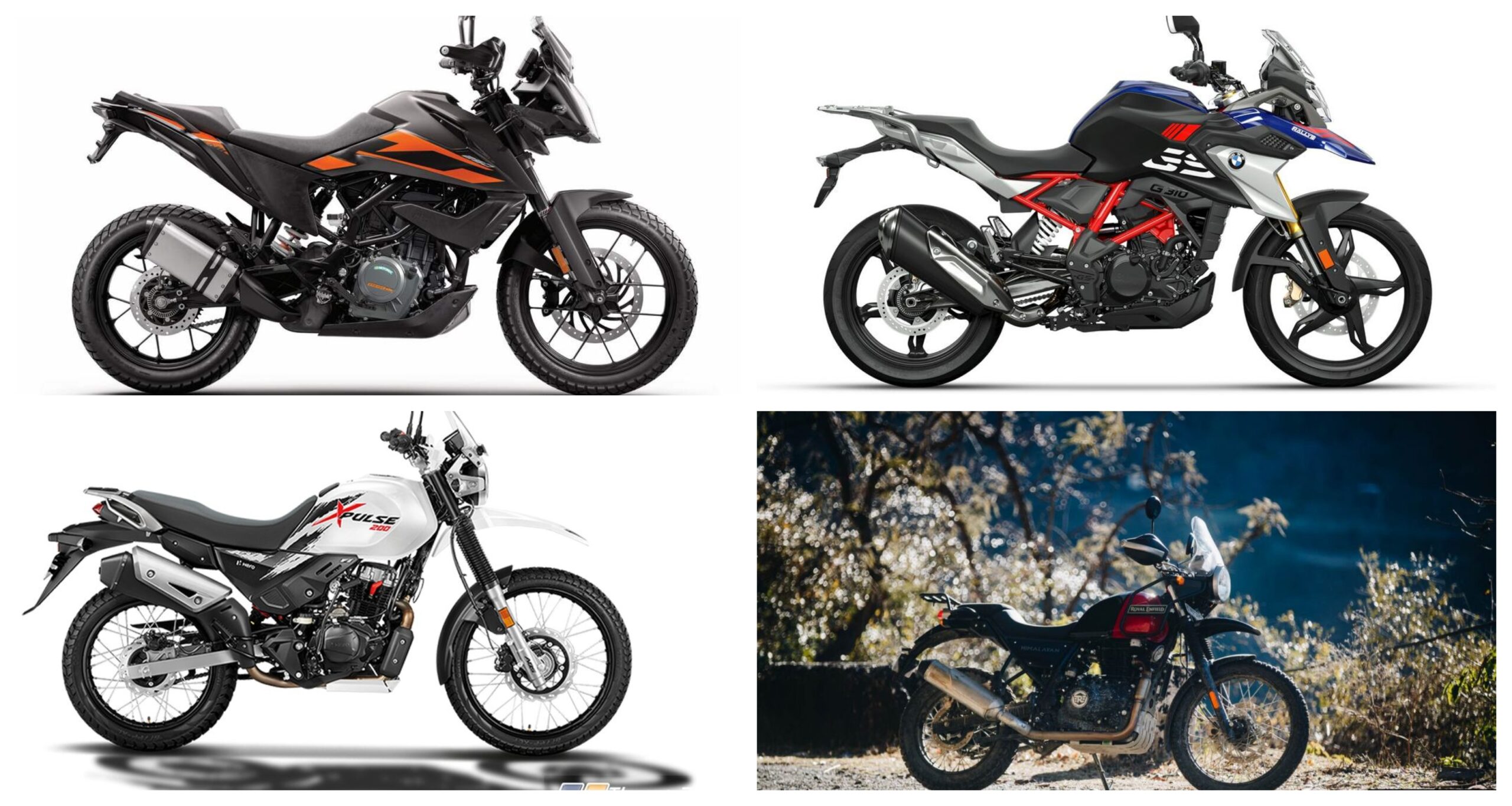 The segment of adventure (ADV) bikes is slowly and steadily gaining momentum among prospective buyers. According to the latest rumblings, KTM is readying to launch its second ADV offering, 250 Adventure in the market. On its arrival, KTM 250 Adventure will take on the likes of Royal Enfield Himalayan, Hero XPulse 200, and BMW G 310 GS. We pit all the contenders against each other in this specification comparison review to find out which one you should bet your money on.

Design and Style
It can be safely assumed from the spied pictures of the upcoming 250 Adventure that it draws on its bigger sibling 390 Adventure for design inspiration. All the characteristic traits of 390 Adventure such as sharp styling, alloy wheels, tall stance, and flashy orange paint are amply visible on 250 Adventure.
The turnout of the alloys on BMW is far more impressive than on the KTM. G 310 GS also features sharp fairings and visually the bike feels more pronounced in its appearance. RE and Hero, on the other hand, have adopted a very practical approach while designing their bikes. A lot of utilitarian stuff such as tall mudguards, large windscreen, and round headlamps are really useful in off-roading have received appreciation from enthusiasts.

Features Front
250 Adventure is expected to feature smartphone connectivity, an adjustable suspension system, and Supermoto ABS mode – just like the 390 Adventure. Himalayan also comes equipped with an adjustable ABS system; however, both KTM and RE bikes miss on the LED headlamp feature. Hero and BMW, on the contrary, feature LED headlamp though on their part, they miss out on the reassurance of a switchable ABS system. Further, XPulse 200 disappoints with its deletion of the dual-channel ABS system. BMW’s adjustable levers and ride-by-wire technologies are nice additions to the list of equipment. Both BMW and KTM also offers sporty USD suspension to further their premium appeal.

Riding Ergonomics
All bikes in this comparison come with an upright riding posture which coupled with the center footpegs, make for a comfortable riding position. There is a split seat set-up in RE and KTM while Hero and BMW have got a single seat arrangement.

ADVs are characterized by tall seats and all four contenders here follow the tradition. In terms of comparison, RE comes with 800 mm seat height and word has it that the upcoming KTM will feature a rather highish 855 mm height. This might create an issue for average or small height riders. Also, the rumored small ground clearance of KTM at 200 mm is not a very inspiring number for hardcore off-roaders.

Performance Credentials
Hero XPulse 200 has the smallest capacity engine with a 199.8cc on tap and accordingly, it makes the lowest 17.8 bhp and 16.45 Nm among all four contenders. Next in the capacity ladder is the 250 Adventure with a 248.8cc engine putting out 29.58 bhp and 24 Nm. BMW G 310 GS has got 32.54 bhp and 28 Nm thanks to the larger 313 cc motor though topping the list is the RE which employs the largest 411cc motor churning highest 32 Nm torque and 25 bhp (less than BMW’s power output). All engines here feature a single-cylinder arrangement and meet the latest BS6 emission norms.

In terms of the gearbox, RE and Hero come with a 5-speed transmission though BMW and upcoming KTM have used a 6-speed unit to channelize the power to the wheels. We expect 250 Adventure to be more fuel-efficient than BMW though it could lag behind RE and Hero in mileage.

Taking a leaf out of 390 Adventure’s pricing, we see the KTM priced at 250 Adventure around Rs 2.49 lakh (ex-showroom). KTM does undercut the prices of G 310 GS though it would still be pricier than the Himalayan. Undoubtedly 250 Adventure makes a solid case for itself given its hardware and capability over its rivals while the Himalayan and Xpulse would be great for people who are just entering the motorcycle world and want off-road based instead of pure road-biased motorcycles.

1.5 Lakh Tata Nexon Roll Out Of The Factory – Segment Best Safety and Dynamics

Supercar GST Prices Have Gone Down By Crores! You Still Need To Save For Decades…