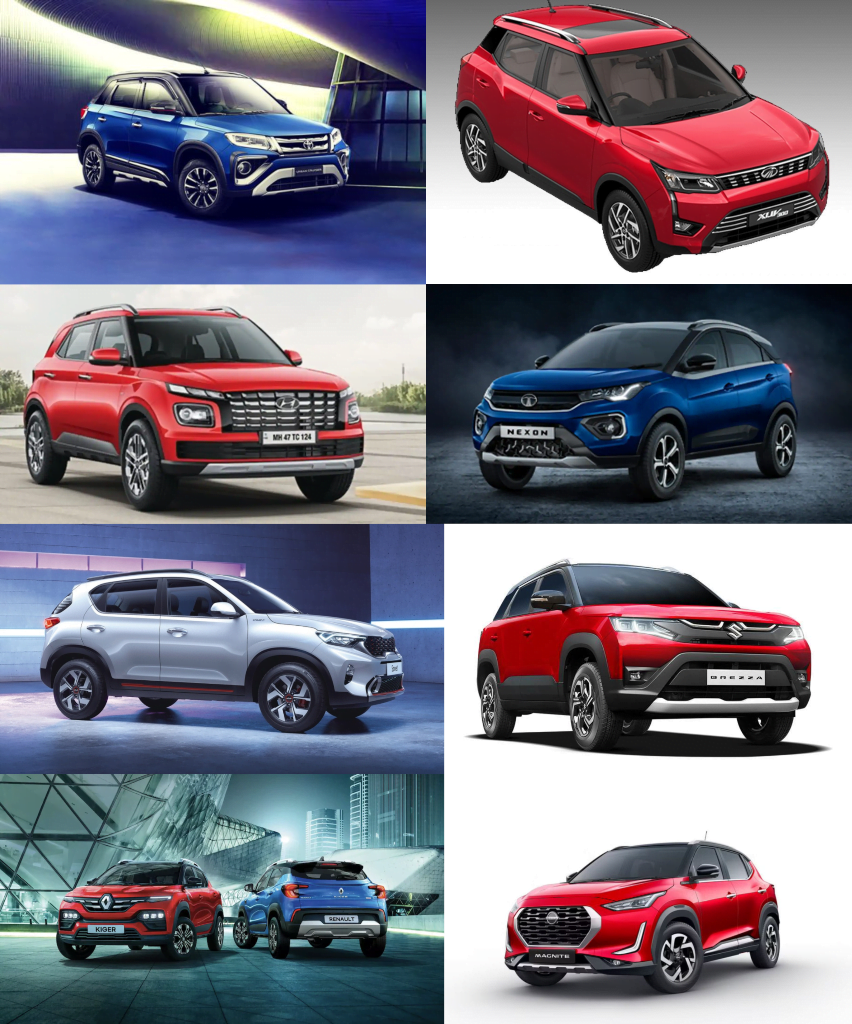 The launch of the new Maruti Suzuki Brezza has further intensified the competition in the segment which is already filled with a number of formidable contenders. In this specification review, we pit the new Brezza to find out where the new model of India’s favorite compact SUV stands against its rivals in its newest avatar.

Dimensions
There hasn’t been any change in the length, width, and wheelbase of the new Brezza although the height has witnessed a marginal increase of 45mm owing to the incorporation of a new shark fin antenna. The length of the new Maruti is at par with most of the other contenders in this comparison but when it comes to the cabin width, it stacks somewhere in the middle. However, Maruti Brezza is the tallest SUV here but when it comes to the crucial aspect of wheelbase, Mahindra XUV 300 features the maximum distance between the center of wheels which helps it get a bigger wheelbase. Brezza’s 328-liter boot is one of the critical chinks in its armor although it has one of the largest 48-liter capacity fuel tanks. 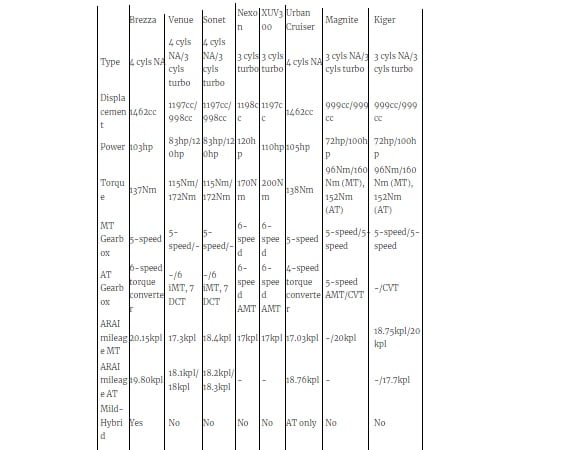 Engines and Transmission
With a 1.5-litre Capacity, Maruti Brezza and Toyota Urban Cruiser are the most powerful SUVs in the naturally aspirated category of engines here. There are turbocharged petrol engines featured by a number of SUVs in the comparison and as a result, these SUVs put out more robust performance than Maruti and Toyota.

In terms of Transmission options, Maruti and Toyota are the only ones featuring torque converter units, in addition, to having a 5-speed manual gearbox. Other SUVs come with CVT, AMT, iMT, and technically sophisticated DCT gearboxes coupled to their naturally aspirated and turbocharged engines.

One critical area where the Maruti Brezza scores significantly higher than other models is fuel efficiency. Thanks to its mild hybrid technology, the Brezza comes across as the most fuel-efficient SUV in this comparison and this aspect is definitely going to aid its popularity for there among prospective buyers.

Prices
Maruti has considerably hiked the prices of Brezza as its top variant ZXi+AT now commands a premium of Rs 2.5 lakh over the same variant of the outgoing model. Maruti Brezza is the costliest model when it comes to the top-spec variant among the SUVs in this comparison. In fact, the price of the top-spec automatic Brezza petrol is even more than the top-end diesel automatic variants of Nexon, Sonet and XUV 300. A part of this high price can be attributed to the fact that Brezza comes with 1.5-litre petrol engine which makes it ineligible for excise duty exemption. The petrol vehicles with 1.2-liter and less capacity are eligible for lower excise duties. Further, the hardware used in integrating the mild-hybrid technology in Brezza has also added to the cost factor of the SUV. 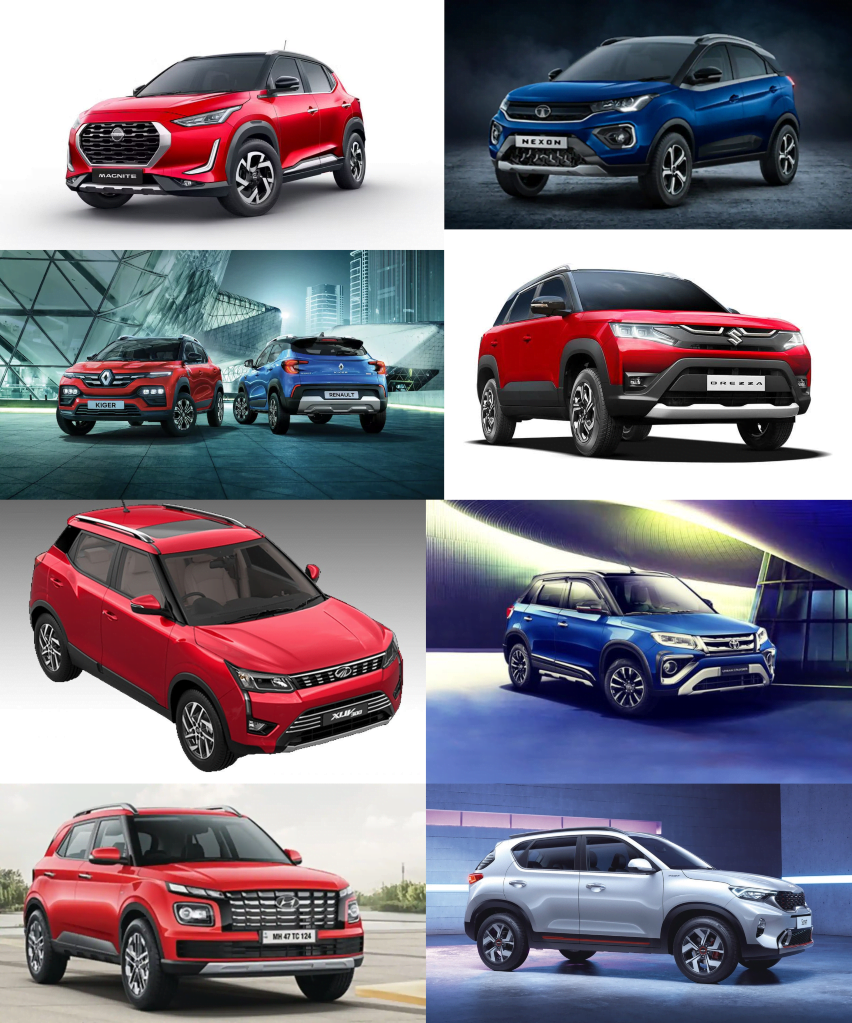 A winner in this comparison is difficult. The Maruti has just become the most tech-loaded and more appealing SUV against the likes of the Korean twins with its over-the-top fuel-efficient petrol motor. The Urban Cruiser will become the same in the coming month. We added it here for reference. Mahindra XUV 300 and Tata Nexon have excellent safety and design along with automatic diesel options. The Korean twins also get a diesel motor but Sonet comes with an automatic only. The refined nature of its interior and engines make the Korean twins feel like a very premium SUV. 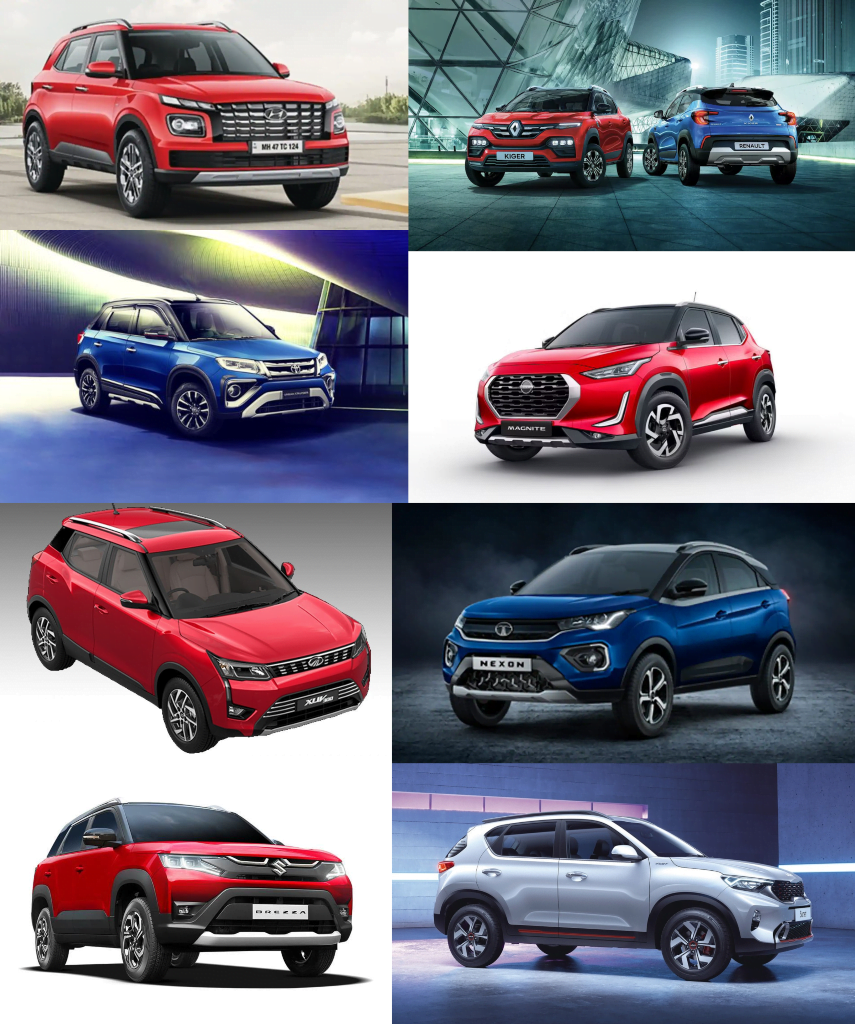 Magnite and Kiger offer splendid turbo petrol motors with CVT and Magnite is the better choice between the two as it offers more value for money. Turbo petrol on the Mahindra XUV 300 and Tata Nexon also get automatic options which the Maruti lacks. Maruti has truly ditched the 1.0-liter booster engine for good it seems. Being expensive on the top end and not very enthusiast-friendly powertrains makes the Brezza not so appealing to both sides of the masses. However, if you can and want to go with the lower variant you won’t be doing anything wrong considering it is the safest Maruti to date which is set to get even better now.