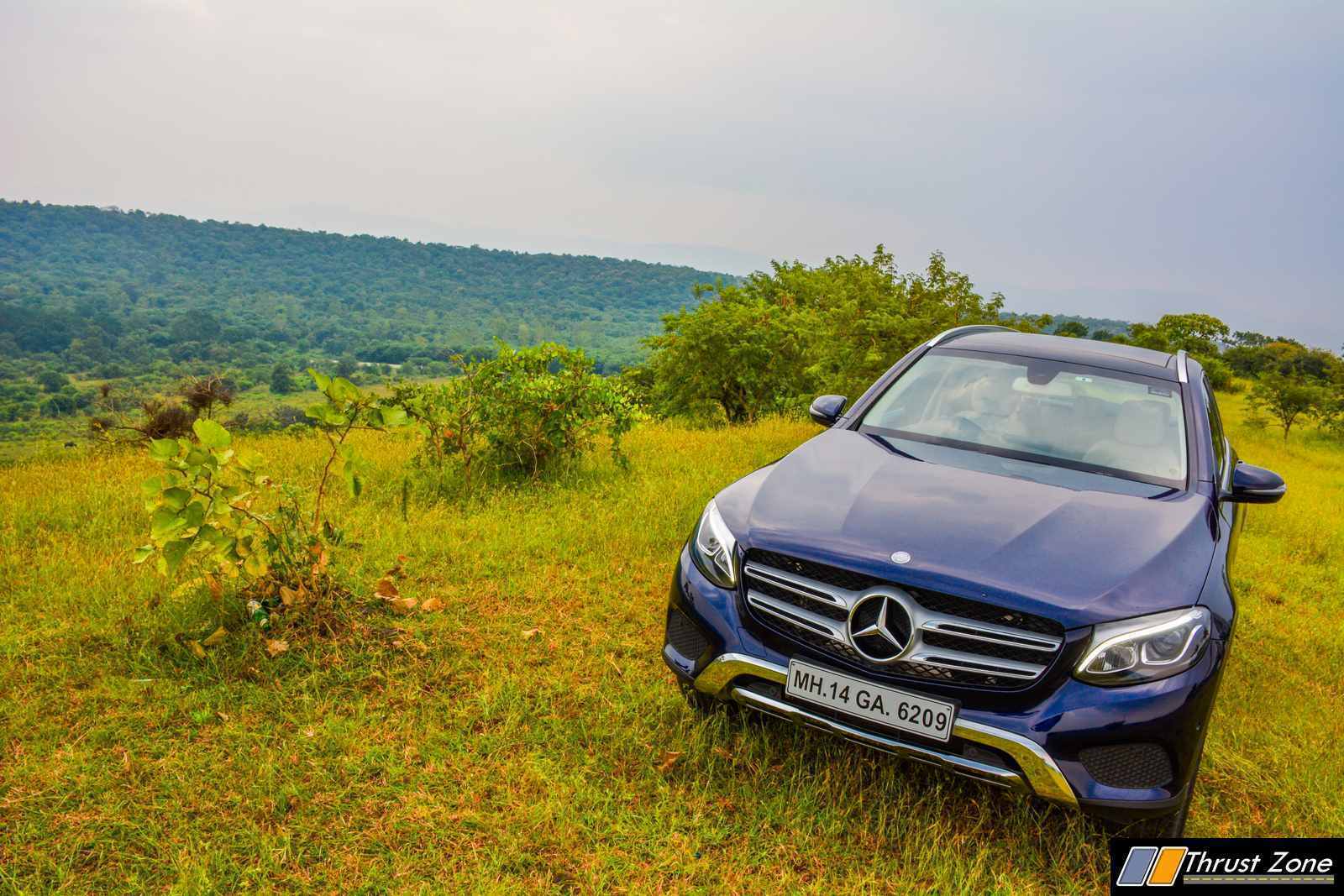 Mercedes-Benz GLC300 is a SUV based on the C-Class. Becomes the proper entry level SUV with rear wheel drive on offer. We spend some time with the petrol motor to find out what is it like to drive 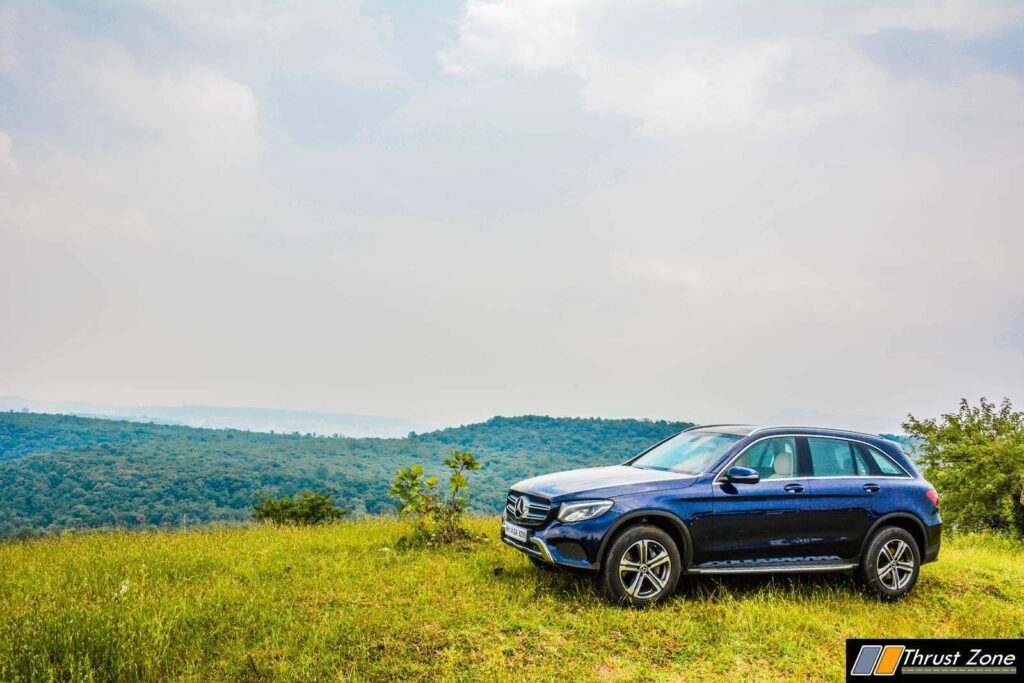 Even if you have been living Under the rock for the last 5 years you might have received notification (some how, digital world, cannot escape it)saying Mercedes-Benz is rocking the luxury car market in India. That’s how apparent the success is for the brand. The manufacturer is rolling out products almost every month for an entire year to increase its market share by offering everybody everything they want. Clearly everybody wants high performance cars and most importantly sports utility vehicles. Mercedes globally has been working on SUVs in every segment. Mercedes has given a new nomenclature for all kind of SUV that now roll out from the factory determining which SUV is based on which platform. 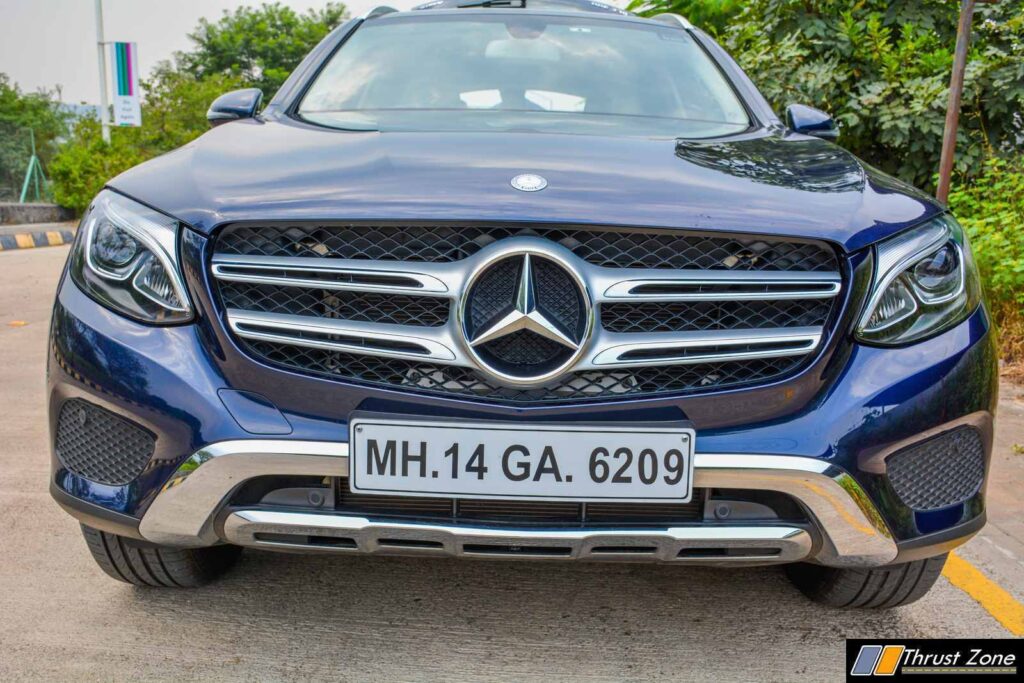 When it comes to the design, the SUV has smooth lines all around, curvy approach to all the panels on the car. The C pillar looks like a floating panel give it crossover SUV look. Front of the car has the Mercedes twin slat grill, a large Mercedes logo along with C-class inspired headlights which were first seen on the E-class. Tail lights are also wraparound units which have twin LED strips inside them. 18-inch alloy wheels on this variant make this SUV stand out with a sporty and bulky stance. Overall, the car looks aggressive and bold at the same time despite a sophisticated approach towards the car making it a very good choice in this segment for customers who want the right balance. 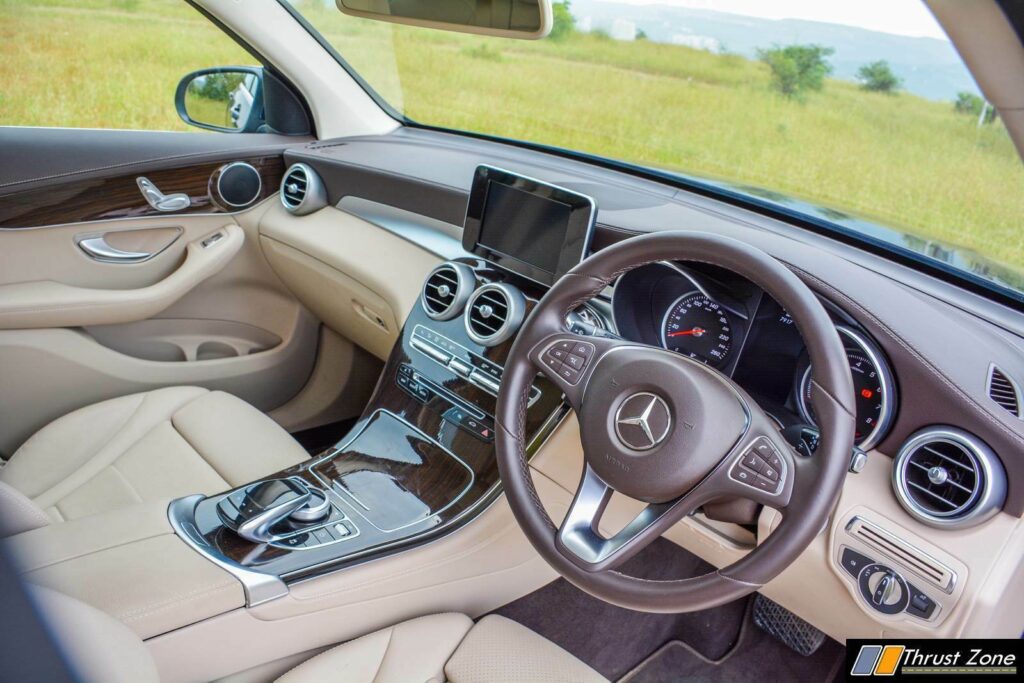 Typical with Mercedes interior, it is a very regal place to be in. Beige interiors with brown steering Wheel and other brown inserts on the dashboard make it a luxurious setting. The layout is very Mercedes as it has large vents in the middle. Air conditioning controls below it along with buttons to control the infotainment system. Something that can also be controlled with the rotary knob placed ahead of the armrest. The center screen isn’t touch unit something that can be a downer for its customers. 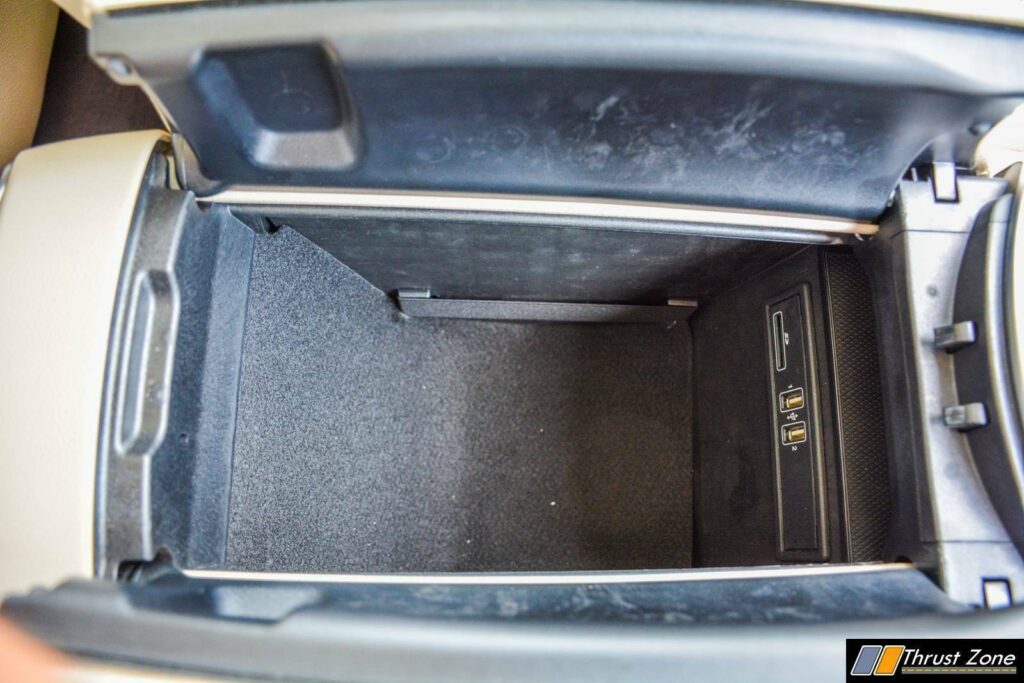 The instrument cluster can show you everything what the screen can also do via a host of buttons on the steering wheel. Right from navigation to media, telephone to trip functions can be controlled via the instrument cluster. There are vehicle setting options which allow you to change the modes for engine and steering. There are four driving modes such as Eco, comfort, sports and sports Plus. We particularly love the switches for the window operation and always appreciate the seat controls on the door pad rather than on the seat itself. 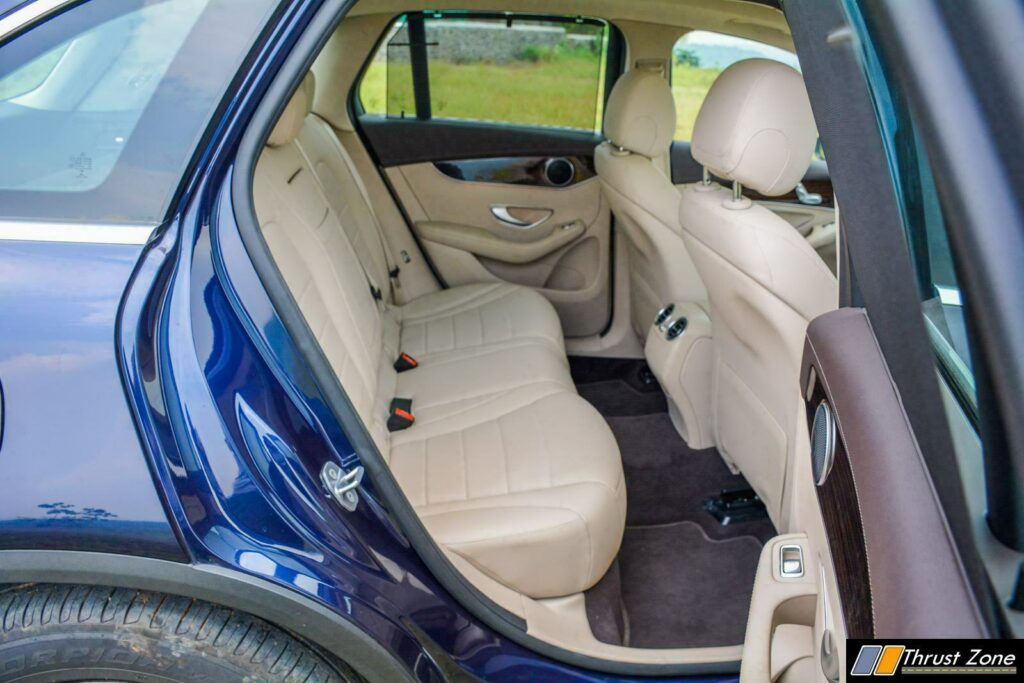 Space in the back seat is good when it comes to legroom, shoulder room and headroom. Under thigh support could have been better. There are sun blinds for rear passenger windows. There is a 500 litre boot space but it’s occupied by a spare wheel. Glovebox and center armrest cubby is deep enough to accommodate whatever you throw inside it. There are neat touches on the inside such as lights on the top of the roof over every door which has a coat hook, grab handle at the same time. Safety features are in plenty which includes 8 airbags, ESC, abs and much more on offer. Bi Xenon LED headlamps our own offer as standard. The Mercedes GLC300 comes with a 2.0 litre 4-cylinder engine that makes 245 PS of power and 350 Newton metres of torque. The engine is smooth and refined barely any nvh levels creep into the cabin. Low end drivability is good, but could have been better as engine wakes up after 3000 RPM. Mid range is really good as the car takes off and so is the top end because you end up doing illegal speeds very quickly. There is good amount turbo lag we felt in the comfort and eco mode. However switch to sports plus mode and the engine is kept on boil thanks to the gearbox, which helps keep the engine in the power band, so that you have instant acceleration. The motor does sound like a mini AMG version when it reaches the red line. The 9-speed gearbox could have been smoother and faster, but it does the job most of the time without any complaints. We wish it was a bit more enthusiastic. Surprisingly, we got quite a good efficiency number while testing the car, which was 9.09 km/l. 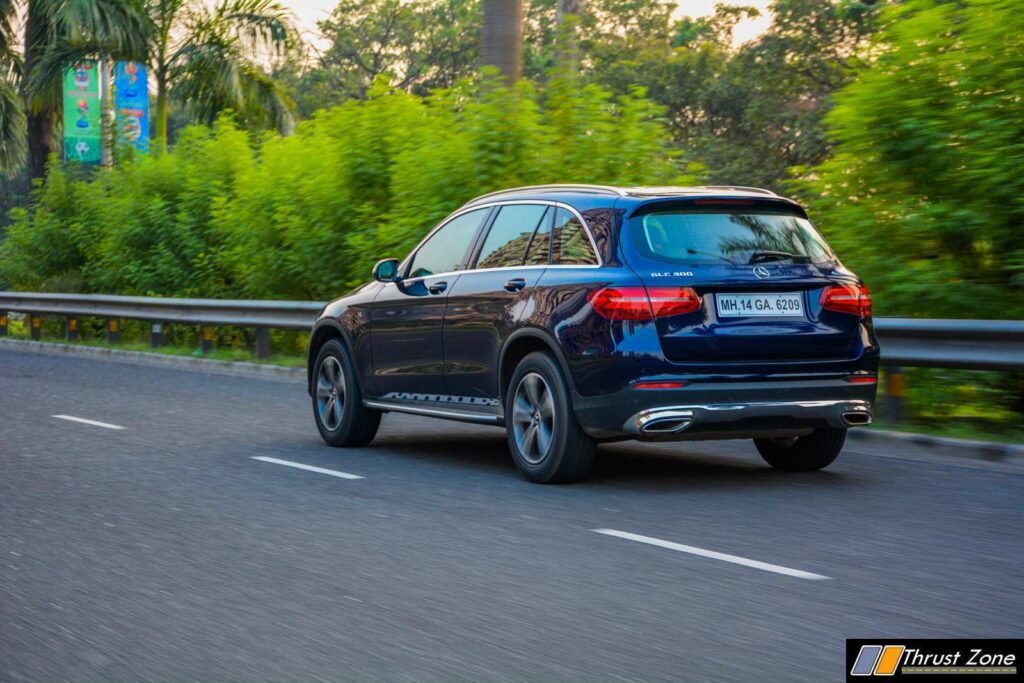 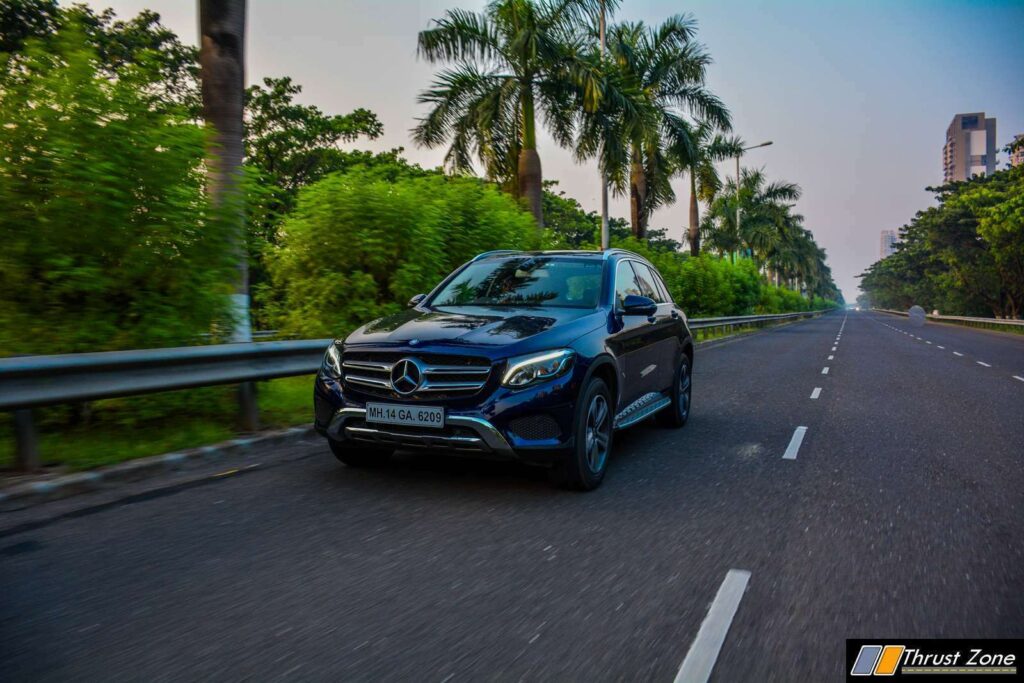 When it comes to driving dynamics, the GLC300 behaves rather well and is like a car on stilts. Body roll is well controlled. There is enough grip from the tires. Steering is precise and direct but it could have been more feedback rich. Brakes are good with good pedal bite and 4 disc brakes around the SUV are seen. Our test car was with 18-inch wheels and the ride quality was stiff and border line harsh, so going fast over bumps was the best thing to do. 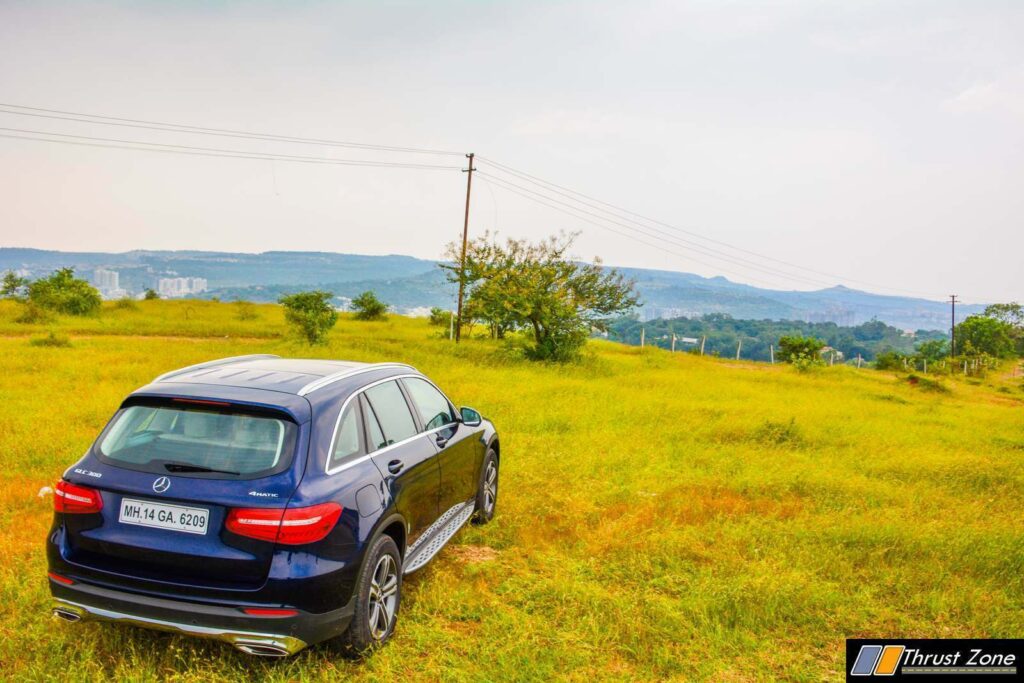 Mercedes is crafting cars once again. There was a time when it was making cars. The difference can be seen. The stepping inside after admiring the very soothing to the eye styling and then you see the dials which have a hint of nostalgia in their fonts and then you hold the brown steering wheeling, it does make you feel like a special indeed. GLC comes along as a statement with everything it’s offering in the market. Be it engine options or accessories. The SUV does stand out, makes new conversations and is distinctive in a competitive market, job well done then.