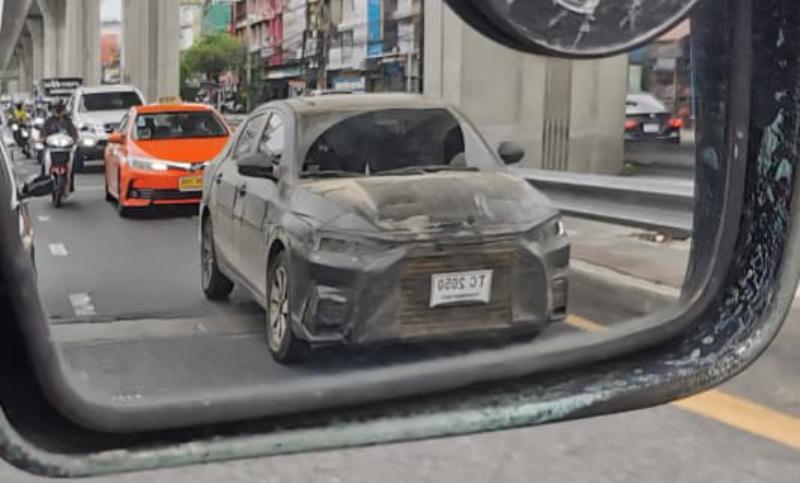 The Toyota Yaris sedan has been a very popular offering in the South-East Asian market but the model failed to garner the same kind of volumes when it was on sale in India. And while it’s been discontinued in the country, South East Asia will get a new generation version later this year. Now, ahead of the global debut scheduled in August, the next-generation Toyota Yaris has been spotted testing for the first time out in the open. The spy images emerged from Thailand and give a glimpse of what we can come to expect from the upcoming offering.

The 2023 Toyota Yaris has been internally codenamed D92A and will be based on the modular Daihatsu New Generation Architecture (DNGA). The spy shots suggest a major overhaul in design with a more imposing front that features a larger grille flanked by slim headlamps on either side. The model seems to get a more Lexus-inspired face, which has been the case with the newer Toyotas including the Camry Hybrid and Corolla as well, internationally. The exterior will be inspired by the Daihatsu F-sedan concept but with styling upgrades in line with the family design.

The design also appears sharper than its predecessor with more angular lines adorning the bodywork. On the powertrain front, the model is expected to arrive with petrol-hybrid engine options. There could also be an option of a smaller displacement turbocharged petrol motor as well. Details of the engines though are yet to be revealed. Considering South East Asia is not a diesel-friendly market in the passenger vehicle space, the option of a diesel engine will be limited and market-specific. Transmission choices will include manual and automatic options.

The next-generation Toyota Yaris could also be the name that will be used across most markets. Do note that the Yaris was also badged as the Vios in Thailand and rumours suggest that Toyota could retire the Vios name and give the Yaris a new identity in the market. The Vios name, then, could possibly be used for another vehicle or in some other capacity. Moreover, a hatchback version of the Yaris is expected to follow suit but there’s no word on the same just yet.

Odds are extremely low that the next-generation Yaris will make its way to India. The model was never really accepted in the market and with the Toyota-Suzuki partnership, the Maruti Suzuki Ciaz has taken the mantle to fill that void for Toyota in emerging markets. Toyota already exports the Ciaz from India badged is the Belta to South Africa. And the company is expected to introduce the car badge-engineered car in India as its entry-level sedan. For now, the company is concentrating on popularising hybrids in the country, while the next-generation Urban Cruiser (rebadged Maruti Suzuki Vitara Brezza) arrives later in the year.

There’s also the new compact SUV co-developed by Suzuki and Toyota in the works that is expected to arrive by the end of 2022 and will rival the Hyundai Creta, Kia Seltos, VW Taigun, MG Astor, and the likes. There’s plenty in store from the Japanese carmaker to look forward to.

Next-Gen Toyota Innova Set To Arrive In Diwali, Will Be Sold Alongside The Innova Crysta