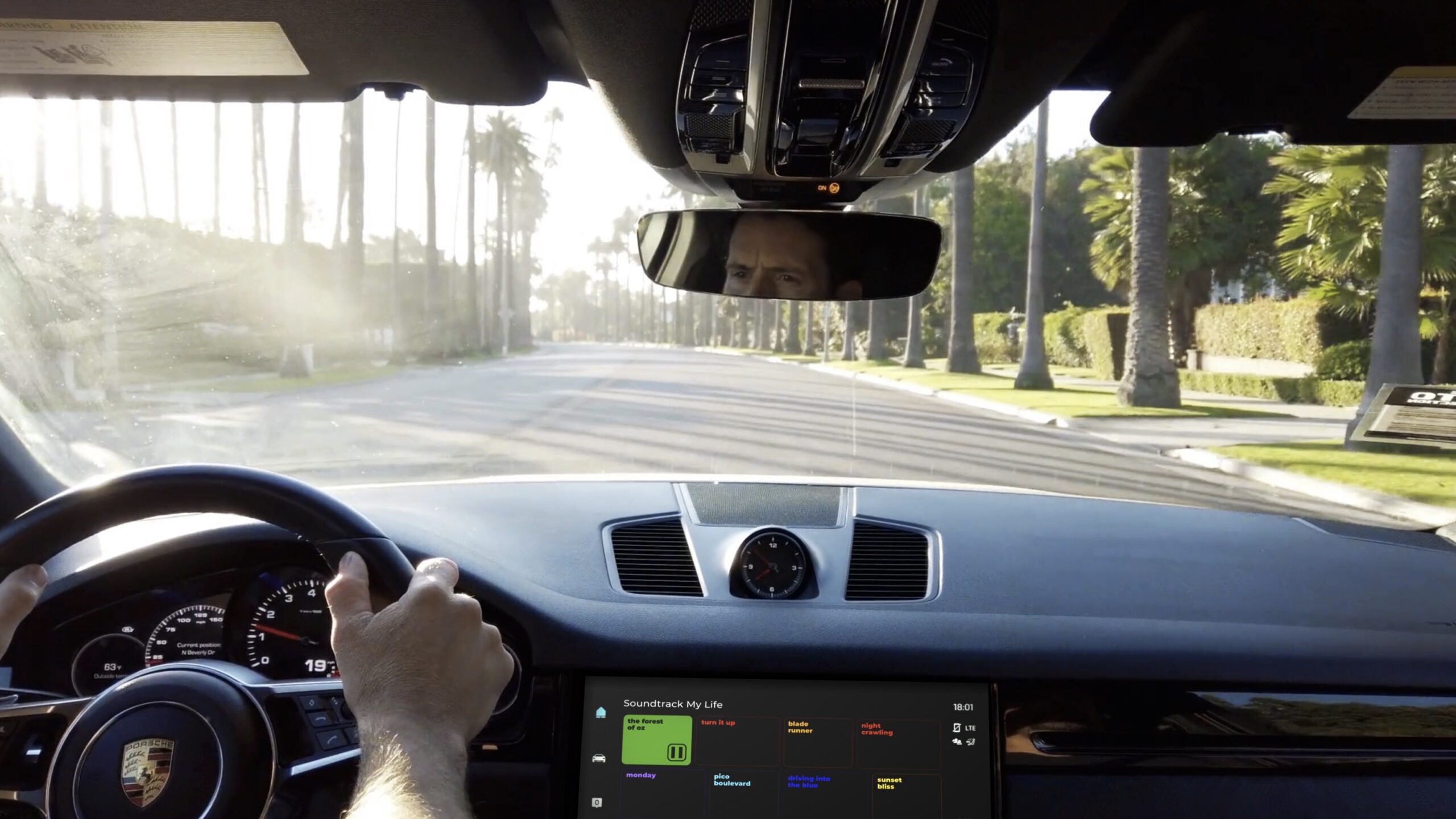 Porsche Digital is creating an innovative music experience for drivers: adaptive sound that adjusts to driving style – and perhaps soon to the route and the mood of the person behind the wheel.

We experience the future of entertainment for the first time in California, where a Porsche Macan is waiting at a set of Los Angeles traffic lights, the Walt Disney Concert Hall looming large ahead. This is fitting and at the same time contradictory. While the famous concert hall always plays music according to a system of notes, we experience something completely new in the Macan. The traffic lights turn green, and the spherical sounds that were just heard in the SUV come to life – not because the driver has started a piece of music but because the Macan is generating this music through its movement. After a left turn, the road is clear and the Porsche starts rolling. Now it sounds as if the imperial troops are on the march in a science fiction film, until the SUV brakes at the next traffic lights and the music, too, falls back into a soft carpet of sound with a final drumbeat. Welcome to Soundtrack My Life.

“This new technology isn’t about playing personalised playlists or simply adjusting the tempo and pitch of existing music to match the car’s speed,” says Norman Friedenberger, Product Owner at Porsche Digital and the person responsible for Soundtrack My Life. “It’s about creating an individual sound experience from a construction kit with a variety of sounds and musical structures during a drive. This is created by the driver and their journey in real time. This will then sound different for everyone – as unique as the journey itself.”

Adaptive sound is the technical term, and it gives users of this technology an alternative: a complement to radio and streaming. “The connection between the movement of the vehicle and the generation of music in the context of driving offers a completely new listening experience,” says Friedenberger. “It’s about becoming one with the driving situation.” To do this, the driver first selects a basic musical mood, a soundtrack composed specifically for a particular driving situation. The software accesses pre-composed musical elements and, depending on the acceleration, speed and centrifugal forces in the car, changes the complexity of the mix of these individual elements, adding or removing tracks and sounds to rearrange everything again and again.

But the story doesn’t end there. As the technology evolves, Soundtrack My Life could one day also detect the driver’s mood and tailor the music to it. Friedenberger also dreams of real-time sound development in the cloud and sharing music online. “You could listen to someone who’s on the road in New York or Tokyo right now. The catalogue of ideas and visions of where the journey might go are endless.” Salchow believes it is possible that the car will emancipate itself from the composer. “The breakthrough would be when humans are no longer involved at all. The technology would then not only combine pre-composed set pieces, but also come up with the melodies and look after the phrasing, based on the artist’s musical signature.”