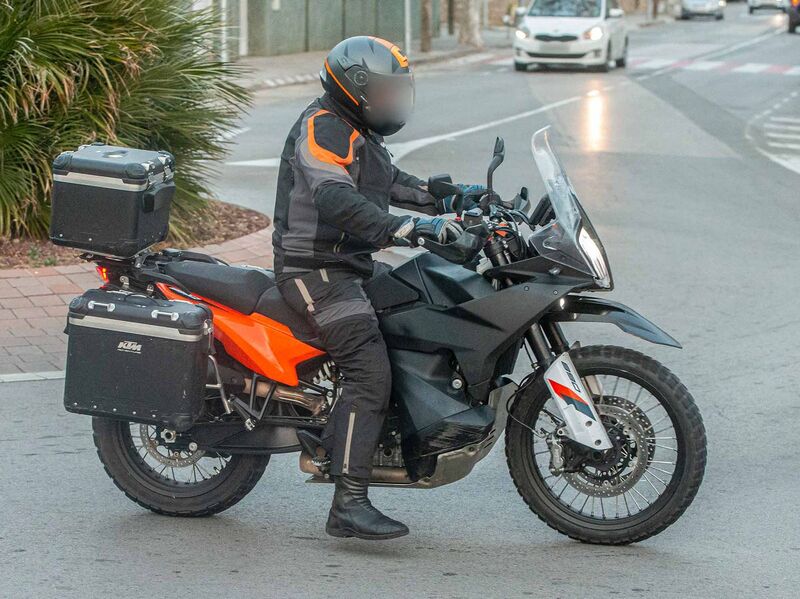 KTM’s middleweight adventure range is all set to get a new addition if the latest spy shots are anything to go by. The most recent spy shots that emerged from Europe reveal a road-going version of the existing KTM 890 Adventure that could join the line-up soon. The model seems production-ready and will be the third variant based on the 890 ADV after the S and R variants. The new road-biased version promises better tarmac touring abilities on the middleweight adventure motorcycle and also gets substantial changes accordingly.

The upcoming KTM 890 Adventure road-biased version appears to be a more practical, everyday tourer and could be positioned as the base version in the 890 ADV family. KTM has taken the same chassis, headlight and subframe as the standard model but the model uses a traditional single fuel tank instead of the saddle tanks of the other versions. The bodywork is also different that will probably shed a few kilos too. The model is also expected to borrow other cycle parts including the wheels, brakes, suspension and tyres from the 890 Duke to offer better on-road dynamics. That means the 21-inch front and 19-inch rear spoked wheels will be replaced by 17-inch alloys. Moreover, the suspension is likely to come with a fair amount of travel over the Duke and lesser than the full-size 890 ADV promising the right set-up and ride quality to tackle bad roads. Another benefit will be the lowered saddle height that will make the 890 Adventure more accessible to riders. All this will make it a proper rival of the road-going versions of Ducati Multistrada 950 and the new Tiger 900.

Meanwhile, the 2022 KTM 890 Adventure version which is more off-road friendly with spoke wheels will continue with large wheels, suspension travel and more off-road biased tyres and electronics that suit that purpose. Both off-road and on-road variants of the 890 adventure will have R and S variants to choose also. Most importantly, they will be Euro5 aka BS6 ready.

The new entry-level KTM 890 Adventure is likely to debut this year. There’s no word on the India launch though and we will have to wait for a while before KTM India decides to introduce its “big” bikes again in the country. For now, the second generation KTM RC 390 is on the manufacturer’s radar that will arrive in early 2022.