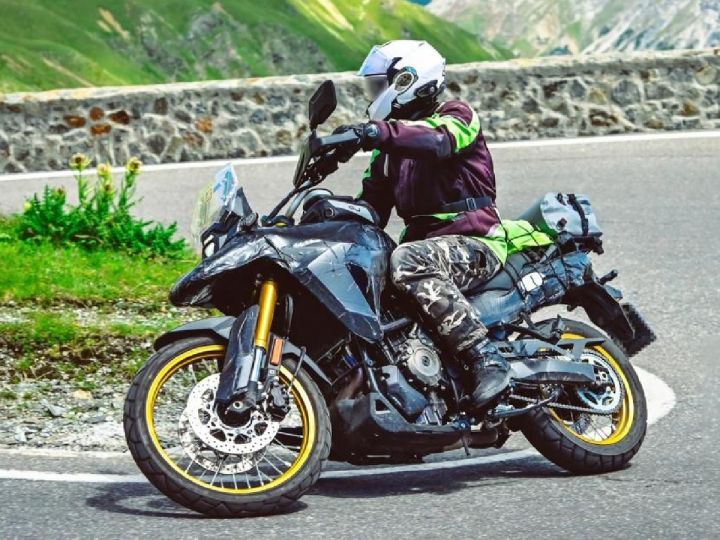 The Suzuki V-Strom 650 XT is one of the more capable adventure tourers on sale in the middleweight segment. But the model has been around for a while and is in need of an update amidst newer rivals. And it seems, the wait for a new offering won’t be too long with the V-Strom 700 spotted testing recently. A near-production version of the Suzuki V-Strom 700 was seen testing in Italy and the ADV could make its debut at EICMA next month.

The new Suzuki V-Strom 700 is expected to be based on an all-new platform that will spawn more 700cc motorcycles in the future. The new offering will sport a newly-developed parallel-twin engine, but will continue to use the V moniker for its ADV range. That said, the new motor will make things more compact, bringing in a lighter kerb weight, more power and torque, and more reliability as well.

The patent designs leaked last year confirmed the parallel-twin development, while also confirming that the airbox will be placed under the seat to allow for easy access to the air filter. That way, the air filter can be swapped without having to remove the fuel tank. In terms of power, expect the specifications to be slightly better than the current 645cc V-Twin. The motor presently makes 70.7PS and 62Nm of peak torque, paired with a 6-speed gearbox.

The Suzuki V-Strom 700 will also benefit from better equipment as seen on the test mule. This includes USD forks up front and a monoshock with a new swingarm at the rear. The test mule rides on wire-spoked wheels with possibly tubeless tyres. It’s also expected to get a bigger 21-inch front wheel, up from the 19-inch unit on the V-Strom 650 XT. The rear could be a 17-inch or 18-inch unit. Other upgrades likely include multiple riding modes, three-stage traction control, dual-channel ABS and more.

The V-Strom 700 will borrow its design and styling from the bigger V-Strom 1050. Do expect subtle changes though but expect to see the twin-stacked LED headlamp along with a TFT screen with smartphone connectivity via Bluetooth.

The V-Strom 650 may not be as popular as some of its rivals today in India but there will be quite a few takers once the updated version arrives. The new V-Strom 700 will compete with the Kawasaki Verysts 650, Triumph Tiger Sport 660, as well as the Yamaha Tenere 700 and the upcoming Honda Transalp. We expect to learn more details on the V-Strom 700 in a few weeks.