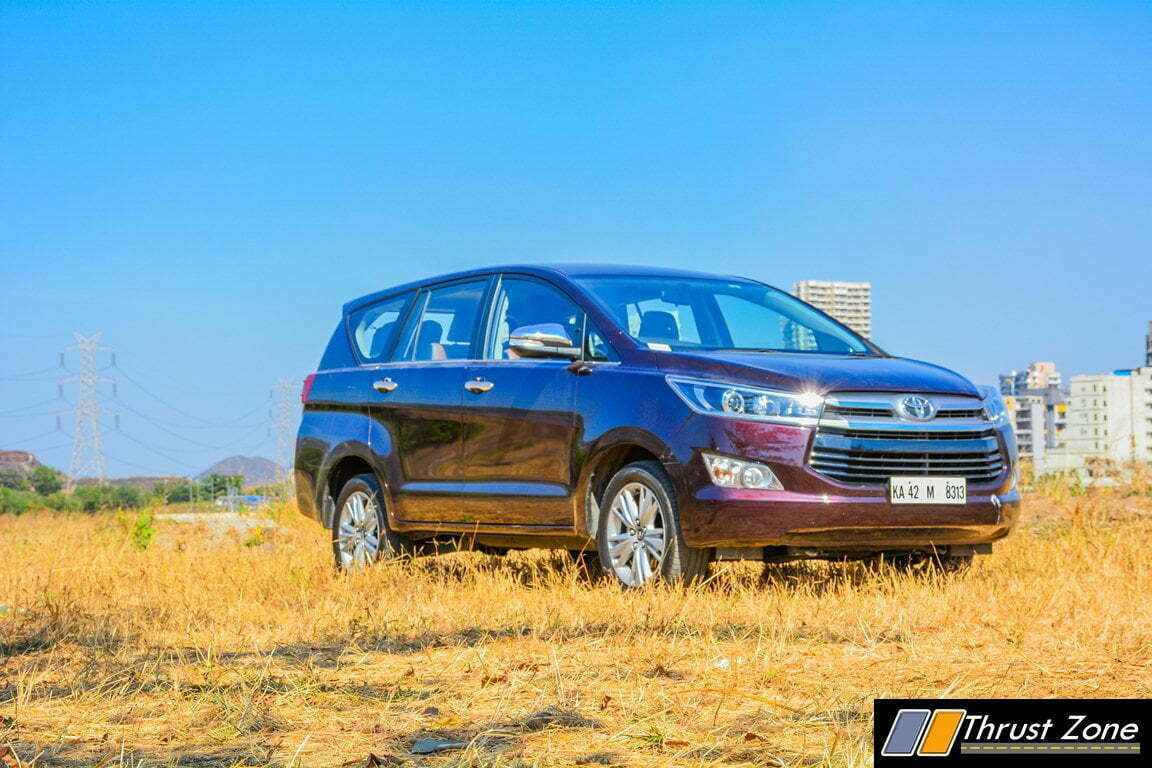 All of a sudden, you have seen Toyota in the news everywhere. The silence for some time that was there before, paved way for a massive onslaught from Toyota to boost car sales in a market which has become very tricky to crack. The after effects of many government policies has left some manufacturer in a worry about the future. However, things looked good as the market shows signs of improving and not being largely affected by the same. All of this includes demonetization and the diesel ban along with tightening emission rules. 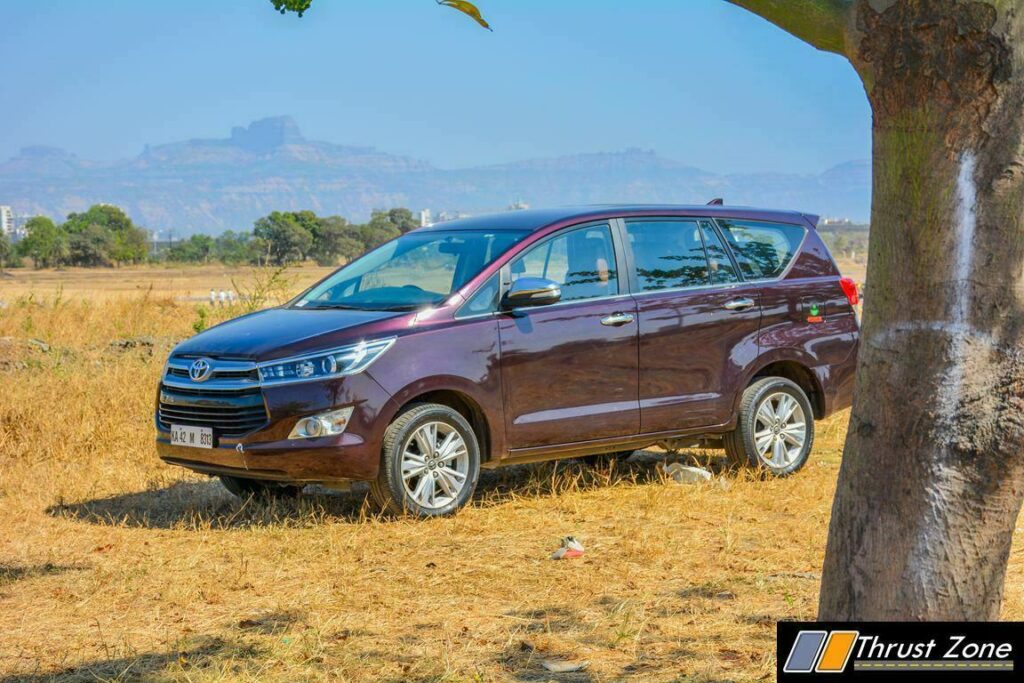 Toyota made sure the Indian market gets a new range of vehicles that are friendly on every aspect that is set to impress Indian audience. All of this began with the Toyota Innova Crysta coming couple of months earlier in diesel disguise and now we see the petrol variant. Yes! MPV with ladder on frame chassis comes with a petrol engine that is mated to an automatic gearbox. We have spent some time with the vehicle in its natural habitat to tell you whether you should be choosing a turbo diesel over a naturally aspirated petrol engine. 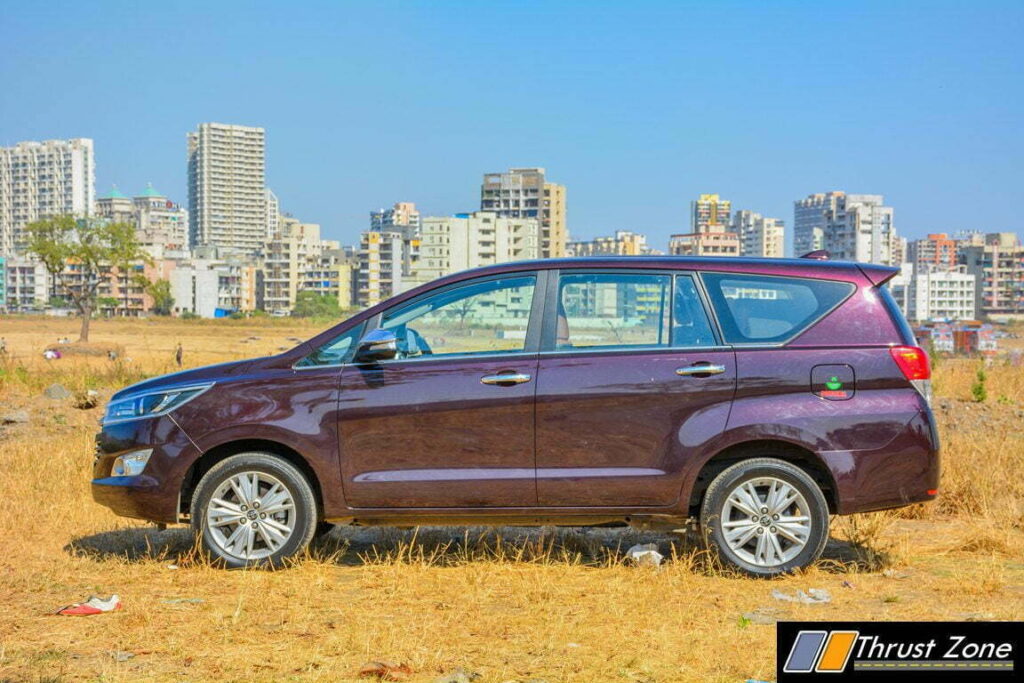 When it comes to the design of the MPV. The design is evolutionary over the previous MPV. The lines have been extended and in all ways. Let it be window lines or sheet metal. The MPV has grown in every single dimension as it’s longer, wider and has a similar wheelbase. The tail-lamps are large and wrap around units. The front headlamps are fitted with large dual barrel units, which have projectors and LED in them. The side profile has increased by a big margin and has right amount of metal and glass ratio to give it an proportionate look. 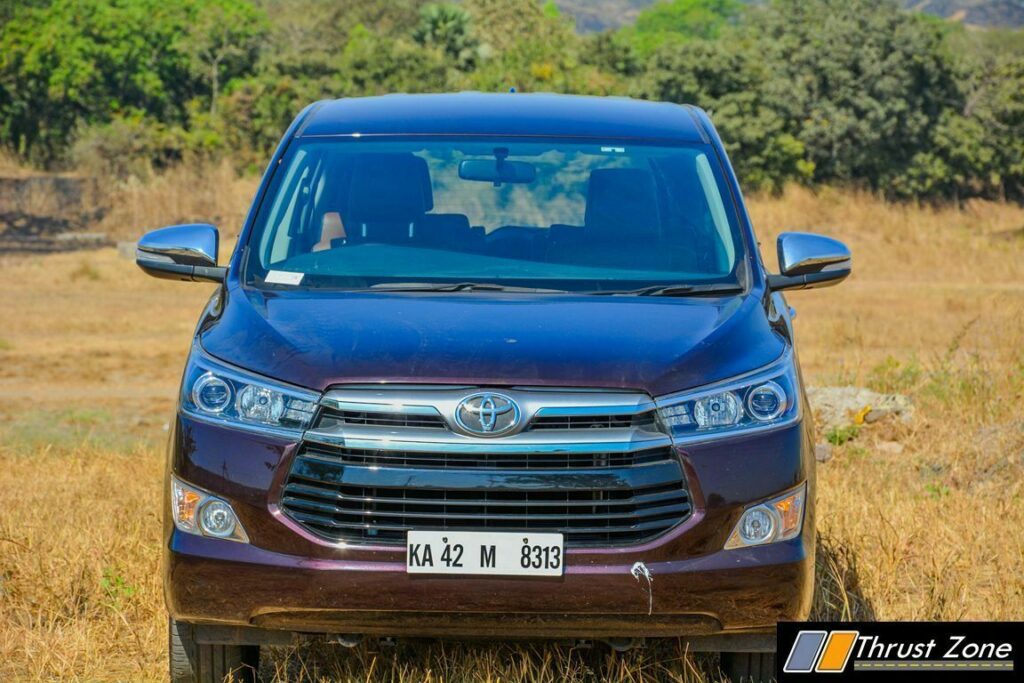 Front grille is a busy unit which has many lines and the front bumper shares the same too. The alloy wheels on offer are now 16-inch units and the design is new, which is a multi-spoke unit, The overall stance and look is now truly premium and stands out in the MPV market. 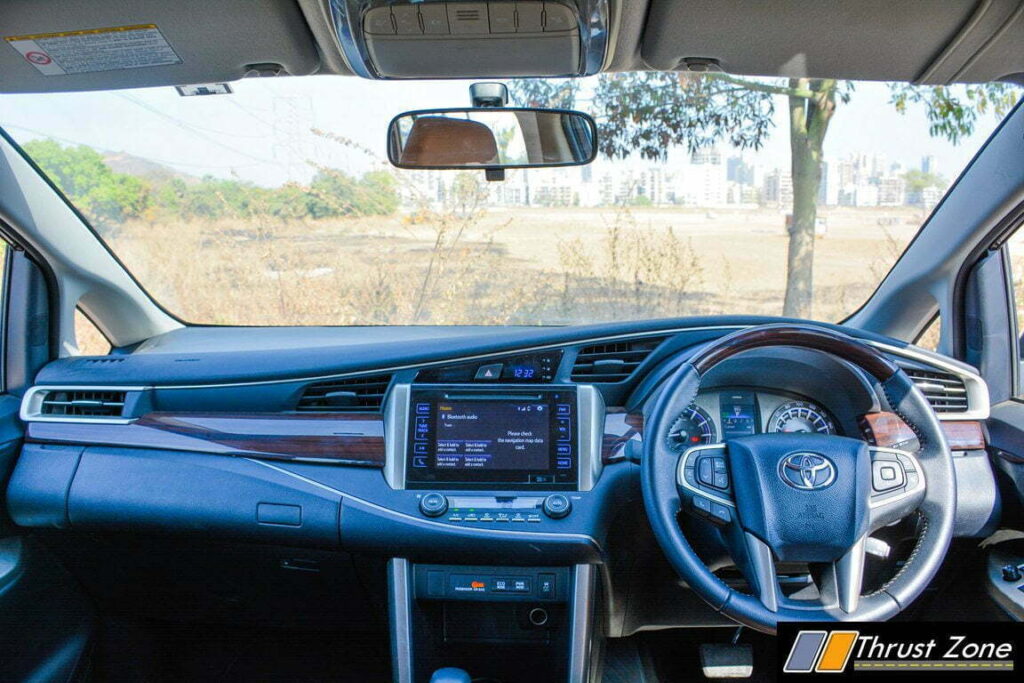 When it comes to the interior of the new Innova, the game has completely changed. The dashboard is parted into two when it comes using plastic and leather. The design has changed and it looks more modern and driver oriented. The touch screen is large and has all the functions from a modern day car. Navigation, connectivity options such as Bluetooth, AUX and USB. It allows you to control track for music, choosing radio and the volume is on offer. The A/c control are right below the same and they are stacked almost a vertical manner and the panel of the same is on the very edge. 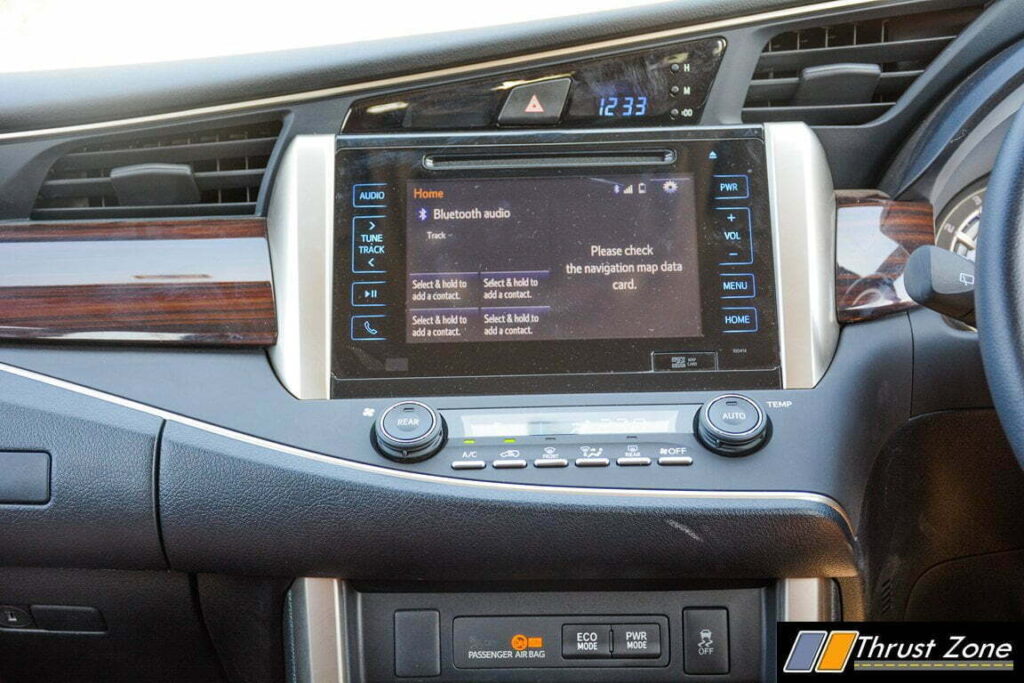 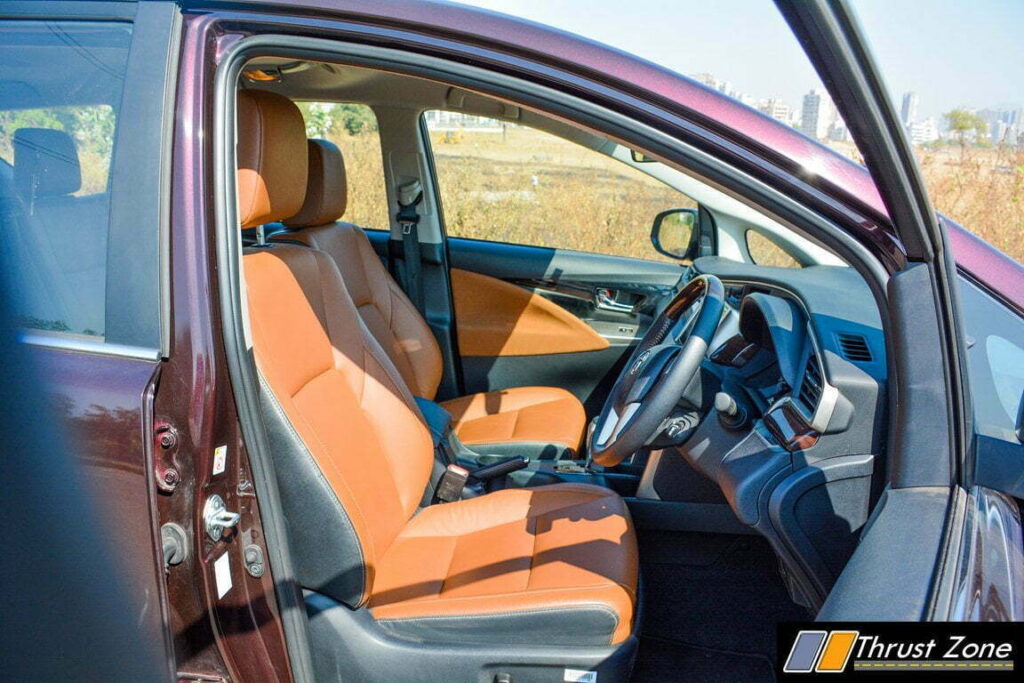 There is a lot of storage space in the cabin for everything you ever need to store in the front cabin and as well as the rear. The only complain we have about the entire infotainment system and buttons that the fonts used for everything is very dated despite there are new cycle parts offered. The color used on our test car was tan beige with black plastics and other parts in the same color suit the premium quotient well. 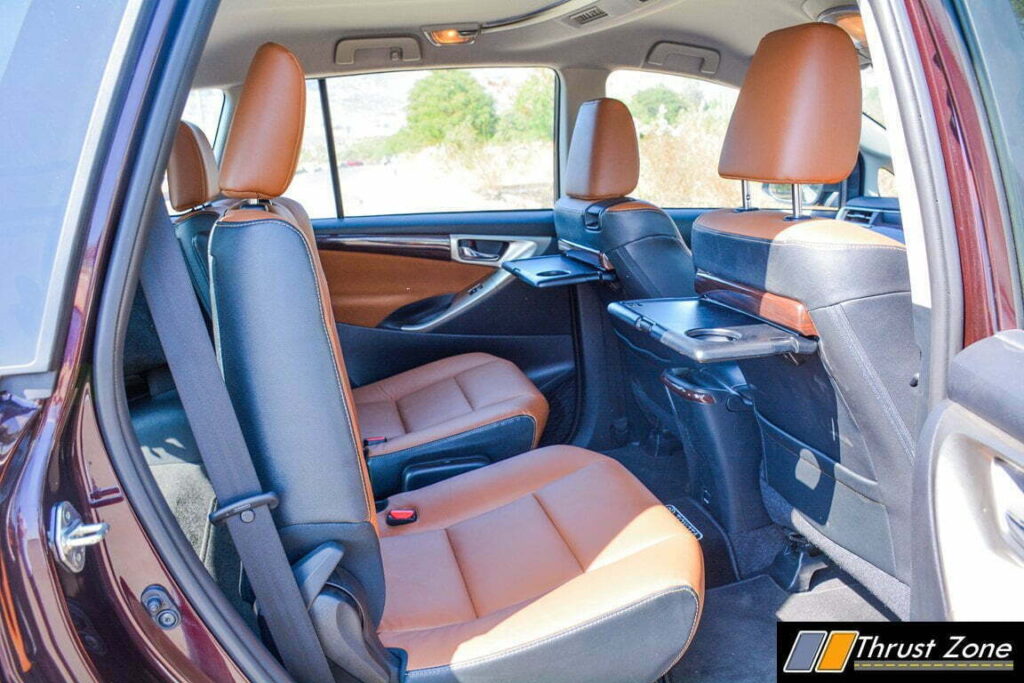 Space in the front and rear is in abundance as there is enough shoulder, leg room and headroom in the MPV. There are tray tables for rear passengers with the caption seat options just like an airplane or a very high-end luxury car. The seats are massive and supportive in all three rows. However, third row is still suited for short drives and children. 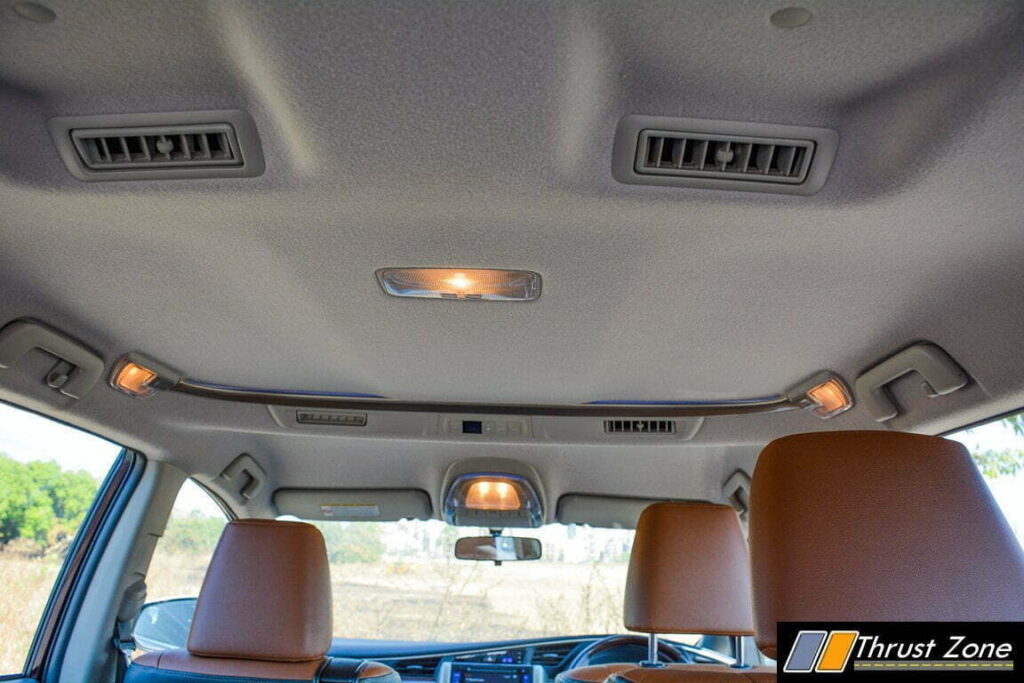 There is A/C for all three rows which keeps the cabin cool and it isn’t a mere blower but a separate condenser for the second row which helps cool the third row. The control are also on the roof which allow you control climate automatically along with manual blower settings. There is also ambient lights on offer in blue color to give Innova the true premium feel. Overall, there is a big change in quality and the already impressive space and comfort making things near perfect. 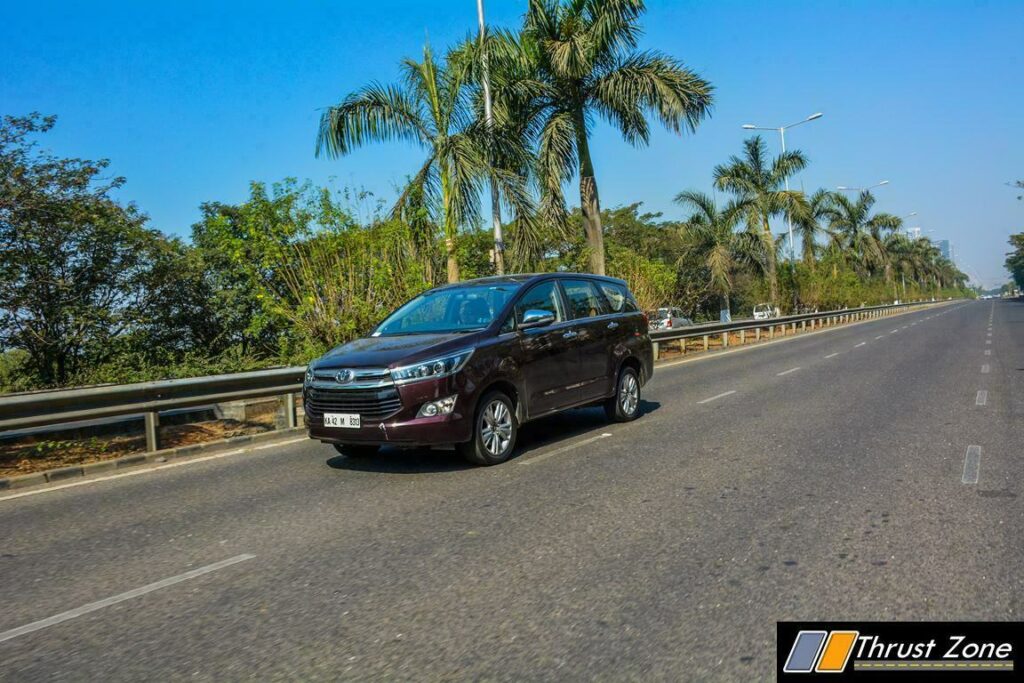 When it comes to performance, the idea of such a large MPV with a naturally aspirated petrol motor with a torque converter gearbox is something that just doesn’t help you gulp down facts on paper. However, the 2.7L engine that makes 166 BHP and 245 Nm of torque is enough to propel this vehicle even when fully loaded. However, the full-blown thrust and shove that the diesel torque gives, is missing. The engine is good on NVH at low to medium speeds and there is barely any sound. The gear box shifts smoothly at these speeds and offers a sense of relaxed nature at slow city speeds. 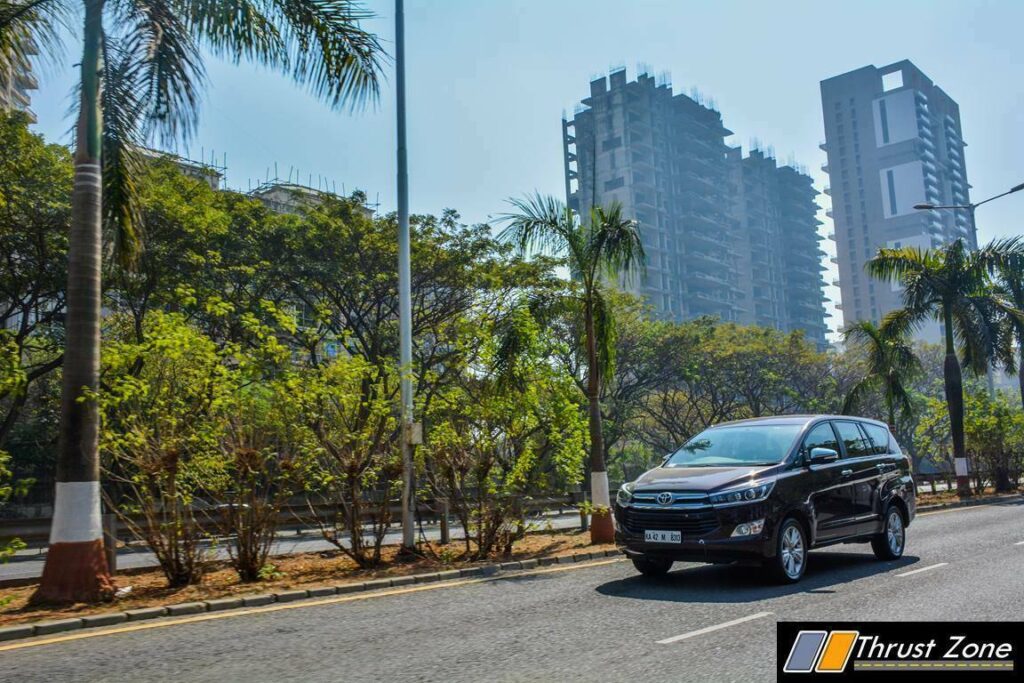 However, mash the throttle to the carpet and the 6-speed sequential takes a bit of time to kick down and then when it does, it lunges the car ahead and that’s when you realize the speeds aren’t that great that it will be with the diesel. The engine sounds rather raspy at higher revs and at redline. There is a good amount of power on offer and the vehicle does build speed as you continue to shift into higher gear. 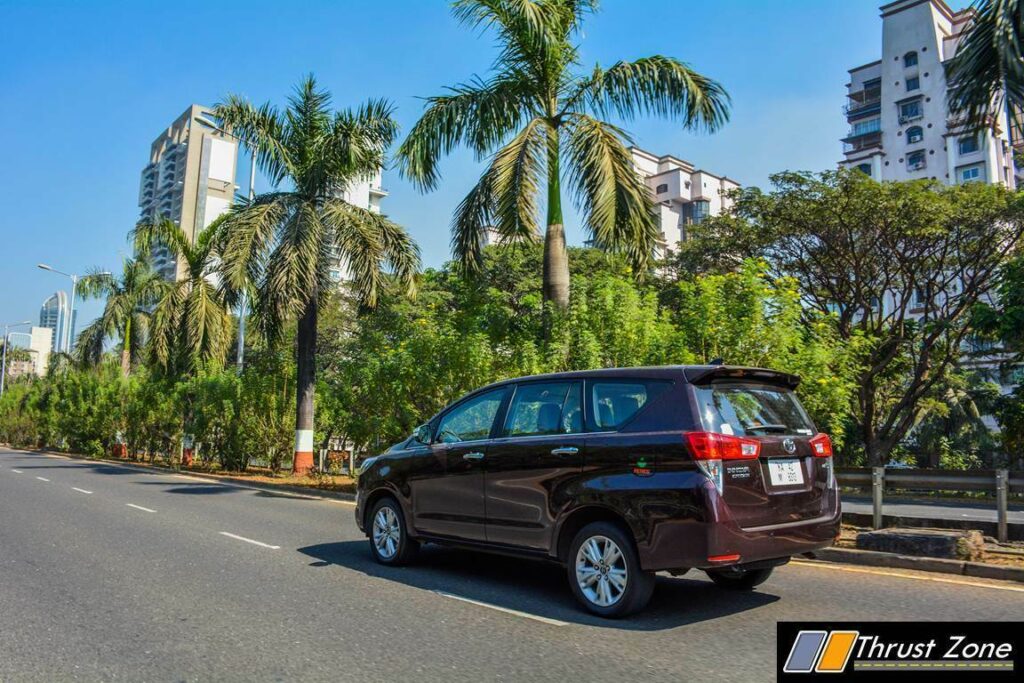 We saw a top speed of 170 km/hr which took some time. Fully loaded with passengers, the case is slightly different. Overall, the petrol motor is best suited for Sunday brunch trips with your joint family or if you are the only friend who has a car. However, apart from that the Innova petrol would have been welcomed with a turbocharged petrol motor and a enthusiastic gearbox. The main issue here is fuel efficiency and we got 6.7 km/l, which doesn’t work in its favor. 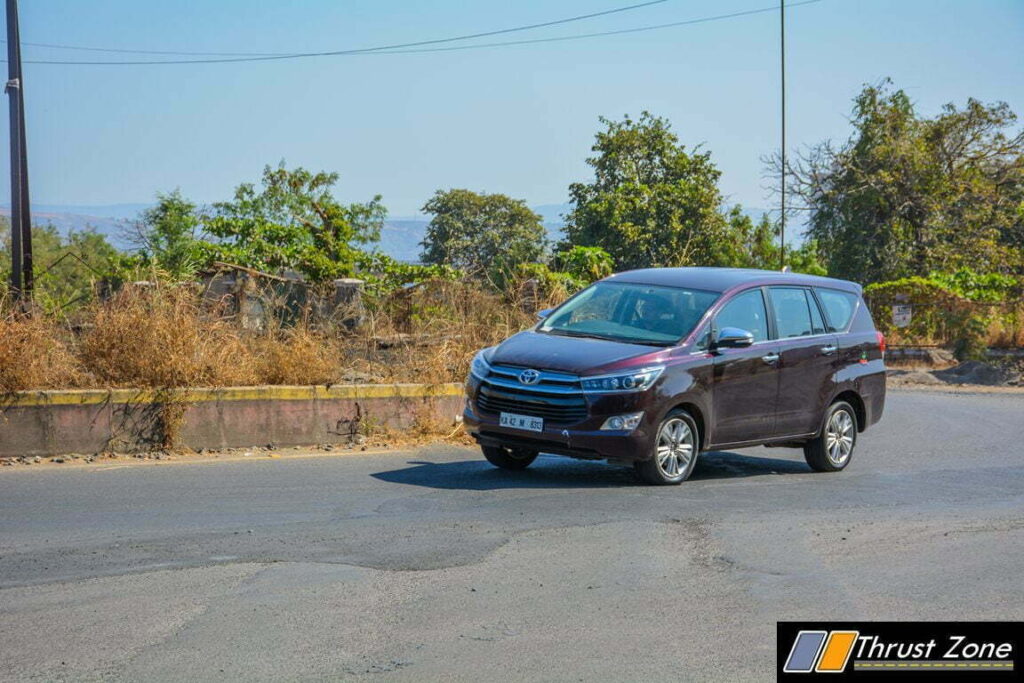 Dynamically, the Innova comes with a ladder on frame chassis which has been revised thoroughly. The suspension has been beefed up and there is a lot of changes to the suspension components. The ride is pretty much the same as before, but slightly more complaint on the petrol variant when compared to the diesel variant. Sadly, the brakes at the rear are still drum units which is shocking indeed. However, disc brakes at the front continue and offer very good stopping power for the car of this size and the performance that it is offering. Steering is light and precise and does what you ask to do well. However, there isn’t much feedback on offer from it. 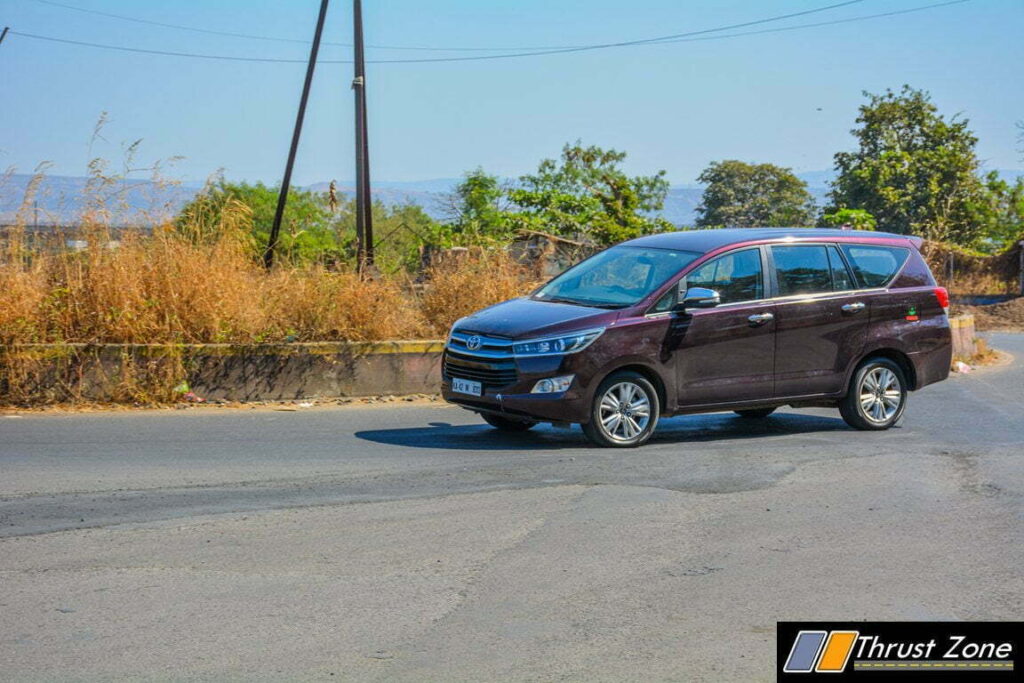 The car exhibits very less body roll than before, something that was already less with the old car. The car uses roll and pitch measurements to make sure the ride stays planted at any given speed and no matter what the road conditions are. Overall, with good ride quality and decent dynamics for a ladder on frame chassis car the Innnova does the job well and is the reason why this MPV is a workhorse and is seen on every highway as it is comfortable and stable at any speed. 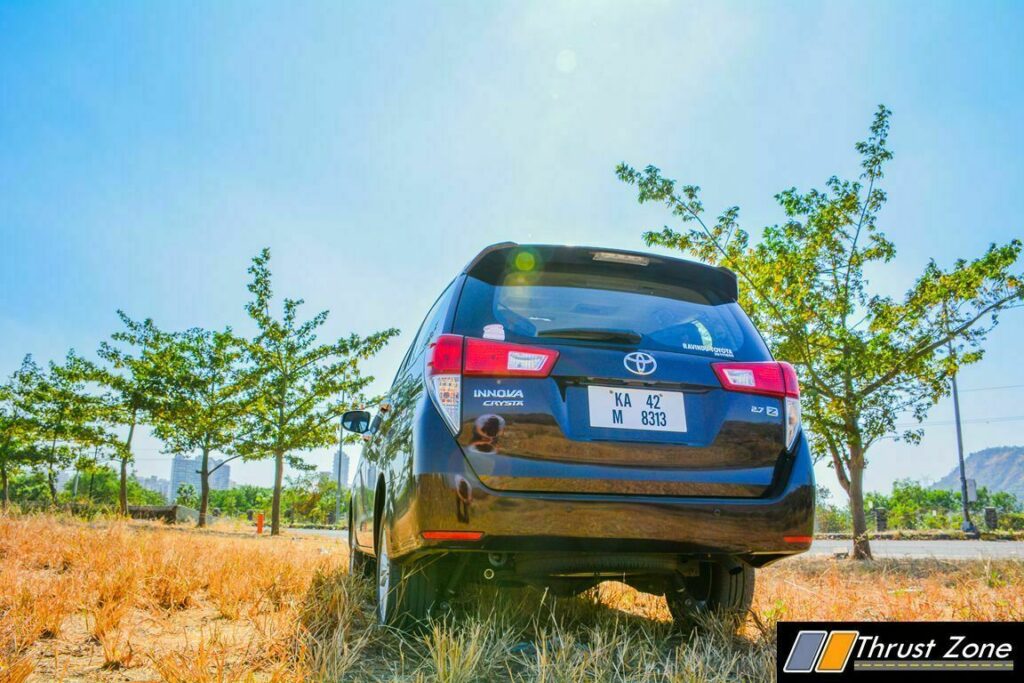 Clearly, the petrol Innova came in the market is because of the uncertainty of the fuel prices, the fuel demand and the government’s hate for diesel fuel in cars. While government is yet to offer solutions and replacements, manufacturer want to make sure they meet demands in whatever way necessary. Toyota already offers hybrids and petrols and saw the Camry take off in sales too. However, with the Innova it could have done better by offering a turbo petrol engine. Nevertheless, the petrol Innova Crysta does its job well and in return you get higher fuel bills. What you will also get to counter that is lower service cost, more refinement only if you are running (mileage) is less, you can should consider getting the petrol MPV. 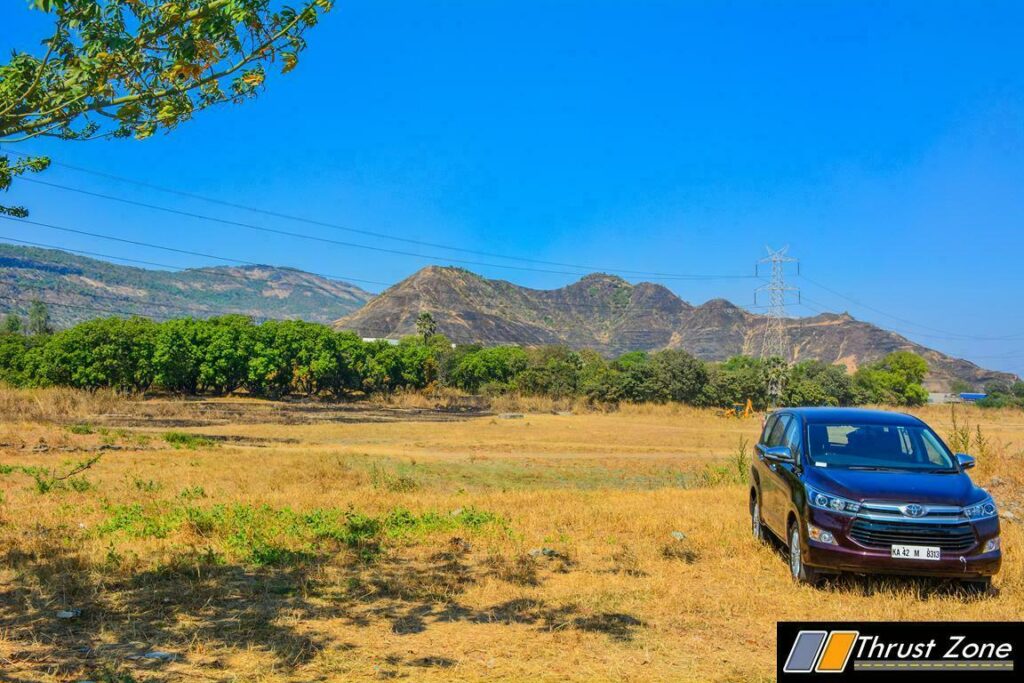