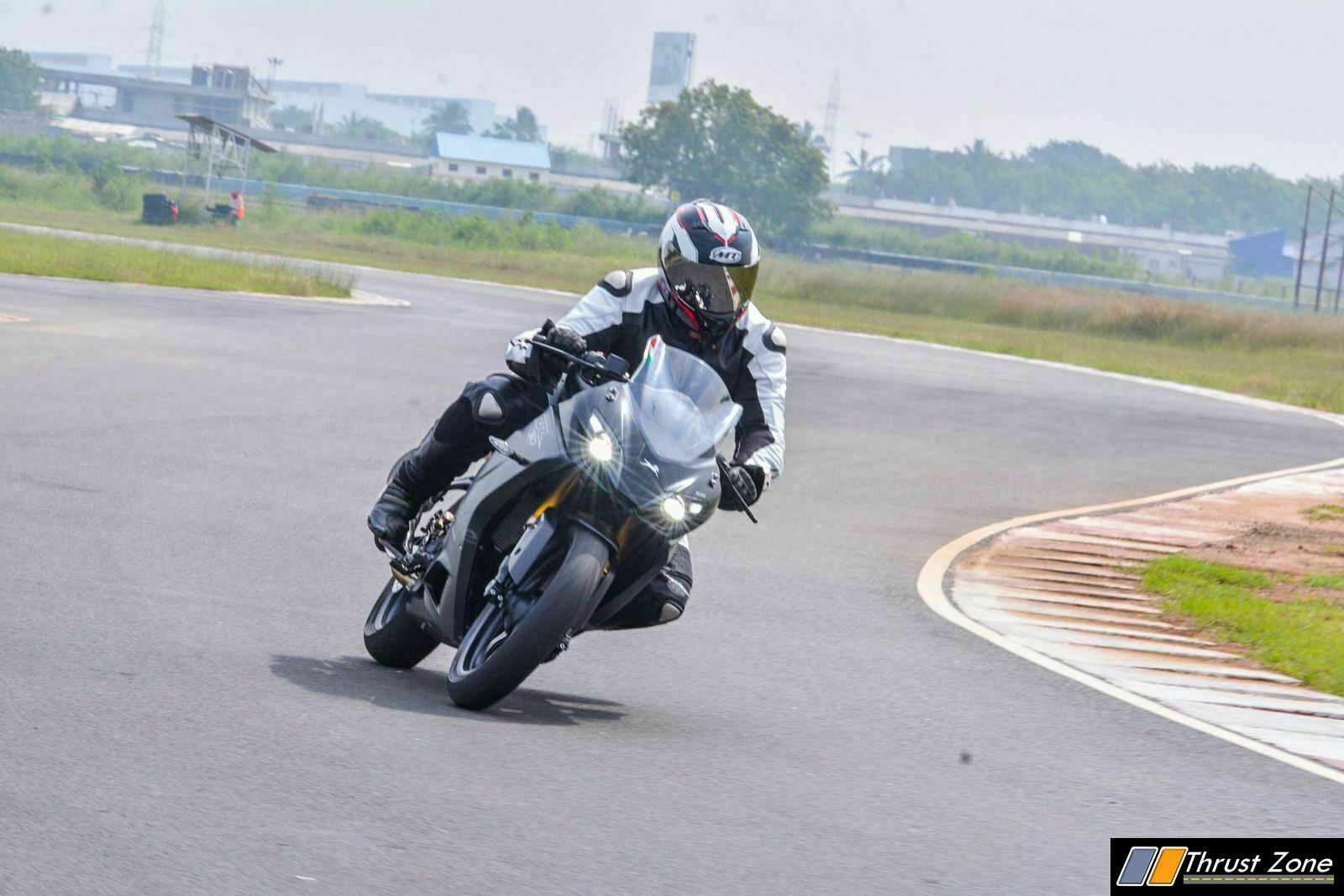 TVS Apache RR310 Review. Four words to be read since a long time after endless waiting. This is not your typical review

The moment of truth was witnessed on December 6’th when the most anticipated bike was launched in the country. Not a new routine for the manufacturer, TVS, that is, launching products late, taking their time. On asking, most of the time, they have told us that all the real world testing happens in front of the world and to make it a production version takes time.

Quality checks make sure that the product goes to the consumer is spot on. The TVS Apache series which includes the 180 and 200 and now the RR310 has witnessed the same. Let’s dive down into action as we have had a good taste of the bike at the MMRT race track. Road test and first drive to follow, which will take time. So is it as good as TVS says. 35 years of racing history has done the job? Let’s find out! 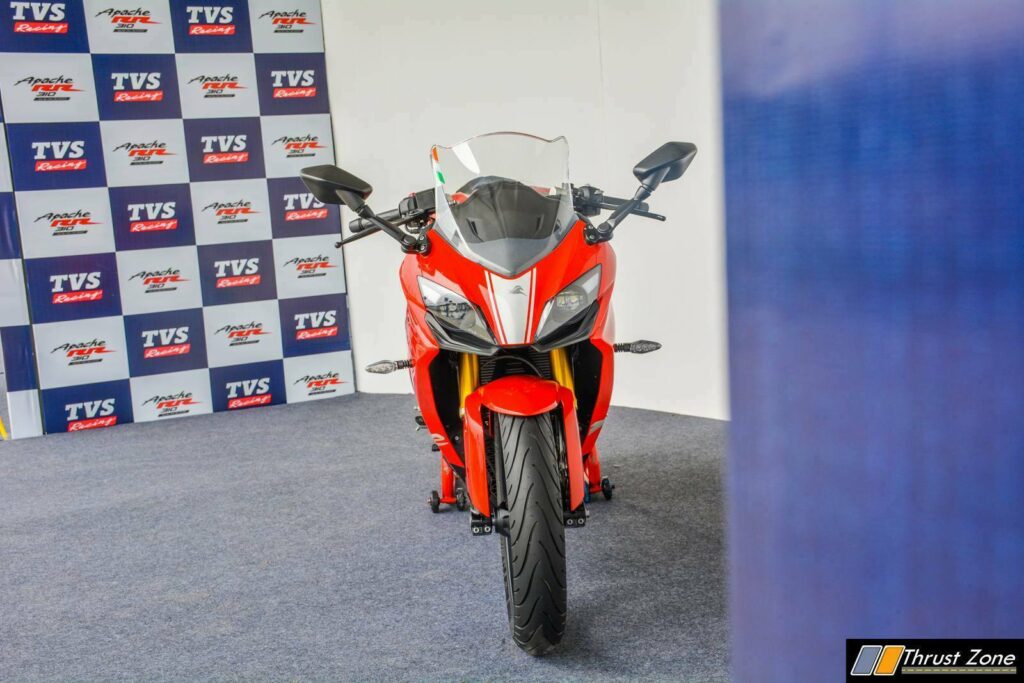 The design has been the highlight. The enthusiast and possible customers have already booked the bike because the way it looks. The dual headlamp setup at the front and a unique tail-lamp setup are the biggest highlights. Both are inspired by superbikes from the country of Pizza though. Side fairing has dedicated vents and TVS says the focus on aerodynamics has never been this high. 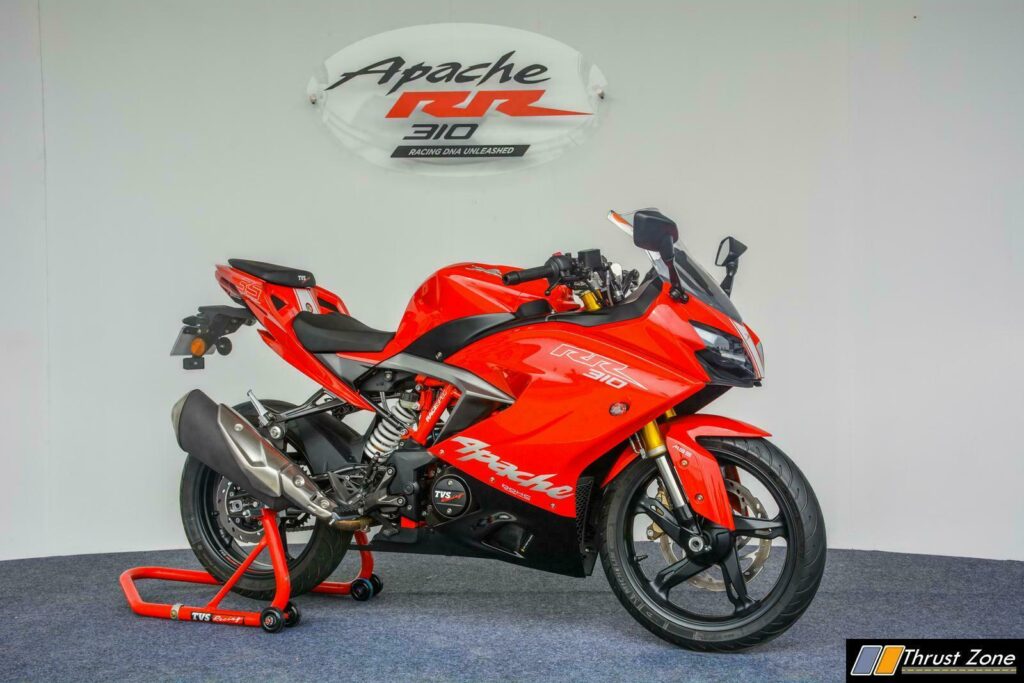 The golden forks, the red or the black color along with black alloy and eye-catching wide tyres make the bike look very racy indeed. Overall, the shark-inspired styling does a great job of grabbing serious attention. The features list is endless with all the fuel efficiency parameter, lap timer, clock, digital tachometer, odometer, usual telltale lights and much more. What looks like something which is a la KTM, the bike has a detachable subframe as well! 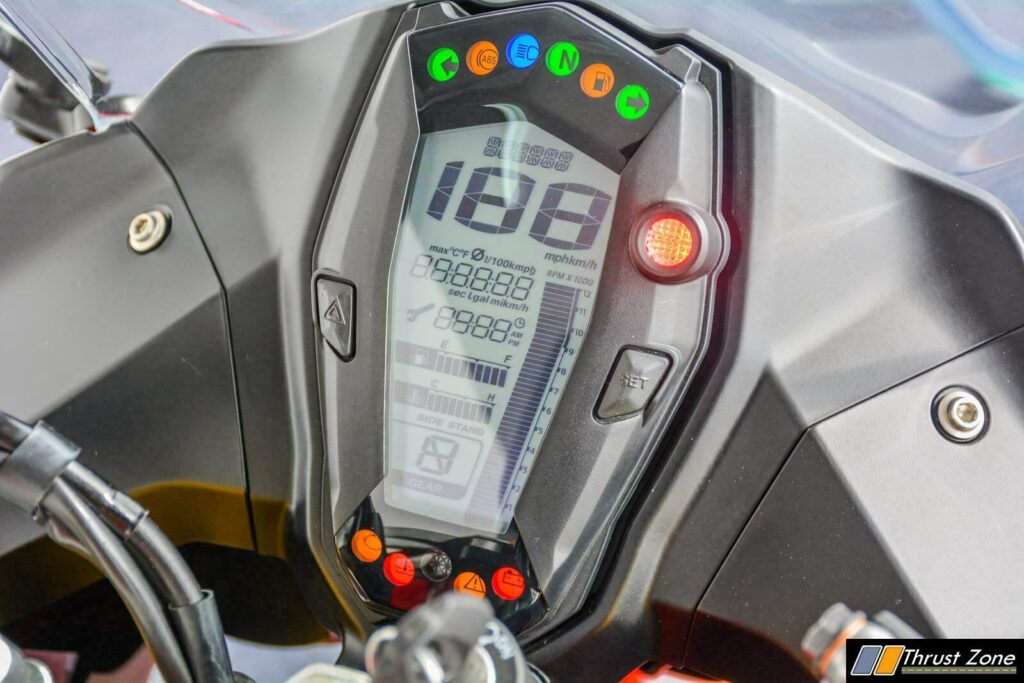 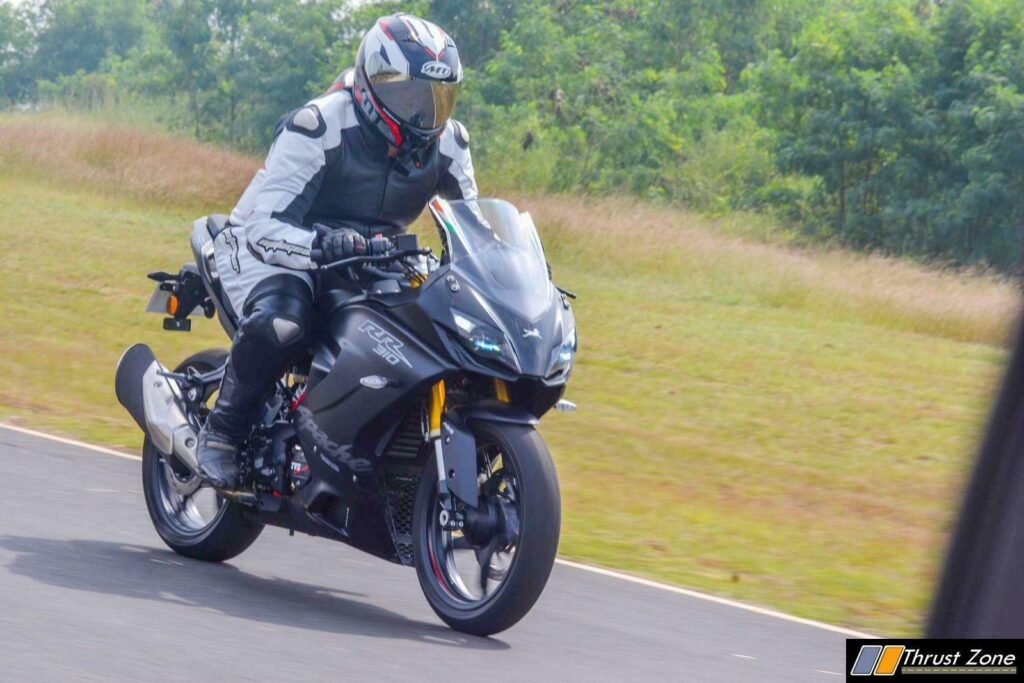 It is a different case when it comes to the seating position which isn’t downright aggressive or committed. The footpegs are almost mid-set, the clip-on handlebars aren’t that low. Overall, riding position isn’t racy but it is more or less designed to be a sports tourer along with providing good handling thoughts with its hardware equipment and setup of the same. 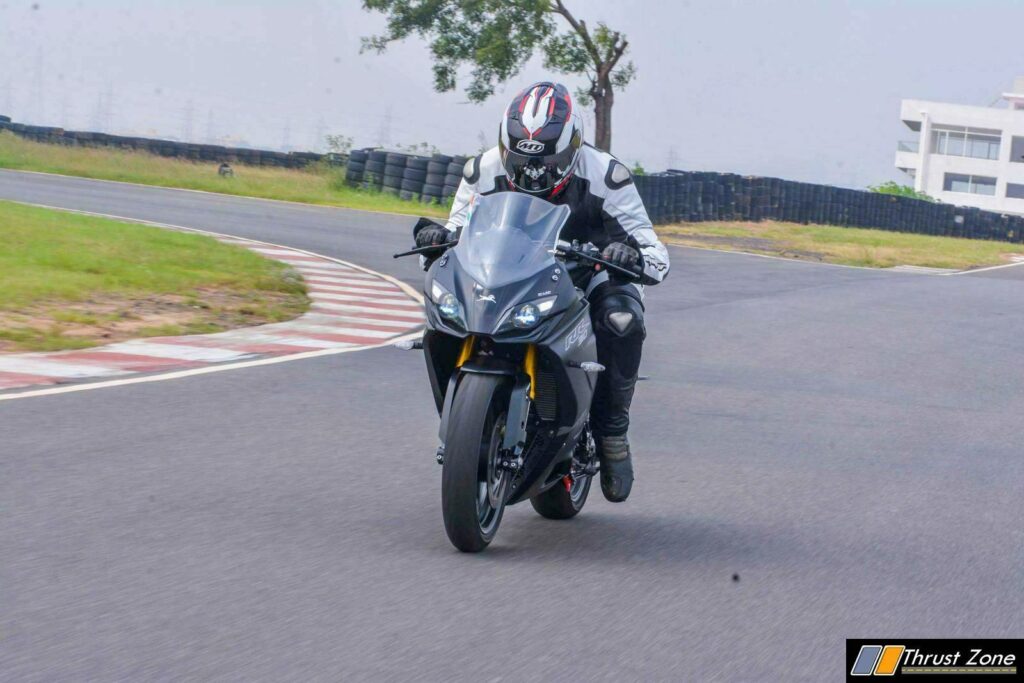 Powering the bike is the same BMW G310R engine. The 312cc engine make 34 BHP of power and 27. 3 Nm of torque. All numbers are slightly short of the donor engine. The motor is revv friendly unit. The motor is almost smooth as there are vibrations in the motorcycle at lower to mid-range but smoothen out completely at the top-end. The motor does make a throaty soundtrack but it does seem like its muted a bit thanks to the new BSIV emission rules. The extremely linear engine doesn’t make exciting but positions itself as a rider-friendly motorcycle. 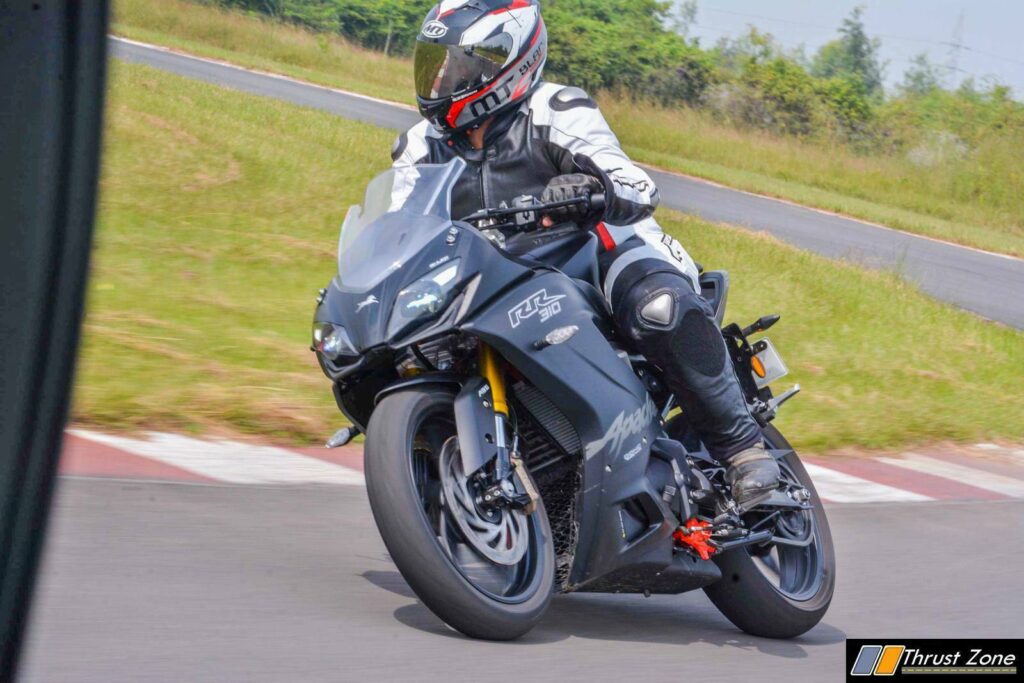 The gearing is on the taller side and ringing the motorcycle till 10,000 RPM isn’t a task. However, the rev range has almost useable torque everywhere, but it doesn’t excite with its performance when compared to its higher spec rivals around the same capacity at the track. However, it should do well with slightly less cubic capacity rivals. Clutch is light, gearbox is smooth and TVS says they have used race spec gearbox to make sure it offers a seamless experience. 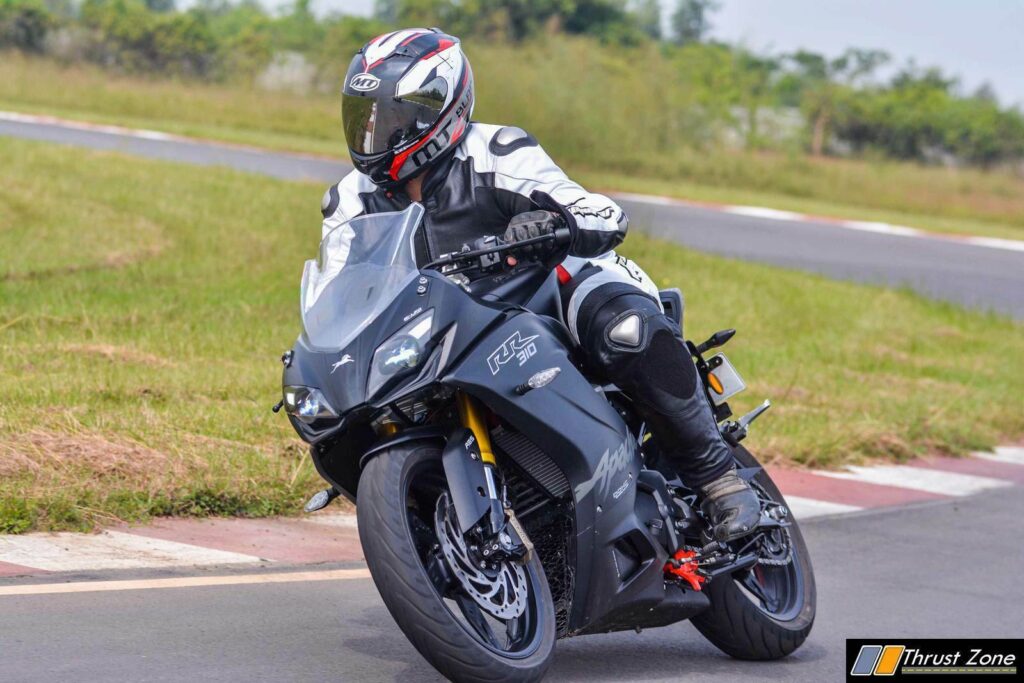 Chassis goodness comes from the way the engine has been mounted. The reverse inclined engine, which means that the head has been tilted 180 degrees, allows less wheelbase and lesser rake angle at the same time leading to a very stable motorcycle in the corners and on the straights. The steering could have been more feedback rich. Also, this is amplified with high sidewall tyres which can be seen on this bike. 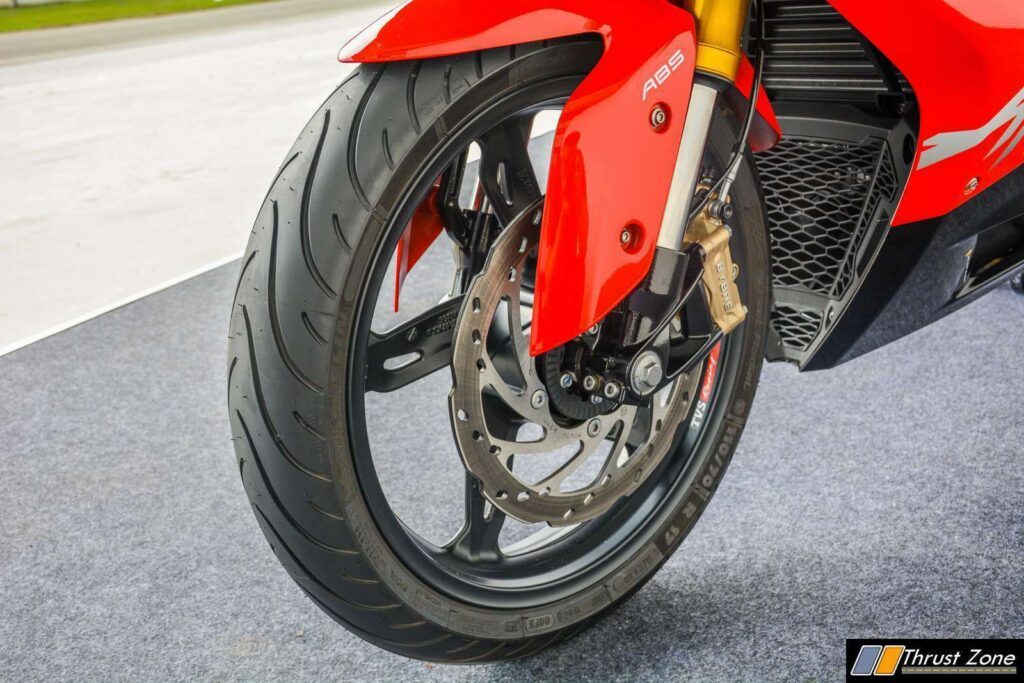 No slipper clutch and not so sticky tyres meant the rear tyre slip when downshifted really hard at high speeds. Brakes were good with superb bite and progressive power. Could do with a bit more bite. Overall, the confidence inspiring nature from the chassis and suspension along with a linear engine helps make it an ideal choice for both, experienced as well as fairly new riders. 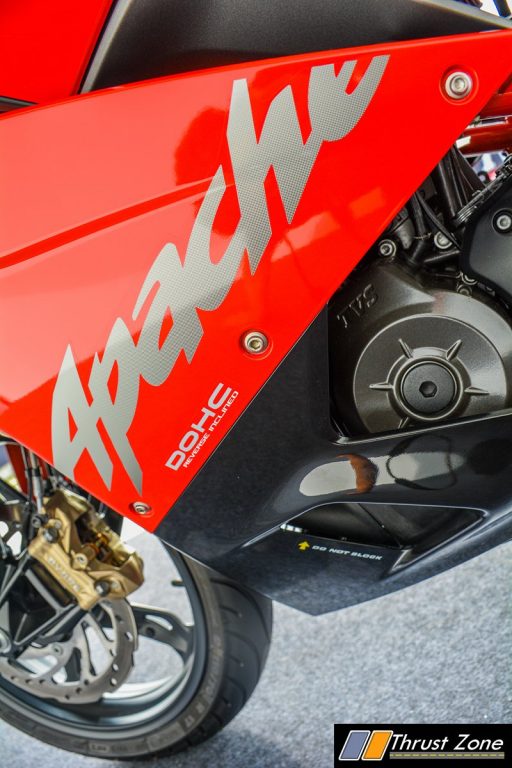 Overall, The motorcycle seems to have a superior setup for the road, but it isn’t super sharp as its rival such as the KTM which also we have ridden on the track. However, they are more committed as well and offer a little less practicality on the road. Like we said, we will like to conclude with the fact that this motorcycle has the intense potential to be a far more superior bike on the road than it is on the track. 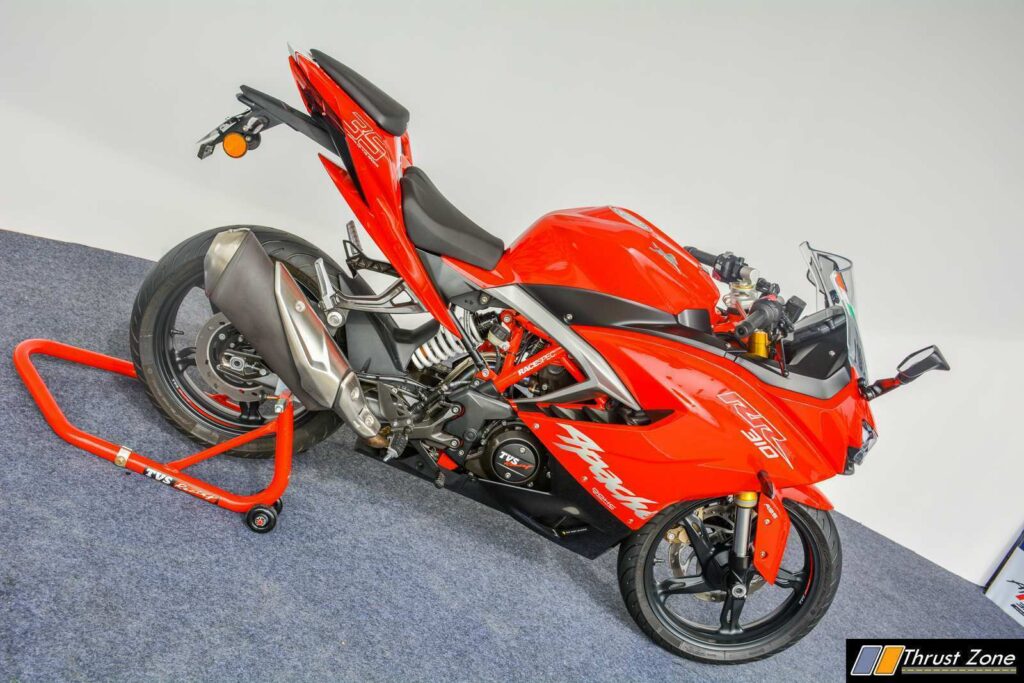 A race-spec bike is on the way and we cannot wait to ride that soon. For now, riding on the roads will help us have a better perspective. TVS does have a great package with a good pricing on offer. It could have had offered more, but the cost would have higher been as well. Hence, the balance has made it an attractive package and all the hype, is worth it.