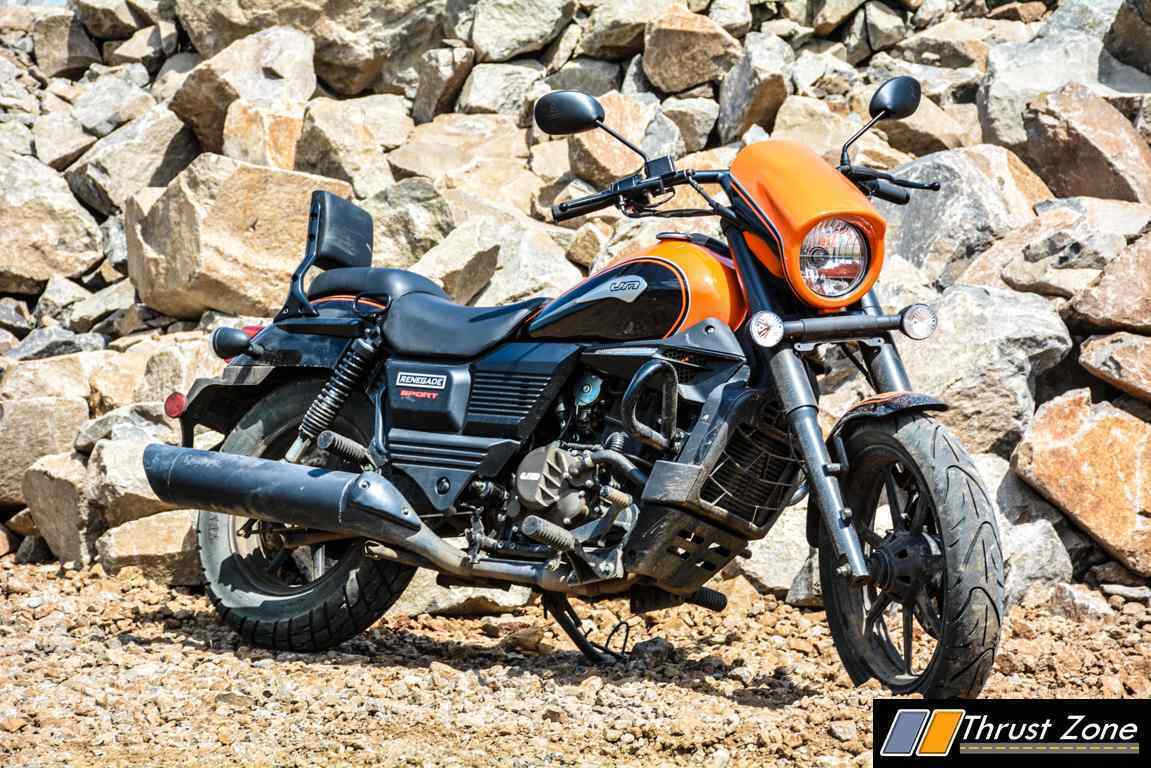 UM Renegade Sports S isn’t a modern-day excellent performer it is a two wheels, an engine and has a heart of a motorcycle and the brain of a cruiser

Cruiser is what as a motorcycle nation demands in the premium space. Cruisers have entered the non-premium market share as well. However, what we have tested today has very little brand value in the market as of today. Hence bare with us as give you an idea of the brand’s history and geography. UM is a motorcycle brand born and bought up in America. The brand was first registered with the U.S. Trademark and Patent Office by in the early 2000’s. There isn’t specific date available either or much more about information about the brand. This makes it one of the most youngest brand in the market today.

A quick heads up! UM motorcycles are manufactured in China for now and designed in the US. Just like your Apple phone, that you are using to read this? Who knows? It could be an iPad as well or a Mac! *ahem* Back to cruisers! Indian UM Motorcycles on the other hand, are made in Uttarakhand with 70% localization. The rest, such as engines and other things come from China. For now, UM motorcycles have ambitious plans in the Indian market today.

The manufacturer has been in the country since 2014 teasing through social media channels its customers and obviously the critics as well. UM showcased itself first at the 2014 Auto Expo and then at the 2016 Auto Expo launching them at good price tags. Post that ands even before that media carrying every single report of the new offering has helped create a buzz in the market. Today we have ridden it. We didn’t road test, but we tested for some time and we have information that you need to take an informed decision. Um, now, let’s find out what UM has to offer. 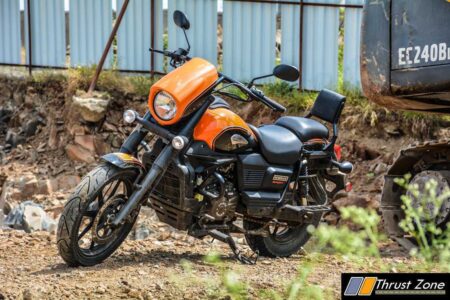 Design First glance at the cruiser you see all the essentials you need. Dig harder you can see the Suzuki Intruder Cowl at the front, which adorns the headlight. There is also a large tank with good paint quality and well done decals. The UM badge is fairly high quality as well. The Renegade Sport S badge on the side panel looks good, but the panel and the one below are flimsy and isn’t a perfect fit.

There is exposed wiring near the handlebar, but isn’t as bad as a ‘PREMIUM’ cruiser maker from the same continent. Chassis welds aren’t the pretty either all around. Fit isn’t something that the company should be proud of, but the finish levels can be judged and they should pass the test too. Plastics are downright brittle and scratchy the one at the tank clearly doesn’t belong there. Plastics all around are just about average. There is a bash plate and radiator cover, which is standard on the motorcycle. 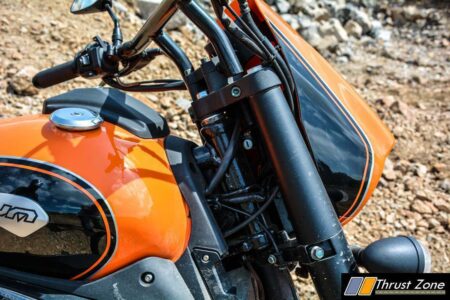 The rear is a strong reminder of the Hyosung bikes. There is a large chunky tail-lamp and turn-indicators are typical cruiser affair, clear and round. Exhaust also is quite similar to the Korean manufacturer. Alloy wheels are something that grabs attention. Again, the redeeming features are the LED lights on both sides of the tank, the beefy front forks which are entirely covered remind you of a big bike. Fat tyres also make sure it looks business like we pointed in the beginning. 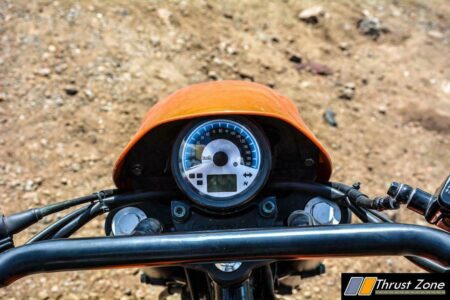 Speedo and Switchgear Speedo on the other hand looks neat, has all the details such as warning and shift lights along with solitary turn indicators. There is no tachometer withe this cruiser for now. There are two trip meters and fuel guage on the display of the tiny LCD. Switch gear quality it cheap too and tactility of the buttons isn’t that sharpest either. There is a choke button on the LHS just like bikes seen in the lower segment. 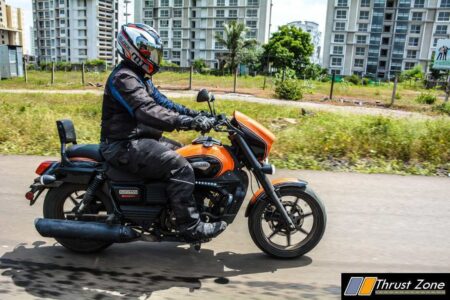 Ergonomics Here is a place where UM could have been dramatically better. The riding position is upright and you get a view of the road ahead as the handlebars are wide and mounted higher as well. For some reason UM chose to put the footrest not completely in the front like its peers. This clearly won’t help much in long distance touring. However, there is a lot of legroom but, again, extremely tall people will start criticism within few kilometers. Footrest reminds us that they have UM branding on them. Seats are just about adequate and it feels a squeeze after some miles into the ride as they are small. Seats should be just fine for average built riders. 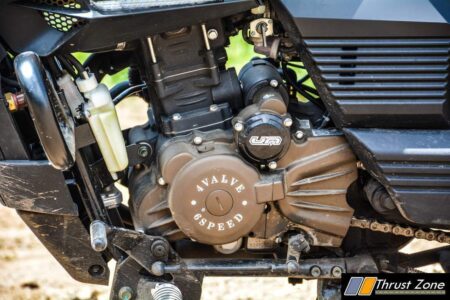 Engine and Gearbox Powering the UM Renegade Sports S is a 279cc single-cylinder water-cooled engine. The motor ends up producing 25 BHP at 8500 RPM and peak torque of 21.8 Nm at 7000 RPM. The motor comes mated to a six-speed gearbox. The power is transferred power to the rear wheel via a chain drive. The cruiser ends up tips the scale at 172kg. For a cruiser, the power and torque is quite up in the power band. The kerb weight is relatively low by segment standards.

You have to rev up the cruiser to make fast progress. Low-end torque is just about adequate and the mid-range isn’t that punchy either. Top-end power is in abundance as the motor pulls in the higher RPM. However, the lack of horsepower despite less kerb weight makes it a dull performer. You can cruise at 100 km/hr and still there won’t be any stress from the engine. Sedate riders aka commuter should be pleased to hear that. 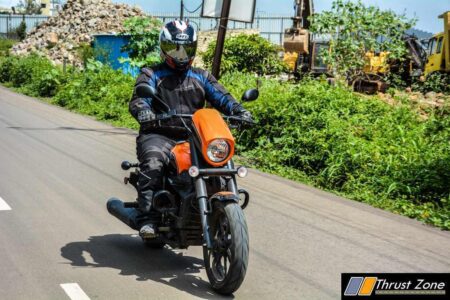 Blame all of this to taller gearing. A well stacked gearbox or a shorter one would have been preferred. This is clearly a motorcycle engine in a cruiser without any efforts thrown in to make it more cruiser friendly. The fat tires don’t take the case further too. Gearbox and clutch is smooth and light respectively. Both could have more progressive with feel as they lack the ‘finishing touches’ over the competition.

NVH levels are surprisingly good, vibrations creep at the top-end when red-lined. Th engine is smooth, revs fast enough and is free revving to an extent. Carburetor engine and liquid cooling is a rare combination, which is increasing, can be seen here. The fueling system provides jerk free fueling throughout the rev range. Exhaust note is a hit or a miss. Keen riders won’t appreciate much of it. Commuters could go gaga over it. The sound reminds of a not so healthy exhaust system from a popular selling motorcycle of the past. 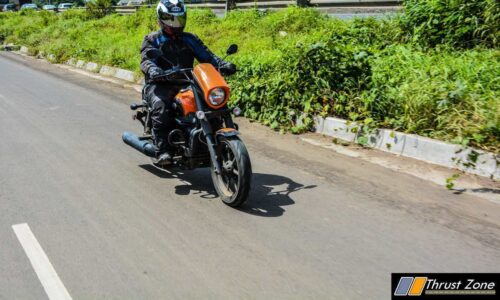 Dynamics This is again, quite a surprise. The chassis feels taut and agile while changing direction. The front-end is raked is steep as per cruiser standard and yet feels agile in traffic. The wheelbase is longer than expected. Turn-in is slow, but post that it is stable in the corners and ride quality is good too. Clearly not an enthusiastic cruiser like others in the corners, but isn’t fun like other cruisers which do better in a straight line thanks to well tuned engines.

Speaking about straight line, stability is good at high speeds and there isn’t anything to complain. Suspension is on the stiff side, but plush enough to offer good ride quality over broken roads. Brakes at the front are mediocre. Don’t expect ‘initial’ bite or feedback, but expect good progressive braking power. Rear brakes weren’t working at all on our test bike. TVS tyres aren’t known for offering best performance, but did a fine job on dry and off-road tarmac. Overall, nothing sharp or exciting, but it gets the job done. 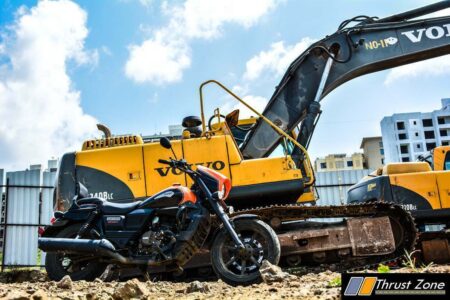 So is the UM Renegade Sport S a proper bad motorcycle in the market today? Definitely not. It isn’t exciting, sharp or fun to ride as they are cruisers. We will wait for ‘motorcycles’ that UM brings out in the future. Being hard on them for quality is justified to an extent as the market has grown up, but it still ends up doing its job really well.

The Renegade is nimble, agile, peppy enough for city use, can do highway stints as well. There are still things remaining and that is called a road test. Let’s get back at home base, put it through known alleys and highways and then we will give you performance and fuel efficiency numbers as well. For now, the pricing, the commuter appeal and something unique awaits you if you are in the market for cruisers in the same price bracket. 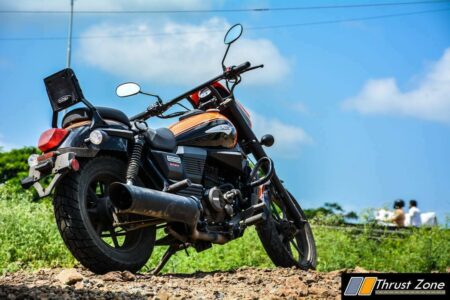