Volkswagen Virtus Seen On Road After Reveal – Looks The Business! 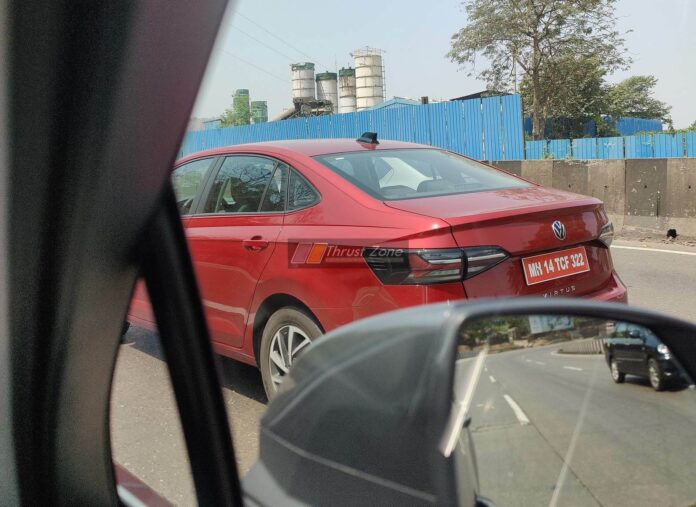 Volkswagen Virtus was revealed in early March 2022 and it took the internet by storm. Largely, a digital launch, this is the first time it has been seen on public roads doing tests. As it gets ready for global export what we see here is the left-hand drive car being driven on the Mumbai-Pune expressway. As you can see, it does look something special as it seemed to look on stage. Rear tail lamps grab attention in the way they are done with the arrow shape for the illumination part and blackened out look for the rest of the lamp. The side profile is sleek and sharp and the front end just ends up looking a modernized version of the existing VW Passat. There are a lot of details missing on this car such as dimensions and how the variant structure would be apart from the fact that there will two car lines to choose from Dynamic and GT. Volkswagen MD did say there will be a lot of standard features which means either it could very good value for money or slightly pricey than its recently launched cousin, the Skoda Slavia.

The Virtus has the design card against most of its rivals and its cousin too and it will have an advantageous role to play in the sales at the end of the day. The Virtus will be powered by a 1.0 litre and 1.5 TSi motor mated to 6-speed manual and 6-speed torque convertor and 7-speed DSG respectively. The rivals include Hyundai Verna, Honda City and Maruti Ciaz. The reveal to the public and press will be later in the month of April and to be followed by a launch in early May 2022. Have a look at the picture and get ready for a car that can shake up the sedan market as the Virtus design is set to win hearts rather easily than anything else on the market right now.