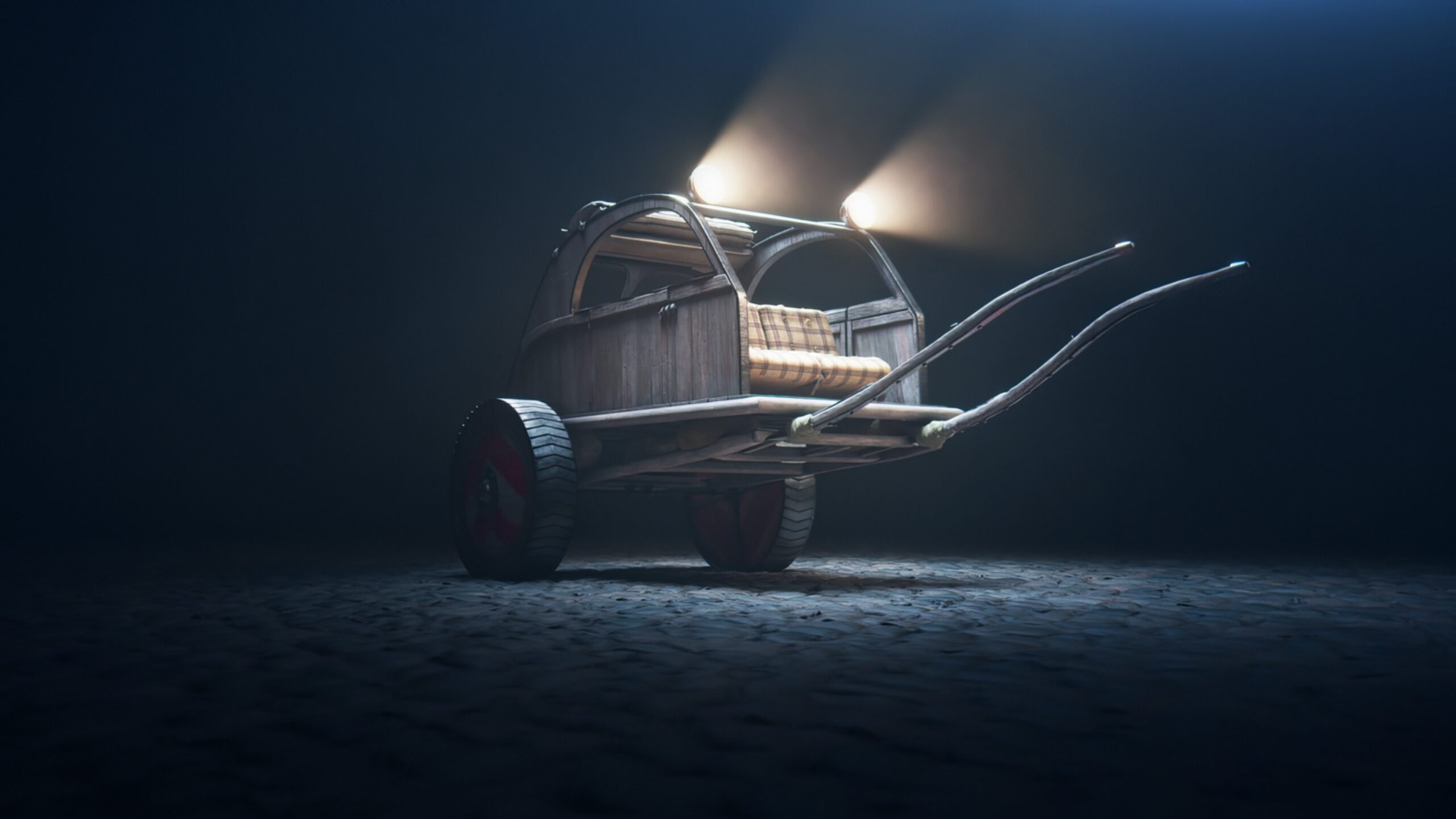 Citroën and Pathé, Trésor Films and the Editions Albert René are kickstarting their partnership with the upcoming movie Asterix& Obelix: The Middle Kingdom. Produced by Pathé, Trésor Films and les Enfants Terribles, the film is directed by Guillaume Canet and will be launched in movie theatres in France on February 1st 2023. The movie will be released internationally shortly after.

This partnership is unlike any other which Citroën has had. This partnership has involved the design and creation of a concept chariot by Citroën specifically for the needs of this movie, something unprecedented for the brand. The design teams of Citroën were implicated in this project from the very onset, and they pulled off something incredible — they designed and built the chariot within 3 months, whereas the timeline for the sketching and manufacturing of a concept is usually 1 year.

Indeed, the 2CV is a car which is part of the French cultural heritage. Its silhouette is recognizable anywhere in the world. The 2CV represents the French way of life for many. In the movie Asterix& Obelix: The Middle Kingdom, the “concept chariot” is a reinterpretation of the 2CV and it is representative of the Gallic way of life. The design teams at Citroën did a reinterpretation of the brand’s DNA core values of comfort, technology and bold design and added a special touch for the Asterix movie. The result is a concept chariot with suspensions made of boar’s stomach, a sunroof, headlights, taken from Gallic helmets, operated by fireflies boosted with the magic potion, wheels made of recycled shields, incorporating Citroën’s chevrons.

A lot of thought has gone into the creation of the concept chariot for this movie. There are several sequences where this is illustrated. The sequence where the heroes are about to leave their village to go to China shows a team which is united and heading off for a great adventure. Before they set off, Cétautomatix presents the chariot to Obelix and shows off the latest innovations which he brought to it so that their trip goes as smoothly as possible. Further in the movie, when Cesar’s army reaches China, there is a first advertising billboard at the entrance of the country promoting the best car at the time: the 2CV, an incredible chariot made in Gaul, pulled by 2 horses. This is a subtle allusion to the famous Citroën advertising film made on the Great Wall of China. 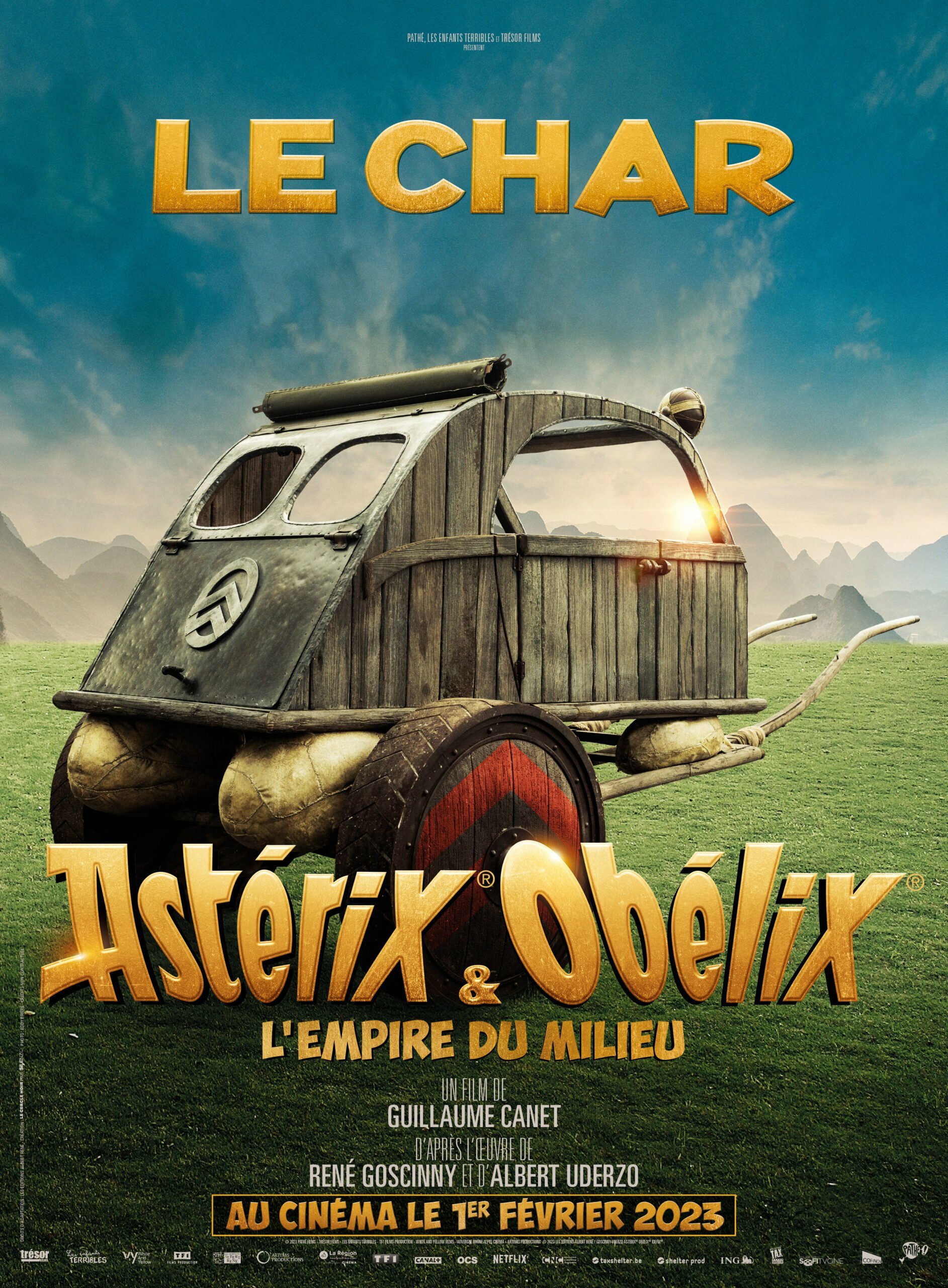 Finally, to underline the strength of this partnership, the new Citroën logo comes to life and sports the wings of Asterix’s helmet for the occasion.The ‘behind the scenes’ constitutes a significant component in this partnership. Citroën provided the team with an entirely electric fleet during the shooting of the Asterix movie. The fleet was made up of 10 vehicles: 3 ë-C4, 3 C5 Aircross PHEV, 2 ë-Spacetourer, 1 Ami and 1 ë-Jumpy. Citroën also helped with the covering of charging stations for those vehicles on the filming sites of Bry-sur-Marne and Bretigny-sur-Orge.

Sustainability was a key aspect all throughout the shooting of this movie. The electric fleet provided by Citroën was the Asterix team’s effort to contribute to decarbonization. The team worked with an agency which implemented some processes to limit waste as much as possible. For example, the costumes were recycled and reused for other purposes, the cardboards were recycled which resulted in the saving of 2 tons of wood. Also, all the wooden crates were given to two urban farms in the Ile-de-France region.

“At Pathé, it is the first time that we shot a movie using such an important electric fleet. Citroën helped us with the installation of the TOUTELECTRIX charging stations in the colours of the Asterix film. This electric mobility mode was of course an adaptation for many of us, but our team rose brilliantly to this challenge. Building on this successful experience, we are confident to replicate this disposal during our next productions.“ adds Yohann Stoll, Head of Brand Partnerships & Sponsoring, Pathé Films.

Both Citroën and the character of Asterix are household names which are ingrained within the French culture: Citroën is an automotive car manufacturer created by André Citroën in 1919 and the brand has marked the history of the automotive industry from the Traction, the 2CV to the CX. Today, Citroën is paving the way for the mobility of tomorrow with the non-conformist object Ami or with its latest concept car, oli. Asterix is a French comic book series created in 1959 by French screenwriter René Goscinny and the French cartoonist Albert Uderzo in the French newspaper Pilote. The Albert René Editions own and manage the rights to the adventures of Asterix. The company publishes the comic books and sources new projects on Asterix, particularly films and cartoons. To this date, there have been 385 million albums sold in 111 languages and dialects globally.

The first adaptation of Asterix for cinema was in 1967 with the movie Asterix the Gaul, directed by Ray Goossens. To this day, the Asterix saga comprises 15 films and cartoons, with over 25 million of viewers in France and over 70 million worldwide. It shares with Citroën the incredible ability to bring together all the spectators with an unbridled sense of comedy, the manufacturer being one of the rare car brands that uses offbeat humor to convey its messages. Finally, the long journey of Asterix and Obelix in China is reminiscent of Citroën’s Central-Asia mission, also called the Yellow Cruise which took place from April 4, 1931 to February 12, 1932, linking Beirut to Beijing. It was the third expedition of its kind by car on the initiative of Citroën, after the crossing of the Sahara and the Black Expedition.

The film will be released on February 1st 2023 in movie theatres in France first, followed by a worldwide release shortly after.

The teaser of the movie Asterix et Obelix: The Middle Kingdom is available on the link here: https://youtu.be/1xl2JAgmkqY

The link to the concept chariot is available here: https://youtu.be/q-Xg6LBeqg4