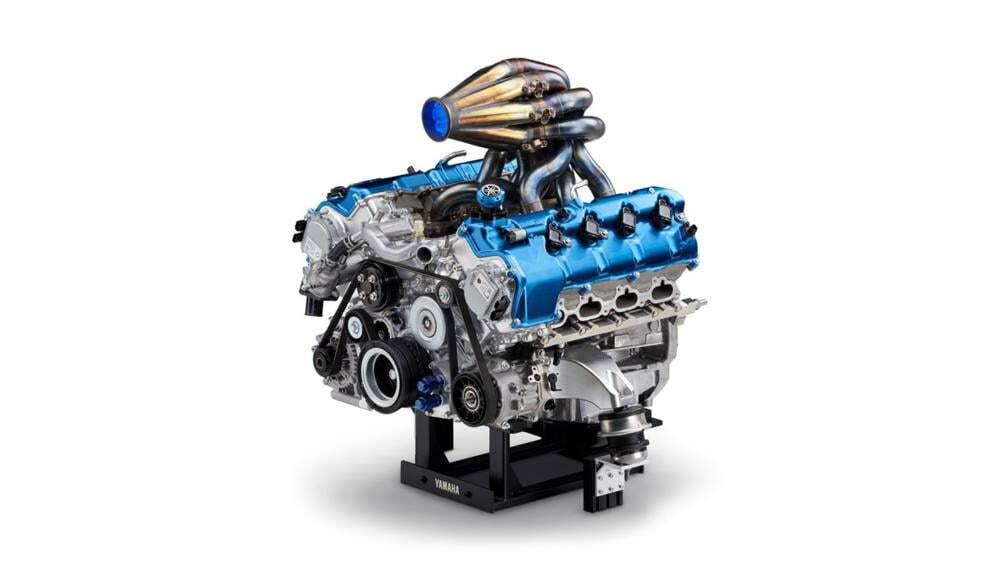 Yamaha Motor has been commissioned by Toyota Motor Corporation to develop a 5.0-liter V8 engine for automobiles that is fueled entirely by hydrogen. In Japan, Toyota and other automotive-related companies are about to begin a collaborative effort to expand the range of fuel options for internal combustion engines.

As Yamaha “Motor,” the Internal Combustion Engine Is Dear to Us
“We are working toward achieving carbon neutrality by 2050,” explained Yamaha Motor president Yoshihiro Hidaka. “At the same time, ‘Motor’ is in our company name and we accordingly have a strong passion for and level of commitment to the internal combustion engine.”

In November last year, the five companies of Kawasaki Heavy Industries, Subaru Corporation, Toyota Motor Corporation, Mazda Motor Corporation, and Yamaha Motor jointly announced they would begin discussions for conducting collaborative research into possible avenues for expanding the range of fuel options for internal combustion engines in the quest for carbon neutrality. And at the announcement venue, the V8 hydrogen engine shown above, which was developed by Yamaha for Toyota, was unveiled to the public. The unit is based on the 5.0-liter engine in the Lexus RC F luxury sport coupe, with modifications made to the injectors, cylinder heads, intake manifold, and more, and delivers up to 450 hp at 6,800 rpm and a maximum 540 Nm of torque of at 3,600 rpm.

“Hydrogen engines house the potential to be carbon-neutral while keeping our passion for the internal combustion engine alive at the same time,” proclaimed President Hidaka at the venue. “Teaming up with companies with different corporate cultures and areas of expertise as well as growing the number of partners we have is how we want to lead the way into the future.”

Yamaha began developing a hydrogen engine for automobiles about five years ago. Takeshi Yamada from the Technical Research & Development Center’s Automotive Development Section is a member of the hydrogen engine development team and he began to sense the depth of potential in the powerplant as the project progressed.

“I started to see that engines using only hydrogen for fuel actually had very fun, easy-to-use performance characteristics,” he explains. “Hydrogen engines have an innately friendly feel that makes them easy to use even without resorting to electronic driving aids. Everyone who came to test-drive the prototype car would start off somewhat skeptical, but emerged from the car with a big smile on their face at the end. As I watched this, I started to believe that there is actually enormous potential in the characteristics unique to hydrogen engines instead of simply treating it as a substitute for gasoline.”

Another thing that Yamada and the team value in the development process is Kanno Seino, meaning sensual or exhilarating performance. One example is the harmonic high-frequency exhaust note produced by the engine’s 8-into-1 exhaust manifold. “This is a challenge we can sink our teeth into as engineers and I personally want to pursue not just performance but also a new allure for the internal combustion engine that the world has yet to see,” declares Yamada.

What he and his fellow engineers believe in is the potential of a fully hydrogen-powered engine. Working together with his gradually expanding network of partners, Yamada undoubtedly feels they have one hand on the door to unlocking that potential.