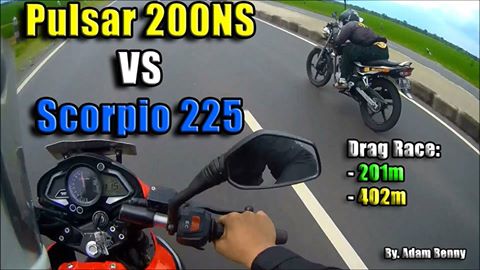 200NS vs Scorpio 225 aka Karizma has been modified a bit to make more power, 200NS manages to keep up every time

In a video which showcases two popular motorcycles from Indonesia drag racing showcases interesting results. The Pulsar NS200 is exported to many countries and it is in Indonesia where it is also popular. It has been doing well in the country despite the fact that Indian production was shut down for two years in the country where it comes from. Nevertheless, the popular NS200 is known for its practicality and flexibility that it offers in every way. Straight line performance, touring, dynamics and excellent chassis bits on offer.

It has to go against its rivals and in India it is now the FZ 25 and Apache Duke 200. It also had something called the Hero Karizma till he motorcycle was in production as its competitor. Here in the race between the two, it is clear mentioned that the NS200 also has an exhaust system on it while the Karizma aka Scoprio 225 has a polished ports and other bits here and there to make a bit more power. We assume it makes 3-4 BHP more which makes it very close to the 23.5 BHP Pulsar 200NS. Karizma as stock also makes 18 BHP and so does this Indonesia Scorpio 225.

In the drag race of 200NS vs Scorpio 225 we can see all the times that the Pulsar NS200 takes a slight lead in the 200 meter race and keeps it till the end. Karizma is always on its back in this 200 meter race. The Scorpio with a lighter riders makes it more difficult for the NS200 but it manages to win all races. 400 meter race see NS200 winning, but in the end, a right launch from Scorpio sees itself beating the NS200 while it looks like the Pulsar did not get the right launch and was left way behind. Look at the video below.