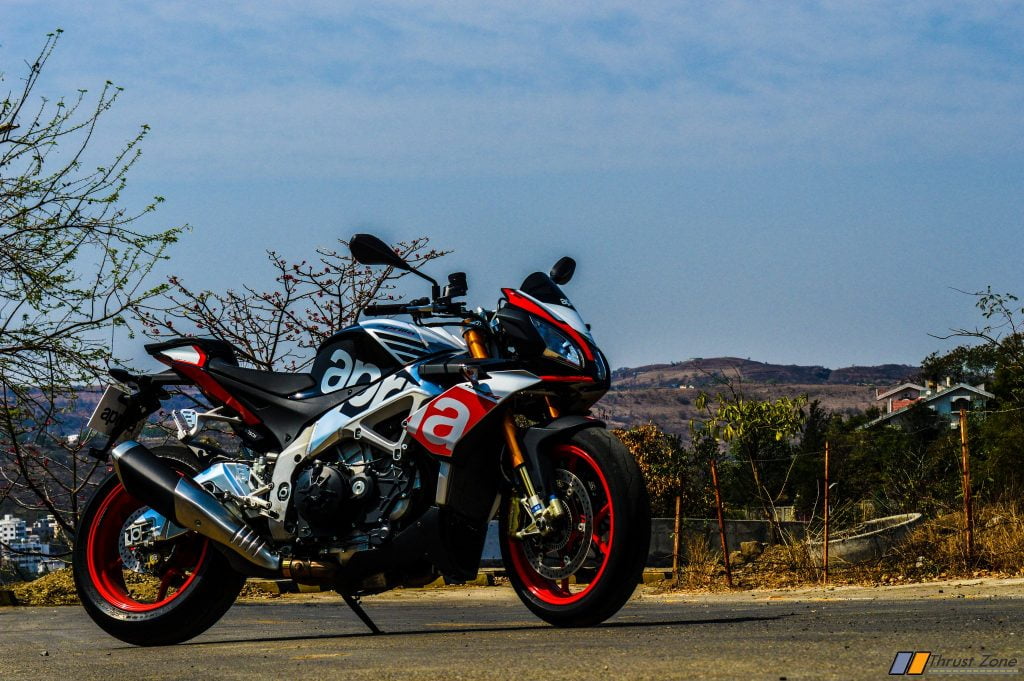 2016 Aprilia Tuono 1100 Factory has to be the best, perfect and special super naked in the market today available at a price tag that is hard to ignore

Let’s get something right at the beginning. There are few things everyone wants to do, which today, in the world of millennial is called bucket list, life goals etc. We called it the dreams in the 90’s. Dreams that were set to come true one day, we were waiting for it endlessly. As motorcyclists our goals have been to get astride as many motorcycles as possible before your body gives up. Fast forward 2006 when i started looking around the internet and was looking for motorcycle, scooters and music, there were two bikes i saw that for unknown cosmic reasons just appealed me more than Cindy Crawford. The Kawasaki ZX-10R and the Aprilia RSV4. I just imagined at point how four-cylinder engines can be mounted in a different way. Research displayed me quick facts that the V formation produces more torque and inline one’s are horsepower oriented. 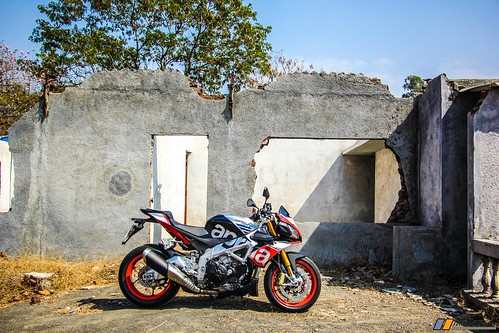 Since we love both, I feel in love with these two motorcycles. Later in time, in 2009, I saw the Aprilia Tuono, the naked motorcycle from the same brand and the same motorcycle that it has been derived from that I dreamed of. Immediate connection was made again, because back at home I was riding naked motorcycles, called the Bajaj Pulsar. Since then, patiently waiting for this motorcycle to come to this market and I could just look at it and hear in person till today, when I finally rode it. Yes, it is a special motorcycle for me, you can guess that for sure now, can you? Allow me to explain in the few words how this mean machine is a captivating piece of art, which seems to have a heart of a human somewhere hidden in the motorcycle. 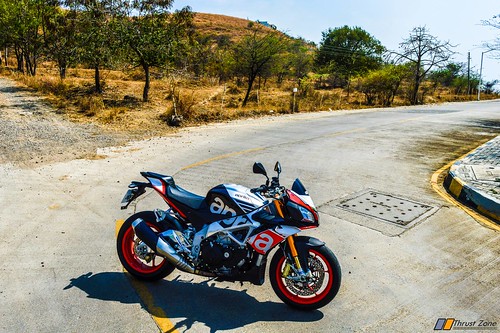 Styling The motorcycle is quite a looker and attention grabbing machine for a naked motorcycle. In our country where fairing is the next best thing after Sachin Tendulkar, aka I meant GOD, this actually gets the special attention that it deserves. Race livery, Name plastered from the front of the motorcycle to the tank. Ideal silver, black, grey and red color combination has been never so perfect. Almost Chrome swingarm adds bling to the bike. 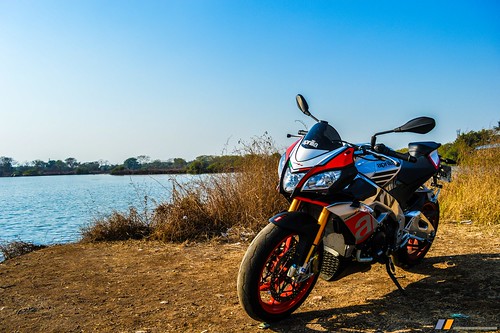 Three pod headlights in the front is a unique trait for this motorcycle and two-wheeler worldwide. It does help a lot in the night as low beam and high beam can be used together. Illumination and spread are top class too. Gold color front forks and rear suspension add a bit of flavor, but does get missed in all other details. Overall, fit-finish is good, quality of materials is on par and it’s feels built to last. 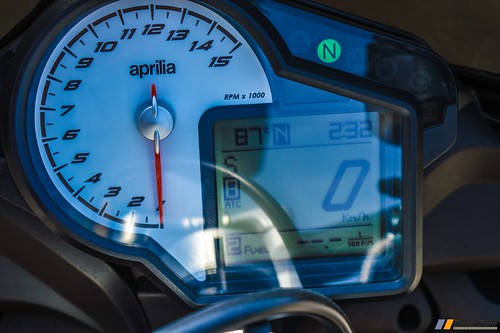 Speedo and Switchgear: This may take some time getting used to. Switches aren’t exactly everyday thing that we see. To start the bike, the red button should be in ON position and then you can fire up the engine use the starter switch. Right side is something of the concern. The traction control button is where usually every motorcycle has its horn button. So you have to be careful while doing so, or just rev at fellow traffic mates to get them out your way. High beam, and pass light button are the same so that’s a best part of this package. 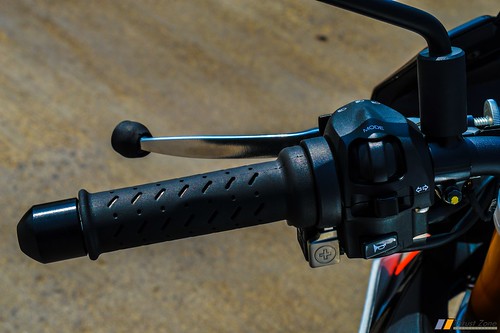 Mode button on the right side allows you to fidget with the APRC settings. Speedo has an analogue tachometer and a digital speedo meter which has average and live fuel economy along with distance to empty, engine temperature, APRC settings which has the entire counter to keep the designated level of ABS, traction and wheelie control. 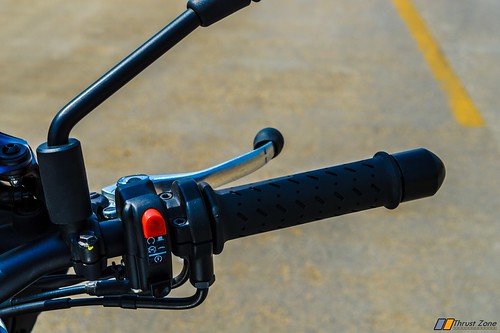 All of them can be assigned differently as well and turn off all together too. There are tell-tale lights, service indicators, traction control light too. 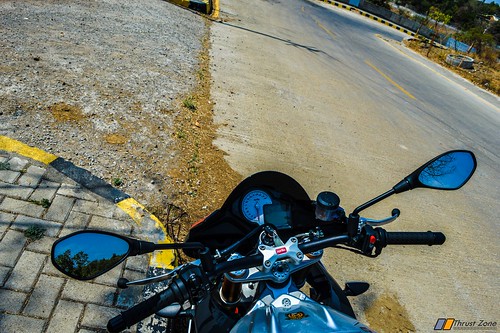 Ergonomics The Tuono is one big surprise. I rode my KTM Duke 390 to Pune from Mumbai to collect the Tuono and my bum was paining slightly as I reached Pune. While coming back, the Tuono seat was generously well padded that the miles just went by without any discomfort. The stress free ride was also due to lots of legroom for my 5’11 height with boots. 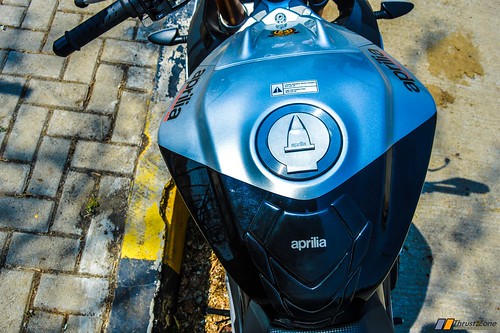 Riding position though was a bit awkward at start because pegs are high and bars are low, it seems like clips on were removed, handlebar was placed and off you go, the Tuono is ready. However, its more than that and after some miles in the saddle, it felt normal. Mirrors also work well and show what is behind as if you care or bother to look behind on this fast motorcycle. So that solves the comfort, it stands true to the naked motorcycle regime of offering practicality. 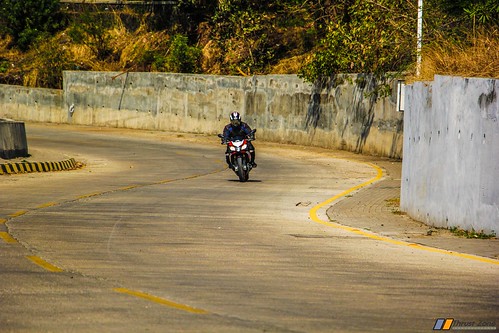 Performance: Engine is the star and the soundtrack is the universe of the Tuono. The motorcycle stays true to the name, the name translates from Italian to English as Thunder. This is a freaking lightning bolt indeed. Powering the engine is the 1100cc engine which was bored up recently. The engine now makes 175 PS of power at 11,000 RPM and 121 Nm of torque at 9000 RPM, which is lower in rev range for its naked motorcycle character over the RSV4. There is enough grunt under 6000 RPM to make city duties friendly. The clutch is light and gearbox is smooth shifting unit as well. Once past 6000 RPM, the motorcycle just goes, with the rumbling sound track that I have waited to experience almost a decade. 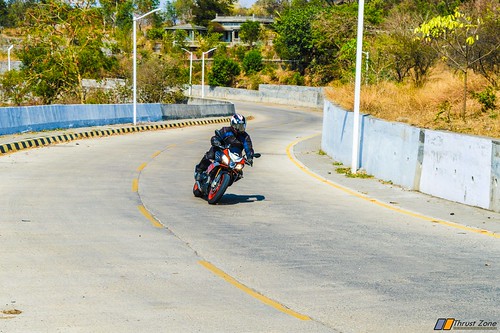 It sticks to its soundtrack even after all this years. It’s a feat and every journalist in the world is surprised how Aprilia has managed to do so. Post 8000 RPM it sings like a four-cylinder engine making a lot of horsepower and it is a delight too, but not as good as the rumbling below in the rev range. The soundtrack is loud, angry, tamed and has an constant echo all the way. The soundtrack is the most different one than the Japanese motorcycles that we are accustomed too and hence that is also a reason it grabbed a lot of attention. 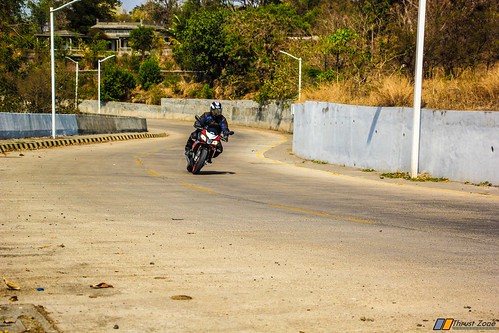 Gearing wise, the power band is on the narrower side than the sport bike as the redline comes earlier. The gearing is shorter than usual which means the power band and gear ratios are perfectly in sync. Every time you shift up or down you find yourself in the right place at the right time. You have to keep shifting now and then as this isn’t flawless inline, but a growling V4 four-cylinder. Riding the KTM and Tuono back to back felt that this is just many times more powerful, everything else was similar, the dual powerband, the gear shifts now and then. We did manage to fill the tank thrice and we got an average efficiency of 22.8 km/l. Decent considering the performance and the kind of testing it went through. 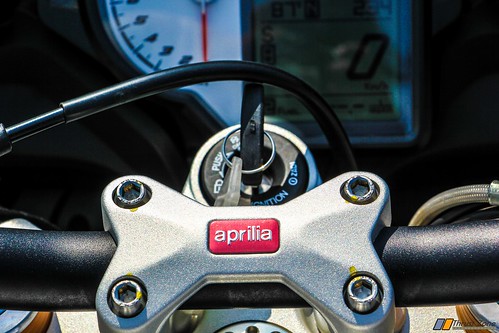 Electronics: What is surprisingly good fact of this that the Tuono is very easy to ride, the engine is smooth, tamed and doesn’t go haywire or the front doesn’t keep popping up thanks to array of electronics. Launch control, wheelie control, 8 level of traction control is just the beginning, the three riding modes makes things make things so much easier to control that you can be brave enough to keep traction level at 3-4 and enjoy wheelies from time to time. The wheel comes down automatically which is thanks to traction control level determination. 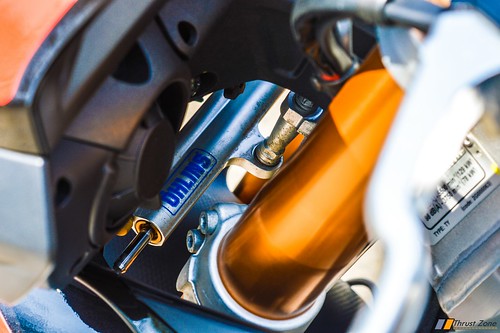 The 8’th level of APTC is the most intrusive and the lights are constantly blinking on our less than perfect roads when you open the throttle. Set 6 for ideal fun, 4 if you are feeling brave and 1 if you think you can challenge physics. We hardly got to test the quick shifter since we couldn’t shift at redline through the journey. Traffic that is. Third world problems. 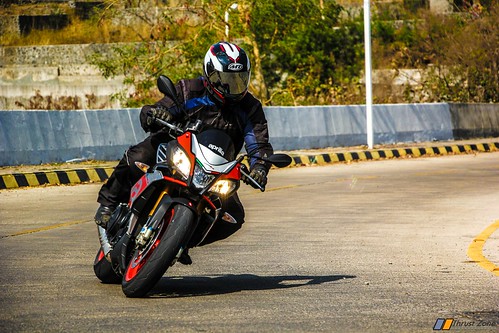 Dynamics: The reason the Tuono blows away every single motorcycle in the competition and plants a huge grin and endless praises from the journalist worldwide is the way it turns direction. Sides to side flings are so nimble, poised and stable that you forget you are on hatchback sized engine motorcycle. Turn ins are super fast, rake and trail is adjustable, our test bike had rake outward which was balanced enough for city and highway duties. 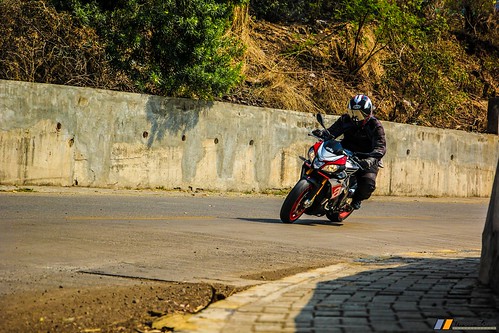 Slicing through traffic wasn’t a problem at all. Keep it in lower gear and change directions it won’t complain at all and will get you out of situations. What is the better part is the ride quality and stability. Thanks to aerodynamics and fairing panels kept, it is rock stable for a naked and even at 200 km/hr, there isn’t so much windblast, which is forcing my helmet of my face. 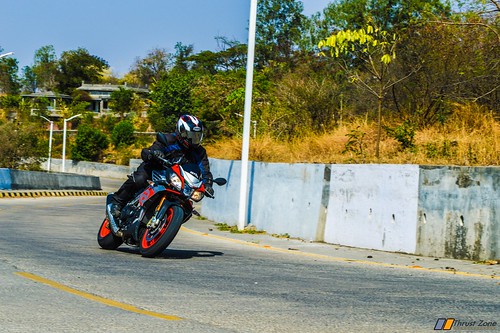 Ride quality on broken roads is fantastic. Underlying stiffness obviously exists, but it doesn’t throw you off until unless you up the preload and compression on the rear suspension. We did that and immediately saw the bike becoming bumpy and felt it wanted to go to a race track. Unloaded the setting to what it was and the bike became magical all over again. Ohlins suspension does it job really well and there is no doubting that. Another best part is the HIDDEN steering damper under the handlebar instead of above it. 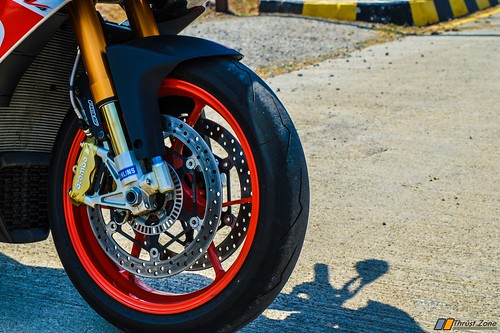 The damper does a remarkable job of keep the front planted once the front-end lifts of or the road situations try to make the front-end flighty and scary. Taking U-turns isn’t that bad as hardcore litre class bike, the steering lock width is bigger than that bikes we tested in the past and surprisingly it feels quite light at parking speeds as well. 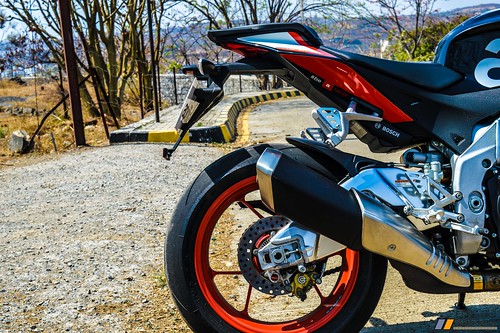 We are stunned on how everything falls in the right place at the right time, because humanly, we have never seen a bike which has everything an enthusiast needs. Usually while testing, the tyres are not in great conditions but since they were, it was a great fun to push the bike a little harder than we usually do. Which reminds me is that the Pirelli tyres are brilliant are grippy and stable in all road conditions. 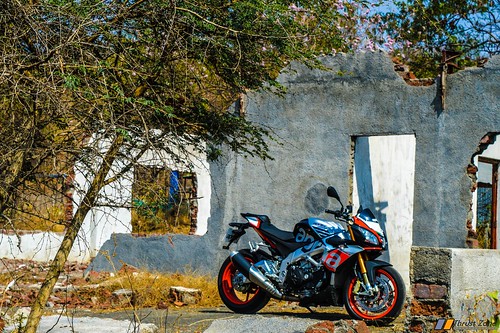 Verdict It’s quite simple then, the Aprilia Tuono 1100 Factory manages to impress on every single count and that is a feat something which rarely motorcycles do, which makes it high praise. I don’t want to start again how mind blowing the engine is and how the chassis is as easy to play around as a 600, thanks to pin point precise the electronics. Usually, there are compromises, but with this one, here in India, the only thing is the price. At around 23 Lakhs on-road Mumbai, it is expensive for what it is. 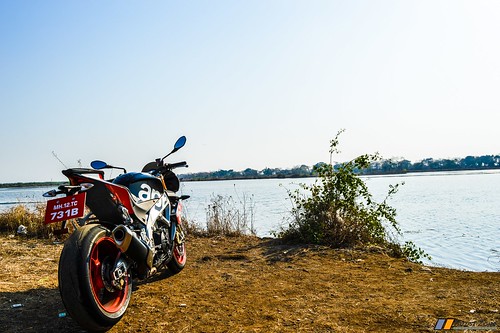 The competition hasn’t reached either to say where it aces the price comparison or not. Aprilia tells us that the parent Piaggio company in India helps in this case and hence we don’t pay double the price despite this is a CBU unit like for example, the Ducati Panigale, which cost over Rs. 40 lakh and that makes this motorcycle a steal. Supernaked price tag seems to be spot on, but still far away from the reach of the real enthusiast. Better start saving by eating Sadguru’s Pizza instead of Pizzahut Pizza to get onboard on the Thunder Italian Buddy here! 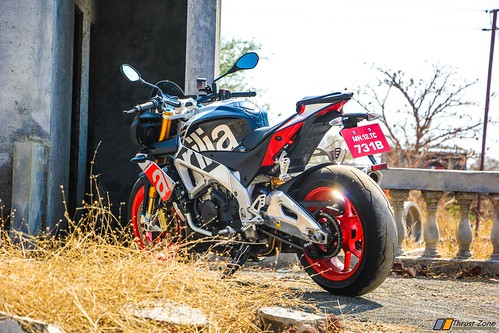 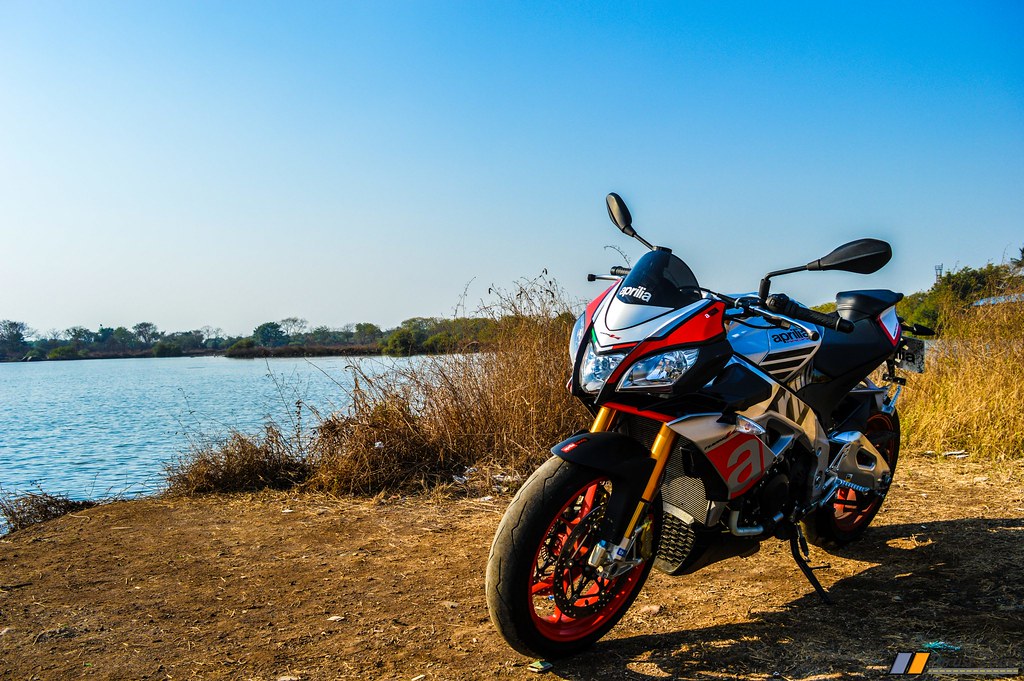 Maharashtra Two Wheeler Registration Prices Up For All Classes