Chevrolet in India hasn’t had much success. The manufacturer has sold vehicles in all categories such as MPV, SUV, D-segment sedan, hatchbacks and compact sedans. After not much of these products aren’t rolling out of showrooms, the manufacturer has taken some serious steps to make sure products do roll out as much as they can. GM has decided to put in One Billion Dollars into Indian subsidiary along with revamping two of its factories which are located in Maharashtra and Gujarat.

To begin with this, it showcased two products such as the TrailBlazer and Spin. Spin isn’t coming to India, but as promised the TrailBlazer made it. The large SUV is quite famous in the Asian market and back in the USA as well. Priced really well, it is on sale for some time. We spend some quality time with this giant to tell you does it have everything it takes on strong rivals. 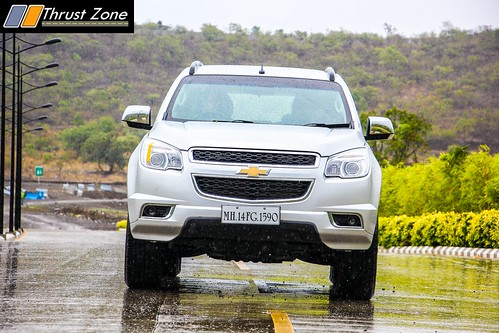 Styling wise, the TrailBlazer has been winning hearts. The TrailBlazer is one of the few products that can be seen on roads more often. The mammoth size of this SUV is captivating. It shunts down its rival such as Fortuner and new Endevaour by a ‘HUGE’ margin when it comes appeal. The TrailBlazer is as big as the Pajero and hasn’t beat the old brute, but comes neck and neck with it. However, the lines are quite simple, all around. Large wheel arches, simple Chevy bow-tie grille at the front, not quirky at the rear makes it quite an understatement. 6-spoke, 18-inch alloy wheels along with large doors and large windows make sure it has the visual mass to dominate roads and lend it a ‘premium’ tag. 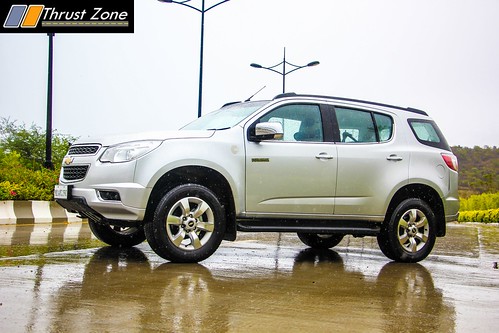 C-Pillar which extends to the D-Pillar and joins the rear windscreen is the highlight of this class of SUV’s and the TrailBlazer has it. Large and chunky tail-lamps which are LED make sure it has a bit of flair that captivates a lot of buyers quite easily. A combination of width, height and size along with clean lines is the reason the TrailBlazer is bound to succeed in the Indian market. 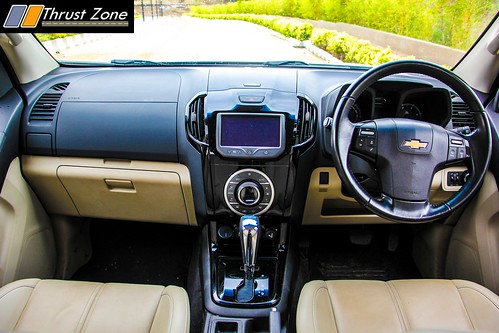 Surprisingly, every SUV in this price bracket and category suffers from interior quality. However, at first shot, the TrailBlazer isn’t disappointing. GM has done its homework and given its best in the segment. The plastic quality is good and fit-finish levels are good, but could be excellent as slight bit such panel below the steering is loose and top-part of the dashboard could be a proper soft touch unit and not just a minute.

Equipment scarcity is the reason the TrailBlazer could be a downer for this category. However, thanks to the lack of equipment, it looks like GM has got this price. Things such as illuminated switches, sunroof, front parking sensor, keyless start, passenger power seats, auto folding mirrors and ORVMS, reach in the steering and other bits are missing. We liked the lights and fog lamps which have projectors as well that makes illumination really good as the spread is already impressive.

However,it does have a large 7-inch touch screen with Bluetooth, AUX and USB. The sound quality is good for stock speakers as well. Steering mounted audio control, cruise control, automatic climate control and traction control are available. Siri is also available in the touch screen unit and so is audio commands attached with the Siri so Apple owners can enjoy it hands free. Mid and meters can be operated through the stalks as it has a menu button on the right one. Average and current fuel consumption along with battery voltage, speed limiter, Eco mode and much more can be seen. 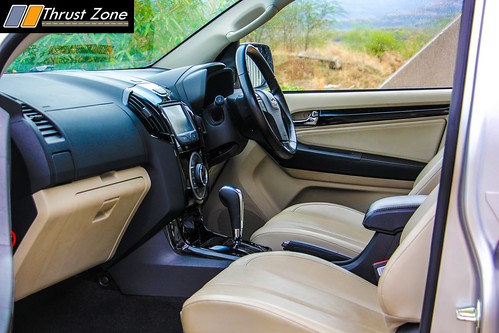 Dead pedal is quite small in the car and placed upwards. Storage in the car is great as you can bottle holders in all four doors along with cubby space in the armrest, large twin glovebox, two cup holders in the front, sunglasses holder, pocket below the headlight switch and other places to keep knickknacks below the center console. There are lot buttons which are unmarked and look a little odd and remind you of missing features. 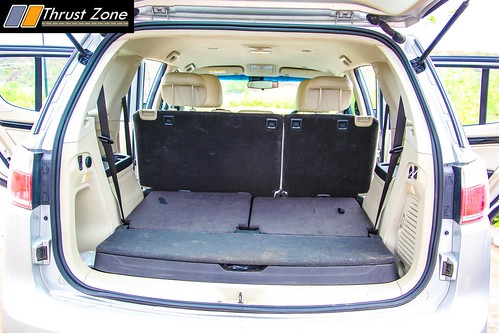 Legroom, headroom and knee room in the front, rear seats and boot is almost segment best. Even with 7-seats up, you get a good amount of boot space and if flipped down there is a massive boot of 500 litres plus awaiting to move your furniture. Air vents mounted on the roof supply a good amount of cool air to passengers. Seats are good in the SUV and visibility is good enough. However, like every other Chevrolet car, the windscreen is low and wide so the view of the sky from the front isn’t that great like other SUV. A-Pillar is intrusive to an extent, but the height of the driving position and size automatically makes way for the SUV. 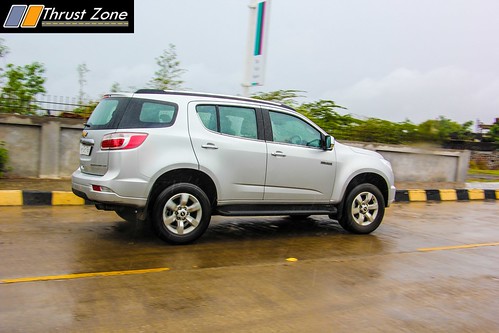 The mammoth SUV gets a fitting engine to its size. The 2.8 litre four-cylinder CRDI engine churns out 200 PS of power and class leading 500 Nm of torque. The engine is mated to a 6-speed automatic gearbox. The engine is smooth, refined and free revving. There is a subtle amount of turbo lag below 2000 RPM, after, which, though, it just pushes ahead the car and the passengers inside it as well. 6-speed gearbox is very smooth and upshifts quickly. Downshifts can take time and this the time where you wished it had a sport option. However, there is even better option, which is the tiptronic one. 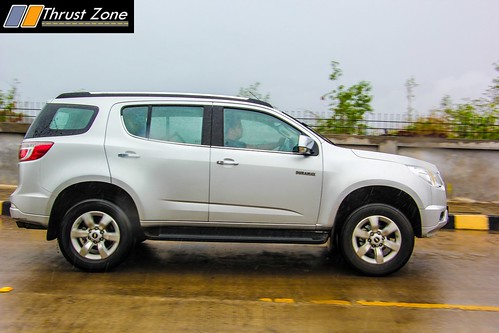 Put it in Tiptronic mode and you have a manual gearbox. Up-shfits and downshifts are smooth and now are done at your command. You can really get hold of the engine and it starts to perform even better than the automatic version. Our test route had some ghats and we clearly enjoyed overtaking with the manual mode. Clearly, we felt like the ‘trail’ behind us was on ‘blaze’ 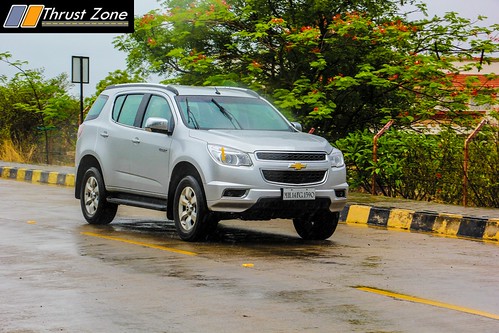 Top speed is a speedo recorded and electronically controlled 189 km/hr. We also got good fuel efficiency number which was 8.7% considering heavy foot 50% of the time along with highway and city duties. Mid range is the best part and low-end is lagging because of the high kerb weight and turbo lag. Chevrolet diesel engines seem to be doing their job in every single car they come in. Let it be the Cruze, older Captiva and now this, the TrailBlazer. 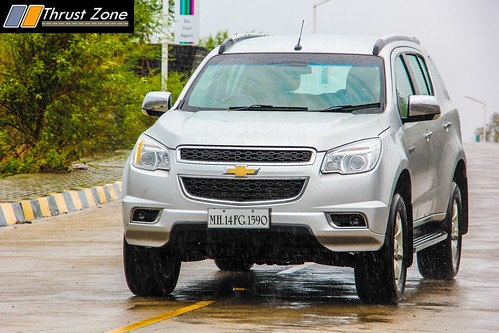 Based on the ladder frame chassis, one doesn’t expect much from the SUV, which weighs over 2 tonnes. However, with the RWD setup, front only doing the steering part, the SUV is maneuverable in town and on the highway. There is body roll, but it is well controlled. The SUV isn’t dynamic, but grip levels are good and the on-road tyres do a good job. Off-road isn’t possible much because the SUV doesn’t have 4×4 and special off-road tyres. All you can do is roll around on the broken tarmac while watching the traction control coming on if you go full throttle on it. 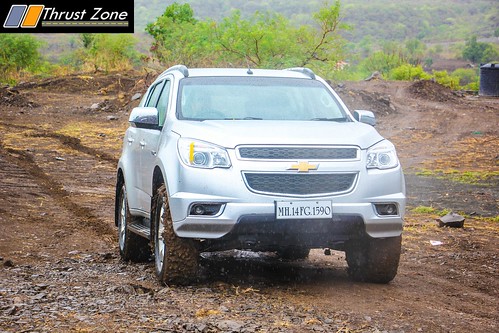 On-road behavior is good overall, however, there seems to be a typical GM trait where the rear feels slightly skittish at high speeds when changing direction. The softer suspension and the entire rear axle just doesn’t inspire confidence. Better tyres can control can easily change this, as witnessed before with other GM cars, but one has to be alert at high speed and direction changes with this large SUV sitting 1.8 meters above the ground with a whopping 253 mm ground clearance. Braking is good as there are disc all around and along with ABS and EBD. The ABS is intrusive and kicks in quite early, but at high speeds it does its job. 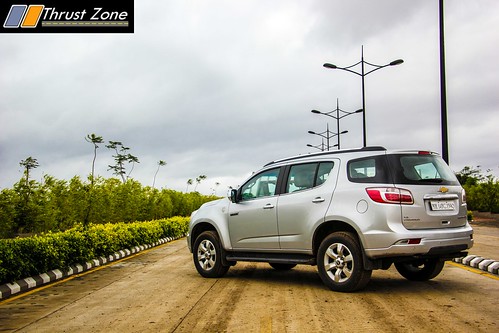 Chevrolet has tried really hard this time make sure they are heard in the market. All of this begins with this, the TrailBlazer. The large SUV is priced well, has a great engine, lot of space, is a 7-seater and offers good value. Sure, there are some missing features but then again, that is the reason the pricing is spot on for an SUV, which is also one of the last of the old-school ladder on frame vehicles. 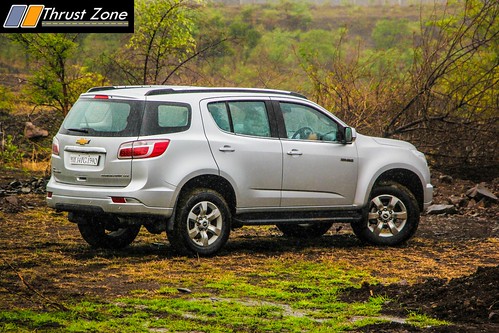 Chevrolet India offers great maintenance packages, service intervals and promises to affordable prices to maintain this large SUV too. If the features list doesn’t put you off, if you want something one of a kind and you are in the market for a vehicle like this with a slightly tight budget, this is clearly the SUV to buy. 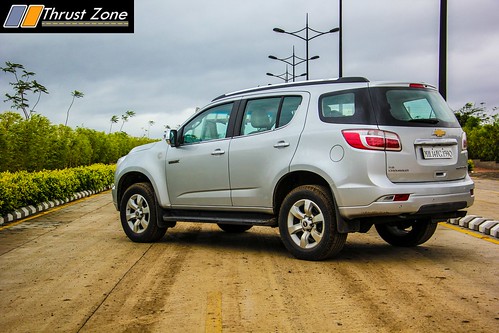