Hyundai Creta needs no introduction. The SUV aka the Perfect SUV, which the band calls, it is a runaway success. The hype before and after launch along with a great package makes it a clear choice in the segment. Hyundai has focused even harder on the Creta in every single way. The Creta is a runaway success because of its premium interior and exterior design along with Hyundai’s after sales and service support nationwide. The manufacturer already does well with the likes of Elite i20 and Grand i10. Creta also makes it to the list of these successful cars and hence they ended up winning all prestigious awards in the country post launch. Creta is made in India and exported globally. Today, to celebrate it, the 2016 Hyundai Creta Anniversary Edition makes its first debut.

Every since the launch of the Creta, every month due to its sales figures or it’s waiting periods length it has been in the news. Hyundai did make an official announcement that the company will be launching Creta Anniversary issue very soon. The manufacturer has revealed the car somewhere and we have our hands on the first ever spy picture of the car. The Creta seems to have a blacked out roof, decals on the door, rear tail-gate, below the C-Pillar and we expect to see them on both sides of the car. Simple yet unique decals can be seen in red and blue color running all around the car. 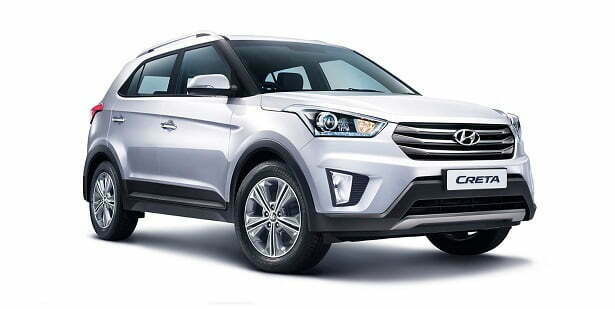 C-pillar decal seems to have 1’st Anniversary sticker on it along with the decals. The tail-gate and other side of the car will have the same as well. Alloy wheels continue to be the same on the outside. We expect to see changes in the interior when it comes to color. Black can be replaced with beige. Prices are expected to go up by Rs. 20-30,000 for the variant. Mechanically we have seen a new introduction of an automatic gearbox in the petrol engine. 1.6 Diesel was already equipped with an automatic gearbox since launch. With the Creta Hyundai has no doubt a winner. Expect this model to sell out faster than an entry-level hatchback.