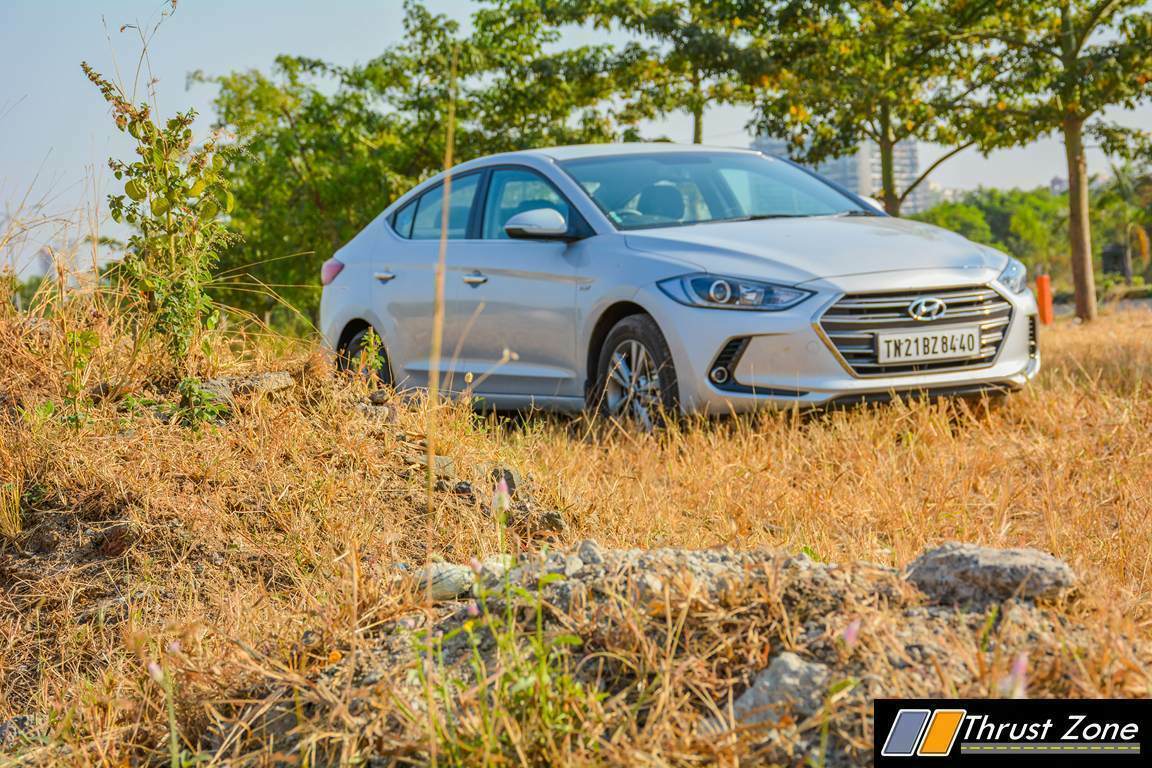 2016 Hyundai Elantra has a new approach towards the interior, an exterior design that wows you at first glance and the Hyundai badge that promises peace of mind

All of a sudden we are seeing a rise in premium car sales. The Germans are uping their pace, launching products one after the other. Other manufacturer just below them are also concentrating real hard getting luxury cars and SUV’s into the market. Even mass market manufacturer are working really hard to make sure the customers don’t fall for the luxury vehicles completely and keep on aspiring them. Meanwhile, they have been busing making new products which look great, are good on luxury and have the similar traits of their normal days cars that they drive. Hyundai is one manufacturer which has got the game absolutely right in this area. International expertise help them to do so. 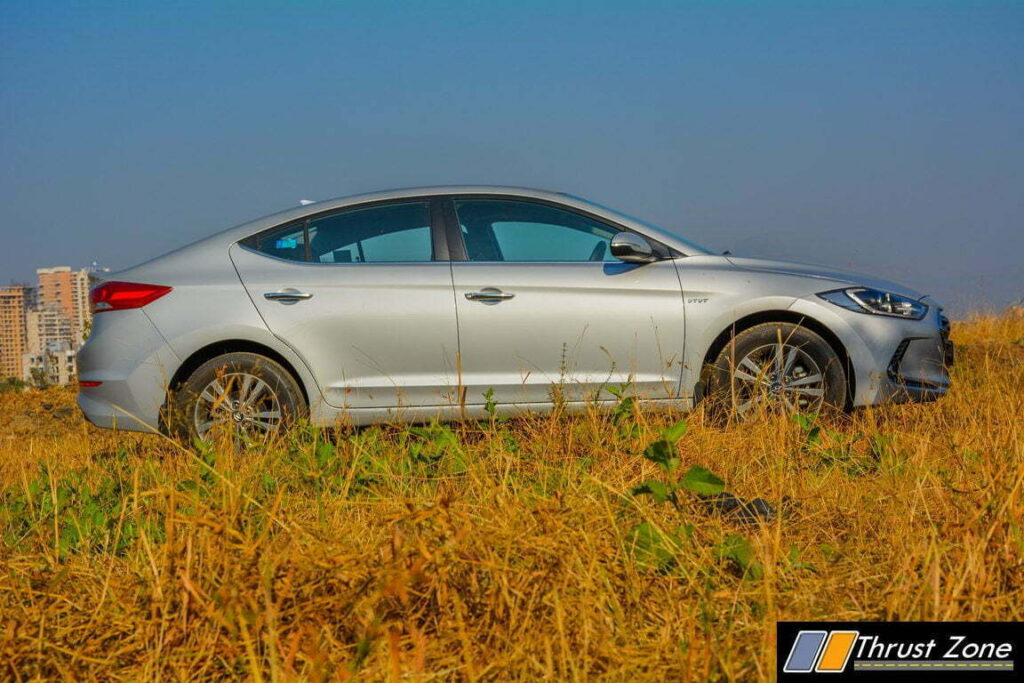 After launching premium products such as Tuscon, SantaFe and Sonata in the country, it launched the new refreshed Elantra 4 years back. Today, time has come for an all new Elantra that is here to take on the D-Segment. Primarily, a segment where the luxury dreams begin. Elantra is a strong contender despite many obstacles that are continuously thrown in its path. 2016 Elantra promises to offer even more than before as it was already quite a package that was hard to ignore. We tested the earlier version and we have the new version with us today. Let’s see if it lives up to the name and does it ace that too! 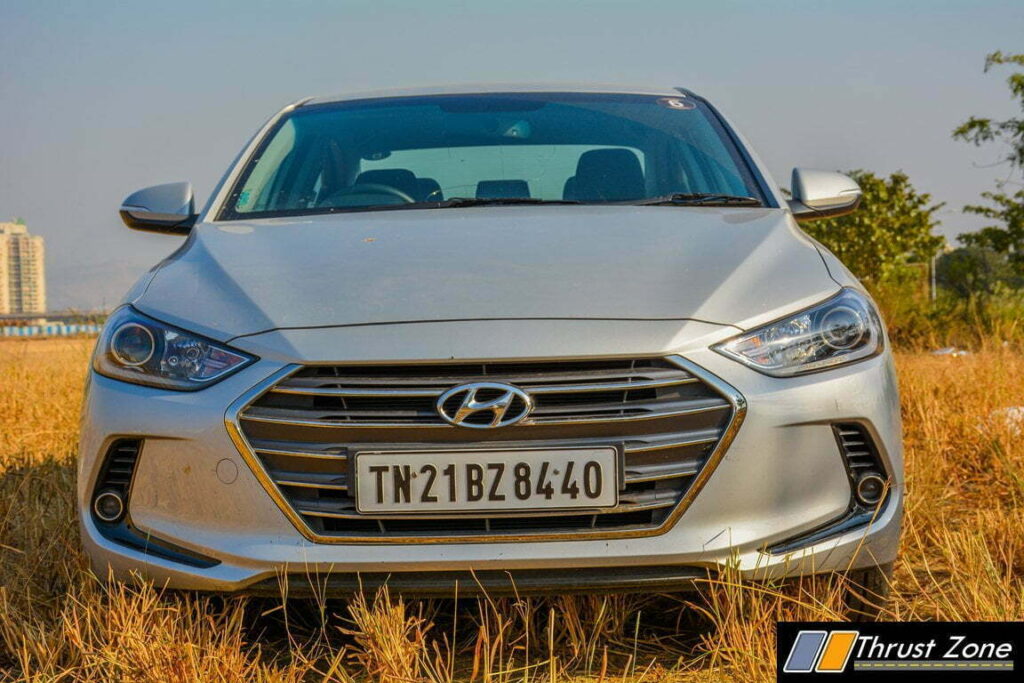 Let’s face it (pun intended) The moment you look at the front it reminds you of a premium luxury car manufacturer with four rings. The grille is very much inspired form the same and even the headlights are similar from the same brand. The headlamps are sharp and wrap around units at the same, which fit snugly. The flat bumper with character lines on both sides along with a bumper with vents that are boomerang shaped is clearly signs that the front designed really well and is in tandem. Side profile is where the strong shoulder line, the subtle rise of the flared wheel arches along with another character line running in the lower part of the door, add muscle to the sharp and modern design that it is. 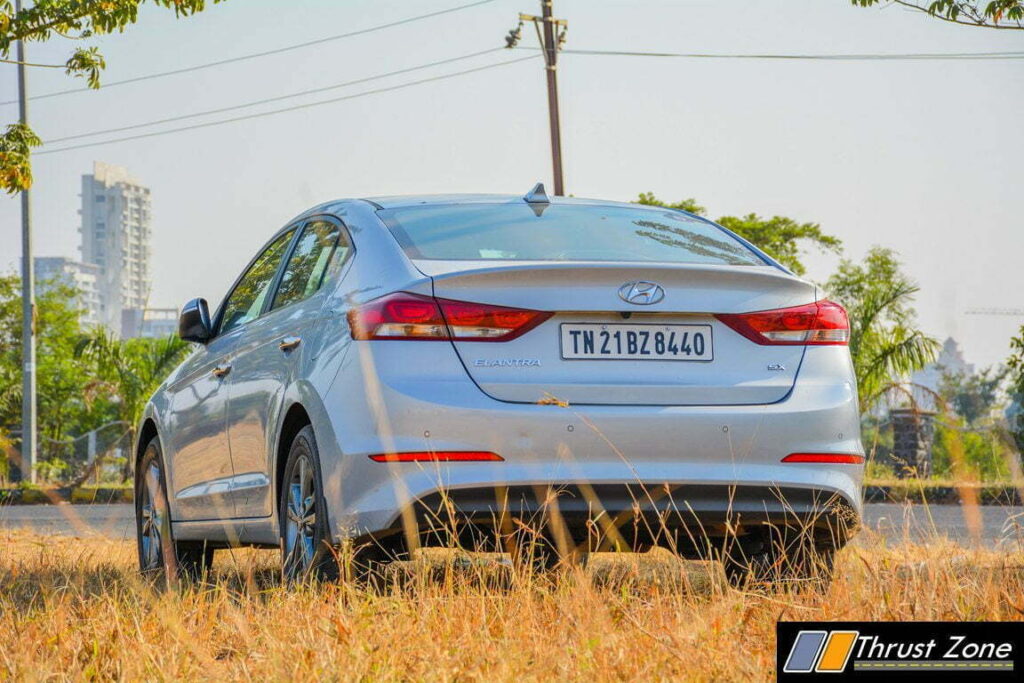 The window kink at the C-pillar takes all the show away as it is has been designed to give a coupe like look. Rear is the place where it shows its Asian origins. Boot spoiler embed onto the lid, the sharp lines running on the boot lid and a strong bumper lines also make it look substantial yet a bit quirky thanks to the edgy tail-lamps, which have the illumination quite reminiscent to the Elite i20, which as we know come from the design god’s, Alfa Romeo. Overall, not an inch this time that disappoints in design and clearly Elantra is one hell of a looker. 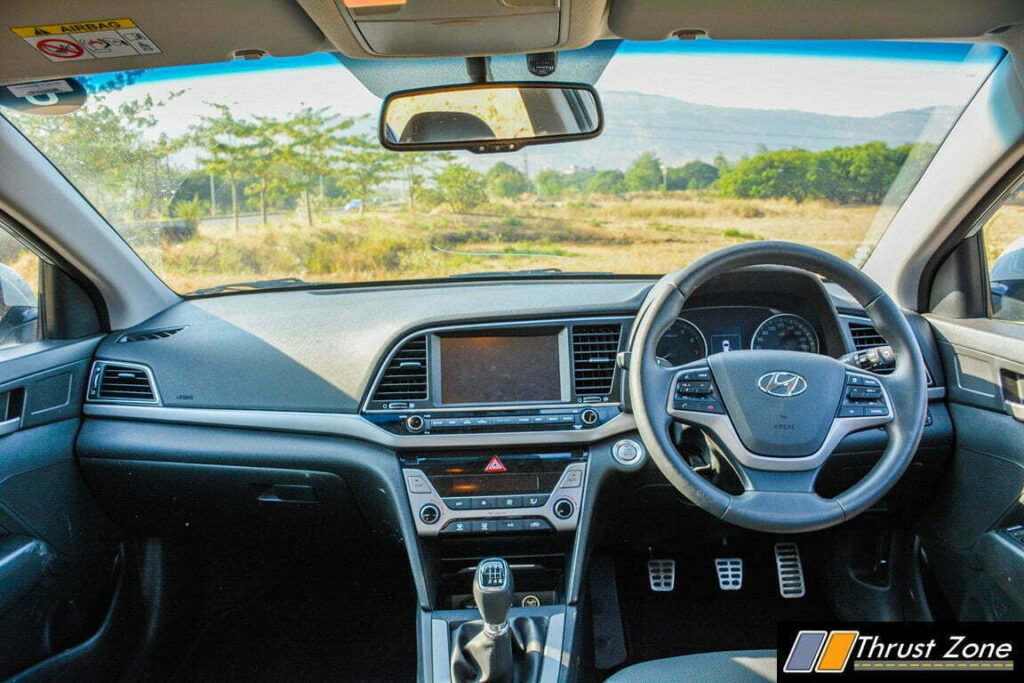 Step inside and you see the new interior has a very European approach to it in its design. The layout is clean and minimalist as there are less buttons on offer. The 8.0 inch touch-screen takes the center stage here and has a kink on the left side that lends a clean look to the entire dashboard. Base variants get 5.0 inch touch-screen. Plastic quality is what has mixed reactions from us. The quality is good and it doesn’t feel cheap, but this segment competitors offer soft touch plastics and dashboard which the Elantra misses out.

One would argue that the Elantra base price is much cheaper but then again, we think interior quality can be better. All though this time, Hyundai has skimped on some features too. No one touch up or down for all windows, except the driver window which is shocking in this segment. Glovebox isn’t illuminated or cooled. There are not front parking sensors for a car of this size. 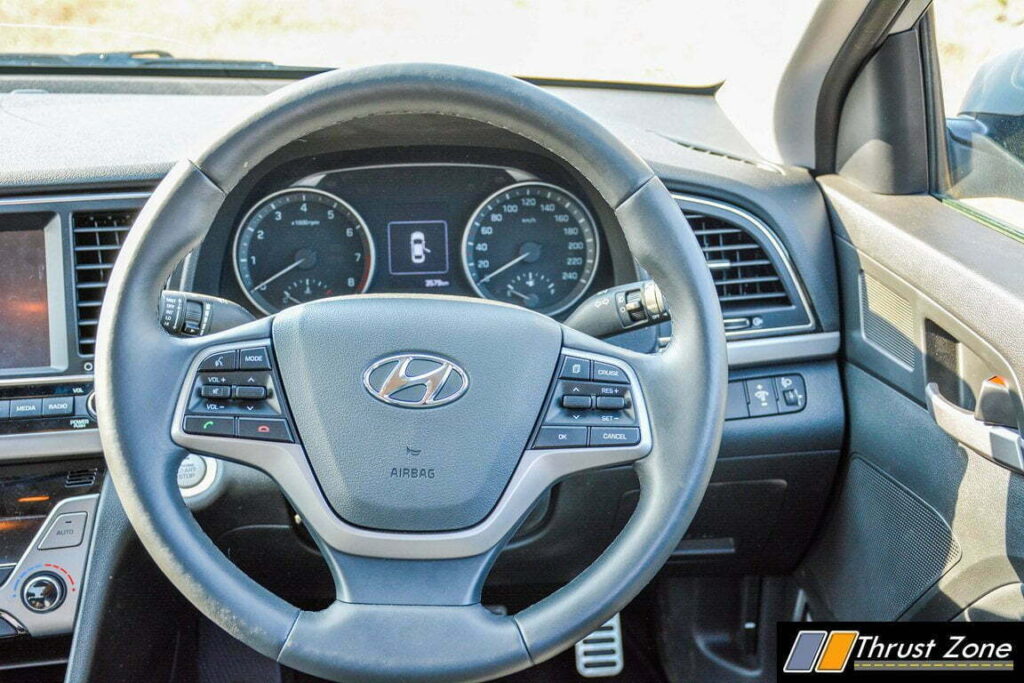 What you do get are front seat coolers, cruise control, automatic climate control, connectivity options, Apple Car Play, Android Auto, front and rear defoggers, power seat for driver, trip computer, front and rear armrest, rear a/c vents, one touch turn indicator, sunroof, parking sensors and reversing camera. Projector headlamps, fully electric ORVM and electric IRVM and other things are part of the list. There are USB charging sockets in front, arm rest and at the rear. Stowage area is plentiful as there is space in center armrest, cup holders, bottle holders in door pockets and glovebox. Music system is just about decent that does the job when it comes to quality. 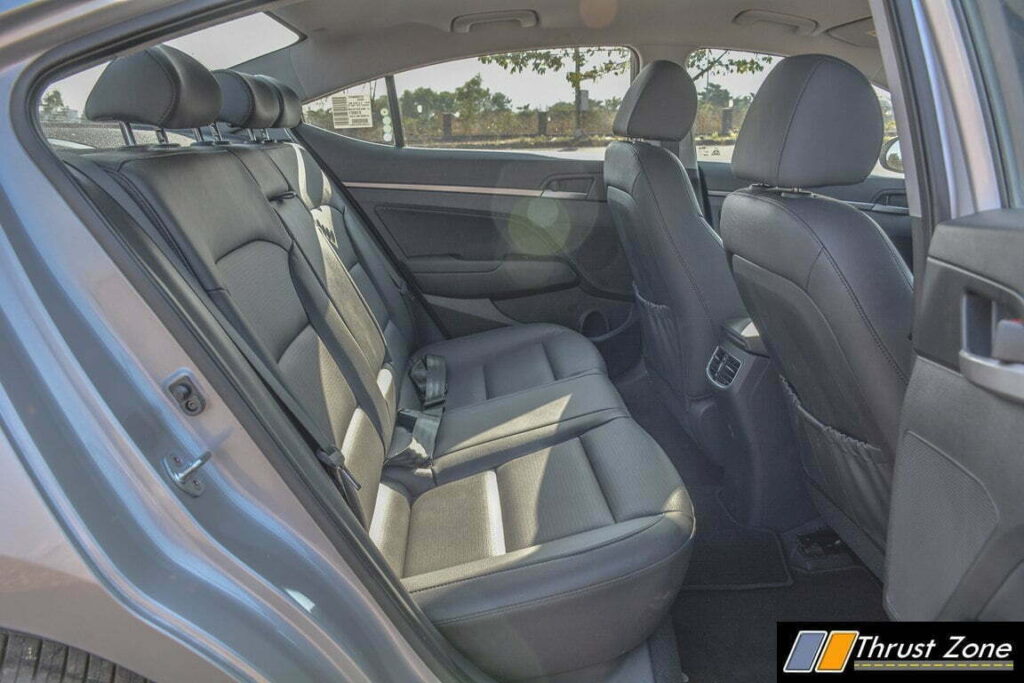 Space is where the Elantra shines. The seats are large generous both front and rear. They are very supportive and long distances isn’t any issue for any kind of adult. Legroom is generous, shoulder room is just about ok and so is the headroom, which can also be a bit tight. 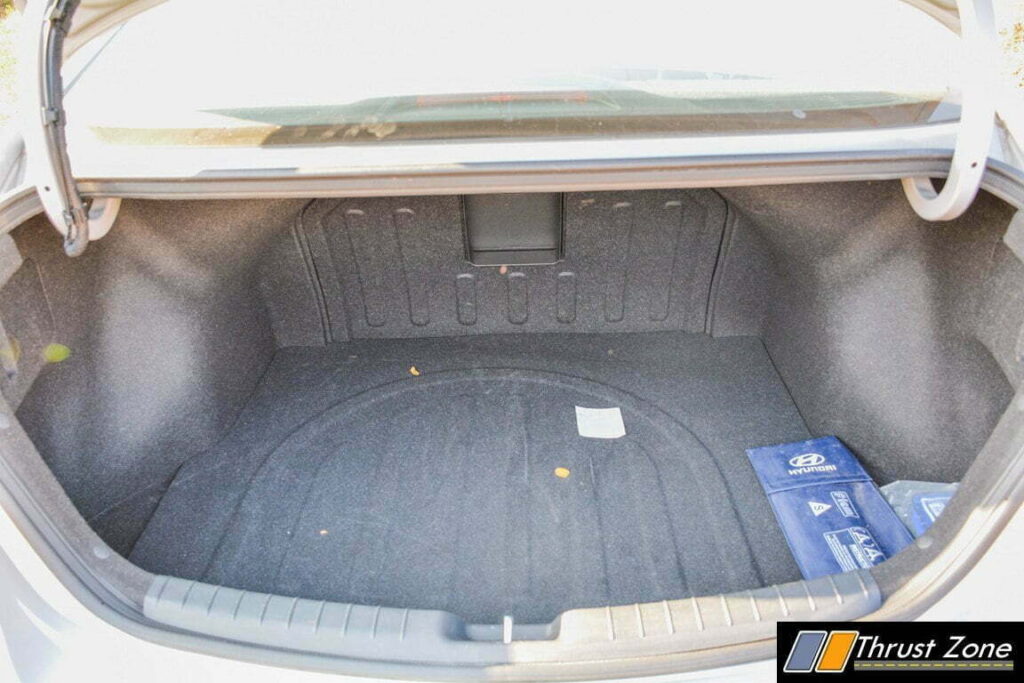 Boot space is lowest in the segment which stands at just 420 litres, while cars from segment below and above are able to give over 500 litres and in some cases around 600 litres too. Visibility offered all around is good, parking in tight spots isn’t an issue and at tricky junctions A-Pillar aren’t much of an hindrance. Overall, as we begun explaining this part, it is a mixed bag but there is still more on offer that impresses. 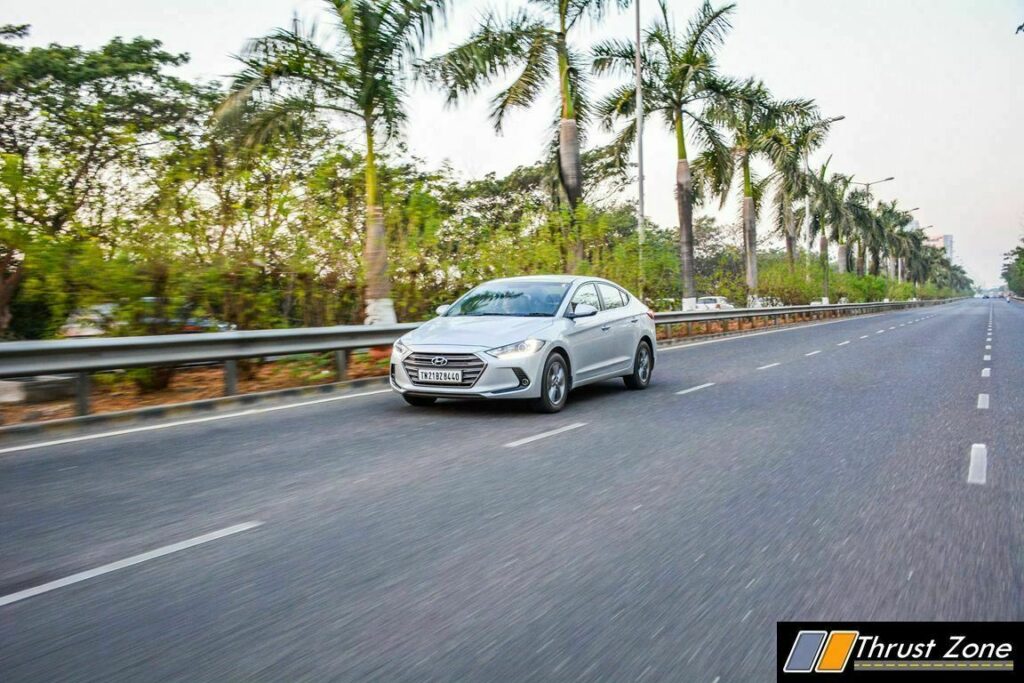 We had the 2.0 petrol engine that is a new unit on offer in our test car. As always with Hyundai engines, NVH levels are far more superior than its competition by a huge margin. The engine is smooth and refined and doesn’t murmur even at idle. Surprisingly, there is a lot of driveability offered. 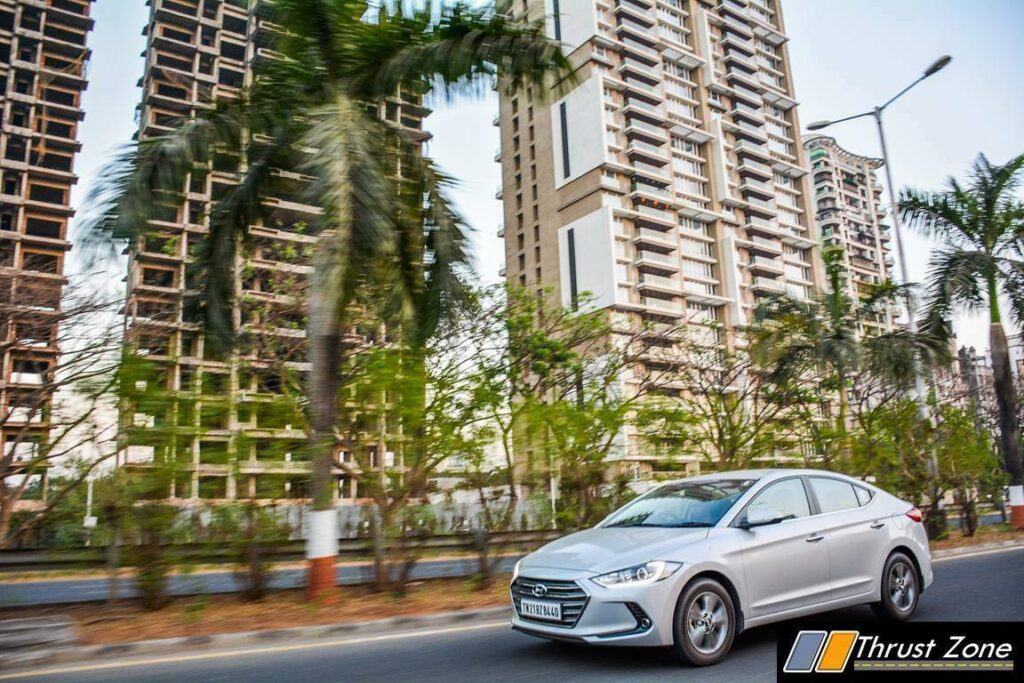 Thanks to bump in capacity over the 1.8 litre engine from the last car and the shorter first three gears compared to taller rest three gears. City driving is no problem whatsoever as the clutch is also light but has a very annoyingly short throw. Gearbox is super smooth like any other Hyundai car. Performance also on the other hand is scintillating. 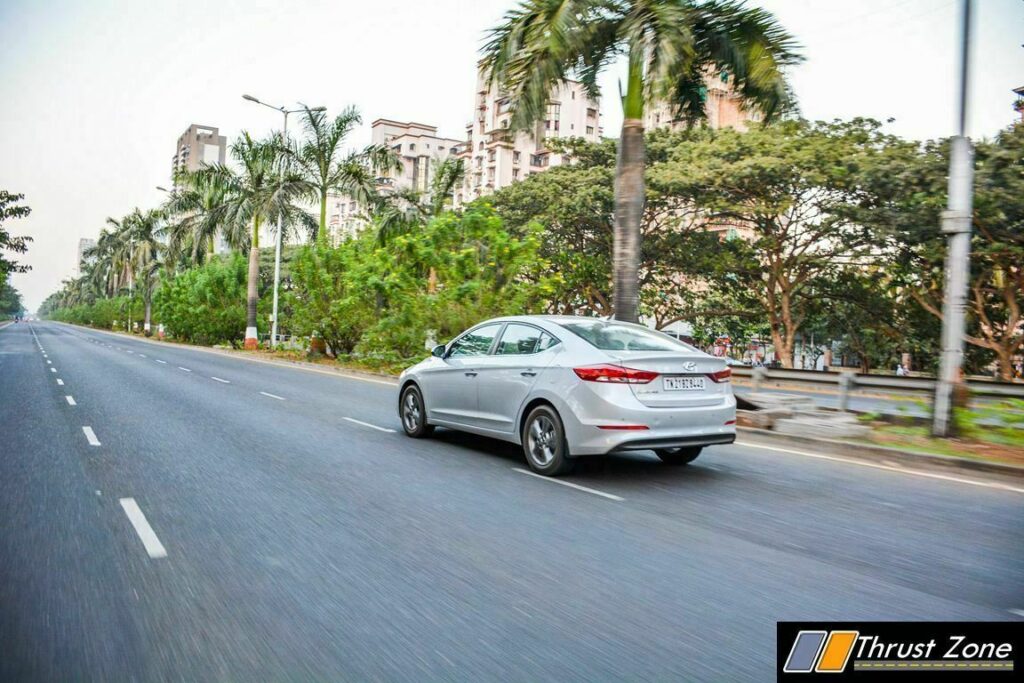 The 150 PS and 192 Nm of torque from its engine means, third gear redline can take you to 145 km/hr. The top-speed of the car is around 180 km/hr mark that we saw, but it had more juice that could be extracted. Sixth gear helps in cruising comfortable without stressing the engine and aiding in fuel economy. Fuel efficiency numbers in our testing were impressive. We got 9 km/l in the city and 11.89 km/l on the highway. Respectable numbers for this power house as it was driven enthusiastically most of the time. 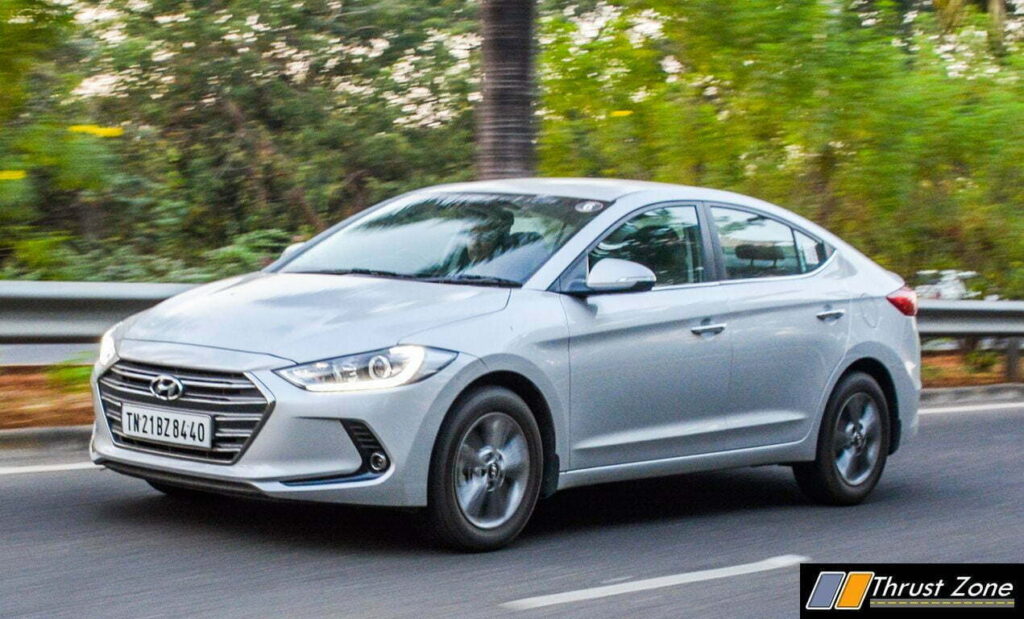 Every new Hyundai that comes in the market is a major leap when it comes to dynamics and the new 2016 Elantra is now different. Without the driving modes on offer, the steering was spectacularly well calibrated. Lock to lock ratio is well calculated, the feedback, the responsiveness at dead center, the direct-ness and the weighing up on highway speeds is all done almost right. This is by far the best Hyundai steering rack till date. 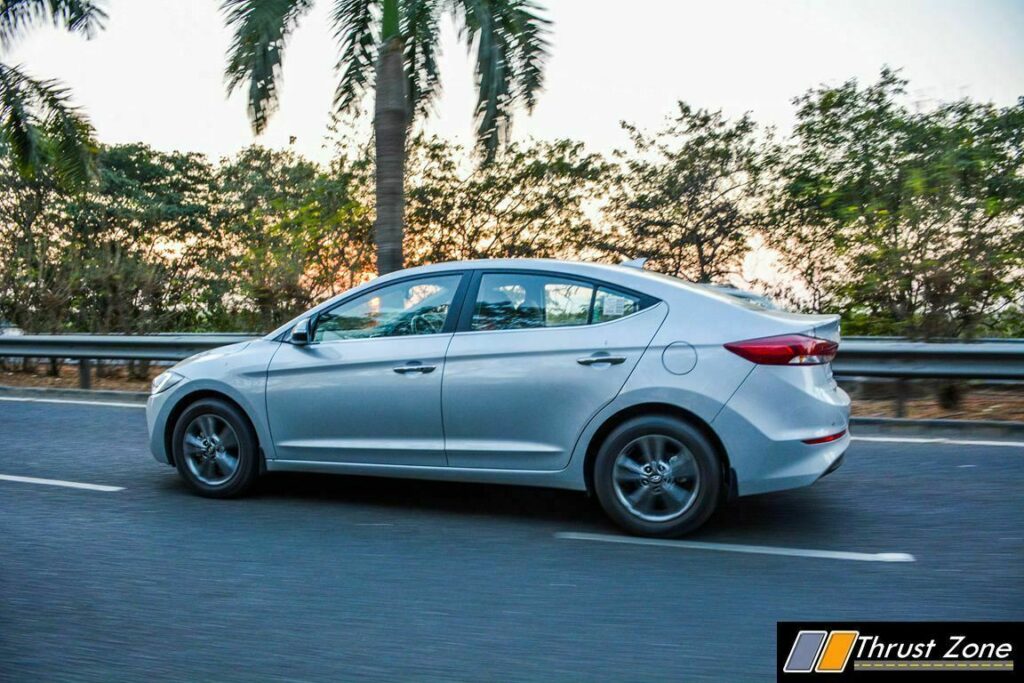 It could do with more fine tuning but for a luxury car where most owners don’t ask pin-point precision even they would eventually happy with the communicative yet easy to use steering in any situation. Be it in the city or the highway. The car is easy to maneuver, taking u-turns and parking. 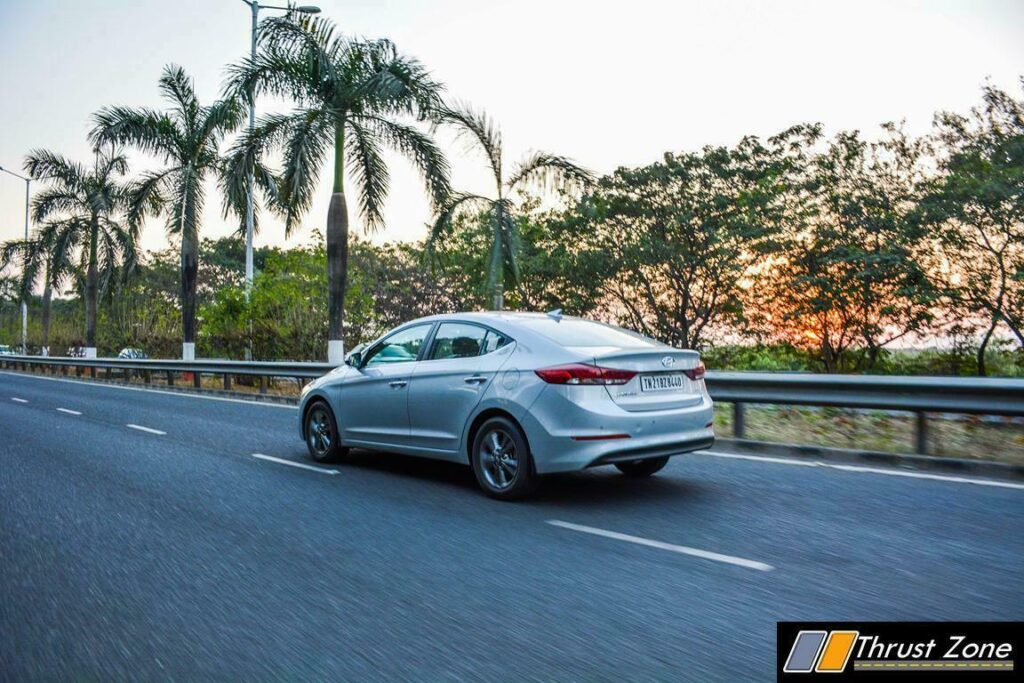 The chassis is also very good and has very less body roll compared to previous version. However, what you can notice is that the rear suspension is noticeably softer than the front suspension, which bounces very slightly but it isn’t a deal breaker like previous car. This is done to keep the ride complaint for rear passengers as the underlying stiffness of the suspension can be discomforting. Brakes are good as there all four disc on offer and pedal bite is spot on. 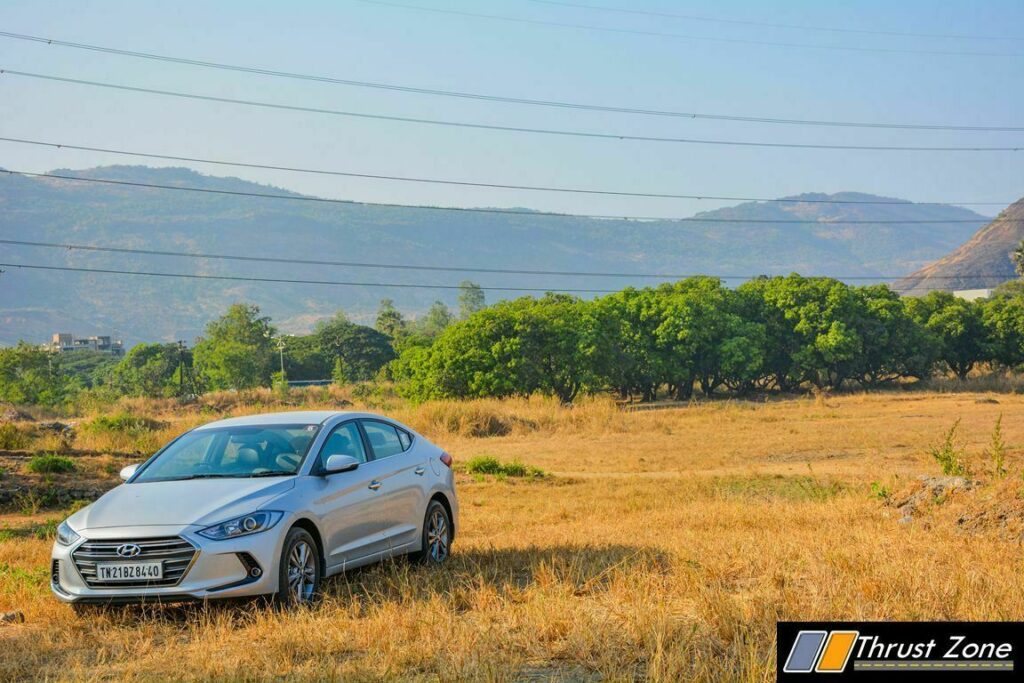 As an genuine upgrade over the previous car, the Elantra shines higher than ever before. Every new Hyundai has masked its weakness very well and now is very desirable car in its segment as it continues with offering features, value for money, quality, reliability and peace of mind through the large of number of dealerships. Elantra may not be a full blown luxury car in its category, but the car has the Hyundai badge which promises a lot as we all know. 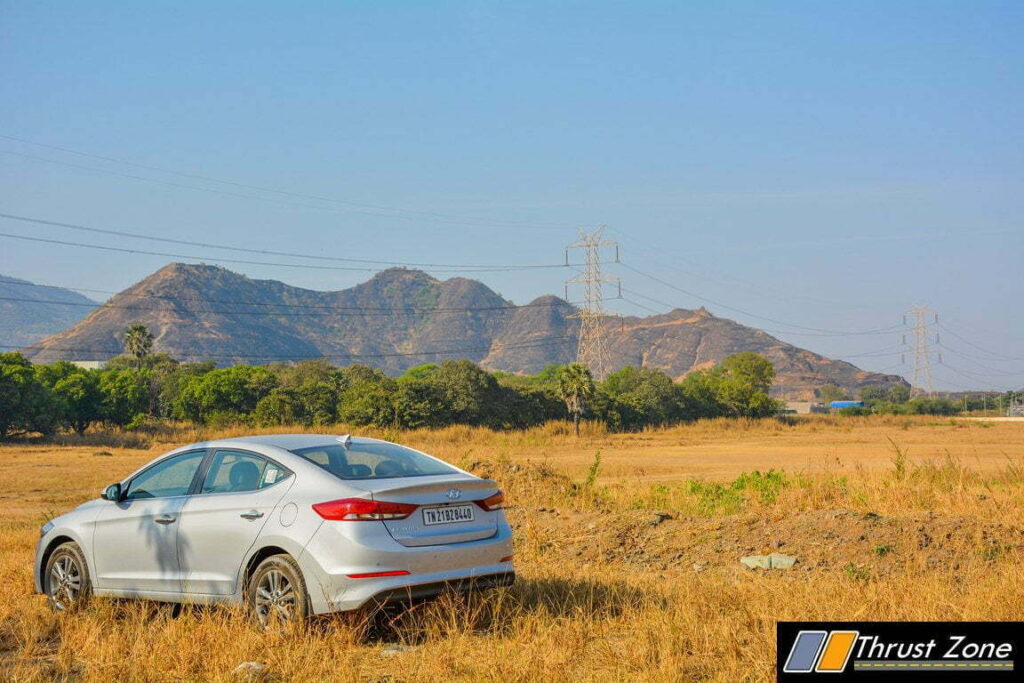 The styling and the other capabilities that a Hyundai cars offers mentioned above makes the Elantra a true contender in a segment where it ends up carving its own niche and will end up attracting a set of buyers that are loyal and will stay loyal to the brand once they experience a car as accomplished as this. 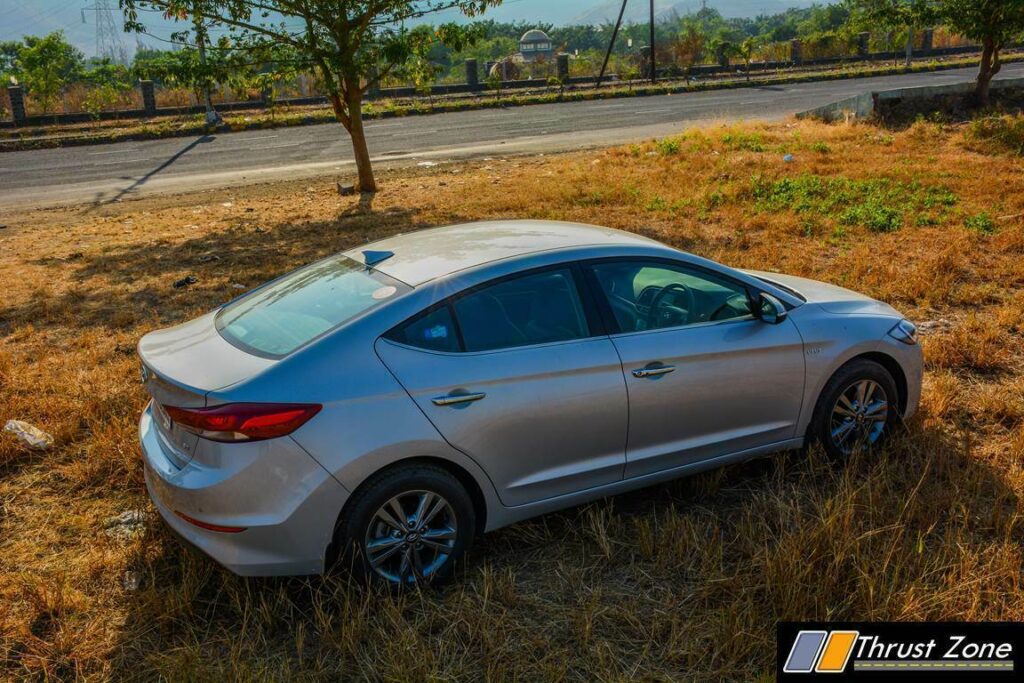 Read this too:Variant by variant detail of 2016 ELANTRA, here!

Tata Hexa Variants, Drivetrain and Specifications Details Out, 14 Variants to Choose From