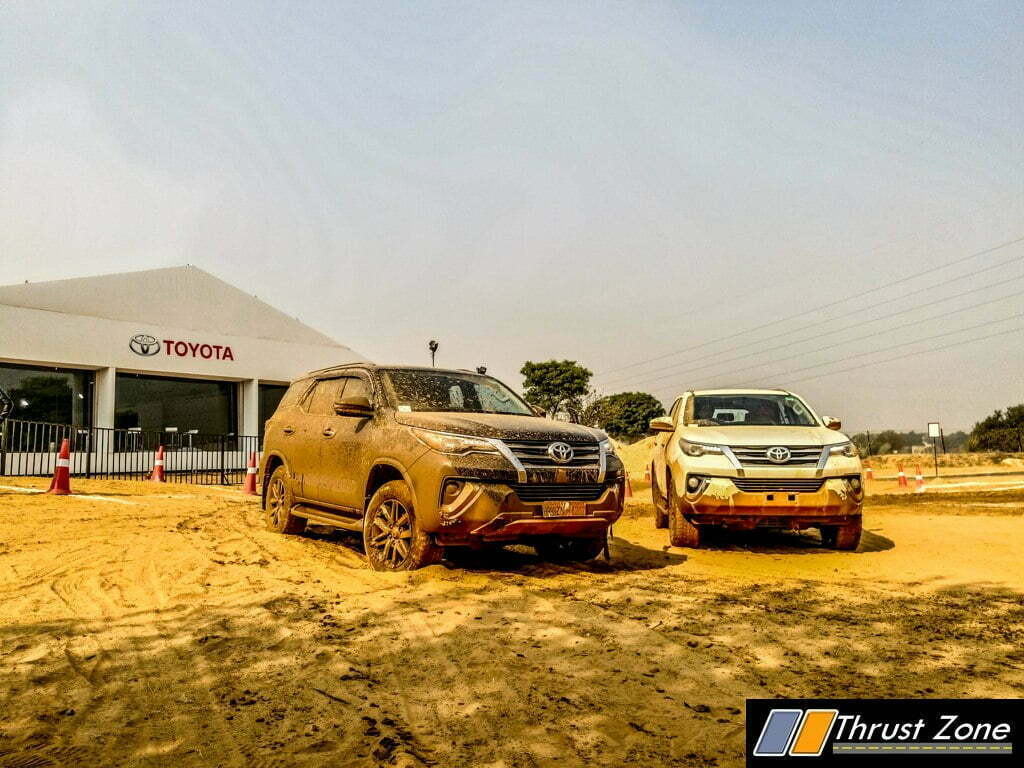 We recently got an opportunity to drive the all new Toyota Fortuner at a boot camp organised by the company on the outskirts of Gurgaon. Toyota has already launched 2nd generation of its traditional body-on-frame SUV in India at a rather interesting price point that starts from Rs. 25.92 Lakhs and goes up to Rs. 31.12 Lakhs for Delhi Ex-Showroom. It has already garnered rave reviews industry-wide and it was time to test the cars capabilities when the roads end and fun starts. The car we tested was powered by Toyota’s new 2755cc DOHC, 16-Valve In-line 4 cylinder Diesel engine good for a maximum power output of 177PS @ 3400 RPM and 450 Nm @1600-2400 RPM for the Automatic Transmission that was at our disposal. The sequential auto shifter is smooth and the added paddle shifters and the shift-lock aid to the ease as well. 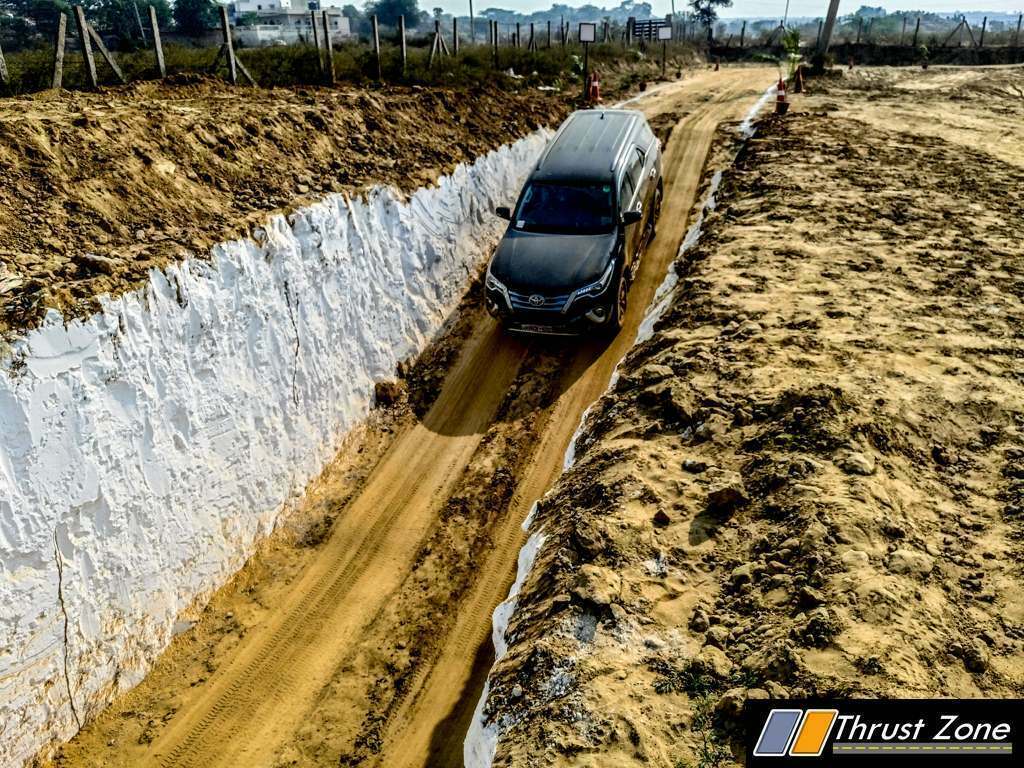 On the design front, the new Fortuner looks much more contemporary and authentic SUV albeit in a very Japanese design form. It is sharper all around with the new head and tail-light design clearly looking upmarket and contemporary. The Slim LED-equipped headlights and the very European tail light design makes the new car have a much better road presence than the Fortuner India has come to love since 2009. The new interior looks premium and even in Toyota’s mature design philosophy the interiors come out looking much youthful than the outgoing model. In fact, once you sit inside the new Fortuner, you might as well ask why Toyota gave the old car such bland interiors in the first place.

The New Toyota Fortuner takes its off-roading characteristics seriously with its new A-TRC (Active Traction Control), DAC (Down-Hill Assist Control) and a pretty nifty electronic drive control that replaces the old cars secondary gear mechanism for Off-road needs. Then there are those Approach/Departure angles of 0.51rad/0.44rad which meant that you can pretty much get lost in the middle of nowhere and have fun while at it. 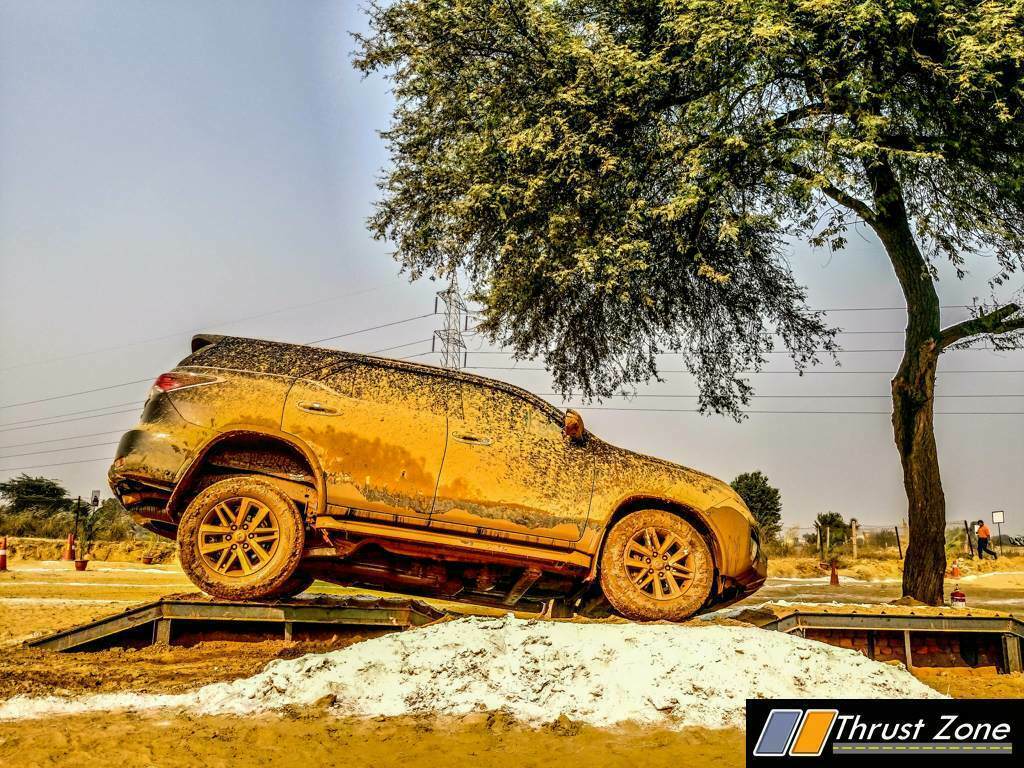 Adding to all that is the cars new chassis which has considerably better torsional and bending rigidity compared to the old car. Toyota representatives were pretty happy to tell us that Toyota has designed the chassis and chosen its material thickness in a way that it would be corrosion resistant for at least 20 years of real world usage. This means that you would not have to buy a new car for your kids when they ask for one after getting their driving licenses, pretty good thing we say.

The track for us consisted elevation, articulation, deep ditches for wading through water, slush, and high speed off road sections among others. A shout out for Tejas from Off-Road Junkies who took us for our first demo drive through the track. In his hands the new Fortuner particularly looked at home and happy as it did things that most cars will feel dizzy about.

We liked the cars stability under hard acceleration on off-road sections while the stability under braking on the section was pretty good as well. The Down Hill Assist worked fine and all one needs to do is to hold the steering in the right direction and let the car do the rest. Same goes for the 350 elevation that the car happily climbed without any drama. 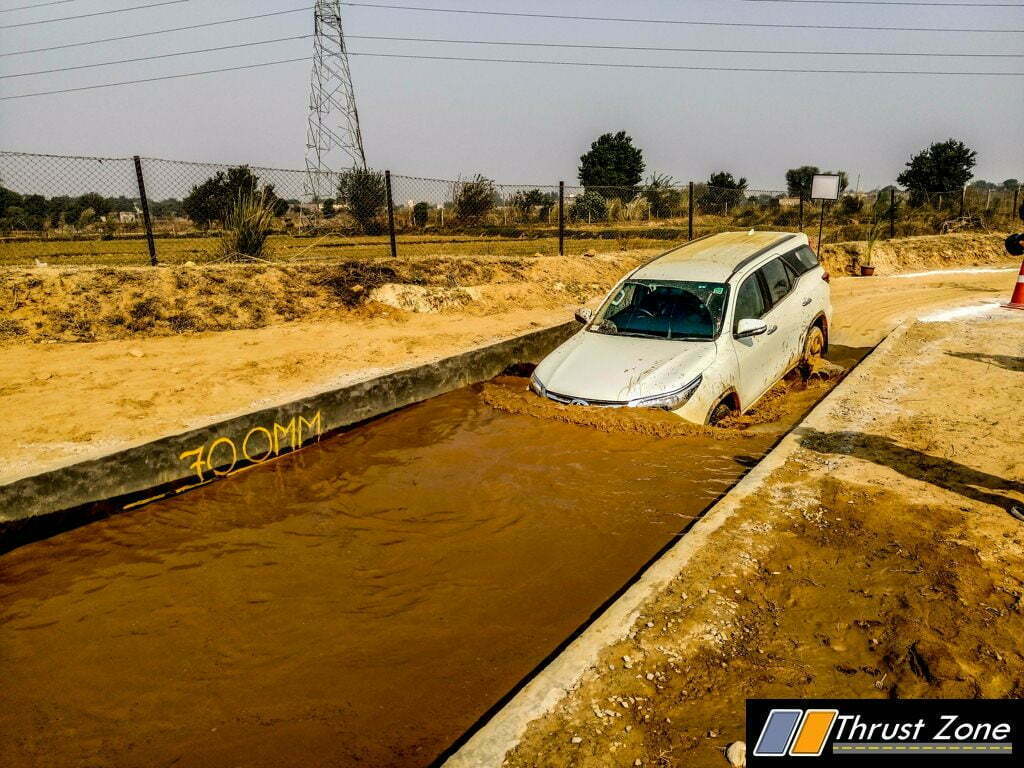 The new cars improvement in the suspension department was clear of the tracks rumble strips and those mighty annoying chicken holes. The occupants move about much less in the new car thus offering an improved comfort on non-existed roads. The car has a water wading depth of 700 mm that it made look much easier than we expected. The car good handling was evident during the slush section as it hoped turned drifted jumped and then hoped more through it providing grins all around.

However, the cars true off-road intent was showcased at the ‘expert-only’ articulation section, the cars Active traction Control was flawless and never let you know about the drama that was happening outside. Once out, watching how the car took this challenge was a sight.

Moving on from the expert we got our turn to drive the new Fortuner and the light yet precise steering was evident. We also liked the pretty tight turning radius of the new Fortuner which should be a boon in normal city driving while an absolute hoot when the monsoons kick in and you can finally jump over (legally, almost) over those dividers to save yourself from jams. 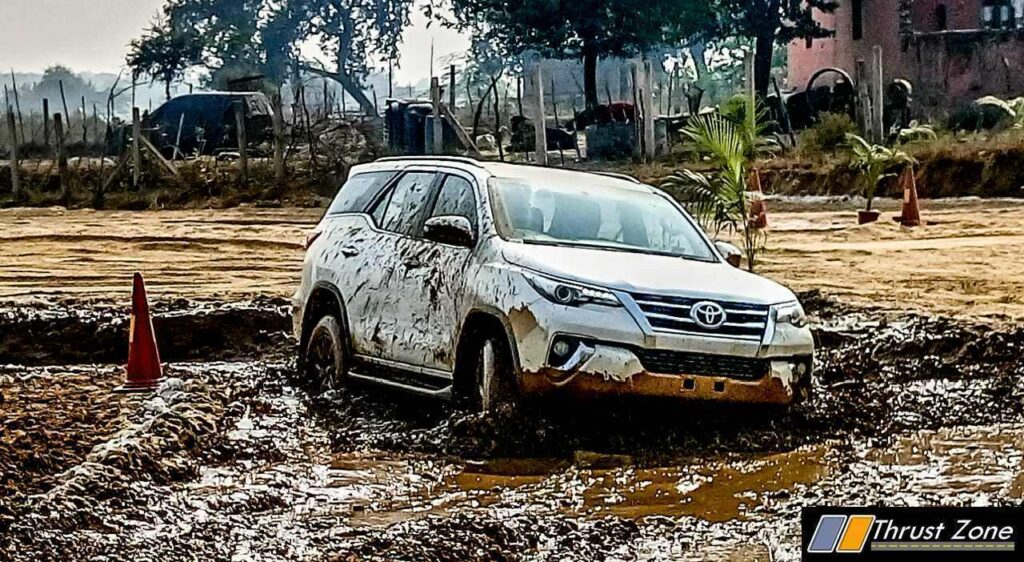 As we did the sections one-by-one it was evident how comfortable the Fortuner was to drive through these challenges and effectively the new Downhill Assist and Active Traction Control worked. For someone not used to off-roading as such this system is pretty much idiot-proof which is bound to provide much needed confidence during your adventure excursions.

Summing up the experience we would like to say that the new Fortuner takes the nameplate to a next level of comfort and capabilities while being much more contemporary and feels upmarket and premium. What we did not like was the feel from the brakes; however it was more about the cars being subjected to rather relentless demo exercises. We also did not like the range of settings the steering and seating combination had. 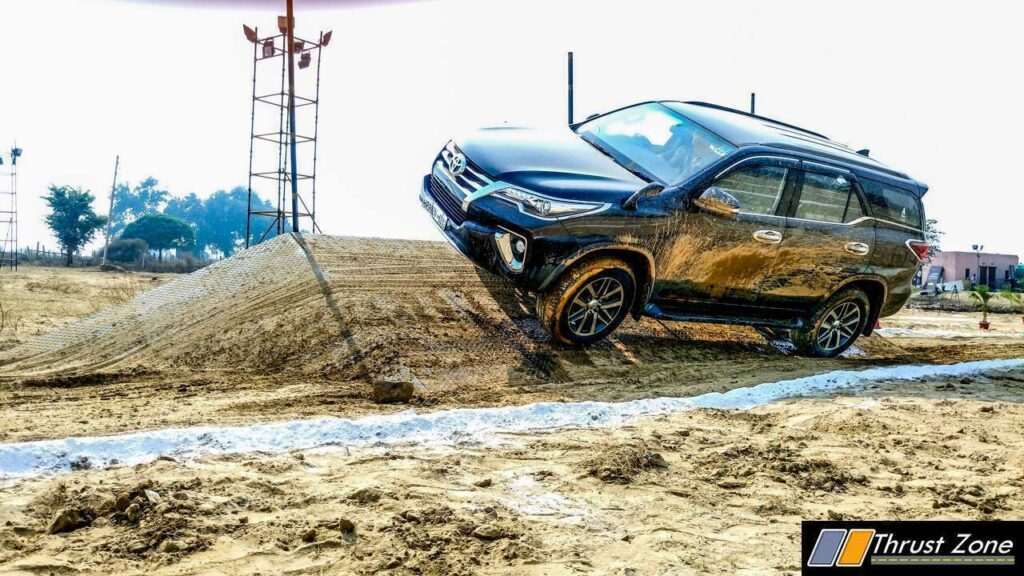 The rack and reach, both could have had a longer travel to suit different seating positions. We always felt the steering was too low even at its highest setting, while we sat as low as we could comfortably. All in all, the New Fortuner takes the legacy of the previous car further and should be able to fend off the scare from its rivals like the new Ford Endeavour.