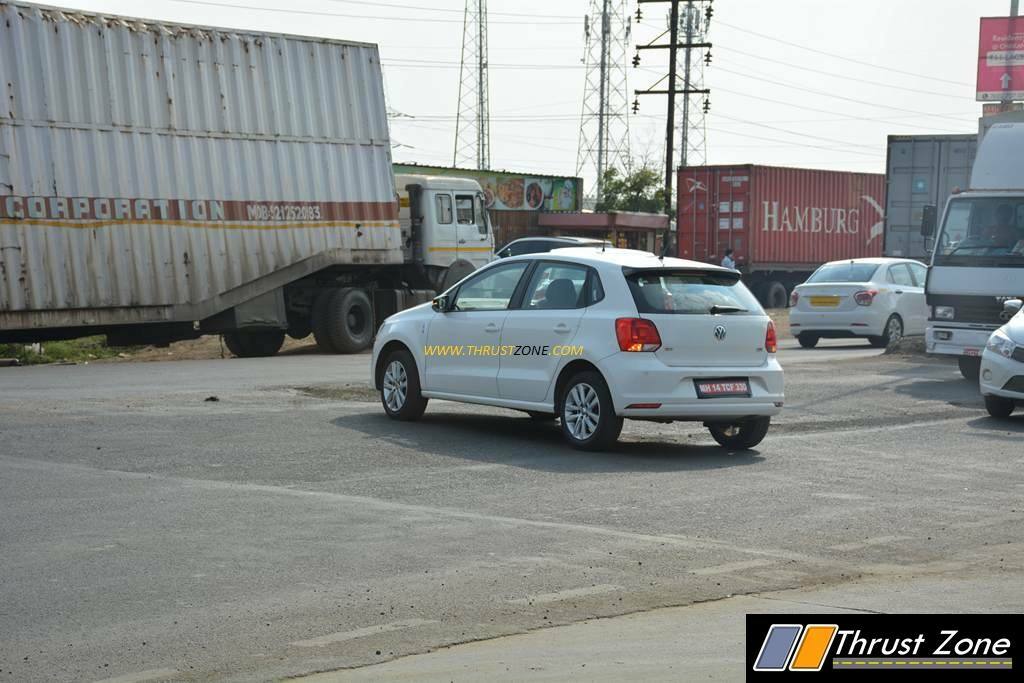 Volkswagen Polo is a hatchback running on our streets since 2010. The manufacturer has updated it ever since. Two major facelifts and ever year nip and tucks everywhere to make sure it stays fresh. Nip and tucks in German lanaguge also includes plonking bigger engines. We saw the GT TDi come in various forms, then we saw the GT TSi come with a 105 BHP motor matched to a DSG gearbox. Last year we saw a facelift and now again, for the year 2016, we have a new model with more nip and tucks, which primiarly include more firepower under the hood. 110 BHP GT TDi has been caught testing for the first time, let’s see what can kind of details we have about it for you.

Design will continue be to the same as before. Seen in this spyshots, there is hardly any changes to any area. Expect new alloy wheels and similar front and rear design. Polo does continue to age well but it is now slowly show its sign of ageing. New model is on the way but it will only makes it to our shores by late 2017.

High quality interiors will all the features from a segment above will continue to be offered. One touch up and down windows, fully electronic mirrors, day and night electric IRVM, climate control, steering mounted controls, rear a/c vents, connectivity options such as Bluetooth, AUX, USB and Mirror link, which will offer Apple Car Play and Android Auto. List will also include cooled glovebox, one tap 3 flash turn-indicators, parking sensors, camera and much more on offer.

Launch will happen before Jan 2017 most likely. Pricing should begin with Rs. 9.25 Lakhs

Major highlight of this mighty hot oil burning hatchback will include the new 110 BHP engine that will have 5 more BHP than before. The tune is better as we have sampled in the new Ameo. The car should be more peppier as it is slightly lighter and dimensions are tighter. 1.5 TDi will continue offer segment similar on-road mileage numbers as before, which is around 17-18 km/l.

Claimed numbers may be far away from rivals but on the road Polo never disappoints with its real life fuel efficiency numbers. 250 Nm of torque from this DOHC, turbocharged (bigger and new turbo here) will give stellar performance (Kinda-guaranteed)

Dual Airbags, ABS and EBD along with traction control will be standard on all variants of the GT TDi

Read this too: AUDI A4 TDI SPIED TESTING

BMW Transmits ConnectedRide System Will Connect Riders In Every Situation