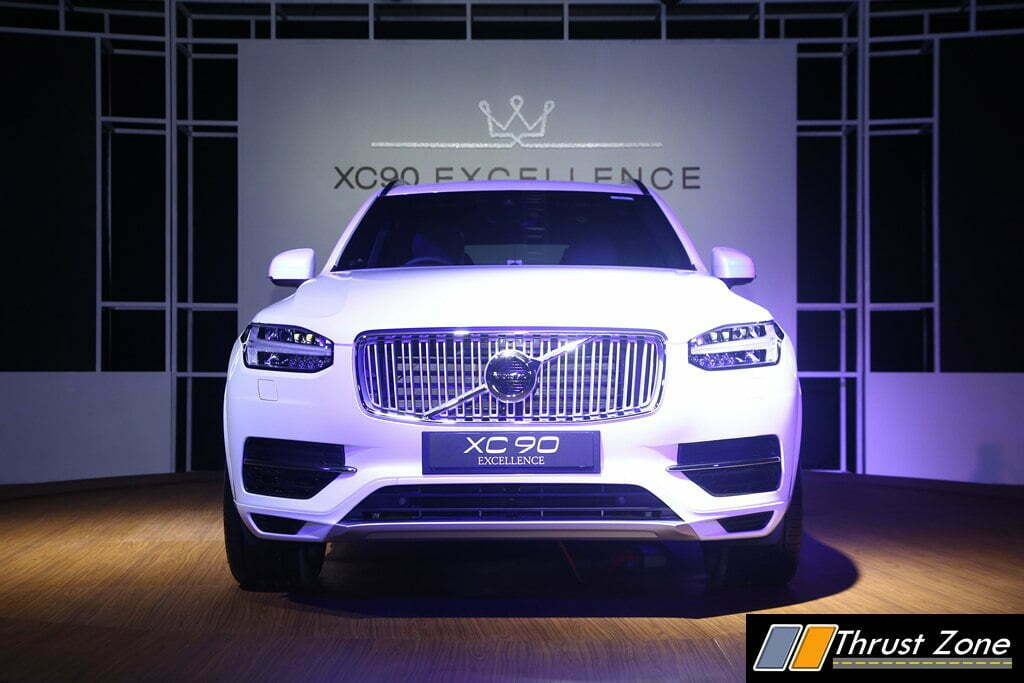 2016 Volvo XC90 Excellence Hybrid T8 is the plug in hybrid SUV in the market and the flagship product for the Swedish brand.

Volvo is all set for an aggressive market strategy that will begin worldwide. Every segment will see new products from the brand Volvo and make sure it reaches a wider audience. The new platform, engines and much more make sure Volvo has an distinct advantage. This started with the Volvo XC90 and then V90. Now again, the XC 90 is taking shape and this time it comes in the much talked about hybrid avatar.

Volvo XC90 on the outside continues to look the same. There are tinted windows and minor changes to make sure it stands out with the help of badging. Exterior changes include 21-inch wheels and chrome embellishments all around.2016 Volvo XC90 Excellence Hybrid T8 Engine is powered by a 2.0-litre, turbocharged and supercharged four-cylinder petrol engine. The combustion motor makes 320 BHP of power. The engine powers the front wheels that is combined with an 87 BHP electric motor driving which drives the rear wheels. This bring a total output to 407 BHP and 640 Nm of torque. The dimension are similar as before. The SUV measures 4950 mm in length, 2008 mm in width and 1776 mm in height and has a wheelbase of 2984 mm.

There is a one more motor, which is the 25 BHP starter motor, which can be termed as a generator to fill in the gap for the petrol engine and gearbox. This motor assists from time to time to help smoothen the switching between the different drive methods and fill any torque gaps if necessary. Volvo also claims an all-electric range of 40km for its petrol-hybrid SUV. The eight-speed automatic gearbox and three driving modes such as Pure, Hybrid and Power help Volvo achieve better numbers in every way. Volvo claims the SUV can sprint 0 to 100 km/hr in 5.6 seconds and has a top speed of 230 km/hr. Surprisingly, the Volvo XC90 only emits 49 grams per km when it comes to emission which could segment best number as well.

The 2016 Volvo XC90 Hybrid T8 Engine is being made available only in the Excellence trim. The diesel variants are only available in Momentum and Inscription trims, which is the base and middle variants. The hybrid comes with a new 19 speaker Bowers & Wilkins sound system, along with Orrefors Crystal gear knob along with champagne flutes. Volvo V40 XC90 Excellence also comes with radar system as well. Features set includes Air Suspension on all four wheels, Adaptive Cruise Control, rear collision warning, park pilot assist along with auto braking.

The 1.25 crore price tag includes two charging stations one for home and for office which can ease daily driving. 2016 Volvo XC90 Excellence Hybrid T8 is the latest model which is being imported as a CBU. What can be expected from the company? Volvo could add another variant, which would be the sportier and sleek-looking R-Design variant in the Indian lineup.

SCOOP! Bajaj V200 and V400 Will Never Make it, Will Go Down the Ladder Instead