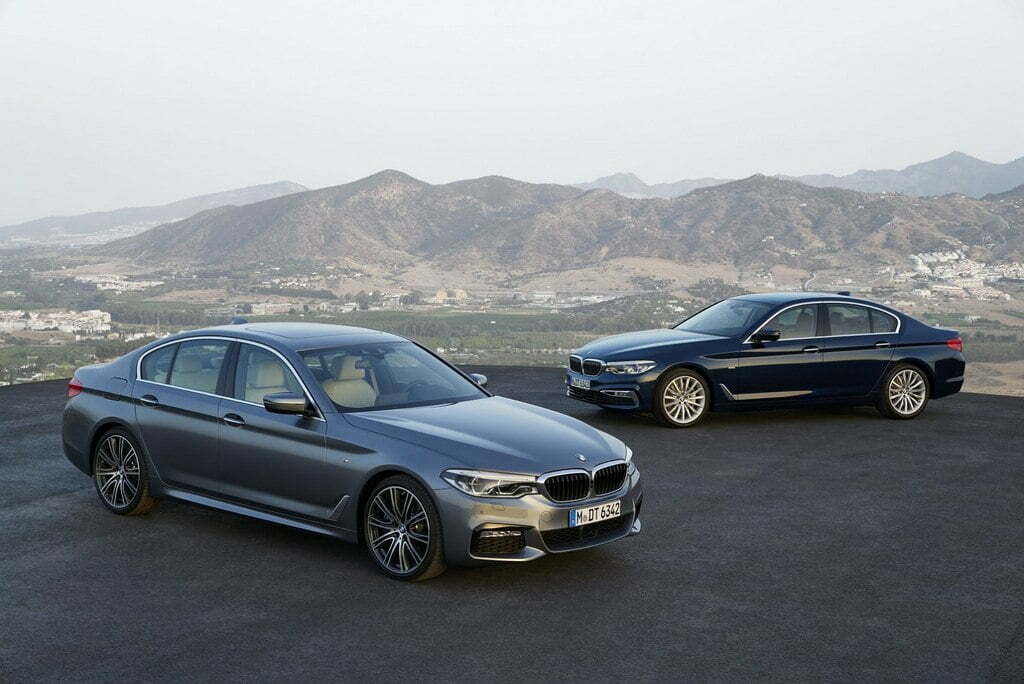 We knew that with the new generation of 5 Series, BMW will be flexing its muscles against the rivals. However, in first look the all new seventh-generation 2017 BMW 5 Series looks more like an evolution. But do not be fooled as appearances can mislead. The 2017 BMW 5-Series, with family name G30 might look similar to rest of the BMW sedans in the market. But ask BMW, and it would tell you that the car is much more than that. It sure does look like a shrunken 7 Series but with more aggression throughout the body design.

The car has striking lines and a wider, lower stance than the car it replaces. Move beyond the skin, and everything has changed. The G30 2017 BMW 5 Series is based on BMW’s new CLAR (Cluster Architecture) platform which uses advanced lightweight materials extensively. Even though the new 2017 BMW 5 Series does not share the carbon fiber parts with the 7 Series, it still manages to shed more than 100kg over its predecessor.

Interestingly, BMW managed to save 70kg’s on the chassis only. The double wishbone front and multi-link rear layout suspension setup remains for this generation as well. However, this time around, there is an expansive use of aluminium, while changed geometry improves handling and comfort further. What you also get are four different versions of suspension on the new 2017 BMW 5 Series. These are standard, sports (firmer) suspension, electronically controlled dampers and for top spec versions, the latter gets active roll bars.

The engine choices arrive in the form of four turbocharged engines for the 2017 BMW 5 Series. The two petrol units are made up of a 2.0 Liter four-cylinder making 248 BHP and a 3.0 Liter inline-six making 335 BHP. The rest are two diesels with 2.0-liter and a 3.0 Liter one. BMW has said that the line-up will yield two more versions, 530e plug-in Hybrid and the M550i XDrive. The 530e will combine electric motor with a 2.0-liter four-cylinder turbo to produce 249 BHP and 420 Nm. It is to be noted that this plug-in hybrid will do a staggering 50 km/l when it arrives. On the other hand, the world beloved M5 is set to become even more insane with a 4.4-liter V8 producing 455 BHP and will run to 100 km/hr in 4.0 seconds dead. This is mainly due to an AWD setup and a scheduled arrival of a 600 BHP M5 in 2017.

The 2017 BMW 5 Series will have rear-wheel drive as standard while the AWD system will be an optional fitting. Other optional system will be the rear-wheel steering while the 8-speed auto will be standard across the range. However, only the 520d will arrive with a six-speed manual. Like every new generation of any car, the 2017 BMW 5 Series has also grown up in size all around. It is 36mm longer, 6mm wider and 2mm taller than the current car. It also features a 7mm longer wheelbase as well. This means an increased boot capacity (530 litres) and better rear passenger room. The dashboard shows of the cars huge inspirations from the 7 Series.

Interestingly, the 2017 BMW 5 Series features autonomous driving tech that enables it to not just follow but overtake other cars as well. The car can also communicate with other BMW’s on roads for a more connected driving experience. It can also understand natural speech for its various voice-operated systems, this feature come to the 7-Series next year. This is not all, the car would be able to park it and if you want, it would search for parking spots as well, this feature is called ParkNow feature.

This time around, BMW will offer M Sport package straight from launch. This includes the Aerodynamic kit that consists of a front apron with larger air intakes, side skirt trim, a diffuser-style rear apron and an exhaust system with two rectangular tailpipes, plus Shadow-line exterior trim, lowered M Sport suspension and 19-inch wheels. BMW will start selling the 2017 BMW 5 Series from February, 2017. The pricing for the car has not been declared yet, but expect it to be priced a bit higher than the current car.