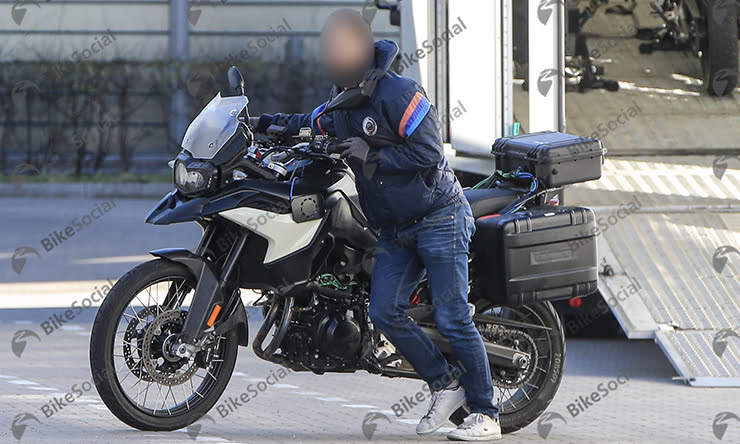 The Germans don’t do 3cc, they bore the cylinder directly to 100cc more than before, 2018 BMW F900GS could do really well in Asian markets

BMW just made its entry into the Indian market and launched their range of vehicles at a very attractive price tags. The enthusiast are lineup for them to have a look or book one. BMW Motorrad has been in the country through private dealers in the past and today it makes it own entry. The manufacturer introduced almost every model apart from some which were missing as we told you in the launch report. The motorcycle that did not make it were the entry level models and one of them was the F800 GS. The motorcycle life cycle was said to be over in the year 2016 and a new one is said to be coming.

Now someone has spotted the F series of BMW Motorrad motorcycles and saying it is a F900GS. We were not getting a great deal in India with the F650 GS because the displacement was 797cc and the law demanded to be over 800cc to skip the homologation part and come into the market and so it can atleast avoid spending money doing the same. BMW has specifically heard Indian enthusiasts prayers and it is finally here, the claimed F900GS. What does it have? We will get you a detailed look as these spyshots give a very clear idea of the heavy changes.

The front design has changed so that includes new headlamps, tank design and that’s about it. Everything from the middle to the rear is mostly functional. There is functional visor with a side cowl on the motorcycle to make it look more sharper. The beak is much more shorter and there are two front mudguards essentially. Dimension numbers will come post launch itself.

Major changes seen are the chassis which is going to be beam type and not the tubular one. The swingarm is all new and the sprocket has been moved to the left side which was opposite in the previous bike. The right side will no house the disc brake which most conventional bikes have. We can see a 21-inch wheel at the front and 17-inch wheel at the rear. Tyre size seems similar as well. The entire motorcycle feel is set to change as the chassis and suspension will be heavily revised.

Mid 2018 launch for our market and slightly earlier in the rest of the world means, there is a bit of wait. Expect pricing to be around Rs. 10-11 Lakhs ex-showroom.

The motor is being claimed to be a 900cc unit and will make more power and torque. However, don’t expect it to be over 100 PS as the R1200GS already makes 125 PS of power. The parallel-twin motor seems to be all new and revised heavily over the previous unit.

We can already see the BMW ‘Ring’ on the left side of the handlebar so you can expect electronics on this motorcycle. Traction control, ABS, riding modes, which will include Sport, Touring, Enduro and much more. Feature list will include fuel-economy parameters on the cluster along with the usual tell-tale lights.