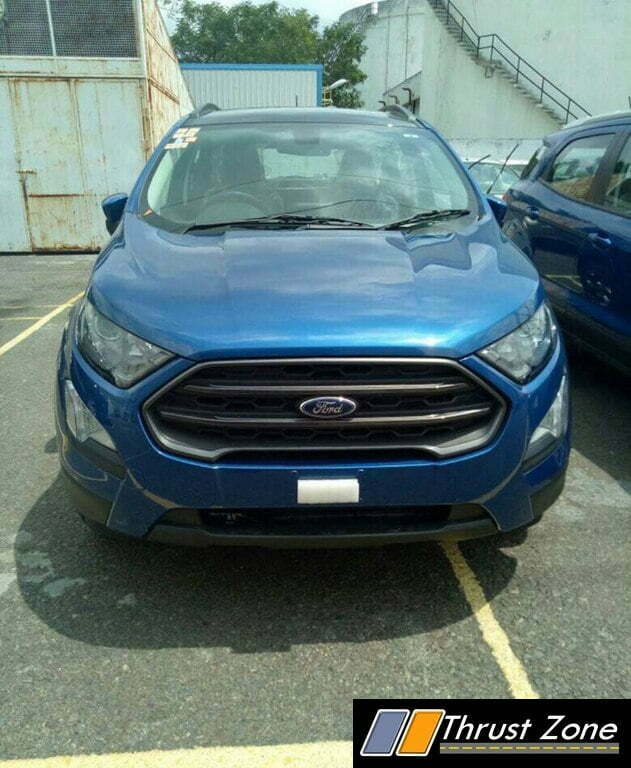 2017 Ford EcoSport Facelift is a substantial update over the previous version and appeals on many aspects, especially the interiors

Ford and its regular updates to its vehicles either engine wise, year wise or let it be recalls, they are in the news for some reason or the other that benefits all parties. Recently Ford added SYNC 3 and Airbags on all variants of the EcoSport. Earlier it announced that the new Figo twins would get touch-screen and it would start with the facelift EcoSport and the facelift comes with several other changes to it. However, today it has been spotted with a brand new blue color which looks stunning.

Design at the front is very butch now, gone is the very alien front now with grille and headlights strictly reminding you of the old Endevaour. The rear remains similar apart from bumper changes and minute changes to the tail-lamps. We will get the spare wheel mounted wheel in India, while other markets won’t. Side profile remains unchanged, but there are new alloy wheels to make sure it looks fresh. The orange and white scheme on this particular car looks interesting and it is a either a hit or a miss for customers.

As we know about the interiors, the centre console now has horizontal A/C vents instead of the vertical ones that the current generation SUV has. The main highlight is the 8-inch SYNC3 infotainment system. This new screen now features Apple CarPlay and Android Auto for smartphone integration. There is now navigation on offer as well. The music system has been upgraded to all new level. There is now a 675-watt, 10-speaker B&O Play system that also features a sub-woofer too. Interior continues to be black, but the orange highlights does make the deal spicier.

The Ford EcoSport Facelift will continue to get all the engine options that it has now. The 1-litre Ecoboost petrol, a brand new 1.5-litre, 100 PS TDCi diesel engine and 1.5 litre naturally aspirated 3-cylinder dragon petrol engine with an manual and automatic dual clutch gearbox, The EcoSport has been facing stiff competition from the Maruti Suzuki Vitara Brezza and the Tata Nexon will add to the worry list as well. Expect a launch by late 2017 and will make sure the compact SUV segment continues to give fresh options to the customer.